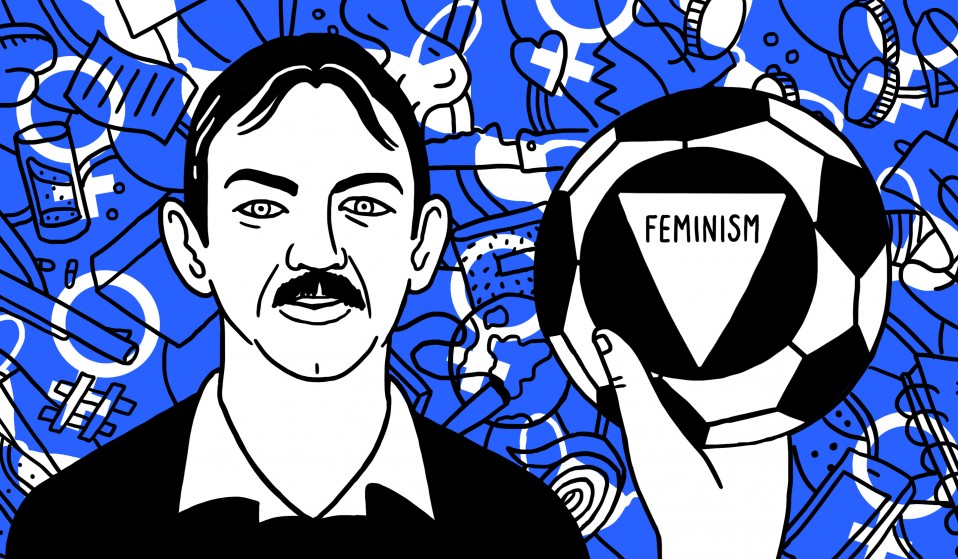 Footballing legend and internet sensation Neville Southall takes on the biggest issues of our time. This week, he wants us all to know you should be feminists.

In his column 'Neville Knows Best', footballing legend turned Twitter sensation Neville Southall takes on the biggest issues of our time. This week, he looks at feminism and women's rights: from periods to equal pay we must do better.

Are women the weaker sex? I was always told to be polite, open doors and give up my seat for women, was this wrong?  I don’t think so, I would like to think I would do it for both sexes. Woman can react in a negative ways to stuff like this sometimes, and I understand why. Women have for a long, long time been treated as inferior by men. But to me it’s not about how strong or how weak I think any individual is, just whether they need a seat more than me. It’s about caring for others.

When I look back at history it never really shows who has kept Britain going. It is men who have taken glory for winning battles and conquering other countries, but behind it all were women who showed great courage, determination, dignity and spirit, even when their say in society was limited.

Today I look at women and think they are far stronger than men because men can have a career and women are still expected to become mums and stay at home – this is work as much as a job.

If a woman wants a career she normally has to juggle work and home life which is very difficult at best of times and the stigma of being a mum and not staying home has grown, but a man can basically do what he likes.

Pay is a problem too, men get more than women a lot of times for doing the same job. This is wrong, the same job should mean the same pay. Top jobs are harder for women to get. I have no idea why, maybe its because they show too much common sense and are not afraid to confront problems, and not just employ their mates.

Women have been the backbone of this country since it began. Whoever called them the weaker sex was obviously wrong they are so strong it’s unreal .

Women have an added pressure compared to men on how they look. Too often people make their minds up on looks not talent. Television has a lot to answer for because they try to push out older women instead of realising how good they are at their jobs and how much experience they have.

Some women can suffer quite badly during their period, but they are expected to just grit their teeth every month and get on with things. I know if a man experienced this he would be moaning and calling in sick. Any tampon tax must be scrapped.

Giving birth, I imagine, must be brilliant, painful and emotional all at same time but it’s the woman who has to endure all dangers around it and then recover fast enough to look after a child.

There’s been an awful lot talked about regarding women’s rights recently. For me, women should be treated equally, and have the same rights as men. I don’t understand why some people can’t get their heads around that.

To me, women should be allowed to do what ever they want with both mind and body – who are us men to dictate what they should and should not do?

They should be able to dress how they want  go where they want and with whom they want. Unfortunately this does not happen, religion, culture and a male dominated world make it very difficult growing up as a woman.

Women have fought hard to win their rights, and now is the time to build on them. When I see how young women are restricted in some places and what males get away with it makes me very angry that they are treated like objects to be used and abused then discarded or even killed.

Women seem to bare the brunt of many bad things in the world today. I think now it’s time to change things and respect and admire them for how strong and brilliant they are

Equality between men and women has a fair way to go, but I for one hope I see it soon as possible.

Linkedin
RELATED ARTICLES
OTHER ARTICLES
Photographer David Corio’s archive offers a glimpse inside a revolutionary era of music and nightlife.
Ahead of the release of their first collaborative album, the producer and rapper talk psychedelics and the state of UK hip hop.
Financial turmoil is pushing people who work in the sex industry into more dangerous and desperate situations as a means of survival.
Yesterday thousands gathered outside Buckingham Palace after news of the Queen’s death broke.
Thousands attended the annual event this year to wheelie through the city and call for ‘knives down, bikes up’.
With skyrocketing rents, packed out viewings, bidding wars and more, renting in London has never been harder.