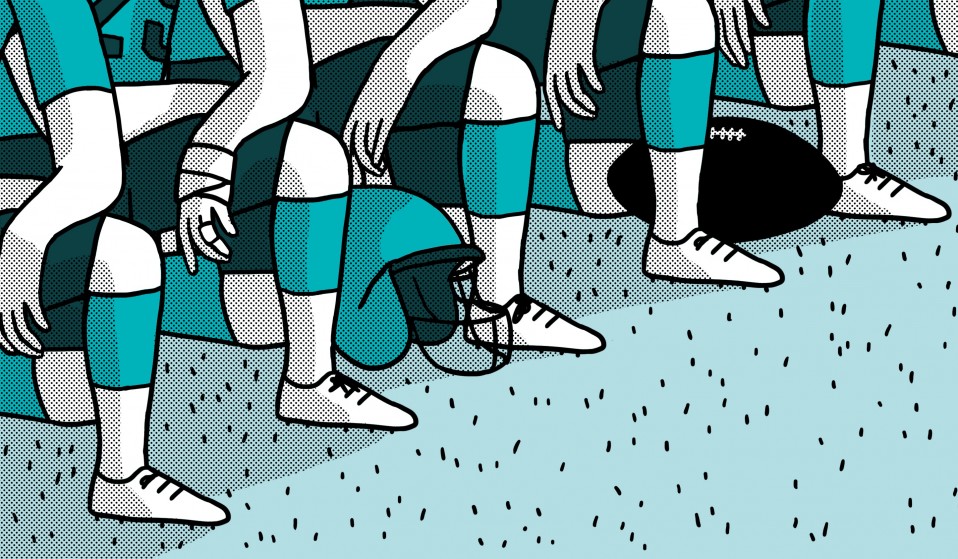 The NFL is finally waking up to issues of race, both in and out of the game. Now more than ever, British football must follow suit.

The NFL is finally waking up to issues of race, both in and out of the game. Now more than ever, British football must follow suit, explains Alex Ross.

Donald Trump has inadvertently forced the NFL’s big guns to acknowledge peaceful protests. On Friday, the President called for “son of a bitch” black athletes who take a knee during pre-match performances of “Star-Spangled Banner” to be fired by their teams. Two days later, more than 200 players knelt before their games – up from just six the week before. A protest against white supremacy and police brutality that started 18 months ago with Colin Kaepernick has finally reached a critical mass, and the NFL’s owners – many of whom donated to Trump’s election campaign – have found themselves with no choice but to back their players.

This wasn’t supposed to happen. The NFL is a deeply conservative organisation; its sickly shows of patriotism are paid for directly by the US military. When players talk about race or injustice, they are branded as a “distraction,” or as ingrates selfishly disrupting a team’s “unity.” But, as Philadelphia Eagles safety Malcolm Jenkins told The Ringer’s Kevin Clark, “It’s only a ‘distraction’ when one or two guys are speaking out. When all of a sudden you have a majority of a team speaking on one issue, it’s no longer a distraction: It’s a priority for that team.”

It didn’t feel at all strange that the tone of Sunday’s quiet defiance was set at London’s Wembley Stadium, which hosted the day’s first game between Jacksonville and Baltimore. With similarities in the rise of right-wing populism on both sides of the Atlantic, and a shared lust for demagoguery, Britain and the US have in some ways never felt closer. Yes, the protest that Kaepernick has started is specifically American, one set against a history of injustice from slavery to segregation to swastikas in Seattle. But Brits can take no smug satisfaction in a country where racial inequality remains entrenched and the number of hate crimes continues to rise.

We only have to look at our own national sport for proof. English football is mired in two very public issues of entrenched racism right now. Just last month, news broke that England international Eni Aluko had accused her Lionesses manager, Mark Sampson, of racist and prejudicial remarks. Sampson, according to Aluko, pulled out a vile joke about Aluko’s Nigerian family “bring[ing] Ebola” from Nigeria back in 2014. A year later, Aluko says, Sampson tried to get a laugh by asking a mixed-race England player how many times she had been arrested. Sampson was sacked last week over a separate incident that predated his England tenure.

If Aluko’s claims were troubling, the response was upsettingly predictable. Aluko accepted that she’d never be selected for England again, despite being the Women’s Super League top scorer last year. Gareth Southgate, the England men’s team manager, said that he had “no hesitation” in calling Sampson an “excellent character.” Then, in the Lionesses’ last international fixture, England’s players celebrated their first goal by celebrating with Sampson to show that they were “united,” despite the accusations against their coach. Aluko says that the England Women’s team has “systematically dismissed certain players” after coming forward in the investigation over a “toxic environment.”

Colin Kaepernick, who remains unemployed as a result of his protest, would understand.

At Old Trafford this weekend, a group of Manchester United fans once again continued to sing about the size of Romelu Lukaku’s penis. It’s a song that anti-racism group Kick It Out described as “offensive and discriminatory”, and that Lukaku himself has asked fans not to sing. The song is idiotic – like Sampson’s exhausting Bernard Manning impression, it works from a played-out stereotype and ends up as shit joke.

But the reaction to it has been more telling than the song itself. Spiked editor Brendan O’Neill, a lazy reactionary masquerading as a provocateur, wrote about the Lukaku chant on Sunday. “‘Anti-racism’ is a cover for expressing contempt for working-class fans,” he wrote, in a remarkable feat of woke gymnastics. Later, he boiled his point down: “The truth is that racism has disappeared from the game.”

O’Neill believes that English football is a rainbow utopia now that black players aren’t routinely taunted with bananas on the touchline. He joins a rich tradition. In 2011, then-FIFA president Sepp Blatter was asked if there was racism in football. “I would deny it,” he said. “There is no racism.” In 2014, then-Chelsea manager Jose Mourinho told the press that “there is no racism in football,” claiming that the sport was, structurally, a perfect meritocracy. Today, of the 92 managers in the Football League, three are black.

A 2014 study at the University of Loughborough showed that 83 per cent of fans surveyed thought that “racism has never left British football.” The researchers concluded, however, that the authorities had essentially declared “Mission Accomplished.” The game, they wrote, had become “colourblind.” Without acknowledging the racism in the sport – as in society – we can’t seriously take steps to eradicate it.

It’s taken a long time, but those at the top of the NFL are, in their own confused and self-serving ways, being forced to acknowledge racism, both in and out of the game. Now more than ever, English football could learn from the courage of the players who took a knee, and the one man who sacrificed his job to start the process.

Linkedin
RELATED ARTICLES
OTHER ARTICLES
With the virus now a global health emergency, we must take steps to fight misinformation and demand a swift UK-wide vaccine roll out, writes Phil Samba.
Yesterday, rail workers came together to protest poor pay, working conditions and job cuts in their latest round of strikes.
From the chip shops, to the bingo parlors and burlesque dancers, photographer Mike Coles remembers capturing scenes of holidaymakers by the English coast.
Photographer Anne-Marie Michel captures the women who through determination and strength are forging their own way in a male-dominated industry.
A series of photos by the late Jerry Dantzic taken in 1957 show a tender side to the iconic Jazz musician.
The Conservative leadership contest has exposed an obvious truth: whether our next prime minister is a woman, or a British-Asian man, they will continue to fan the flames of division.