News & Politics / Opinion / People are buying Mein Kampf: Should we be panicking? 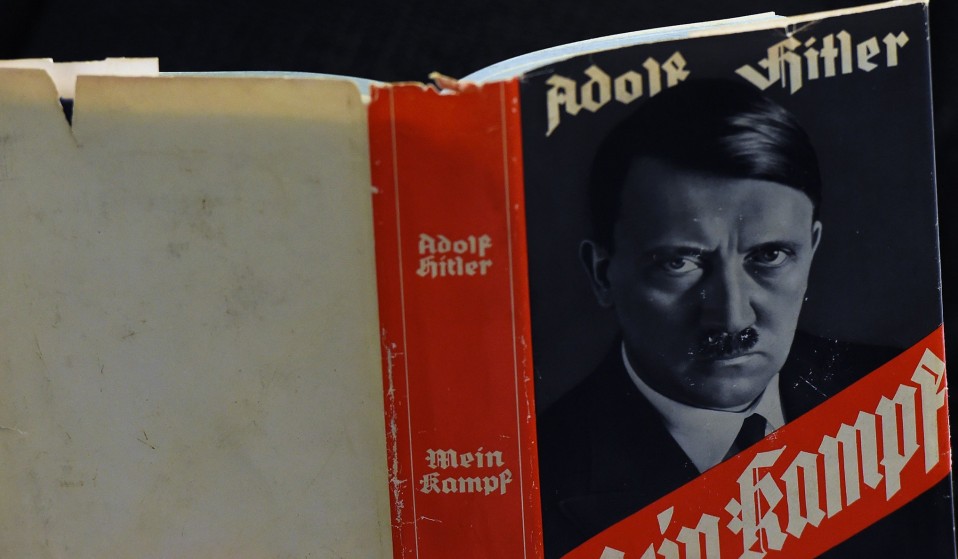 Hitler's hate-filled book Mein Kampf has sold far more copies in Germany since republication than expected. Forget about the sales figures says James Butler, a quick flick through the pages highlights alarming parallels with the rise of the far-right today.

A new edition of Mein Kampf – Hitler’s autobiography, which outlines his racial ideology and was banned from publication in Germany after 1945 – has sold out its recent print run, and far outstripped expected sales (which have reached 85,000, after an initial print run of 4,000 copies).

The new edition, put together by the German Institute for Contemporary History (IfZ), situates and analyses Hitler’s text with a critical introduction and extensive notes, and was born out of a fear that after the expiration of the copyright held by the Bavarian state, the market could be flooded by approving Neo-Nazi or simply uncritical versions of the text. Should we be worried about a demand for Mein Kampf, in whatever version it appears? Or does this book have something to teach us about our own times?

Although Bavarian authorities were initially reluctant to see Hitler’s text republished, the IfZ suggests fears that it could be seized on by the far-right in a spasm of Nazi revivalism were misplaced: instead, it suggests that data on purchases shows that buyers are just people interested in history and politics generally. That seems likely: genuinely committed fascists have had copies of the book in samizdat circulation for a long time, even before the rise of the internet made it much easier to circulate banned texts.

The point of censorship, then, was less to prevent its circulation in the hands of fascists than it was to excise Mein Kampf from the public sphere, disown it utterly, and put it beyond the pale of public acceptability.

In an age where censorship is no longer the regular prerogative of the state, to ban a book is to say ‘this book and its contents are not like other books, and cannot be considered in the way they ordinarily are’. It is to acknowledge its place in history, to say, this book is dangerous.

If such an attitude is understandable in Germany – where the book was a chief symbol of the Nazi regime, given by the state to newlywed couples as a wedding gift – it is hard not to be persuaded by the IfZ’s argument that a critical edition might serve to strip the text of its glamour. The step after rejecting Nazi ideology is to look it unflinchingly in the face, and understand its appeal, where it came from.

Even if one does not share the practice or politics of censors, there is something in the instinct towards censorship which is instructive. The censor is the last great believer in the power of literary art to affect its readers, to allure, mesmerise, excite or persuade them. Censorship proceeds from the belief that a book might change people, and change them for the worse.

Compare this to the idiot laziness which assumes no book (or play, or artwork) can ever really matter, because liberal values are final and unchangeable, and so one reads things merely with a detached curiosity incapable of alteration. To allow that we can be changed or fascinated by a book – even, perhaps, a terrible book, proximate to great evil – is not to cede to an argument for censorship, but for a renewed and rigorous criticism, the ability to read seriously.

If we experience a twinge of discomfort at news that Mein Kampf is selling thousands of copies, it might be because we feel – even if braced inside a critical framework – the text might still prove alluring. It suggests how far away we are from really understanding the rise of Nazism, how far we treat it as an inexplicable evil: despite the huge market in second world war books and documentaries, it is still regarded as an aberration in history, an exercise in mass unreason.

Yet to open Mein Kampf is to find, above all, the boring and repetitive screed of a narcissist, volley after volley of self-valourising tantrum. The contours of the Third Reich are visible in the book: its extended passages on the racial inferiority of Jews and the danger of Bolshevism are very obvious, so too its vision of an Aryan Empire stretching across continents, united in ‘manly’ virtues and obsessed with war.

As Orwell noted in an early review of the book, the monotony of of Hitler’s obsessions, and his vision of an Empire of Permanent War, are hardly sufficient to account for its wide appeal. Some of it may well have been from the sheer force of Hitler’s personality, which seeps through the book’s clumsiness, insistent and obnoxious.

But, as anyone who studies the lives of bestsellers knows, most copies sit unread, purchased as often for the aura and symbolism of the book itself, and what it says about its buyer. Mein Kampf was published with a full-page, doe-eyed, soft-focus photo of its author – whose ‘struggle’ spoke to the humiliation and resentment felt by ordinary Germans as their state tottered and decayed around them.

The book’s wild oscillation between the pathos of Hitler’s struggle, and its wild insistent naming of the enemies – Jews, Communists, one and the same – are part of an alluring narcissism which promises it can excise all foreign corruption, and Make Germany Great Again.

If Mein Kampf has something to tell us about the surge of the contemporary far-right, it is along those lines. The new authoritarian populists don’t come waving swastikas, but they do come telling us that all our humiliations and failures have a name, an explanation and a face – sometimes brown, sometimes veiled, sometimes black, sometimes left-wing – and that the route to our salvation is through their removal.

They encourage ultra-identification with a leader beset by a conspiracy of sinister establishment forces. And the history of Mein Kampf can tell us another thing: early English editions removed many of its worst racist passages, and press reviews tended to discount the long sections on enemies as unlikely ever to amount to much in reality. Take seriously what such people say about their enemies: they mean it.

Linkedin
RELATED ARTICLES
OTHER ARTICLES
Whether it's partygate, the climate crisis or the spiralling cost of living, the fightback begins on the picket lines writes Tommy Vickerstaff
Photographer David Hoffman recalls documenting the extreme wealth inequality around Tower Hamlets and Hackney int the 1980s.
Finland-born photographer Sirkka-Liisa Konttinen looks back on her decades-long documentation of life in Northern England.
A new edition of a seminal book brings together iconic images of the band onstage in their full glory and backstage in moments of unguarded camaraderie.
50 years since its inception, and the campaign calling for recognition that capitalism depends on domestic labour is as pertinent as ever.
With inflation now at a 40-year-high of 9 per cent, demonstrations organised by TUC took place to demand action from the government.