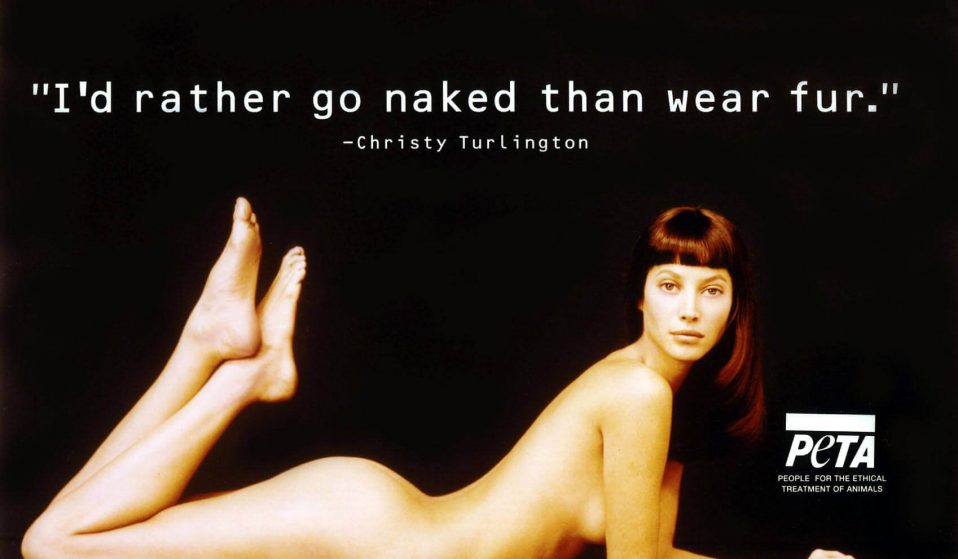 The animal rights organisation came under fire this week for putting speciesism on par with racism and homophobia. Considering their history of publicity stunts, the headline-grabbing should come as little surprise.

The animal rights organisation came under fire this week for putting speciesism on par with racism and homophobia. Considering their history of publicity stunts, the headline-grabbing should come as little surprise.

“Ridicule is nothing to be scared of,” sang Adam and the Ants in 1981, a year after PETA was founded – and it’s a lyric the animal rights campaigners have seemingly taken to heart (though one wonders what they’d think about the subjugation of ants, dressed up like frilly-shirted pirates, doused in makeup and eyeshadow and made to perform for hours on end for our amusement.) In PETA’s world, anything is permissible if it creates enough reaction. No publicity is bad publicity, and the Virginia-based nonprofit corporation has become a master player in the kind of media manipulation that would make Vladislav Surkov blush.

It can be an eye-catching stunt, a model in a battery cage or Alicia Silverstone’s bare buttocks that grab your attention. On Tuesday night, it was a tweet. PETA seeks to eradicate speciesism from modern discourse by suggesting we update common idioms that feature animals. Some suggestions were helpfully provided in a glossary. So instead of saying: “kill two birds with one stone”, one should say, “feed two birds with one scone”; instead of “be the guinea pig”, say, “be the test tube”; instead of saying “take the bull by the horns,” say, “take the flower by the thorns,” and so on.

There’s a lot to unpack here, though if there was any equivocation, PETA spelled it out with a follow up tweet: “Just as it became unacceptable to use racist, homophobic or ableist language, phrases that trivialise cruelty to animals will vanish as more people begin to appreciate animals for who they are and start ‘bringing home the bagels’ instead of the bacon.” Twitter unsurprisingly responded with collective derision, and it even caused Gary Lineker and Piers Morgan to beef about it. At the time of writing, PETA’s pinned tweet has been retweeted over 12,000 times, with 33k likes and 44k comments. Job done.

“Ahh PETA,” grumbled a friend of mine a few hours after it had begun to widely circulate. “Looking forward to this being my opinion tomorrow at work, as the office vegan.” As a feckless vegetarian myself, he has my sympathy. Recent data showed that people who identify with either dietary group collectively make up more than three million of the UK’s population; somewhere in the region of five per cent of the total population. But that doesn’t mean that abstention from eating dead flesh is still not regarded as a fringe activity by many. PETA, non-violent extremists and enemies of nuance, are so successful with their absurd publicity stunts that we herbivores are often left feeling deeply embarrassed by it all. It also ultimately compounds the stigmatisation of non-meat-eaters, though PETA founder Ingrid Newkirk would surely consider that discomfort a small price to pay if her message is getting through. If it’s a war of ideas then PETA has no compunction committing ideological war crimes to get your attention.

Words matter, and as our understanding of social justice evolves, our language evolves along with it. Here’s how to remove speciesism from your daily conversations. pic.twitter.com/o67EbBA7H4

“We are complete press sluts,” she told the Guardian in 2003. “It is our obligation. We would be worthless if we were just polite and didn’t make any waves.” It’s a similar strategy to that employed by the former Smiths singer Morrissey, though the less said about him the better. PETA boasts 6.5 million members and claims to be the largest animal rights organisation in the world. Much of that infamy came from hyperbole, idiocy and, though the organisation was founded in 1980, fake news. “Peta’s publicity formula – 80 per cent outrage, 10 per cent each of celebrity and truth, insures that everything it does offends someone,” wrote Michael Specter in the same Guardian article. PETA are propagandists first and foremost, and they no more represent most vegans or vegetarians than the Islamic State represent most Muslims.

Some of PETA’s greatest hits include hijacking a Victoria’s Secret catwalk and unfurling “fur scum” banners at Gisele Bundchen; writing an open letter to Ben Affleck explaining that the chinchillas used to make the fur coat he bought JLo were electrocuted by the genitals (he publicly apologised and gave the organisation a large donation); Chrissie Hynde getting herself arrested for slashing leather in a New York Gap; and the trolling of Colonel Sanders’ Louisville grave, with another headstone placed next to his with bright red letters reading “KFC tortures birds.”

Tittersome though some of these stunts might be, the fat shaming adverts and all the yawnsome celebrity skin ads are less so. And then there was that time PETA promised to step in and pay the bills of 10 households in Detroit after the city cut off water to thousands of households with overdue arrears topping $90 million. The catch? The 10 lucky residents would have to go vegan for a month. “Oh my god. Fuck off, PETA,” said Jezebel at the time.

Ironically in the supposed age of fake news, PETA’s bludgeoning approach, though headline-grabbing, is becoming outmoded. People are more conscious about the damage farming has on climate, about the hegemonic stranglehold of big corporate factory farms and the implications on health. The organisation’s crankery can actually have a negative effect on those thinking about taking the next step. Though in a world where supposed civilised parliaments like our own reportedly choose not to transfer EU recognition that animals are sentient and feel pain (if Brexit happens), then maybe PETA feels it has no choice but to play dirty.

Buried somewhere deep in that tweet on Tuesday was a truth that has been ignored in all the noise about speciesism being on par with homophobia or racism. It is true that our culture is set up in a way that makes eating meat easier, enabling the kind of cognitive dissonance that sees a nation of dog lovers eat 80kg of dead animal a year (per person); a culture where we’ve been conditioned to see certain animals as friends and others as lunch (though this might be turned on its head in a number of Asian countries). Ours is a weird infantilising culture where cute cartoon pigs adorn butcher’s shops, and nursery rhymes feature twisted imagery that inculcates us early (I caught myself singing “this little piggy had roast beef” to my son, which, when you properly think about it, is fucked up). Animals, we’re taught, are complicit in their own deaths because it brings them pleasure to see us happy – but that’s certainly more tricky to convey in a tweet than suggesting people say “feed a fed horse” instead of “beat a dead horse.”

If ridicule is nothing to be scared of, then sex sells is another maxim PETA lives by. It runs an annual sexiest vegan contest, which in the previous decade was a sexiest vegetarian contest (some may regard this rebranding as progress). I interviewed Perry Farrell of Jane’s Addiction in 2009 a year after he’d been nominated for world’s sexiest vegetarian, some feat considering he looks like a beatnik Uri Geller. Farrell was chomping on something over the phone and I asked him what he was up to.

“Oh I’m just laying around eating chicken wings before the show,” he declared. Farrell had hitherto been a vegetarian for 20 years, but his head had been turned when his wife started to crave meat during pregnancy. On a bachelor party to Brazil, he relented. “Have you ever been to Brazil?” he asked, excitedly. “There are these places that you go where they walk around with these great sticks of meat that have just been roasted, and I was with all my friends and I couldn’t resist! My salivation glands started to go crazy! I asked a guy for a piece of meat. I ended up eating in there for about three hours just gorging myself on meat.”

It’s an image that’s stayed with me, PETA’s sexiest vegetarian runner-up of 2008 lying on his back in Brazil gorging on sticks of roasted chicken for three hours. It’s a scenario that embodies the empty, sensationalist, celebrity-driven propaganda that gets piped out of PETA’s 400-person strong offices from around the world. But PETA will have long moved on from the “Nothing’s Shocking” singer’s poultry lapse. There’s plenty that’s still shocking, and often enough it’ll be thrust at you from a billboard signed off by Ingrid Newkirk.

Linkedin
RELATED ARTICLES
OTHER ARTICLES
Photographer Bud Glick recounts documenting everyday life in the area, and what it taught him about the Chinese immigrant experience.
Students are being left to languish in unsafe housing, in some cases leading to serious health complications.
From the chip shops, to the bingo parlors and burlesque dancers, photographer Mike Coles remembers capturing scenes of holidaymakers by the English coast.
Following the release of his latest album, the rapper talks about finding a new approach to songwriting, attitudes to poverty, and why his music is more than a political statement.
A sharp increase in officers armed with the electrical weapon is resulting in serious injuries and deaths.
In the latest instalment of Photographers in Conversation, the creator talks portraiture, platforms and taking inspiration from Little Simz.