News & Politics / Opinion / To be truly inclusive, Pride must solve its identity crisis 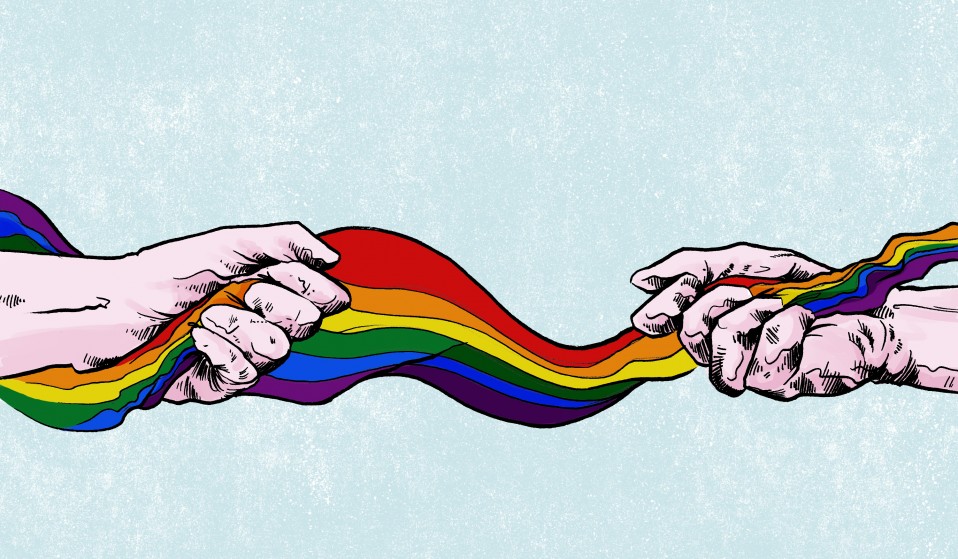 On both sides of the Atlantic, the LGBTQ+ community is divided about the purpose of Pride celebrations in 2018. Justin Myers (aka The Guyliner) explores why.

On both sides of the Atlantic, the LGBTQ+ community is divided about the purpose of Pride celebrations in 2018. Justin Myers (aka The Guyliner) explores why, and offers a solution to the community's widespread discontent.

Sometimes the term ‘LGBTQ+ community’ can feel like a misnomer, because we do love a good old scrap. It’s a hangover from all those little letters you can see in the name, you see; while the straight world at large sees us as one huge monolith of rainbows and mouthiness, we’re only too aware of our differences.

A mutual characteristic of oppression brought us together, but as the community diversifies, acceptance increases, and needs differ. The things that separate us are intensified. This is why we can be difficult to please – it’s not to say that we’re awkward, or fussy, but we are very protective of our stories, our existence and what it means to be LGBTQ+. We call out misrepresentation, fight back against those selling us out or abusing our trust, and we are pretty much famed for not taking any more crap.

Pride – as a movement, a parade, or even just a sense of worth – is something many of us feel we own. It means different things to all of us, and only serves to disappoint us when others don’t understand or cater for our interpretation. It’s a continual, evolving controversy, and during Pride Month, falling every June, and the ensuing Pride festival seasons throughout the summer, we are hyper-sensitive, primed to bat away anyone looking to spoil our fun, despite our own complicated relationship with it.

Pride began as a staunchly political demand for visibility, equality, and representation. It has gone through many regenerations, usually reflecting contemporaneous societal changes – and almost all of these remain visible in its genetic makeup today. There was a period of rallies and marches, sit-ins and campaigning, demanding sexual acceptance, rights, freedom. There is a whole generation for whom Pride is a celebration of unbridled hedonism, with huge pop concerts featuring gay-friendly divas. For some, Pride is a means to demystifying kinks, to show the world at large there is nothing shameful about how we have sex.

Many see Pride as a celebration of inclusivity – the irony of this not lost on some – and want to make it a state of mind rather than about sexuality, involving straight people, huge corporations, and organisations, to show that we’re as good as everyone else. And there are those who hate it, be it that their permutation of Pride is no longer the “agreed” version, or they preferred the old days or, sometimes, they think it’s a load of rainbow rubbish that doesn’t speak to them at all.

While Pride is no stranger to attracting criticism, justified on occasions too numerous to list, there can be a kind of  forcefield around it. Protectors are keen to head off detractors, often gaslighting them into thinking criticism of a festival or ethos that claims to push LGBTQ+ equality is anti-LBGTQ+ in itself, or makes you a bad ally or, the most 21st century dismissal of all, that you are “determined to be outraged”. This is the cruellest trick of all, really, as this kind of rhetoric was used by homophobes of yore keep us down. And now, like a horror movie, the call is coming from inside the house.

The LGBTQ+ community has always been diverse, and early Pride marches and events will have reflected that, but those members who don’t fit into the mainstream have found themselves pushed even further to the periphery. Meanwhile the main focus of Pride became a writhing mass of rainbow-clad bodies and unicorns. Perhaps it’s a result of the virulent homophobia of the 1980s. In the UK, Section 28 banned the promotion of homosexual relationships in schools, and in the US, the New York Times’ sensationalist coverage of the AIDS crisis depicted gay men as HIV-spreading degenerates and led to the formation of GLAAD – the Gay & Lesbian Alliance Against Defamation.

Lesbians were lampooned as man-hating, militant funsponges desperate to adopt your children. The start of the rehabilitation of the gay community in the 1990s, with cisgender, white gay guys cuddling up with a puppy becoming the default, “acceptable” face of gay men – plus the mainstream’s discovery of lipstick lesbians thanks to Anna Friel in British soap Brookside and secondary Friends characters Carol and Susan – leaving those on the fringes feeling even more isolated. If you were young, white, and a heterosexual person’s idea of fuckable, it seemed, a sense of belonging was available to you. For everyone else, it was either evolve, die, or rebel. It’s more than not feeling you fit in at a gay club because you have a beer belly or a wonky nose – whole swathes of the LGBTQ+ community were being cast aside because it was assumed that their needs matched everyone else’s.

So what is Pride now? It’s increasingly hard to define, an reflection, in many ways, of the LGBTQ+ community itself. As the political landscape morphs into one of extremes, so too are we. Many saw the marriage equality victory as a Series Finale rather than an Act One, and are ready to party and enjoy their freedoms, while just as many know there is a lot more work to do. What is clear is that Pride isn’t necessarily catering to these people – how else can we explain the peeling off of those marginalised by the main event. The Black Pride festival and movement in London grows every year, Brighton will hold its sixth Trans Pride weekend in the city this month, and in the States many major cities host a separate Black or Trans Pride event. This may feel like progress, and the recognition of minorities; in reality it only highlights the yawning chasm in provision in the “main” Pride celebrations. This year Stonewall, the UK’s largest LGBTQ+ organisation, walked away from London Pride celebrations.

As US journalist Phillip Henry, in his excellent piece  for LGBTQ+ platform Them, ‘Proudly Steeped: Pride Is Still an Elitist White Gay Fantasy’, explains: “Having Black Pride is such a healthy and fun experience, because our identities as Black queer people positions our relationship to queerness differently than it does for our white counterparts. [However] having Black Pride is no excuse to allow the lack of inclusivity of pride events to prevail, because if Pride is truly for all queer people, then Black people shouldn’t need to organise separate events to feel included in it.”

In the UK, Pride events out of the big cities seem to get this; they have smaller audiences, underrepresented communities, and limited corporate funds, and they know inclusivity is key to their survival.

There is a tranche of the community who’d rather have a quiet life and just get on and enjoy Pride, and in a way it’s understandable. Usually their life is just as they want it, a bubble where homophobia is someone else’s problem with only sporadic reminders. A kind of rainbow NIMBYism, perhaps, that would much rather not rock the boat in case the straights come knocking asking for their rights back. This is how you get tone-deaf ad campaigns from huge corporations who think slapping a rainbow on their logo means they’re doing their bit, or the collective sucking-up to “allies” – straight people displaying the bare minimum of decency – by means of #LoveisLove hashtag activism, or waving from the front of a float to a sea of identical faces.

Pride is suffering an identity crisis, as we all do at one time or another. If we can’t agree what Pride should be, surely we can all get behind the fact every voice is valid, whether it’s critical or celebratory. The truth is Pride can be a force for good, but must take us all along with it, and acknowledge its history, why it’s here, and its problems. Pride was born out of necessity, frustration, and oppression. We can still party the summer away, we can still celebrate, we can reclaim that sense of urgency and power, that fearlessness, and steer it away from the straight gaze. Can’t we? Shouldn’t we?

Nobody’s out to spoil the fun, but if Pride is to be inclusive, it needs to start with the people who need that inclusivity most, at the outer reaches of the community, and draw them in – that’s how it works, otherwise we’re preaching to the choir. Only then can we live more freely, hold our head up high and truly be Proud.

Linkedin
RELATED ARTICLES
OTHER ARTICLES
Cindy Campbell recounts how her brother ushered in a new era of musical culture at a party she held in the Bronx in ‘70s.
Sean Maung’s photos are a love letter to the Black and brown communities that make up New York.
A 37-year-old woman shares how her abortion led her to become a clinic worker, and the abuse she’s received in that role.
The two-day long event returned to London this year, showcasing a spectacular parade, steel bands and Caribbean food.
For over a decade, gamblers have won big by employing people to place live bets from the court. But does this dubious method still work?
A group of young Palestinians have found temporary freedom in the act of parkour, reimagining wreckage and ruins as a series of high-octane playgrounds.