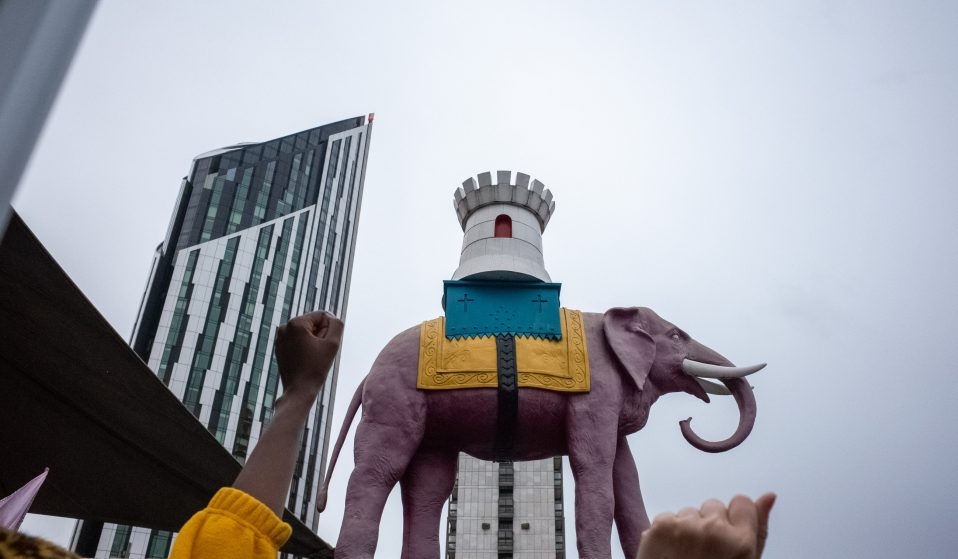 After the demolition of Elephant and Castle shopping centre, writer Kieran Yates reflects on what we lose when we lose our buildings.

After the demolition of Elephant and Castle shopping centre, writer Kieran Yates reflects on what we lose when we lose our buildings.

A few years ago, I lived in a tiny box room for a few months with some friends off the Walworth Road in south London, where you could hear the crash of demolition at any point during the day. The victim, at that time, was the mighty Heygate Estate, which once provided homes for more than 3000 people, who are now dispersed across the UK.

The horizon shifted every day as homes fell away and were replaced with cranes. At night, I would dream about them, as transformers in the darkness, gleefully smashing these homes; Optimus Prime controlled remotely by an estate agent. I heard the crack and groan of copper railing in walls coming down, balconies resisting the onslaught, and I would dream of things falling down around me.

The psychological toll of demolition is not something that has been researched abundantly, beyond the idea that we know that proximity to demolition incurs anxiety, depression, and paranoia, and that any sustained noise is considered pollution, or ‘anti-social’. But what about beyond noise, when you know that communities have nowhere to return to? That their childhood homes will never exist again in the same way?

When I recall interviews I’ve conducted with conflict refugees, about homes that no longer existed in the countries they called home, they would mention coping mechanisms. Many explained how they would imagine on maps where homes used to be, stretching imaginations and defiantly reminding each other, so their valuable memories would not be lost.

Many of us who have lived in precarious housing, or who have sought sanctuary in places like shopping centres to gather, or watched the estates they grew up in crumble around them, feel this sense of loss acutely. When my estate was extinguished by cranes, I was too young to realise how much it would spike my sensitivity to similar stories I would encounter later in life. You develop a reverence for bricks, to seemingly lifeless blocks of dried clay that hold up places that we call home.

Those in inertia, passive to the landscape of the cities we live in, assume that these places will exist forever. People who know to look up, who have felt the unchecked mania of property developers first-hand, that devastate areas with reckless abandon, know that this is not true. 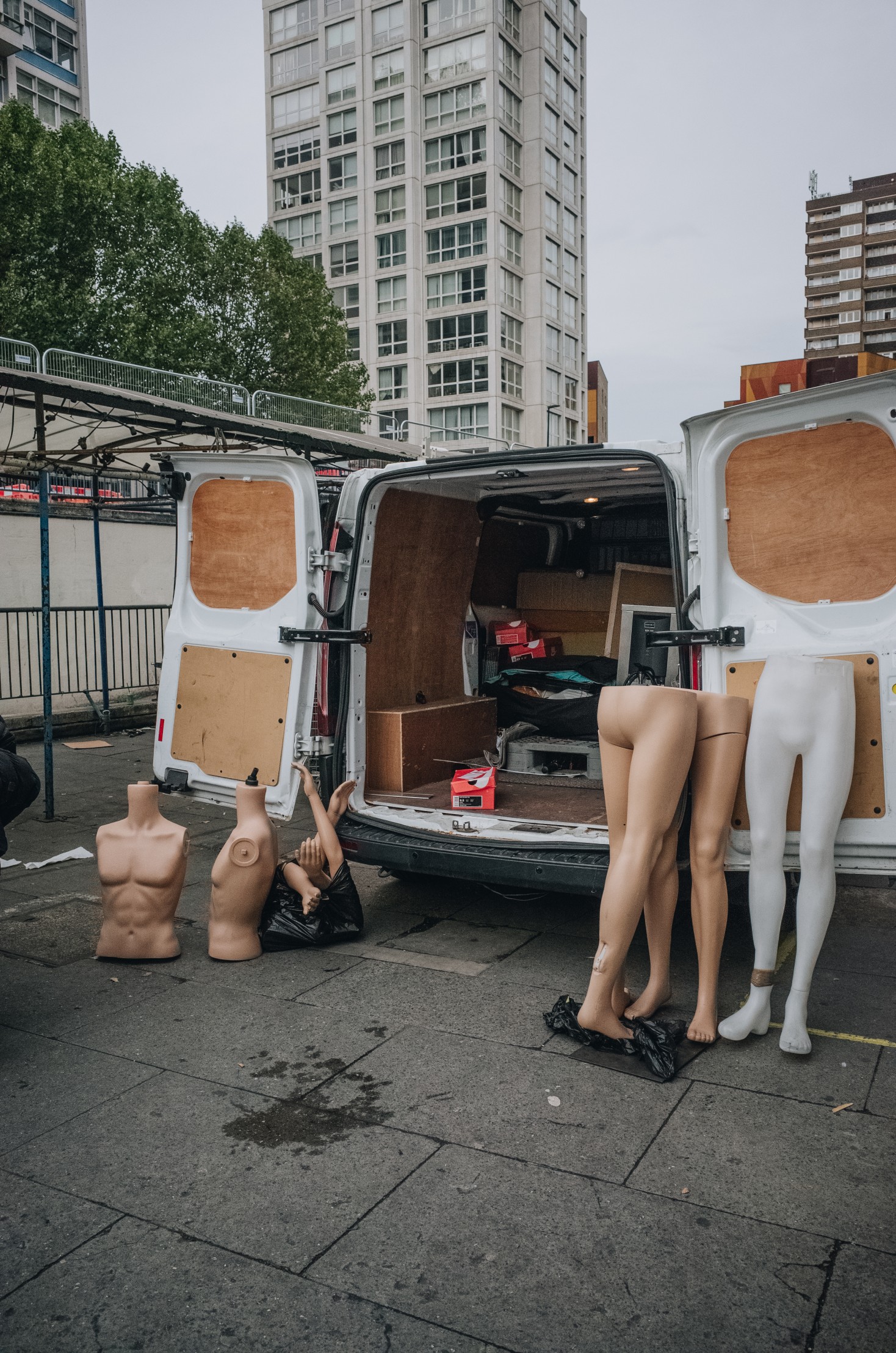 I became familiar with Elephant and Castle shopping centre, Europe’s first indoor shopping mall, in 2007, living in south London and studying, and subsequently teaching, journalism classes at the London College of Communication. Over the years, I would wander around it, eating hot popcorn from a stall, getting shushed by aunties at bingo, or buying a waist trainer from Maria in a second-floor rental unit for £30 after internet propaganda convinced me I could alter my shape. Instead, it made my middle hot and maddeningly itchy, a smell of rubber following me wherever I went like a cheap doll.

The waist trainer didn’t last, but months later I went back to her for white Spanx. When I hoisted them up over my thighs on my wedding day, I thought of her shrill beam of joy when I told her my intention for them.

Last year, I visited as a reporter, speaking to locals following news that the centre – home to a predominantly working-class Latinx American community – would be demolished by property developer DeLancey. This was to make way for a now-familiar brand of gentrification: a ‘town centre’ complete with new rental units, high-end residential towers that would displace a number of traders, and wreck livelihoods.

The people I spoke to had much at stake: among them were Suleyman Garip, who has sold popcorn and light, feathery candyfloss at his stall for 13 years, and Justin from Café Castillo, who spat anger at the property developers over fresh orange juice.

I spoke to Mateo Quintero, from Distriandina – a restaurant and club opened by Quintero’s father in 2002, after arriving in the UK in the ‘90s from the coastal regions of Colombia. Amongst painted murals of musicians Marco Antonio Solis, Juan Gabriel, Vincent Fernandez, and Ana Gabriel, Quintero described how a new development would mean closure for them. Cesar Sanabria, a local patron, between bites of his frijoles Colombianos, interjected, explaining that he had been coming to Distriandina for lunch for six years. “I come here pretty much every day to chill,” he smiled. “What we have here is like a little island”.

Last year, when the plans for demolition by property developers put these ‘islands’ in jeopardy, campaigners sought to protect a community reliant on the shopping centre. At one meeting at Draper Estate’s community centre, organised by the Latin Elephant and 35% Campaign, people discussed how to be in solidarity with traders, and push plans for more social rented housing (of the nearly 1000 homes to be built, only 116 will be council housing, up from the initial proposal of 33 that activists pushed back on). Traders like Mehmed mapped out the reality for him and his peers (40 traders, campaigners say, are still awaiting relocation at the time of writing), Up the Elephant! activist Jerry Flynn detailed the legal fight, and locals agreed to print flyers. 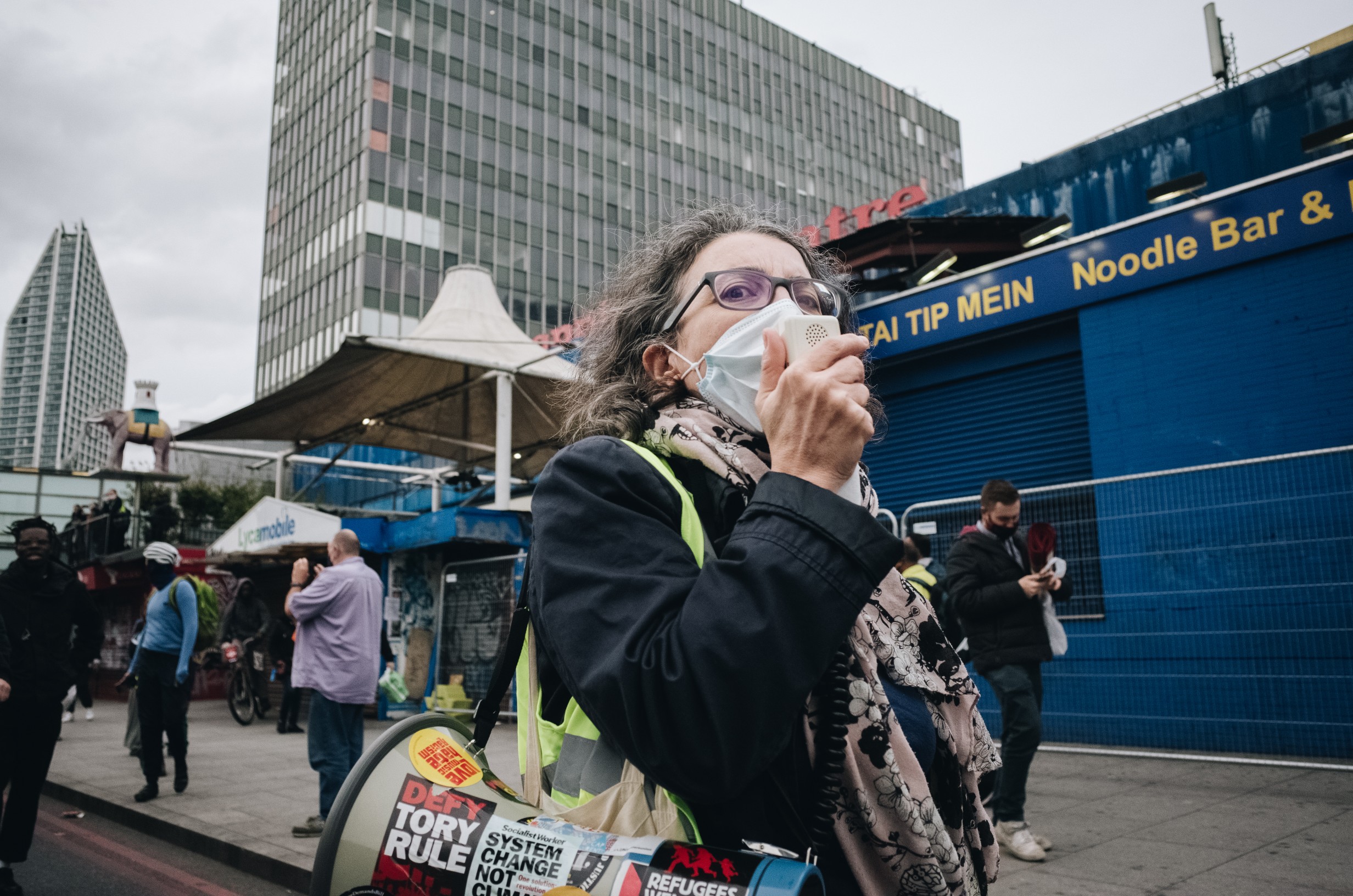 At another meeting, a few months later in the shopping centre, we gathered in a circle of a small room, while people took a breath and vented. Much of it was infuriating, but I felt my teeth itch when a well-meaning Extinction Rebellion member piped up about “the toxic environment of demolition,” which at the time, didn’t seem like the most pressing issue. But weeks later, I returned to this idea of toxic air and how this city creates concrete graveyards, polluting our airwaves with lost stories and experiences, sailing on the air like smoke, looking for somewhere to land. How do you neutralise a toxic system that creeps into your body, that chokes your voice, that makes you feel weak?

There are lots of things to be livid about. Placing value on bricks falling away from us should remind us to place value on the bricks across this country that are still standing. Demolition is aggressive by its very nature and decimates value in forms beyond collision with concrete. It smashes our security, evicts us, takes away our resources and fractures communities. It attacks our sense of safety through state negligence or the flippant greed of free-market capitalism. It reminds us that part of the fight is repetition, showing over and over again that there is value in a place that others can’t see.

This knowledge prompted a few friends and I to visit the site on the last day the centre was open, 55 years from its inception. We joined campaigners and traders who walked into the middle of the road for a brief moment of power, holding up traffic for a few minutes to complete the walk. For those who accept the idea that bricks hold stories, you might appreciate the poetry of a kind of spiritual ritual, walking in a circle of protection to preserve the memories of a place.

We were reminded that our responsibility is to continue to organise even as concrete falls. To archive histories, to know when to direct our actions from saving spaces to relocating people, to provide legal help, care, to show support, make noise, and build strong communities elsewhere.

Mortar tumbling through the air still makes its way into my dreams even now. Though these days, before I can clench my jaw, I wake up, thinking about what we can build from the rubble. 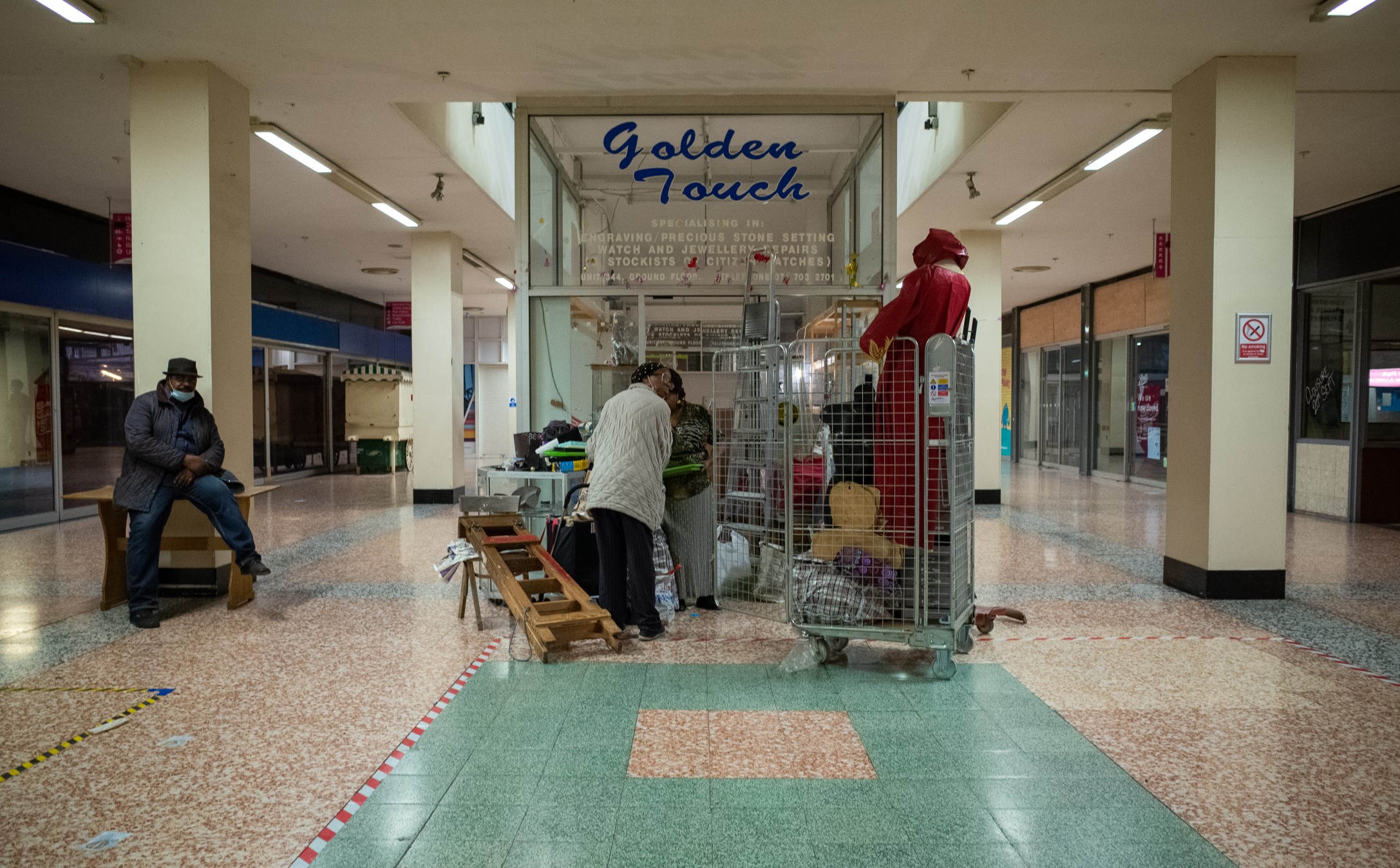 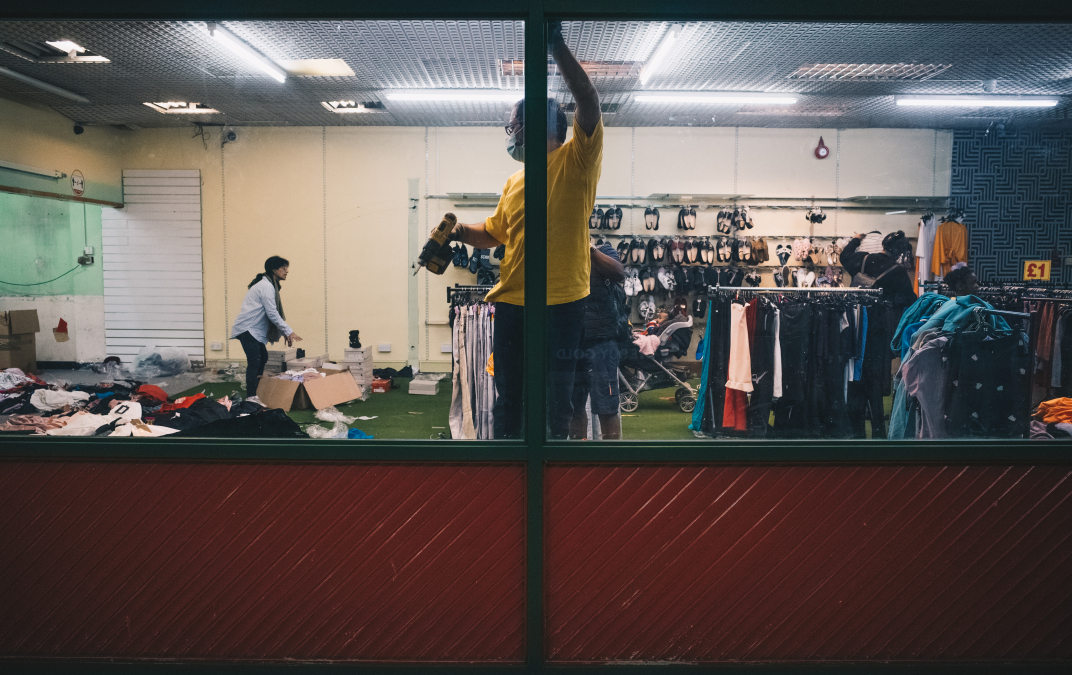 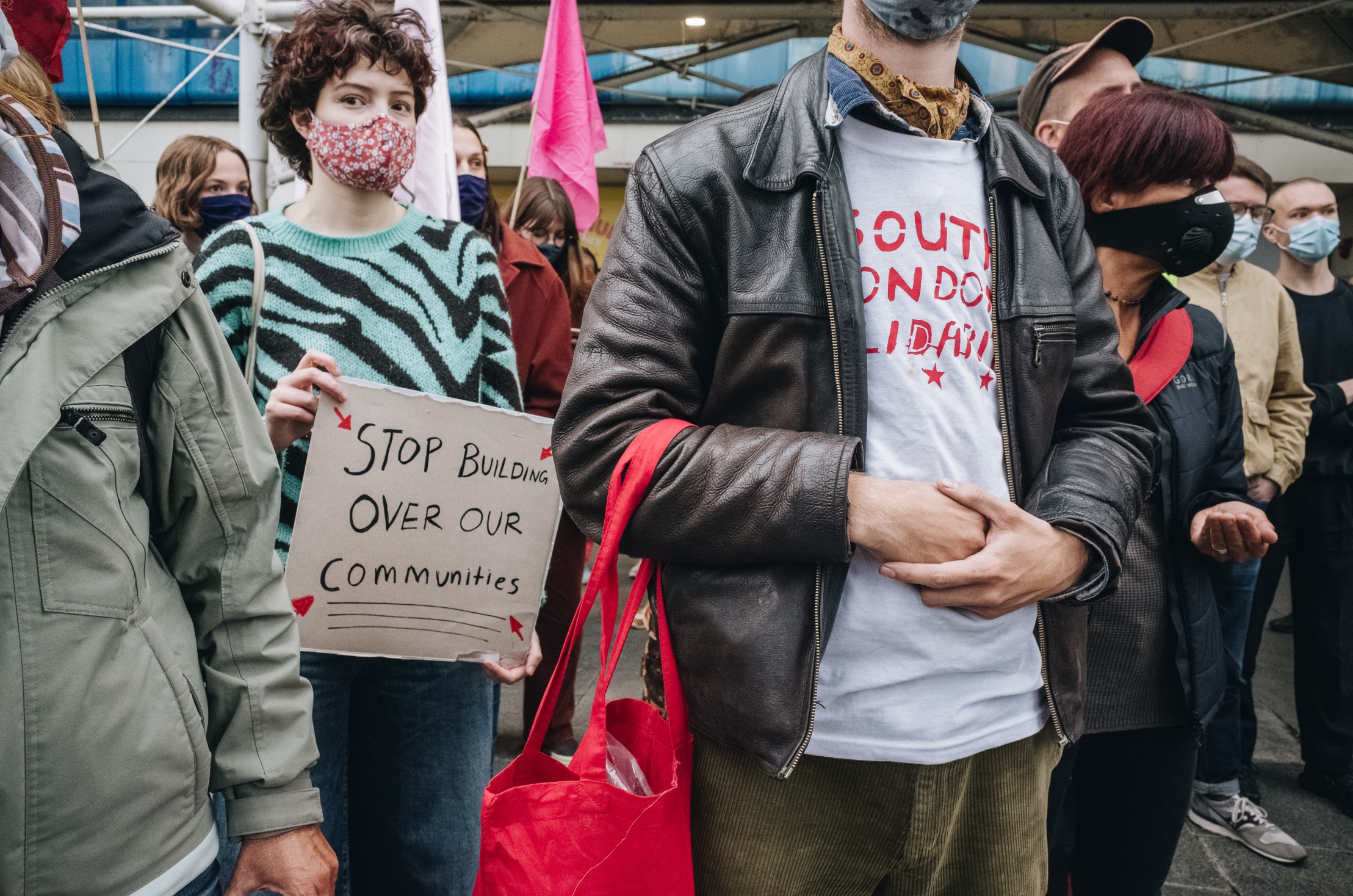 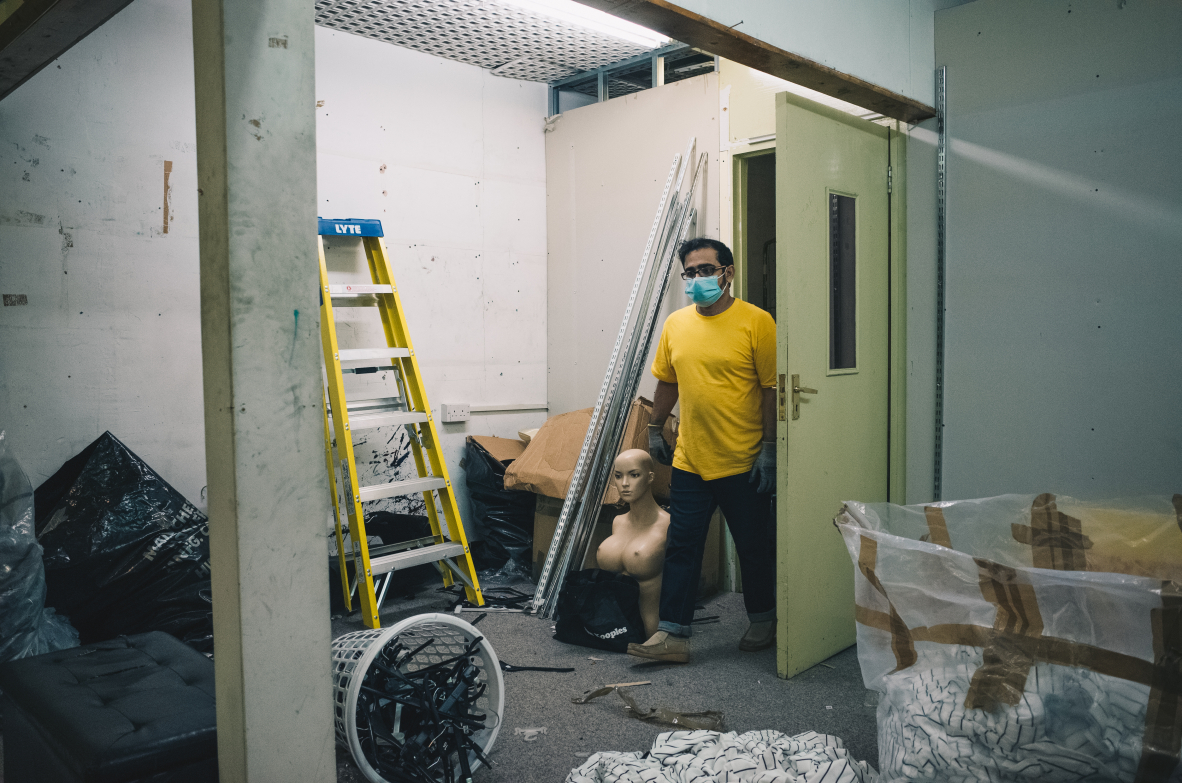 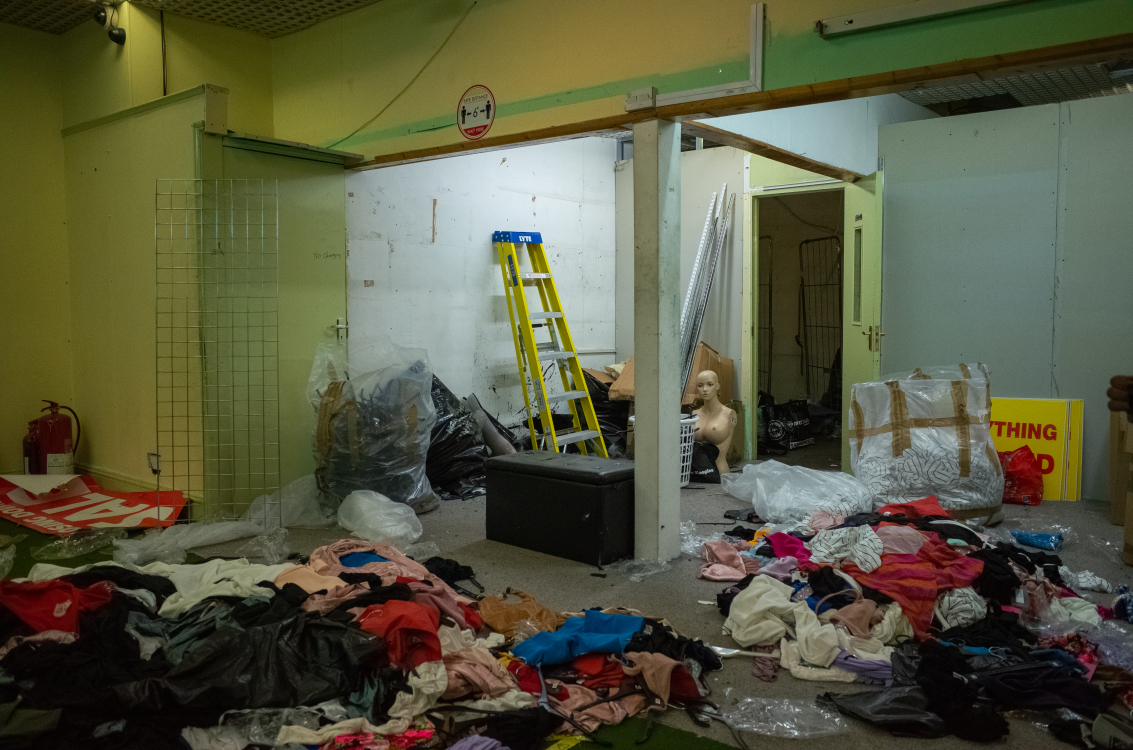 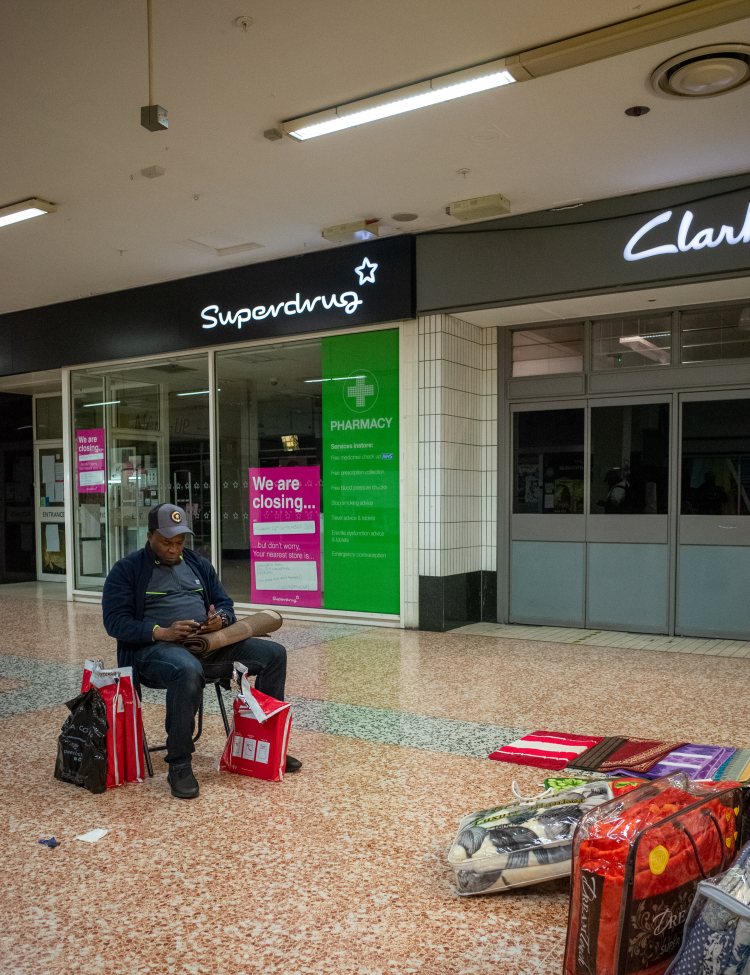 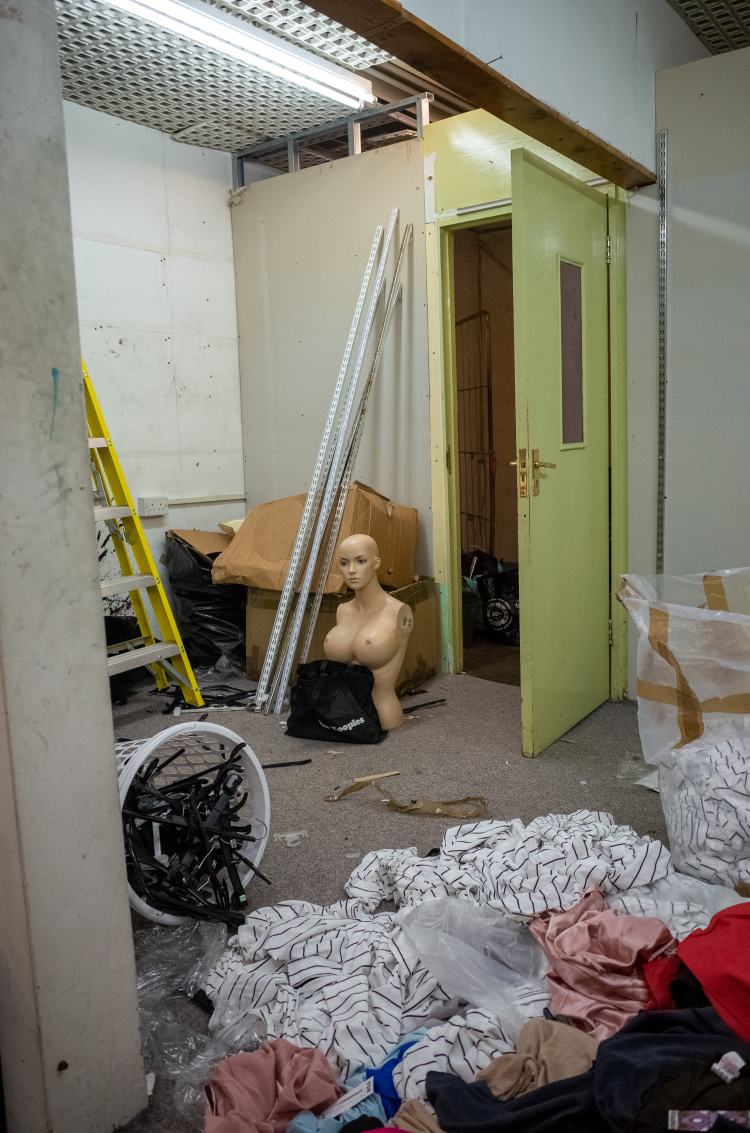 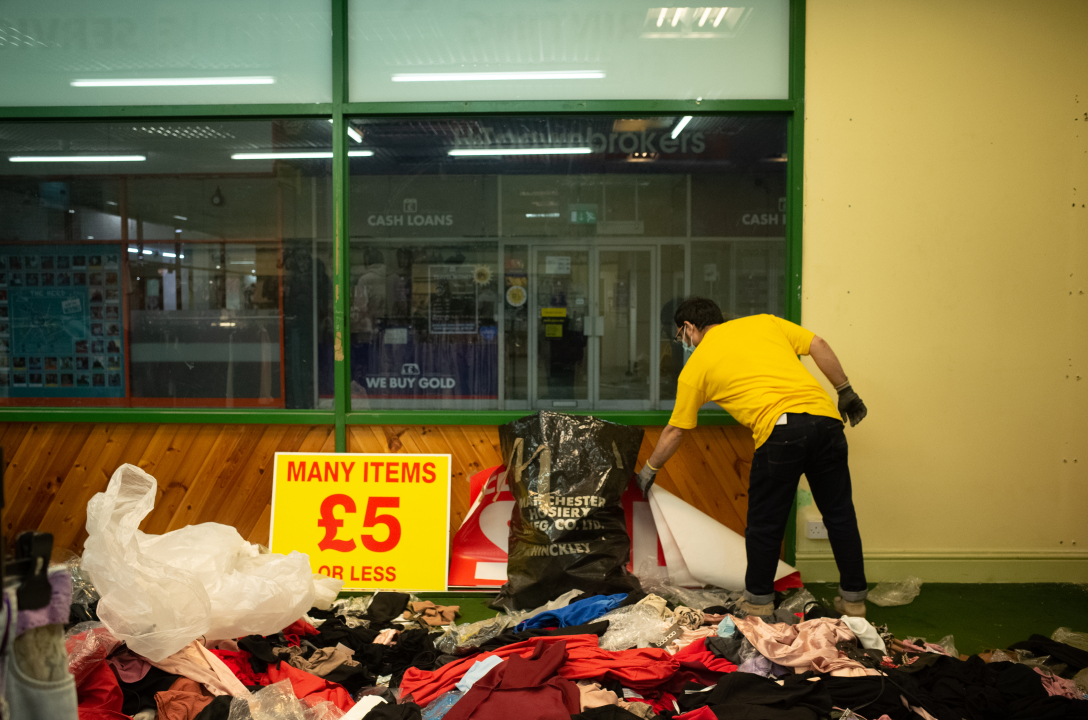 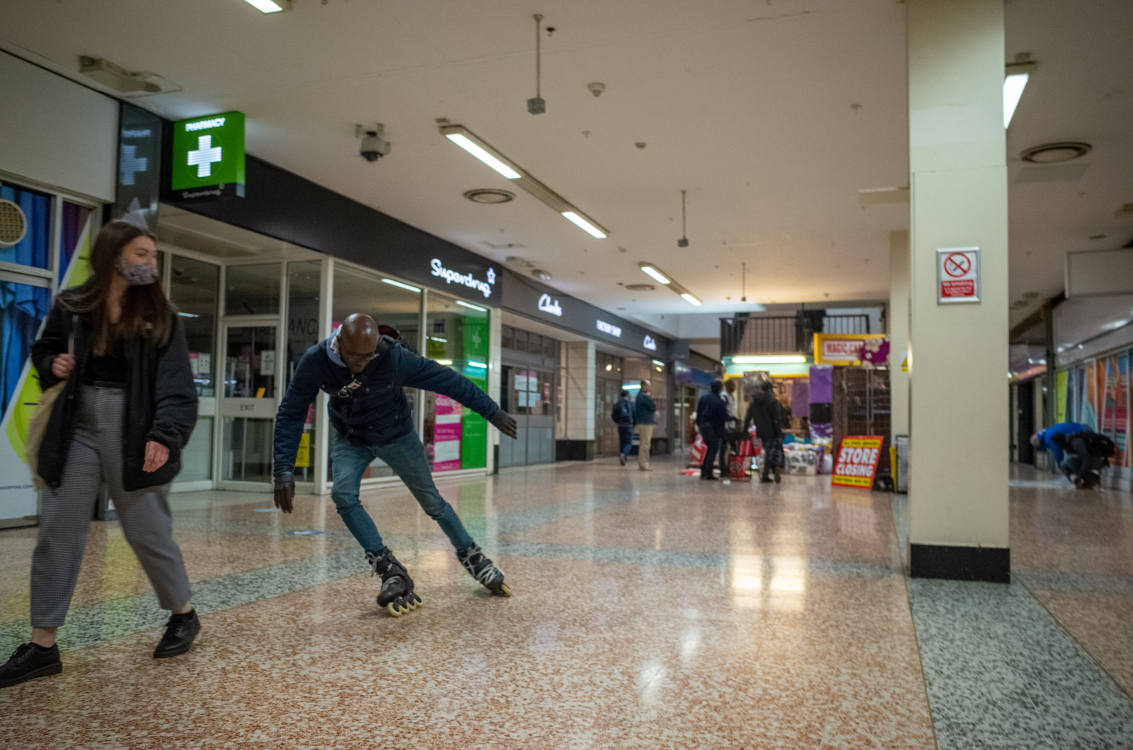 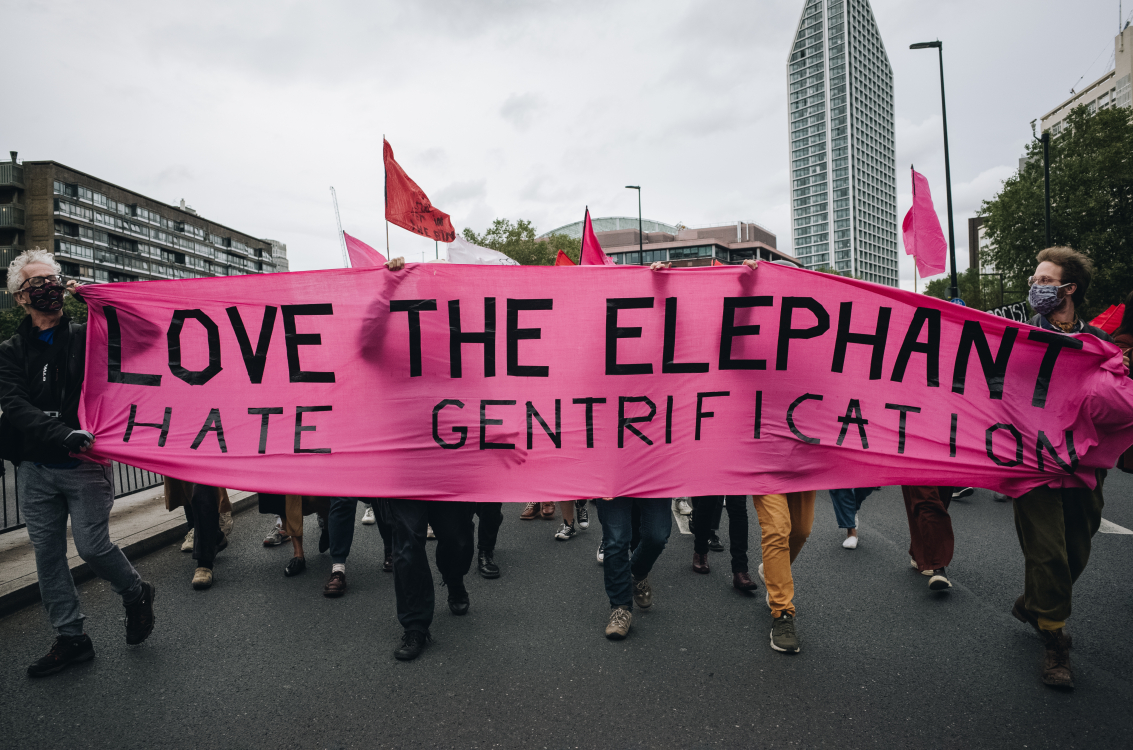 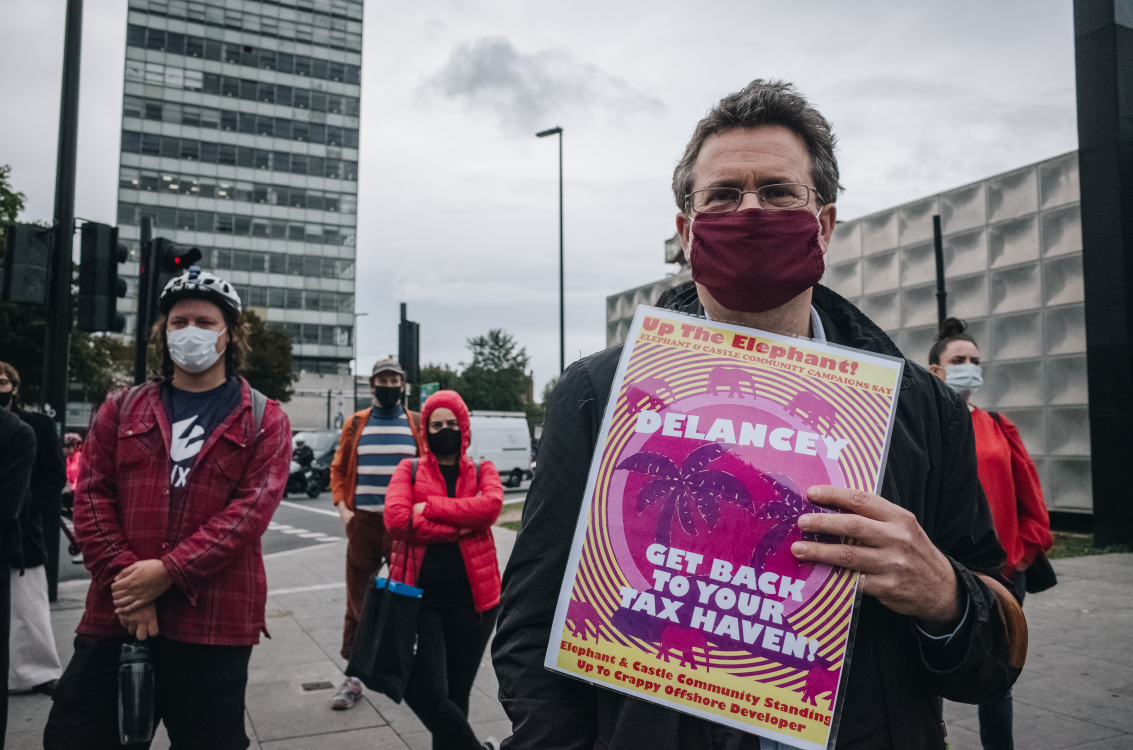 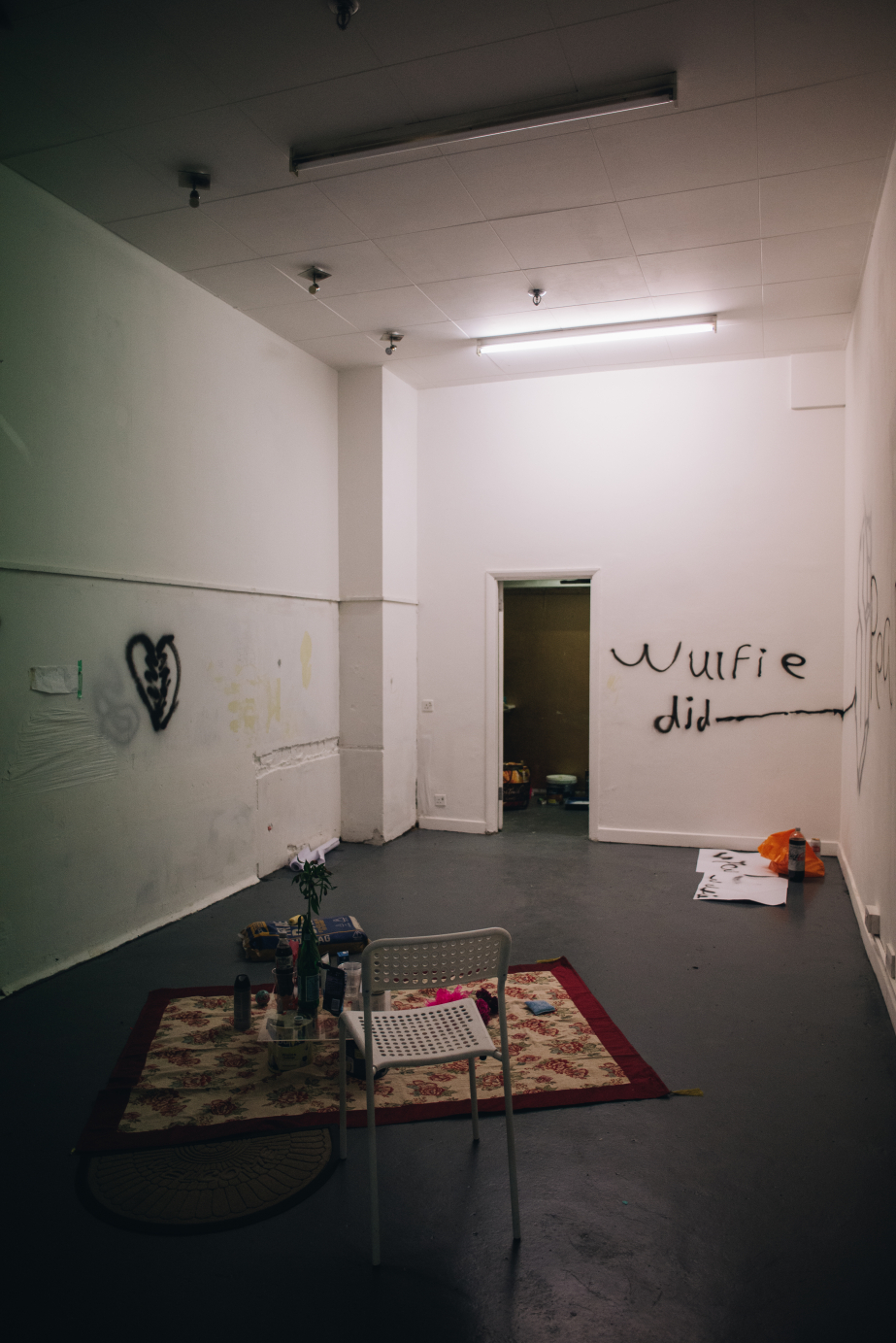 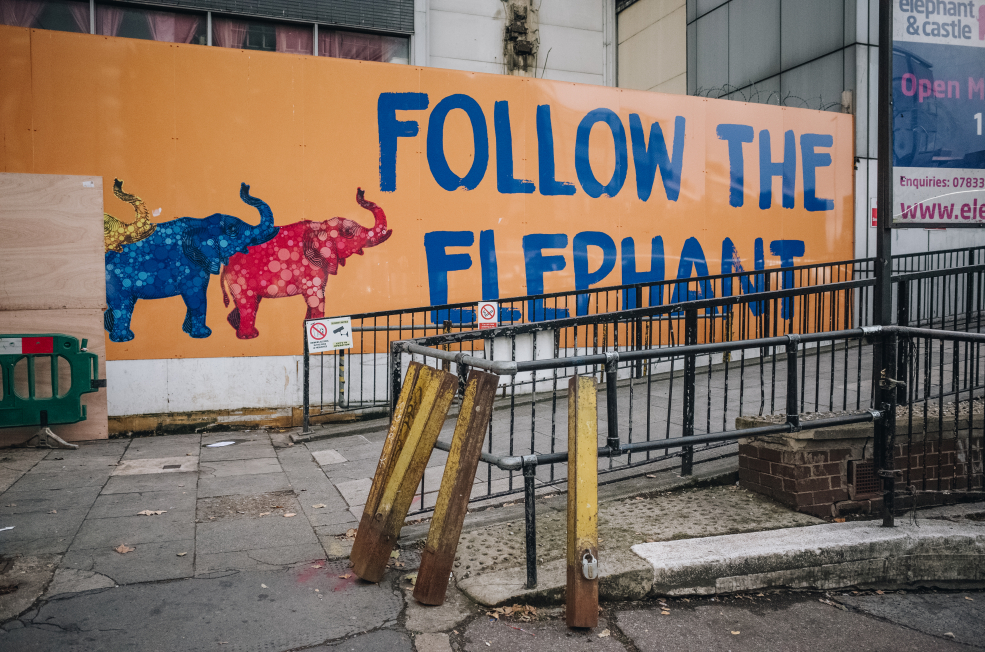 Find out how to support Up the Elephant by visiting their website.

Linkedin
RELATED ARTICLES
OTHER ARTICLES
Wealth inequality and the rising cost of socialising is placing a strain on people’s relationships, reports Eve Upton-Clark.
A new report has found that the majority of Britains approach trans issues with compassion. It’s about time this was reflected by our media landscape.
Photographer Matthew Brookes recalls following a group of young people in Venice Beach living in search of the perfect wave.
Photographer Arthur Grace recalls travelling through the Soviet Bloc and finding ways to evade the surveillance of his work.
The past five years have seen a staggering increase in foodbank usage across the UK. Now, staff fear things are set to get much worse.
In her new book, the author explores the country’s housing crisis in human terms and calls for radical action to address a broken system.