News & Politics / Opinion / Returning to football after my gender transition 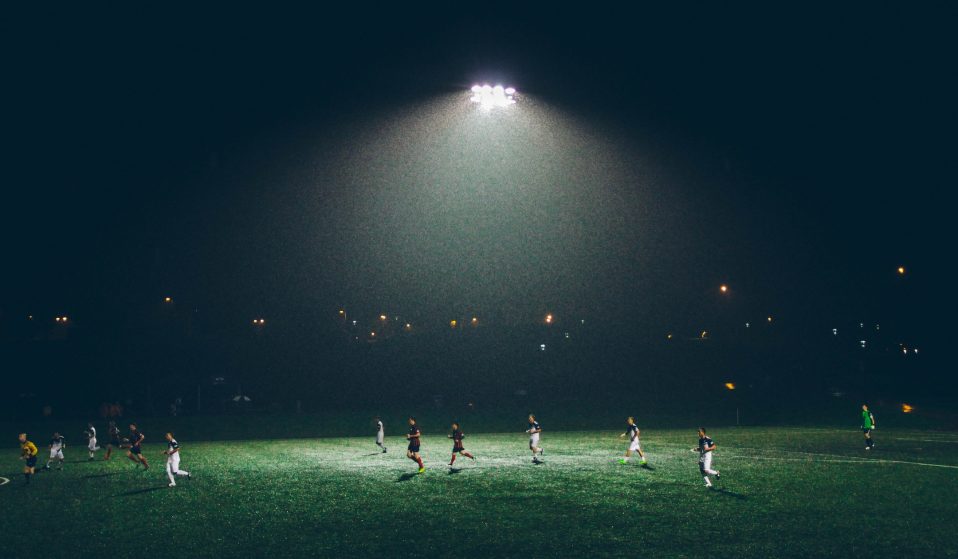 Writer Arthur Webber recounts his return to football after transitioning and encouraging others to do the same.

For many trans people, participating in sport can be fraught. Writer Arthur Webber recounts his return to football after transitioning and encouraging others to do the same.

Clad in a blue and white striped jersey, white shorts and knee high socks, it was in the final game of the tournament that I had my moment. After a switch of play from the other side of the field had the ball hurtling towards where I stood, I landed a stunning right-footed strike. As a defender, this was the first time I’d had the opportunity to score. Little did I know, this game would be my last for over a decade.

Shortly after the school tournament, aged 13, I realised I was a transgender man. I immediately accepted I would never play for a women’s team again. The decision made logical sense – I was not a woman, so should not be on a women’s team – but it was devastating. Football was my life. An avid supporter of Arsenal since age six, I played football throughout my childhood. I always opted for mixed-sex or boys squads, with me being the only ‘exception’ to the latter. At secondary school, when no exceptions were permitted, I reluctantly accepted the label ‘woman’ so I could play. However, I could not live a lie.

As an adult, I would stare longingly at AstroTurf pitches I cycled past on my way home from work. I was out and making progress with my medical transition. In theory, it was possible to return to the game, but in practice? Peterborough, my hometown, did not seem particularly welcoming to the LGBTQ+ community. A young man was attacked just a few streets from my home for being bisexual.  Would the group of burly men playing five-a-side on a Wednesday evening respond well to a transgender person asking to join in? Probably not, I decided.

My fears around returning to the game were not unfounded. Transphobia within sport had only increased during my absence. A 2019 report by OutSport found that 58 per cent of transgender people reported feeling unwelcome in sport, and 46 per cent had a negative experience in sport within the previous 12 months.

Due to prevailing transmisogyny, most vitriol is aimed towards trans women, such as the current backlash directed at swimmer Lia Thomas or the bile weightlifter Laurel Hubbard received for qualifying for the Olympics. Despite strict guidelines for hormone levels, there are still constant allegations that trans women’s very presence in women’s sport, whether grassroots or professional, is unfair.

According to the OutSport survey, 94 per cent of respondents believed that sport has a problem with transphobia. This alone is enough to dissuade many people of all genders from returning to their sport of choice after transition. Specifically in relation to football, 41 per cent of the LGBTQ+ community felt unwelcome because of their sexual orientation or gender identity. This compares to 14 per cent for swimming and 10 per cent for boxing.

There are undeniably problems with sport as a whole for queer people, but football appears to be a uniquely toxic environment. But even so, as time passed, I considered the possibility that I could play again. I was now in a relationship with a man living in London, and knew of several inclusive teams there. A friend from university (a gay cis man) played for one.

On a personal level, I did not know a single trans man who played football, even casually. While there are high-profile examples – most notably Kumi Yokoyama (a striker for the Japanese national women’s team) who came out publicly in 2021 – these are few and far between. Indeed, there were none in my network of transgender male friends, so I felt alone.

On top of the concerns about my sporting ability, there was the anxiety around my gender presentation. What if I wasn’t masculine enough to fit in with my teammates? These worries buzzed through my brain as I set foot on a football pitch for the first time in eleven years. 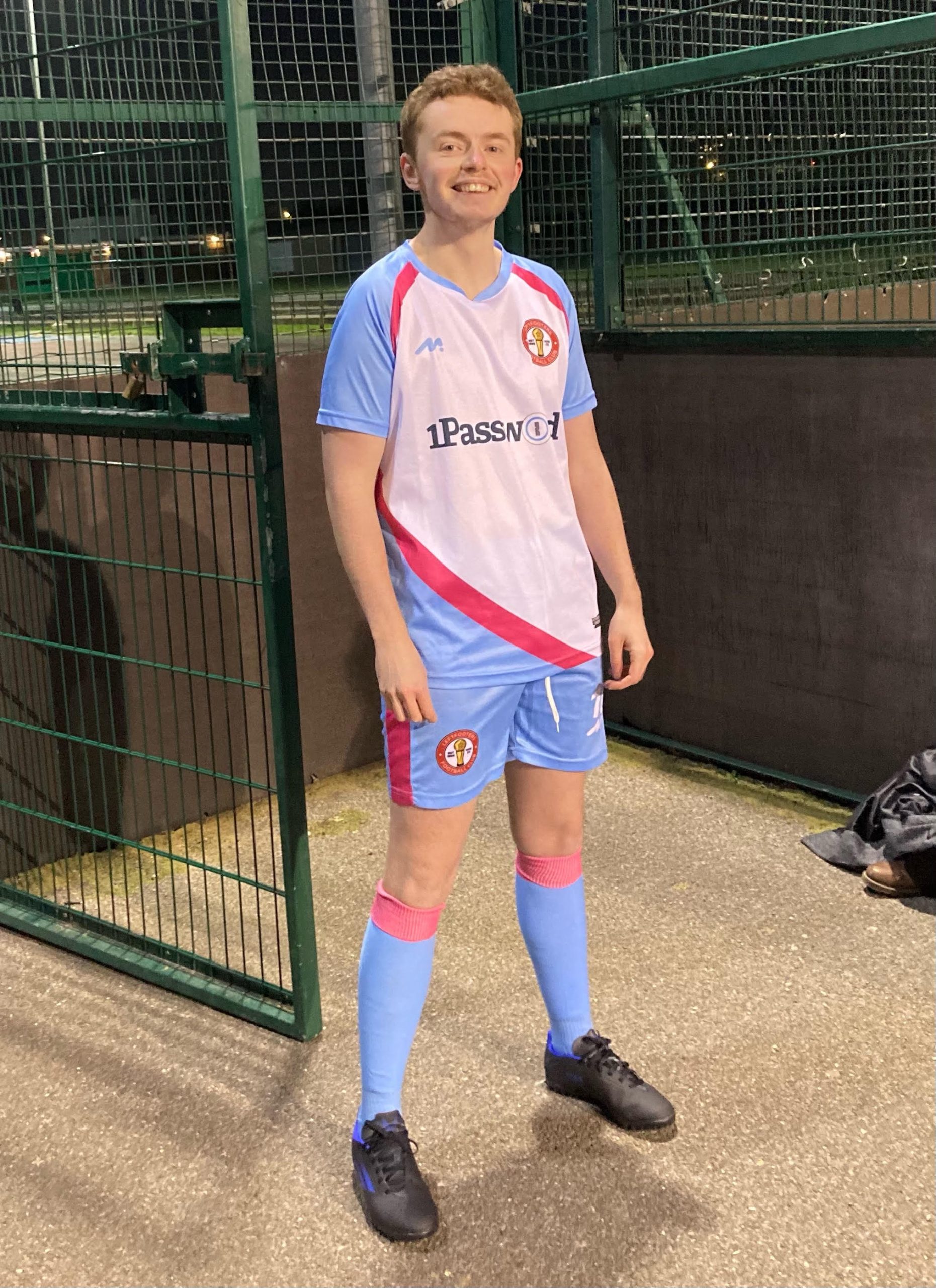 Photo of the author

My first game as a transgender man went OK. A few silly misses, but overall, a good game. I discovered that I now loved controlling the ball with my chest. My lack of breasts meant that it no longer ricocheted in unpredictable directions and hurt considerably less.

February marks my second month at Leftfooters FC. Each match, I improve. My confidence grows with every successful pass. Recently, I ended my eleven year goal scoring drought and management of the team have agreed that I’m ready for a league game. By documenting my return to football on social media, I’m hoping to encourage others who were considering taking the same steps. Already, one of my trans friends has texted me to ask if he could play too, and to confide in me that he had the same story as me, the same fears.

I have no idea whether football is coming home in the World Cup this year. But, after eleven years away, I finally have.

Linkedin
RELATED ARTICLES
OTHER ARTICLES
Photographer Robin Graubard’s debut book offers an unflinching record of turbulence and change across the Balkans.
Our new magazine is here, starring the inimitable Mitski. Order your copy now and join us on a trip around the world.
After news broke last week around an expected reversal of the 1973 landmark law that made abortion legal in the US, protestors gathered in the UK in support of American women.
Following the release of his newly republished 1991 book, Redheads, the American photographer reflects on his celebration of ginger people and their magnetic power.
Photographer Phyllis Christopher recalls capturing sex and protest at a time when the city had become a haven for the queer community.
To mark the anniversary of the mass trespass of Kinder Scout, a group of hikers came together with the intent of creating a new, fully inclusive culture for rural spaces.