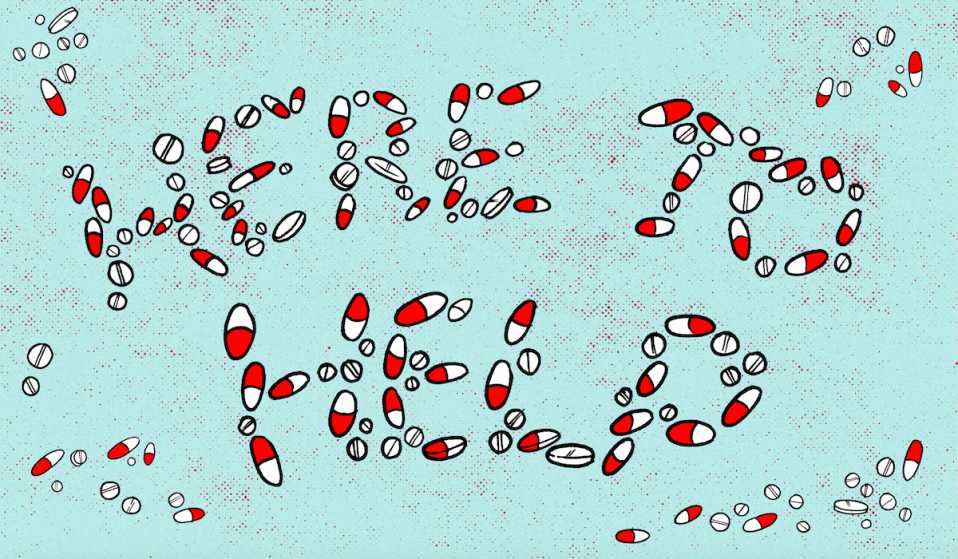 Be it as a prescription for treating ADHD, or its growing popularity as a ‘study drug’, Ritalin is on the rise. We asked an expert to bust the myths.

Be it as a prescription for treating ADHD, or its growing popularity as a ‘study drug’, Ritalin is on the rise. We asked writer and community pharmacist Jonny Winship to bust the myths.

If you were like me, growing up in an uninspiring corner of England within a school rare to reward creative thought, you’re probably no stranger to the educational system’s failings. For many of us, the first 21 years of our lives are spent grappling with the expectations of a society that reductively ranks its young people on a results basis: grades, numbers, distinctions and the lazy use of the descending alphabet.

Kids that find it difficult to conform to such an educational structure often find themselves known as ‘troublemakers’, which sometimes leads to them being labelled with the diagnosis ADHD (attention deficit hyperactivity disorder), a condition characterised by a short attention span, impulsive behaviour and having little or no sense of danger. It is treated with Methylphenidate – which you may know as Xenidate, Concerta, or the more commonly known brand Ritalin. A recent study suggested evidence to support efficacy and advocated an increase in prescribing of these drugs.

But other than its use in treating ADHD, Ritalin has also been regularly cited in pop-culture: take early Odd Future tracks, films like Charlie Bartlett and Gummo, or the episode of Its Always Sunny in Philadelphia when Frank and Dennis snort lines of the fictitious drug ‘Ridderal’. Similarly, the usage of Ritalin among US students as a ‘study drug’ is widespread and highly documented.

This greater awareness has seen a peak in its usage among young people in the UK. Combined with an increase in prescriptions, the growing financial pressures of university, a competitive employment market and the ready availability of some drugs via the internet, it’s no wonder. But what do we really know about this magic smart pill? What are the benefits, the risks, – and don’t we all deserve the right to be clever?

“Will taking a Ritalin a day, allow me to unlock my true, true potential and be super successful and mad attractive like Bradley Cooper in Limitless?”

Like other Nootropics or smart drugs (these include Adderral or Modafinil), taking Ritalin won’t suddenly inspire you to burst into a lab and solve science’s greatest mysteries. It won’t even help you crack that dusty Rubik’s cube. However, it may give you the will to have a good go – for at least an hour or so.

Ritalin works by increasing noradrenaline and dopaminergic activity in the prefrontal cortex. This is the part of the brain thought to be responsible for cognition: logic, problem solving and concentration, along with influencing impulse control and shaping our personality. It is thought to do this by inhibiting the re-uptake of dopamine at receptors in this part of the brain.

So, to the uninterested kid in the classroom, it may encourage them to think twice about emptying the entire contents of their pencil onto their desk while the teacher is talking about plant cells. Similarly, for the bleary-eyed student in the library at 11pm, it might help them ignore the allure of their Twitter feed and the warmth of their bed, allowing them to tunnel-vison their thoughts towards study.

These types of drugs are thought to be more effective for students who have difficulty in concentrating for long periods of time. The average concentration span of a British person is only 14 minutes, and variations of shorter and longer concentration spans will exist across the board.

However, there is very little concrete proof to suggest Ritalin results in significant improvement when it comes to exam performance or grades. Users report an increased concentration lasting for hours longer than usual – as well as an increased willingness and motivation to tackle uninspiring subjects – but there is also evidence to suggest a decrease in creativity and fluent thought. So, although it may allow you to stare at a textbook for eight hours, your dissertation might end up sounding like the distressed ramblings of Alex Jones.

“After heavy use, will I find myself in a cold sweat, scratching at the walls and hallucinating?”

Ritalin has a similar mode of action to cocaine, although the latter only takes around five minutes to reach peak concentration, while Ritalin takes an hour or two. On top of that, Cocaine also tends to overstimulate the brain, which will make it difficult to concentrate on one particular thing.

Although Ritalin is highly effective at blocking dopamine transporters and increasing the levels of dopamine in the brain’s receptors, when taken orally in normal doses for ADHD, it doesn’t create a high. It’s only when Ritalin is crushed up and snorted – or taken in higher, unrecommended doses – that users may experience a mild euphoria. These drugs are not manufactured for any other intended route than for being taken orally – snorting any drug can seriously damage your nose and mucous membranes.

So, there is the potential for abuse with this drug. And, the more you use it, the higher the likelihood of requiring a higher doses to attain the same level of concentration as before. If you find yourself needing to drop a Ritalin before every lecture, or during your weekly catch-up with your parents, you may be walking into a drug-dependence issue, which can result in a list of destructive social, financial and health problems.

People often compare drugs like Ritalin to other legal stimulants such as Nicotine and caffeine, which do both effect brain activity and influence dopamine levels (in fact, caffeine and nicotine are, by definition, performance enhancing drugs, as they can be found to have a positive effect on concentration). However, Ritalin has a much more significant effect on dopamine levels and brain activity.

Much like Caffeine and Nicotine, Methylphenidate has its side effects – even though it’s a prescription drug, it can be very dangerous. Short-term side effects include headache, decreased appetite, abnormal behaviour, insomnia, anxiety, increased blood pressure and heart rate and palpitations. It may also aggravate predisposing conditions, heart problems or mental health issues.

General anxiety and stress are common problems among students and young people, and taking Ritalin is likely to be detrimental to your mental health as you run the risk of amplifying or worsening your condition. If you are feeling undue pressure due to work, social or financial strains, it is best to seek help from your university, workplace, healthcare professionals or charities such as Mind. If you take any regularly prescribed medication, Methylphenidate may also interfere with other drugs’ effectiveness and safety – such as interfering with the breakdown of antidepressants in the body, for example.

There is also very little evidence surrounding the drug’s long-term effects on the brain and the body – even when prescribed under controlled conditions for ADHD.

“I don’t fancy blagging a serious health issue to my GP because it will permanently stay on my record. Can’t I just buy a load off the internet?”

Methylphenidate can only be legally acquired in the UK with a valid prescription for ADHD. It’s also a scheduled drug, which means its subject to stricter supply and custody regulations. In the UK it is classified as a Class B, and can result in up to 5 years in prison for possession and 14 years for dealing. Incidents that lead to incarceration amongst students are rare, although there is the risk of facing retribution from a university or school.

When you buy any drug over the internet, you run a high risk of these drugs being fake. Drugs purchased online will often contain contaminants – much like what are found in coke and pills on the street – containing toxic and dangerous ingredients. Not only that, you risk blowing your finite funds on something that is not going to work, leaving you with the lingering anxiety of wondering what the hell you did just ingest.

The incidence of these drugs is reportedly increasing within campuses in the UK, and there would be little surprise if a rising occurrence of illicit use within sixth forms and schools were to follow. If you do find yourself choosing to use smart drugs for your studies, recent advice from Addaction suggests first researching the side effects and weighing up the risks. Avoid using drugs alongside other meds and avoid mixing them with alcohol or other illicit drugs. Advice and help can also be found through their confidential web chat.

Jonny Winship is a writer and community pharmacist and volunteer for The Loop.

Linkedin
RELATED ARTICLES
OTHER ARTICLES
A sharp increase in officers armed with the electrical weapon is resulting in serious injuries and deaths.
To mark the premiere of his new documentary on surfing giant Gerry Lopez, the filmmaker and former pro skateboarder sits down to share his unique brand of wisdom.
Following the release of his latest album, the rapper talks about finding a new approach to songwriting, attitudes to poverty, and why his music is more than a political statement.
Students are being left to languish in unsafe housing, in some cases leading to serious health complications.
As the Criminal Bar Association enters its fifth week of action, criminal barrister Russel Fraser explains why the legal professionals have walked out and how action is likely to escalate.
From the chip shops, to the bingo parlors and burlesque dancers, photographer Mike Coles remembers capturing scenes of holidaymakers by the English coast.