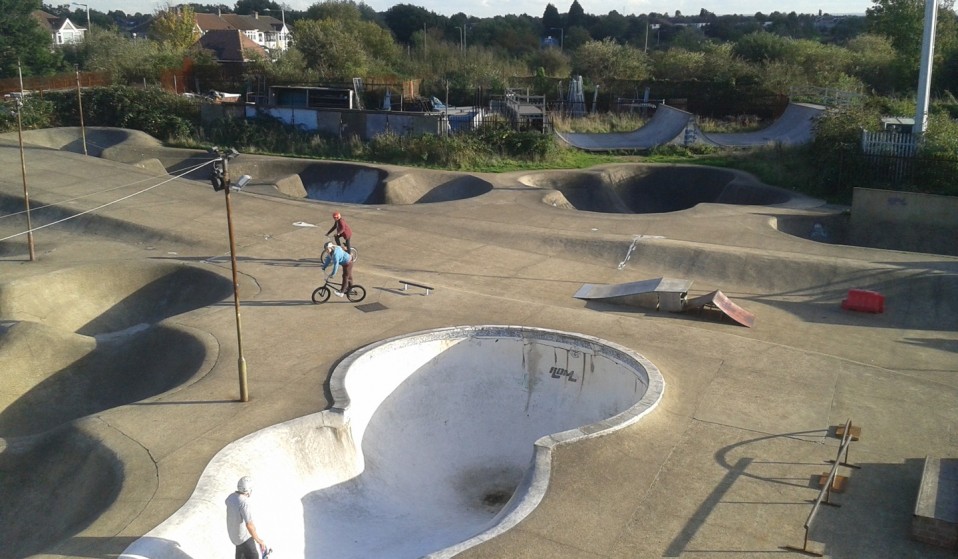 News that The Rom skatepark in Hornchurch is being listed by English Heritage should come as no surprise. But you can feel the wrath of Daily Mail-reading middle-England seething over its free Waitrose cup of milky coffee.

Achieving Grade II listing status might seem trivial – but the Rom getting the nod from English Heritage is kind of a big deal. English Heritage are guardians of the notoriously aspic-pickled British architectural aesthetic – and when a building or any structure becomes listed it becomes notoriously difficult if not impossible to knock the thing down, move it or in any way alter its look or texture.

The irony is embedded deeply, whichever way you look at the issue. Skateparks are by their very nature transient, moveable feasts whose place in pop culture has only ever been a fleeting thing. The moment any institution within skateboarding itself becomes calcified – it loses its power and resonance.

Tony Alva is an exception to the rule that old guys (or old things) don’t rule in skating. The drawn out controversy about protection of London’s South Bank spot illustrates how the twin trajectories of establishment aims and those of skating’s alternative ethos can at times intertwine and contradict.

The ROM is one of places where the first wave of skate culture landed in the mid seventies and dates from exactly the moment that Southbank was burning its way into the consciousness of British kids. Back then it was all knee-hi socks, plastic decks, tic-tacs and slalom sessions – elbow pads from Woolworths and a kind of quasi-Californian aesthetic borrowed from the fag end of the Z-Boys’ existence and begged, borrowed or stolen copies of Skateboarder Magazine.

Out on the edges of Metropolitan Essex and drawing kids from all over London and outlying areas beyond, The Rom was an intimidating place (as every good skate park should be for an 11 year old), where the cooler, harder, older kids were beginning to carve out an identity. Any given weekend might involve a long Red Bus Rover ride – to the Southbank on a Saturday and then to the The Rom on a Sunday and home in time for the roast. It was a place where the vaguely punkish, bus shelter-wrought way of looking at the world was forged out of the mass of clashing influences that kids of the 1970s era were exposed too.

It was scary. It was cool. You got in your first fights there, scraped your virgin knees there. It wasn’t the sort of place your mum wanted you to go.

You can’t help but be stoked that The Rom is to be listed – but there’s a buried feeling, however – that EH are listing something that was never meant to be embraced by the British establishment. Whether that is a good or a bad thing depends on your point of view.

Linkedin
RELATED ARTICLES
OTHER ARTICLES
Students are being left to languish in unsafe housing, in some cases leading to serious health complications.
With the Women’s Euros in full swing, last week saw glorious, sweaty celebrations take place in a dedicated, safe space for female and non-binary fans.
Ahead of the release of his new album, the producer reflects on his battle with drug use, getting into painting and what Madonna taught him.
The Conservative leadership contest has exposed an obvious truth: whether our next prime minister is a woman, or a British-Asian man, they will continue to fan the flames of division.
A sharp increase in officers armed with the electrical weapon is resulting in serious injuries and deaths.
The author discusses her new memoir, which offers a sobering reflection on the racism and otherness she’s experienced along with a joyful celebration of her culinary heritage.