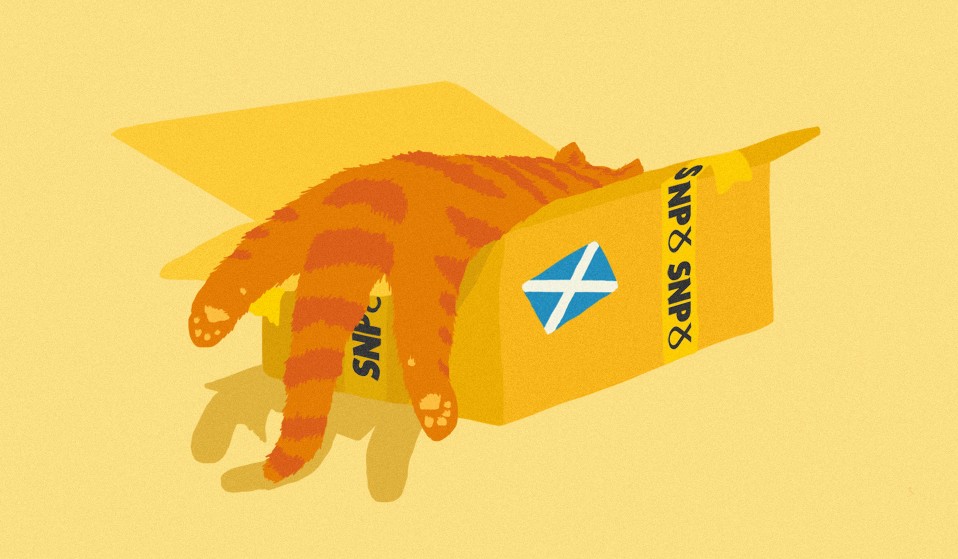 Brexit might well mean Brexit, but will it also mean independence for Scotland?

When Scotland rejected independence in 2014, it was a national fear of instability that allowed unionism to prevail. Then Brexit happened, and another referendum on Scotland's future is on the cards. But is radically progressive Scottish nationalism a paradox? A Schrödinger's cat that means all things to all people?

Of the many consequences of the vote for Brexit last year, the most obviously foreseeable has just heaved into view. Nicola Sturgeon, citing Theresa May’s apparent determination to plunge headlong into the hardest Brexit possible, has announced she will ask the Scottish parliament for a mandate to negotiate a new referendum on Scottish independence, to be held as the UK’s likely negotiating period draws to a close in late 2018.

Sturgeon had always stated that should the UK’s international relations change substantially, she would seek another referendum: effectively a Brexit escape clause, its activation was only a matter of time. It was a manifesto pledge that was voted on, and she has a mandate to boot.

There are matters of formal politics that stand in the way: the SNP’s voting partners in the Scottish parliament, the Greens, will have to be satisfied that there’s a clear demand from the Scottish people for Referendum round two. More difficult, perhaps, will be gaining consent from Westminster: the authority to hold a referendum lies ultimately with Theresa May, who – without any apparent irony – condemned the idea as divisive. Yet any veto from her would merely strengthen the argument that the Westminster yoke has become unbearable. Should May prove intransigent, the Scottish government could press ahead with an ‘advisory’ referendum anyway. A new vote now seems inevitable.

Away from the chessboard of high politics, who could blame the Scots for wanting to break away? The arguments put forward by ‘Better Together’ during the last referendum often hinged on British access to Europe, and its comparative advantage within the European Union. May’s determination to avoid any accommodation with Europe renders those arguments dead on arrival.

Beyond simple economic calculation, who could look on England’s bubbling stew of imperial nostalgia, anti-migrant paranoia and omnidirectional resentment and not retch? Who would not wish to wash their hands of the U.S.’ snivelling global lieutenant, its unfailing ally in every atrocity, and its sedately corrupt institutions – or its monuments to mediocrity, deference and graft, the Windsor family?

What a fitting testament it would be to a nation long drunk on self-importance and the legacy of global plunder that the party most committed to its tawdry self-regard should finally steer it to its ruin.

Neither the delusions of the English nor the catastrophic stupidity of the government’s Brexit strategy amount to strong positive arguments for a Scottish state in themselves. Attitude polling suggests risk aversion was a key factor in Scots voting to stay in the UK last time: it may be that by late next year, remaining tethered to a country cracking up under the weight of Brexit looks riskier than going it alone (the IFS warned just days ago that Britain now faces a third austerity parliament after 2020).

There are still serious uncertainties about independence: the currency question – whether an independent Scotland would use a new currency, or one pegged to a collapsing pound, or the economic disaster-zone of the Euro – and whether its accession to the EU would be as smooth as the SNP claims.

Spain, which has a persistent secessionist thorn in its foot – Catalonia – has every reason to make independence look awkward. Yet the goodwill for Sturgeon among European leaders should not be underestimated, and the ability of European technocrats to bend the rules and find some accommodation for favoured nations is legendary. In the current climate, an Atlantic nation cheering the European project would be a welcome PR coup.

Any resurrection of the ‘Better Together’ campaign will not only wreck itself on Brexit, but is unlikely to find the cross-party support it did last time – any such campaign is likely to be led exclusively by the Conservatives. More importantly, the promises made by the campaign last time – the ‘vow’ made for greater devolved powers – failed to materialise. An anti-independence campaign faces a serious credibility deficit.

Yet not all is rosy for the pro-independence camp either. The SNP has often been called a ‘tartan chameleon’, with deeply contradictory factions in the party bound together by their common goal of independence; radical visions find it hard to break the party’s monopoly on independence (a coalition of radicals – RISE – failed to make any headway in the last Scottish elections, despite some serious offerings).

The way various wings of the SNP talk about an independent Scotland makes it sound like Schrödinger’s cat in state form: both welfare-heavy and with a tax-slashing hand extended to business, an oil-rich state intent on leading the way in renewables, a migrant-friendly nation with a stringent points system – these incompatible visions might be possible in campaigning; in government they require resolution.

Which way would the SNP go? This is the Mhairi Black paradox: whether the firebrand’s vision of a socially just Scotland could be achieved in a party whose policy instincts are closer to the Blairite Third Way than most members admit. Yet the influx of members during and since the last referendum are broadly left-wing and working class (the SNP’s trade union group is now larger than the Scottish Labour Party): it may be enough to anchor a leftward shift in policy.

The party’s success has depended on uniting those for whom independence is a question of national justice (who believe Scotland suffers a democratic deficit with policy dictated from London, or in a vaguer need for self-determination) with those for whom it is an instrumental value (that an independent Scotland may assert different, more socially just policy priorities than Westminster allows): if the latter camp can assert itself, independence may look very attractive.

It is hard for those on the traditional Left to shake a suspicion of the SNP’s ‘talk left, walk right’ political history, harder still to shake a well-founded hostility to nationalism. It is not that all nationalisms are the same – despite Sadiq Khan’s suggestion to the contrary – but that the idea of the nation is the oldest way of binding together unequal relationships. Your boss might exploit you, you might worry where the next meal’s coming from – but at least you’re both united in your Englishness, or Scottishness.

The mistake, however, is to treat this merely as false consciousness or distraction from ‘real’ (i.e. economic) identity. The nation is still the fundamental unit of political thinking and administration. In the absence of a cohesive internationalist Left and a weak, atomised union landscape, the temptation to think of the nation as a vehicle for progressive politics is immense; any left-wing offer which doesn’t talk in fundamental terms about social direction, in the way nationalism of any stripe allows, will find it difficult to compete.

Scottish Labour’s problems are deep-rooted – its decades-long treatment of Scotland as a personal fiefdom, its unwillingness to learn from the last referendum, its unwillingness to tackle the SNP of 2017 rather than 1977 – but it could position itself strongly in this referendum by articulating a forceful social-democratic vision for the whole of the UK. Yet it can only do so by addressing its internal chaos over Brexit: any Scottish voter will rightly feel sceptical of the promise of a renewed UK which hews so closely to May’s Brexit vision.

Does it throw off its long-accustomed Unionism to attempt to clog the wheels of the headlong charge to Hard Brexit, and gamble on opportunity in the chaos? Such a move seems unlikely. But these conflicts – over sovereignty and nation, over how and for whom social justice can be delivered – split the bases of parties like Labour across Europe. They require an answer.

Linkedin
RELATED ARTICLES
OTHER ARTICLES
A recent High Court ruling against the right to wild camp in Dartmoor National Park sparked the largest land protest in history – and campaigners say their fight is not over yet.
Activists and campaigners are fighting back against new laws that would seriously undermine the ability to take industrial action, calling it an attack on fundamental workers' rights.
Filmmaker Laura Poitras discusses her new documentary which traces the remarkable life of the artist-activist and the impact of her battle against the US opioid crisis.
After blocking the Scottish government’s gender recognition reform bill, Westminster is now devising further changes to the law to make it harder for trans people to self-identify.
AI companies that develop image-generators using copyrighted artwork from the internet are coming under fire from artists who say that it amounts to theft.
Following the release of his debut single, Deyaz talks battling addiction, dealing with his struggles through music, and building a budding music career from his living room.