News & Politics / Opinion / Should we really judge people for the racist things they said as kids? 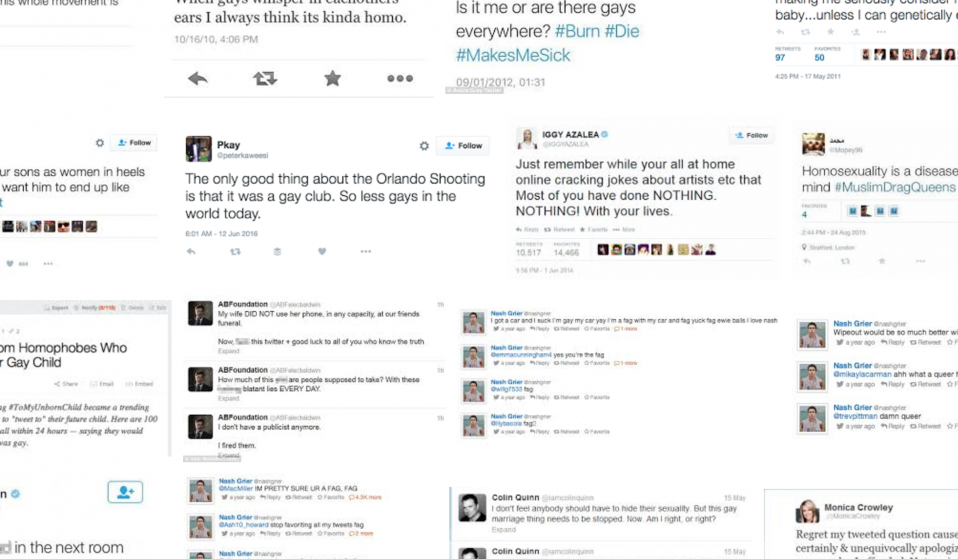 We all said stupid things as children. It's time the press stop trawling through young people's old social media posts to find fodder for headlines.

We all said stupid things as children. And thanks to social media, our generation has left a permanent mark for the first time. But is it right that words posted naively as teenagers on social media should be used to tarnish them years later?

I really don’t like racists. I hate anti-Semites and homophobes too. In fact, I’ve not got much time for anyone who thinks they’re superior to another person simply because of how or where they were born. Virtue signal completed.

But – and I never thought I’d be penning a ‘but’ on this topic – with the growth of social media, there are some nuances that have been neglected and must be explored when it comes to language.

The first generation to grow up with access to social media are now coming of age. Yet just a few years ago, they had little idea what that would come to mean.

The benefits and opportunities were clear: we could chat inanely on MSN with our pals all evening, sexual desires could be explored from the comfort of our own homes.

But we also left a permanent juvenile digital imprint, the results of which are only coming to light today.

Type “Paris Brown” into Google and you’ll find a prime example. There’ll be just one major news story presented for your delectation.

“Paris Brown: Kent youth PCC resigns after Twitter row,” reads the first result, a BBC News headline. “The UK’s first youth police and crime commissioner, Paris Brown, has resigned from her post following criticism of messages she posted on Twitter,” it follows up. Page after page of stories suggest, on first impression, that she’s a racist, a danger and a prat. 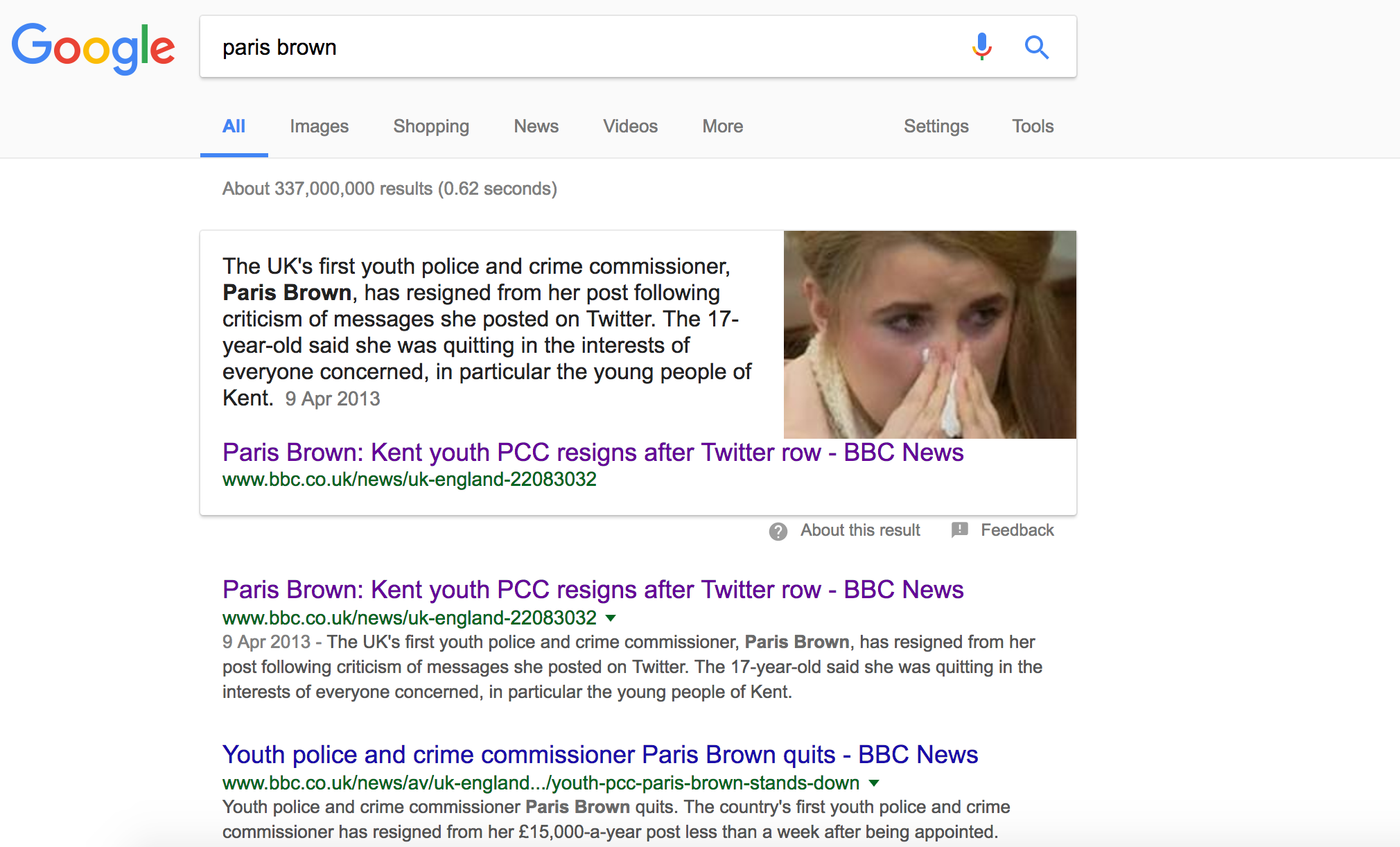 Despite the fact that she was appointed a youth police and crime commissioner – even the fully-fledged adult version of which is arguably a waste of time and cash – her reputation is now forever tarnished. But aside from a couple of slightly over-sharing tweets about weed (“I really wanna make a pact of hash brownies”), sex (“worst part about being single is coming home from party/night out horny as fuck and having to sleep alone”), and booze (“I’m getting so drunk this Saturday) that caused FURY and OUTRAGE in Britain’s bastion of morality the Daily Mail, there was some slightly more prejudiced language used too.

“She called homosexuals ‘fags’, immigrants ‘illegals’ and travellers ‘pikeys’,” the Mail reports, comments that understandably gave this newspaper – one famed for being so accepting – cause for concern. And yet these were comments she posted between the ages of 14 and 16 – a child – the results of which haunt her to this day.

Brown isn’t alone in having her reputation forever damaged for stupid mistakes made in the nativity of childhood. Just a few weeks ago, the Independent claimed to have an EXCLUSIVE: three student activists in the UK’s National Union of Students were racist, anti-semites too.

One was accused of making “deeply anti-Semitic” remarks after tweets emerged from 2012 and 2013 in which he said Israel has “no right to exist” and is “a land built on ethnic cleansing and colonialism”. Another student was accused of taking pleasure in “anti-Semitic tropes” after tweeting a link to a spoof video made by two Jewish women.

Aside from the fact that neither of those statements are anti-semitic, some of the quoted tweets did however make for unpleasant reading.

“Nah u won’t mate, it’ll cost you a pound #Jew,” one candidate had posted in May 2012, some five years prior to the piece’s publication. Another posted on Twitter in 2012 using the hashtags “heilhitler” and “fuckslutskilljews” – “apparently in an attempt at humour”, reports the Independent. Back then he was just fifteen.

It certainly says something about the casual racism that still persists in our society that these were the remarks of teenagers, but to infer that these are their currently held views is hardly fair.

When I was in my early to mid-teens, I made a whole load of stupid and reckless decisions. From the poor choices of clothing to downing well over a litre of lukewarm Strongbow with my mates in the park. I honestly also can’t remember every minor indiscretion but, if I’m honest, I’m sure I made derogatory, prejudiced remarks too in my youth. If I had Twitter at the time who knows what absolute trash I’d have shared with my followers.

As teenagers, we soak up the views of our peers, communities and surroundings; while still hurtful, it would be absurd to assume these are opinions that have stayed with them to this day.

If these were comments made by fully fledged adults, those with capacity and responsibility, I’m not so sure I’d be so quick and keen to forgive even if they’d now changed their tune. But here that’s simply not the case. Some of those used as examples are now young social justice campaigners and anti-racists. When this kicked off, Paris Brown was trying to do some good.

Of course, I’m not suggesting we give a Get Out of Jail Free card to anyone, aged fifteen or otherwise. If people make racist, homophobic, sexist, anti-semitic statements or otherwise, they have to be held for account.

But the casual use of derogatory remarks made naively as children should be judged in light of current actions, and the space in which these conversations happen can’t be the webpages of our national press. It’s wrong to permanently tarnish our reputations for what we did as children. It’ll discourage anyone from taking up positions of leadership or being in the public eye.

And as per usual, the whole issue also reeks of hypocrisy and double-standards. The allegations are sensationalised by some of the very same newspapers and politicians who gleefully whip up hatred on their pages, manifestos and speeches. The Daily Mail called out Paris Brown’s “violent, racist and anti-gay comments”, despite regularly publishing headlines that fan the flames of prejudice.

Instead shouldn’t we be pointing fingers at those who, as adults in positions of power, have continued to perpetuate prejudice through words and actions in this country. Who called gay people “gross and unnatural” in the Houses of Parliament? Incumbent Conservative MP Desmond Swayne. I look forward to the media expressing its valid outrage.

If we’re really educating young people to not cling onto unpleasant views then we should be welcoming when their outlook changes – embrace them for it, rather than drag their names through the mud.

As a kid I might have well have thought Santa came down the chimney at Christmas. It shouldn’t discount me now from being accepted as a rational, logical man. The same logic must be applicable for those who’ve spouted bigotry as children.

Linkedin
RELATED ARTICLES
OTHER ARTICLES
After a devastating fire, creatives in the city are coming together to call for more affordable workspaces.
Photographer Ira Lapu documents the lives of ordinary Ukrainians living amid a brutal conflict.
The Egyptian government are continuing the repressive mistreatment of environmental campaigners.
A centuries-old tradition is offering families a way to honour the deceased, reports Arbab Ali.
A new photo series documents tribes preserving the environment through simple, sustainable practices in central Asia.
The photographer reflects on a decade which saw the rise of MTV and the flourishing of new genres.