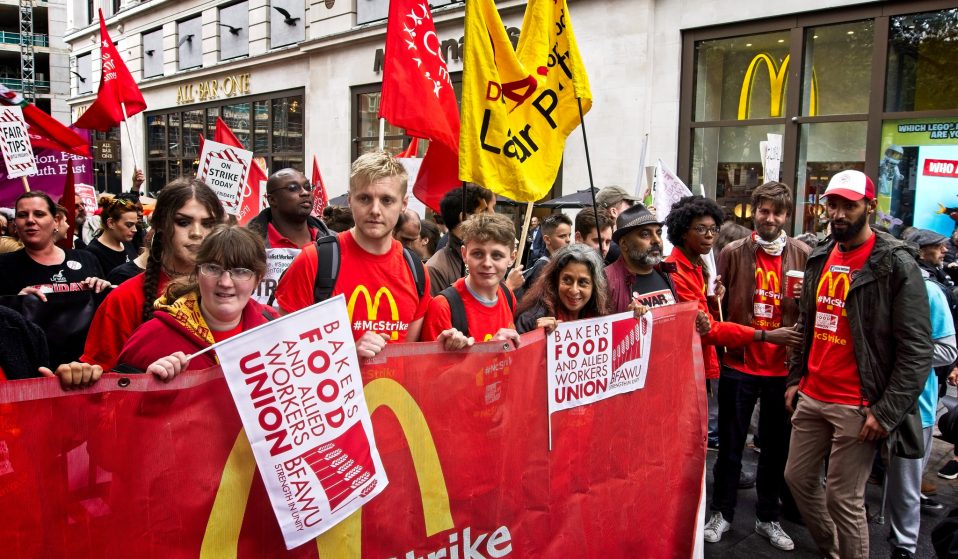 Companies like McDonalds, Deliveroo and UberEats need to learn how to treat their workers, argues Dawn Foster. Collective action is the only way to teach them.

Companies like McDonalds, Deliveroo and UberEats need to learn how to treat their workers, argues Dawn Foster. Collective action is the only way to teach them.

Don’t go to McDonald’s today. Don’t go to Wetherspoons either. Most people probably won’t go to TGI Fridays anyway, but if you’re at home and contemplating a takeaway, don’t use Deliveroo or UberEats.

Rather than being a food snob, I’m encouraging you not to cross a picket line today, of the low paid workers in these establishments. The bar staff, cooks, couriers and waiting staff are demanding £10 an hour from their well-remunerated bosses, working with the IWW union, a punchy and agile union that specialises in organising workers in roles that have been designed specifically to make union organisation and recognition hard.

Zero hours contracts are exploitative in so many ways, but trying to organise a union branch in organisations where they’re rife is intensely difficult. The employers using them know this. The most obvious aspect is money: if your wages ebb and flow with little opportunity to predict when you’ll be skint and when you’ll be comparatively flush, paying monthly subs to your union can become impossible. In the past, I’ve cancelled my union membership three times, because the choice was between that direct debit going out, or me eating that week.

The more insidious part is how zero hours contracts affect social solidarity and camaraderie. As a teenager, I worked in a large supermarket chain on a zero hours contract. On our first day, we were bored into a coma by the induction videos, then a very intense man from human resources told us, as he was legally mandated to do, that there was a recognised union in the supermarket but – crucially – there was also a company-run ‘jobs club’ where we could come to catered meetings and give ‘job feedback.’ This option was £3 a month cheaper than the union.

'If we don't get it, SHUT IT DOWN!' as McDonald's workers in Brixton strike for £10/Hr and a union #FastfoodGlobal #McStrike #FFS410 pic.twitter.com/njSJ5UvTlH

Naturally I joined the union, aghast at this naked union-busting and astounded they offered to charge people to complain about their jobs. But plenty of people with less knowledge of the structures of unions doubtless signed up, paying part of their minimum wage earnings to a company that were cynically stiffing them.

Then came the rotas: with no guaranteed hours, bosses were free to choose who to dole hours out to. A group of us were hired as seasonal staff before Christmas, and it was immediately obvious they had chosen to hire more people than they needed. I was a hard worker, and got on with my managers easily. Another guy was a little socially awkward and slower to pick up the routines and company procedures, clumsy in his dealings with customers. One woman had a three-year-old child, and was late once, and shortly after had to cancel a shift when her childminder was ill. A woman I’d gone to school with had a habit of being late. Within weeks, these workers found their name appearing on fewer and fewer shifts. One woman slightly older than me saw the power dynamics at play in the tyranny of the rota, and went out of her way to draw the managers’ attention to latecomers, and ratting out anyone who made an error, purely in the hope of scooping up more shifts by depriving others of the opportunity.

These occurrences were a feature, not a bug: mooted as a way of improving flexibility for both the employer and employee, zero hours contracts deliberately leave you entirely at the mercy of your managers’ whims. Increasing precocity in the workforce, through the shift from contracted employment to false self-employment, leaves you dependent on a good relationship with your manager. That, in turn, means not complaining about pay and conditions, or the fact you’re deprived of sick, holiday and maternity pay, and pension contributions, because your boss has claimed you’re self-employed. The atomisation of work leaves you feeling isolated and increases your fear and risk of not earning enough.

The only solution is to work together. Young people in particular are pushed onto these dreadful contracts, and for years the Conservatives have trashed trades union powers in the hope of stopping action. Stories of how abysmal conditions are in Amazon distribution centres abound, the working conditions of couriers are appalling, and the stories of life in Sports Direct warehouses defy belief, so quasi-Victorian are they.

These companies aren’t struggling, they’re revelling in vast profit margins, and Jeff Bezos has more money than he knows what to do with. They could pay more and see little to no change in their profit margins. But they won’t unless they are forced to do so by collective action, and the workers refusing to put up with poor conditions.

Amazon this week announced they were raising wages for employees in their warehouses. This only came about because of a concerted and hard-fought campaign to get better pay and conditions and union recognition.

Younger generations are shafted often by the contractual conditions and poor wage growth the government have allowed to flourish, and isolated by the stress and nature of working life now. New unions like the IWW are fighting back, and showing that solidarity and working together works far better than individual lobbying for more cash and a better quality of work.

Linkedin
RELATED ARTICLES
OTHER ARTICLES
Proposals to introduce a minimum GCSE threshold for student loans will disproportionately affect those from marginalised backgrounds.
Over the years, a swimming hole in a city park has evolved into a magnetic meeting place for Philadelphians – a hideaway where people can connect with the natural landscape, and each other.
Whether it's partygate, the climate crisis or the spiralling cost of living, the fightback begins on the picket lines writes Tommy Vickerstaff
Over a dozen Stop Deportation activists locked themselves to each other outside a detention centre to prevent coaches taking those due to be on the Rwanda deportation flight from leaving.
The past five years have seen a staggering increase in foodbank usage across the UK. Now, staff fear things are set to get much worse.
Photographer Arthur Grace recalls travelling through the Soviet Bloc and finding ways to evade the surveillance of his work.