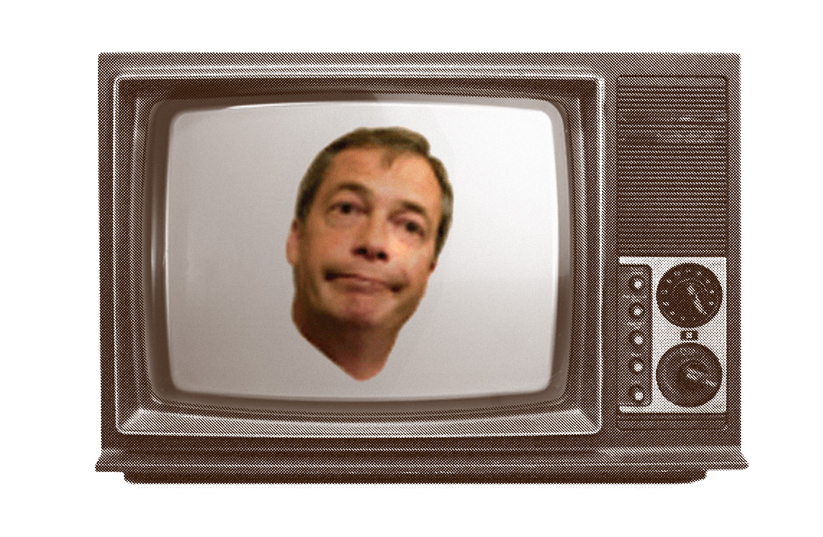 The British media has a lot to answer for: casually inviting far-right voices onto television and radio only emboldens and sanitises their ideas, and puts us all at risk.

The British media has a lot to answer for: casually inviting far-right voices onto television and radio only emboldens and sanitises their ideas, and puts us all at risk.

It’s been a summer of extremes: of temperature and weather, as we see the effects of climate change in undeniable daily evidence, but also of political extremes, with the further polarisation of global politics.

With Trump and the far right in the US continuing to unleash horrors with their horrendous treatment of migrants, rampant online hate speech, and declaring the free press the enemy of the people, the UK media seems now to be following suit; becoming fascinated with the movements behind Tommy Robinson, the former English Defence League leader.

With Nigel Farage hosting on LBC radio, the far right has their claws firmly embedded in the media, and with this tide, many politicians and commentators on the right are drifting further away from the centre. After ignoring repeated calls from Muslim organisations and the peer Sayeeda Warsi for an inquiry into the levels of Islamophobia in the Conservative party, the former foreign secretary Boris Johnson has been condemned this week for a column attacking women who wear the burqa. But for the first 24 hours of publication, no Conservative politicians spoke out against his words, and the prime minister has so far repeatedly ignored calls to condemn the article.

It’s no surprise how we got here: the past few decades have seen a bungled and misguided attempt to discredit and stop the far right by treating their arguments like any other. Farage, Robinson and their ideological bedfellows are fixated on freedom of speech as a means of forcing coverage and publicity for their ideas. That argument itself is flawed: freedom of speech does not entail freedom to access mass media platforms on demand, and neither does it protect the right to incite violence and hatred. But the media has been happy to platform fascists for years and play along, and they must now bear a huge responsibility for the fever pitch mess we find ourselves in.

The argument for platforming and debating fascists relies on the flawed assumption that, when challenged, their arguments will fall to pieces. The audience will see the errors abundant in their beliefs and be under no illusion that they are fundamentally wrong. The interlocutor will forensically dismember their spiel, and the bigot will realise the emperor has no clothes, hopefully abandoning their crusade.

Often, university debating societies will extend invitations to unabashed fascists, glutted with the prideful believe that their intellectual rigour will cause them to see the error of their ways. Fascism and bigotry will be destroyed by intensely clever young men, with eloquent intellectual acrobatics saving the day, reinforcing the liberal tenets of civilised society. It’s an argument that is deeply arrogant in its drive, but also fatally misunderstands all forms of hatred and bigotry.

People are racist, homophobic, misogynistic and transphobic, not because they took a wrong turn in their educational journeys, but because they are simply driven by hate. The arguments they make for bigotry are simply the outer decoration and window-dressing for a deep-seated fundamental hatred of difference. Racism is the brickwork and foundations of the house: arguments about culture clashes, overpopulation and mass migration are the plaster, wallpaper and furniture. Attack the argument, and they’ll plaster over the damage, yet the house will still stand.

There remains a belief too, that the proponents of bigotry are essentially stupid, academically wanting, and thus an easy target. This is a handy fairytale to tell ourselves, and one such reason why clips of clueless racists getting their facts wrong go viral: far easier to tell ourselves only the uneducated are fascists, and that a smart liberal with a propensity for misquoting Voltaire can destroy their worldview. When Nick Griffin led the British National Party, university debating societies were champing at the bit to invite him into the stage, convinced they could crush the BNP with a sharp argument, ignoring the fact that Griffin himself had studied law at Cambridge. The leader of the biggest fascist party at the time had emerged from the very culture his opponents deemed superior: he was one of their own, and time spent in a library did not inoculate against a hatred that was deeply emotional, not intellectual.

If public sparring genuinely leads to humiliation for the cheerleaders of hatred, why do they rarely decline such invitations? Hosting fascists at public forums gives them the veneer of acceptability they both need and crave: it says their arguments are valid enough to engage with, and promotes them on campus and television. Very few people will see the ensuing debate, but many more will note they have been invited – the furore over Griffin’s Question Time appearance trailed the actual event, and millions more people will have seen news stories around the controversy of his appearance than the arguments itself. The BNP collapsed in the years following the episode, but this was due to internal strife and mass financial disarray, rather than a distaste for the arguments put forward. While the BNP folded, UKIP and the EDL found both interest, votes and membership booming in different ways for them.

The arguments themselves then become mainstream: Tommy Robinson’s jail term garnered endless television segments barely mentioning the reason for his conviction – contempt of court – instead focusing on his flawed arguments about freedom of speech. Steve Bannon, Raheem Kassam and their fellow travellers have been interviewed within the media as though their credibility is on a par with any other political figure.

The mainstreaming of fascists gives license to other people to adopt their arguments – reading any of the columns by Melanie Phillips in The Times shows how accepted Islamophobia is in Britain. On the Sunday Politics, I challenged Phillips for claiming hatred against Muslims didn’t exist in the same way anti-semitism did, because a “phobia” is an irrational fear, whereas there was nothing irrational about hating Muslims. This is simply an argument that states racism against Muslims is impossible, because hatred of people based on the religious background of their ethnicity is both rational and desirable. The next day, she wrote the exact same opinion in The Times.

Boris Johnson then, is able to claim to be fair-minded and liberal by dismissing women wearing the burqa as looking “like letterboxes” and “bank-robbers”, and stating he will refuse to perform his duties as an MP to constituents who choose to clothe themselves in a manner he personally finds undesirable. When you have politicians blithely perpetuating Islamophobia and the far right casually given plenty of airtime, those who hold racist and bigoted beliefs become emboldened: they’re winning the culture war, as far as they’re concerned. They trash bookshops and threaten the staff, damaging books they deem ideologically suspect. They attack trade unionists, leaving them bleeding in the streets.

Extending the privileges the media usually reserves for law-abiding political figures and commentators to those on the far right helps mainstream their ideas. It acts as a Trojan Horse in public discourse, dragging the conversation over to the far right and massively endangering the safety and lives of millions of people in the process. The far-right incite violence against people. Lives have already been lost, with an MP murdered by a far-right activist in the UK, and a protestor killed when a white supremacist deliberately drove his car into a crowd in the US. Casually inviting the far-right onto television and radio only emboldens and sanitises their ideas, and puts us all at risk.

Linkedin
RELATED ARTICLES
OTHER ARTICLES
Following the release of his debut single, Deyaz talks battling addiction, dealing with his struggles through music, and building a budding music career from his living room.
Theo McInnes’s photos of the annual event provide an intriguing snapshot of contemporary Britain.
AI companies that develop image-generators using copyrighted artwork from the internet are coming under fire from artists who say that it amounts to theft.
Filmmaker Laura Poitras discusses her new documentary which traces the remarkable life of the artist-activist and the impact of her battle against the US opioid crisis.
Tristan O’Neill’s shots of dancers caught in moments of reverie at the height of rave’s golden age are a testament to the UK’s legendary club culture.
Activists and campaigners are fighting back against new laws that would seriously undermine the ability to take industrial action, calling it an attack on fundamental workers' rights.