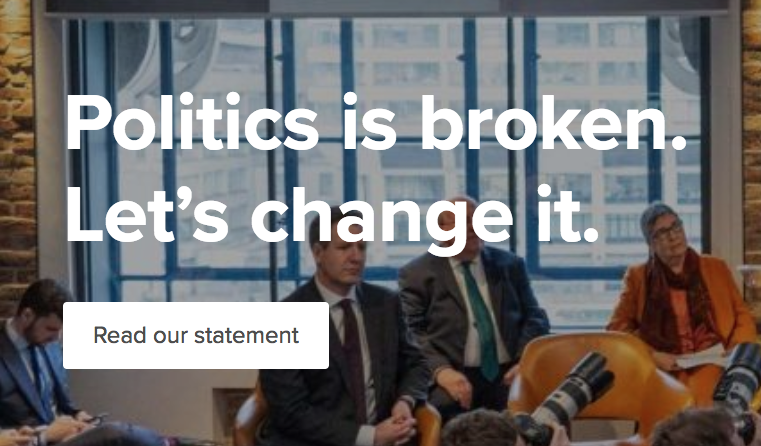 Chuka Umunna, Angela Smith and co want to fix Britain’s ‘broken politics’. But their ‘new way’ looks very much like the old one – only with greatly reduced influence, and no way of winning elections.

Chuka Umunna, Angela Smith and co want to fix Britain’s ‘broken politics’. But their ‘new way’ looks very much like the old one – only with greatly reduced influence, and no way of winning elections.

This morning, a lone podium stood in a room at London’s County Hall. Upon it was a plain sheet of white paper. In front, a collection of journalists, photographers and cameraman speculating about what was on it, and why they had been called there.

Eventually, the paper was dramatically ripped away by an aide, revealing the name: “The Independent Group”. In walked seven MPs, all of whom had sent an email to the Labour Party mere moments before, announcing their resignation. They were Luciana Berger, Mike Gapes, Chuka Umunna, Ann Coffey, Chris Leslie, Gavin Shuker and Angela Smith.

Since Jeremy Corbyn’s shock victory of the Labour Party Leadership election in 2015, there have been murmurings of discontent from within the Parliamentary Labour Party. These exploded in summer 2016, in the shape of the botched coup which led to a second leadership contest  – a contest in which Corbyn actually increased his share of the vote. In the years since, those murmurings have grown to muffled whispers, rumours and, finally today, resignations. These seven MPs are those who disagree with Corbyn ideologically; those who dislike his handling of the Brexit debacle; or those who feel personally attacked by the anti-semitism scandal that has plagued Labour.

During The Independent Group’s hour-long press conference, there were very few answers proffered to the burning questions that led to their departure. Perhaps the most insightful commentary of the morning came from the various BBC hot mics that picked up soundbites from journalists in the room. These included: “not going to lie, between this and Brexit, we’re actually fucked”, “the Conservatives are going to win”, and “he’s mad”, which was directed at Umunna, the newly independent MP for Streatham. Here’s why they’re probably not wrong.

THEY WANT TO TACKLE RACISM WITH… RACISM?

Today, a Jewish woman stood in front of the nation’s press and labelled a party that is supposed to be a bastion of progressive values and equality “institutionally antisemitic”. The fact that it has come to this should sadden everyone who wishes to see a world free of hate, bigotry and intolerance. It must be seen as an impetus by the Labour Party to do better, to reach out, to work more quickly, and more effectively to react to and deal with instances of anti-semitism within the party.

Unfortunately, The Independent Group are doing nothing to help. Within hours of the formation of a party that claims to be pursuing a “spirit of solidarity, tolerance and respect”, co-founder and MP for Penistone and Stocksbridge Angela Smith referred to BAME people as being “of a funny tinge” on Politics Live (she has since apologised). This was shortly after rent-a-racist Katie Hopkins gave the party her endorsement on Twitter.

did Angela Smith on live BBC TV just now *actually*, when talking about BME people, say "it's not just about being black or a funny tinge"?!?!??!?!!?? jesus fucking christpic.twitter.com/WKFwST0V9N

THEY FORMED TO STOP BREXIT, WHICH IS JUST NOT POSSIBLE?

The splintering was also prompted by the collective outrage surrounding Corbyn’s handling of Brexit. It’s no secret that, much like within the Conservative Party, Brexit is a divisive issue within Labour. There are those who believe strongly that Brexit is the single worst thing to happen to this country (it’s not), and that stopping it is the greatest battle of our time (also not). The question is, how is this new band of independent MPs going to affect the change they wish to see in the world? How are they going to stop Brexit?

The short answer is – they’re not? Seven MPs does not maketh a credible parliamentary force, and all of the agitating, the well-funded protests, the advertising campaigns and declarations of intent from those committed to reversing Brexit whilst within the Labour Party have not convinced enough of either the PLP, CLP or the general public to back them. It is impossible to see how seven MP’s from outside the party political machine hope to reverse Brexit, or even get a second referendum beyond attempting to play kingmaker at some point in the not so distant future.

….THERE ARE ONLY SEVEN OF THEM?

Politics, The Independent Group suggests, is broken. Its proposition to the country is to change it; to “reach out across outdated divides and tackle Britain’s problems together”.

So far, they have not been particularly successful in reaching out across those lines. Despite months in the making, hours of backroom conversations and talks, no other MPs, from any other party, appear to have been convinced by any reaching out.

What an overwhelming show of support already. Thank you. Challenging our website though – please bear with us while we bring it back up.

At the launch, Umunna spoke of a new movement, and a new way of doing politics. But very little detail has been provided to elucidate that point any further. No party, the seven have said, are fit for Government right now – but unless we change our party political system, rejig our elections to move away from First Past The Post and towards a system of proportional representation, the only parties that have any hope of being in Government are Labour or the Conservatives. For now, The Independent Group’s ‘new way of politics’ looks very much like the old one – only with greatly reduced influence or apparatus with which to fight elections.

THERE ARE LITERALLY NO POLICIES??

The Independent Group website (which crashed almost immediately after its launch) remains silent in terms of nuts and bolts policies. There are no pledges designed to manifestly change the lives of millions of people – the like of which saw Jeremy Corbyn’s Labour Party increase its share of the vote by more than any party leader since 1945. Instead, there was a brief mention of “crowdsourcing” policies at the launch – which, he stated, could not and should not be cooked up in Westminster.

The brutal truth about The Independent Group is that, for all the flash-bang of the launch, there seems to be very little substance. They are a collection of what appear to be very self-serving MPs – most of whom find themselves so far up the bank benches that they’re practically falling off them – that are ideologically opposed to the most popular Labour Party in generations. In Angela Smith, we find someone with connections to big business who supports fracking and wants to keep water privatised; in Gavin Shuker, an MP who has consistently voted against a woman’s right to choose; and in Chris Leslie, Mike Gapes and Ann Coffey, members of Parliament who voted for the war in Iraq, and against investigations into it.

The Independent Group is no more a viable political force than I am a viable Olympic bobsledder. Short term, the split once again throws bare the divides that exist between the New Labour establishment and the envigorated politics of the Corbyn Labour Party. But the reality is, hating Corbyn isn’t a manifesto: it isn’t really even a political position. It’s a vendetta  – and a sad one at that.

Linkedin
RELATED ARTICLES
OTHER ARTICLES
Over the years, a swimming hole in a city park has evolved into a magnetic meeting place for Philadelphians – a hideaway where people can connect with the natural landscape, and each other.
In her new book, the author explores the country’s housing crisis in human terms and calls for radical action to address a broken system.
Whether it's partygate, the climate crisis or the spiralling cost of living, the fightback begins on the picket lines writes Tommy Vickerstaff
50 years since its inception, and the campaign calling for recognition that capitalism depends on domestic labour is as pertinent as ever.
The author discusses the all-consuming nature of heartbreak, and turning the experience into an incisive exploration of love and loss.
The singer-songwriter discusses her intimate new project – and the advice she’s picked up across a career as one of rock’s leading voices.