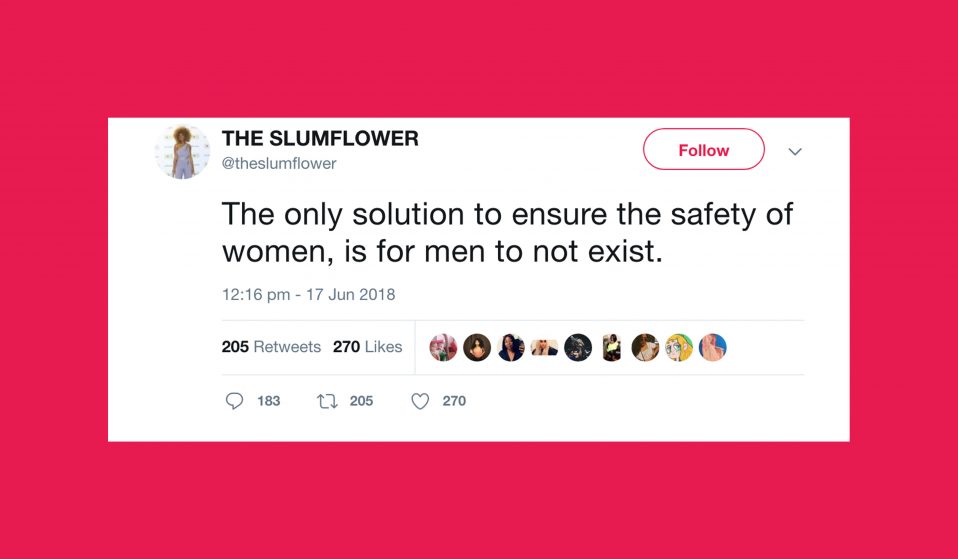 Chidera Eggerue has come under fire for pushing a brand of feminism that claims not to care about men, yet also seems intensely obsessed with them. But she isn’t alone.

Chidera Eggerue has come under fire for pushing a brand of feminism that claims not to care about men, yet also seems intensely obsessed with them. But she isn’t alone.

There are two camps of Feminism in the digital world; those that join the dance and those that lament LATE STAGE CAPITALISM’S COMMODIFICATION OF ALL-THE-THINGS!

I’ve turned off my proverbial caps lock button. More accurately, it was worn down, push by push, over many years of participating in feminist discourse online. What was dispiriting to me was the slow realisation that the dissenting camp is just as broken in its politics as the dancing camp is accused of being. A few years ago, I decided to disengage from basically all popular forms of feminist activism. I decided to focus my resources on the deep work of living in a way that makes the world a more liberating place for myself and other women, quietly. But ignoring problems doesn’t really make them go away, especially not when it pays to be problematic.

Enter Chidera Eggerue, professionally known as The Slumflower. She is the author of the bestselling book on self-love What a Time to be Alone, a TED Talk speaker, and the social media influencer behind hashtags #SaggyBoobsMatter and #BlockHimParty. It would be unfair to call Eggerue the problem. It’s not her, it’s what she represents. Given what can at best be described as liberally borrowing from other feminist thinkers her politics have always been a little wanting. Recently she morphed from body-positive spokesperson/ playfully abrupt agony aunt into a hyper-capitalist using the feminist label as a carte blanche for little more than raging misandry. A few recent, choice tweets (now deleted) include:

“I don’t have time to think about the reasons why the system you created at my expense to benefit you is now choking you…If men are committing s*icide because they can’t cry, how’s it my concern?”

“Men are murdering us and abusing children and you think I have time to theorise on why they can’t cry? Lmao not me hun.”

“Until young men are being married off at the age of six and having acid thrown in their faces for declining sexual advances, you can’t change my mind.”

If this was all you had heard of Eggerue before, you might be forgiven for assuming she is uniformly unpopular. Rather, an interestingly diverse set of people seek to defend and protect her both personally and in terms of her politics. Neoliberal writers and cultural commentators argue that any opinion held by a woman is valid and feminist, just a different type of feminism. Some academics and activists argue that pushing back against her is elitist gate-keeping. Young supporters who feel affirmed by her message of self-preservation, self-love and digestible, liberal interpretations of feminist theory feel deeply confused or offended when you speak against her.

Adding to this, there is a difficulty in critiquing Eggerue openly due to how easy a victim she is. She isn’t likeable. She doesn’t entirely fit in – with her Blackness, her roots in (pre-gentrification) Peckham, her university dropout status, and her youth. Despite her achievements and relative popularity, these qualities will do little to redeem her if and once certain elements of mainstream media decide her opinions are newsworthy, making it conflicting for those with honest intentions to openly criticise her. These dynamics are all due to Eggerue being one of the very few female voices – and specifically, very few black, female voices – represented in the media. Among feminists who are black there seems to be a collective consciousness that to go against her is to have even less representation, or to risk becoming the go-to black person used as evidence against the misogynoir levelled against her. So there is a tacit resignation among fellow black feminists to pick battles and leave her rhetoric under-challenged – admittedly, I am only writing this piece because white feminists in mainstream media who are ill-equipped to criticise Eggerue are doing exactly what many of us foresaw they would.

Nonetheless, these dynamics work perfectly to Eggerue’s end, which she plainly shares is to ‘secure the bag;’ keeping the pop feminist platitudes and the outrage flowing grows her platform, a tested means to the end of more money.  She intelligently navigates the dynamics that enable her, choosing which tweets to double down on and which to delete then tamely repackage to the press. While some might find this distasteful, it must be stressed that neither Eggerue nor any other opinionated person owes the Internet their agreeableness. At the very least, however, we all owe it to one another to be responsible and ethical.

I mostly question how a brand of feminism that claims not to care about men, seems so intensely obsessed with them. Whilst Eggerue is ‘guilty’ of all of the above, she isn’t alone. Followers have said that she admits coming into her ideas on self-worth and feminism after spending over a year getting over a man she had dated for three months. I think deep, unresolved pain is most people’s route and anchor to Popular Feminism. Whilst the movement can be a powerfully cathartic force for its participants, it isn’t healthy or sustainable for that pain to remain unresolved, unstudied. All it truly is, is profitable. Yet whenever The Slumflower decides to pursue new business, the opportunity won’t disappear with her. We, the varying stakeholders, will simply bestow the social currency upon another charismatic personality, and another, and another because Pop Feminism necessarily fails to dig deeper than the idea of equity and liberation favouring go-getting individuals. This is the problem.

Esmé is a writer, entrepreneur, and author of the new eBook Everyday Wellbeing available in May 2019. Follow her on Twitter.

Linkedin
RELATED ARTICLES
OTHER ARTICLES
Photographer Melanie Nissen recalls capturing the characters, fashions and rarefied chaos of a rapidly-expanding set of punk bands who helped to redefine the genre.
The novelist discusses his electrifying debut, which offers a deft examination of masculinity under late capitalism.
In Sheffield, food delivery drivers are fighting back against one of the giants of the gig economy.
The musician, DJ and founder of Monika Enterprise reflects on a career defined by revolution and rule-breaking.
Photographer Yan Morvan revisits a radical moment in history, which saw the emergence of a fiercely-rebellious spirit among the UK‘s youth.
Despite the easing of Covid-19 restrictions, the issue of over-policing on university campuses remains.