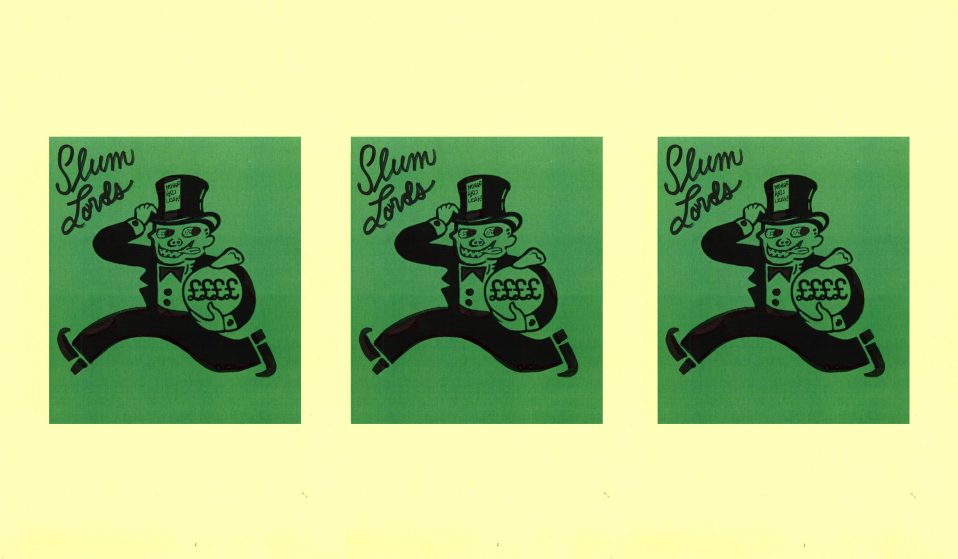 Our engorged property market – and the ensuing housing crisis – has become a cornerstone of the British economy. Those who actively profit from it shouldn’t be absolved.

Our engorged property market – and the ensuing housing crisis – has become a cornerstone of the British economy. Those who actively profit from it shouldn’t be absolved.

There are, broadly, two types of people in this world. Those who think landlords are price-gouging parasites, and the landlords perpetually surprised that everyone despises them.

Usually when you make a perfectly uncontroversial statement like the one above, someone – probably a landlord – will take exception. They will usually acquiesce that: there are some ‘bad’ landlords who are exploitative and deserving of extreme vitriol, sure, but these rotten eggs aren’t representative of landlords as a whole, many of whom are honest, hard-working, ‘good’ landlords. The purpose of this article is to say: no, there aren’t. It’s to reiterate what ought to be said all the time: there are no good landlords, only varying degrees of bad ones.

I understand why people are landlords. For one, it’s encouraged. By endless celeb-fronted telly about getting the best bang for your buck; by high streets populated almost exclusively by estate agents and banks gagging to give you buy-to-let mortgages; and by successive governments who – through a series of measures (financial deregulation, relaxed regulations around rent, a transferal of Britain’s social housing stock to the private sector without replacement) – have allowed basic shelter to become speculative assets, and for our engorged property market (and ensuing housing crisis) to become a cornerstone of our entire economy. But you shouldn’t listen to this encouragement. There are no good landlords.

Research by Heriot Watt University found a housing need of 4.7 million across Britain, requiring 340,000 new homes to be built every year until 2031 to make up the shortfall. Last year, we only built 160,100. In fact, house-building is at its lowest peacetime level since the 1920s. This deficit is fantastic news if you’re a prospective landlord: rudimentary economics follows that if supply doesn’t meet demand (and turns out people will always want shelter), the value of property increases. The potential for property to generate wealth by being let also significantly increases its value. The more additional homes bought by landlords, the more the housing stock becomes depleted. The more unaffordable property becomes to an increasing number of the population, the more have no option but to rent, and to accept market rent.

The entire system is weighted in favour of those with the means to become landlords. The more they artificially restrict the supply of an essential component of living, the more money they make. Research shows the average buy-to-let landlord earns more than twice the average national salary. Even if their rental yield amounts to less than expected, they still have an asset – which will have likely continued to appreciate in value – making it as close to a no-risk investment as you can get.

At the same time, according to Shelter, the UK has 320,000 people rendered homeless. There are 131,269 children classified as either homeless or living in temporary accommodation (roughly one in every 103 children.) While the threat of homelessness is an aberration on our society, it’s a positive boon if you’re a landlord – an entirely effective means of forcing tenants to accept absurd rents for dreadful unsafe box rooms. If 1.15 million people are already on waiting lists for social housing, if the construction of social housing has dropped 80 per cent in a decade to just 6,463 last year, if the average house price is eight times the UK average wage (and as high as 14 times that in London), then what choice do you have?

Sky News anchor (who also happens to be a landlord) decides to turn an interview about housing policy into an irrelevant and patronising rant about her tenants pic.twitter.com/ITlohPAVip

If you’re a prospective first-time-buyer who isn’t earning £64,000 (or £106,000, if you’re in London) next year, then it’ll be virtually impossible for you to get on the ladder. You either rent, or you’re on the streets. According to the ONS, 27 per cent of English tenants’ income goes on rent (49 per cent in London), while Countrywide figures show that rents have doubled between 2007 and 2017. With wages stagnating and rents increasing, it is absolutely correct to say that landlords both create and profit from the existence of poverty and homelessness. Shelter’s Polly Neate cited eviction from private tenancies as “the single biggest cause of homelessness.” Landlords are able to generate wealth precisely because there is wealth inequality. They issue their own exorbitant private tax on being poorer than they are. There are no good landlords.

There is a farcical counter-argument, most recently invoked by the likes of the Residents Landlord Association (RLA), that landlords are philanthropists doing a social good. The logic follows that, without their generosity, letting their properties to the public, there will be mass homelessness. In this obvious delusion, landlords buy property because the poorest can’t afford to themselves, in order to provide them somewhere to live for an affordable rate. It requires you to believe that property would retain its value even if there weren’t means of generating rent-seeking income. It also paints landlords as vindictive sociopaths, and demands we appease them, or else they will take their ball and go home. It suggests that if they are forced to endure mild encroachments on their ability to generate wealth from inequality, landlords will take all their properties off the market out of spite, to keep them for themselves for no discernible profit, so as to deliberately make people homeless. Last year, a Conservative(!) think tank concluded that buy-to-let landlords had prevented 2.2 million families from homeownership. There are no good landlords.

A landlord might reach thus far, and feel that all this criticism is a little harsh. They are an individual, after all, and housing issues are systemic. It’s hardly fair to hold them personally responsible. And to a degree, it’s not unreasonable. And to some degree, it is. FactCheck analysis found that 123 MPs (almost a fifth) are private landlords, compared to two per cent of the general public. Among them, 28 per cent of all Tory MPs, our current ruling party. This represents an obscene conflict of interest. Laws protecting the rights and promoting the interests of landlords over tenants are being passed by landlords themselves. In 2016, one recent egregious example saw 72 private landlord MPs contributing to defeating a Labour bill which would have required private landlords to make homes “fit for human habitation.” There are no good landlords.

Beyond the obvious extortion of having to hand over half of my earnings just to have somewhere to live, an act which necessarily prevents me ever accruing enough savings to own property; beyond the risible degradations inflicted on me by the worst landlords I’ve encountered so far; beyond the fact that having to move has essentially become an annual ordeal, necessitating whittling down all my worldly possessions to a little more than a few bin-bags worth of clothes, two-dozen or so books, a rucksack of documents and a laptop; there is something so utterly, tediously glum about the essential unhomeliness of the 10 homes I’ve spent the last 10 years of my life living in. Because I’ve been variously denied putting up decoration as paltry as posters or photos. Because I’ve left removal boxes unpacked due to feeling resigned to only having to repack them again when my rent inevitably gets jacked up 12 months down the line. Because the space I’m temporarily occupying is palpably not mine, and never will be. I do not live in homes, I live in other people’s assets. I am actually fortunate to have this as my current living situation, because the alternative is far worse, and the perpetual precariousness of losing it gives me untold sleepless nights. I have no idea how landlords sleep, except in unimaginable comfort that people like me help pay for. There are no good landlords.

So how do we get out of this purgatory? The Resolution Foundation predicts that half of all people born between 1981 and 2000 will be renting well into middle-age, and a third as retirees. BBC research found that the number of private tenants between the age of 35-54 has already nearly doubled over the last decade. These sound like things to be pessimistic about, but they also signal a tipping point on the horizon. Property speculators think their investments will be protected forever. They are gambling that moves which could curtail house prices – drastic increases in social housing, housebuilding, legitimately ‘affordable’ homes, the introduction of rent controls, enshrining of tenants’ rights, land value tax, inflation targets – will never be pursued, because the property market is so tightly intertwined with our economic model, that to jeopardise it would risk tanking the whole thing. And that’s perhaps true. But there will come a time in the not-too-distant future when millennials are middle-aged, and the generations below will be even more at the mercy of the property market. An overwhelming majority of the electorate will find themselves unable to ever afford property, while being asked to maintain an inhumane feudal economy which functions by perpetuating poverty over them. It’s an accelerationist thought, but it will hopefully be the harbinger of radical change. We can already see signs in the recent surge in support for organising groups like Acorn, Generation Rent and the London Renter’s Union.

In their 1979 book, Poor People’s Movements: Why They Succeed, Why They Fail, Frances Fox Piven and Richard A. Cloward write: “For a protest movement to arise out of traumas of daily life, the social arrangements that are ordinarily perceived as just and immutable must come to seem both unjust and mutable.” There are no good landlords.

Linkedin
RELATED ARTICLES
OTHER ARTICLES
In Sheffield, food delivery drivers are fighting back against one of the giants of the gig economy.
The musician, DJ and founder of Monika Enterprise reflects on a career defined by revolution and rule-breaking.
A new book traces the legislation’s tumultuous history and the lasting impact its had on LGBTQ+ activism today.
The novelist discusses his electrifying debut, which offers a deft examination of masculinity under late capitalism.
Hundreds gathered together to protest the policing bill by making as much of a racket as possible.
Photographer Yan Morvan revisits a radical moment in history, which saw the emergence of a fiercely-rebellious spirit among the UK‘s youth.