News & Politics / Opinion / Boris Johnson isn’t too powerful to be sacked, May is just too weak to do it 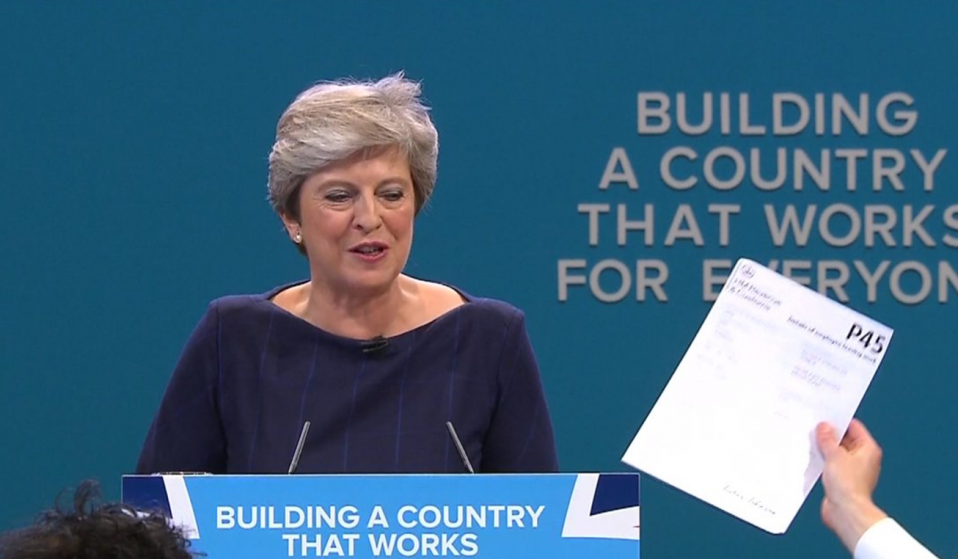 The Foreign Secretary isn't proving his might with his undermining and unpleasantries. Our weak and wobbly Prime Minister is just showing she has no authority to lead.

The Foreign Secretary isn't proving his might with his undermining and unpleasantries. Our weak and wobbly Prime Minister is just showing again she has no authority to lead.

I’ll be honest, I’d sort of forgotten this week was Tory Conference week. Scrolling through the images of an empty hall in Manchester, it seems like most of the delegates had too. After a smattering of damp, dull policy announcements hit the headlines on Sunday morning when the annual Tory jamboree got underway – policies the Conservatives hoped would woo younger voters but in fact just highlighted the lack of vision – it’s as if the country decided it just didn’t care.

Granted, the violence in Catalonia and horrific mass-shooting in Las Vegas have understandably dominated the news cycle, but be in no doubt that the conference of a party in government normally finds a way of cutting through.

It’s not that any of us were missing much by ignoring the grotesque get-together: Michael Gove spoke about pigs’ ears on stage, Andrea Leadsom told young people to start walking, Bear Grylls wore a Scout uniform, and there was some soul searching from our overlords attempting to work out where it all went wrong. This afternoon, as Theresa May coughed through her big speech, the highlight was a heckler yelling that they’d been asked by Boris Johnson to give her a P45.

Typically, Boris Johnson managed to attract some attention this week, fulfilling his regular mission of making everything about him. He got to work a few weeks back, penning a 4000-word rant in the Telegraph, which set out his vision for Britain’s exit from the European Union, completely undermining Theresa May’s already dwindling authority. He made a further intervention on Saturday.

Last night Johnson once again threw down the gauntlet, spewing out an unpleasant, insulting remark about Libya – that the war-torn country could become the new Dubai as soon as they were able to “clear the dead bodies away.” This man is in charge of our diplomatic relations.

It’s easy, comforting even, to write off Johnson as a gaffe-prone clown – but be under no illusions that he’s a calculating and conniving man. In fact, it shouldn’t surprise you if last night’s “slip-up” was all part of a plan. Johnson is flexing his political muscle, gearing up for another attempt to grab the keys to Downing Street.

He’s taunting May, goading her even; actively undermining her leadership and faking fuck-ups in an attempt to prove himself too powerful a prat to sack. He wants us to know that he’s a force to be reckoned with, to feel impressed that he can flagrantly take a shit on the floor while his cronies cackle and his frustrated colleagues just pretend it’s not happening.

But throwing tantrums and getting away with it isn’t a sign of strength on behalf of Johnson – all it does is further highlight the crippling weakness of this country’s zombie PM. Theresa May hasn’t got the authority to control her own cabinet, and yet she’s still clinging to power, either brazenly lying to herself or completely disillusioned with the notion that she has a future leading the UK.

When May appointed Johnson as Foreign Secretary back in July 2016 it was clearly an exercise in political tactics – keep your friends close and enemies closer. Giving Johnson a top job would expose his ineptitude while collective responsibility would keep him from straying too far out of line. Back then, May – despite having not won an election to become PM – was powerful, but if Boris Johnson survives Tory conference this year all it marks is just how far Theresa has fallen. The only sensible strategic decision she has made since forming a government backfiring right in her face.

Amber Rudd telling Boris Johnson to stand for May pic.twitter.com/VGYeb5CroR

Alexander Boris de Pfeffel Johnson really shouldn’t be a Member of Parliament, let alone a cabinet minister vying for the keys to Number 10. Sure, his life has been shrouded in the very same privilege that his colleagues are accustomed to, but his history says a lot about the man.

After finishing up at Eton and graduating from Oxford, Johnson gave journalism a shot, but was fired from his job at The Times for making up a quote and attributing it to an archaeologist. While Editor at The Spectator, he published racist and anti-Semitic language from columnist Taki Theodoracopulos. As Mayor of London, Johnson worried that his £140,000 salary wouldn’t be enough to support his lifestyle, keeping his column at The Telegraph which earned him a further £250k – a figure he grotesquely referred to as “chicken feed.”

He helped peddle the lie during the EU referendum that Brexit would see a further £350 million spent on the NHS every week. He has referred to black people as “piccaninnies” with “watermelon smiles.” And that’s just the tip of the iceberg.

For years Boris Johnson has gotten away with it, and – emboldened by his own warped sense of self-importance – he’s now taking it further. Any other leader would’ve fired Johnson weeks ago. This afternoon, Theresa May’s voice slowly faded as she addressed her party faithful from a podium, her words barely audible, struggling to speak, as Boris Johnson sat in the audience watching, only standing up to show his support for the struggling Prime Minister when Amber Rudd told him to. The stage began to fall apart behind her.

There’s probably a metaphor in there somewhere.

Linkedin
RELATED ARTICLES
OTHER ARTICLES
Yesterday thousands gathered outside Buckingham Palace after news of the Queen’s death broke.
With skyrocketing rents, packed out viewings, bidding wars and more, renting in London has never been harder.
By turning a real-life crisis into daytime television fodder, TV bosses have once again shown themselves to be completely out of touch with audiences.
In his 2008 series, the photographer pictured himself as Angela Davis, Martin Luther King Jr., Malcolm X, and other prominent figures.
The workforce is now gearing up for industrial action after receiving a measly pay rise, reports Ella Glover.
Photographer David Corio’s archive offers a glimpse inside a revolutionary era of music and nightlife.