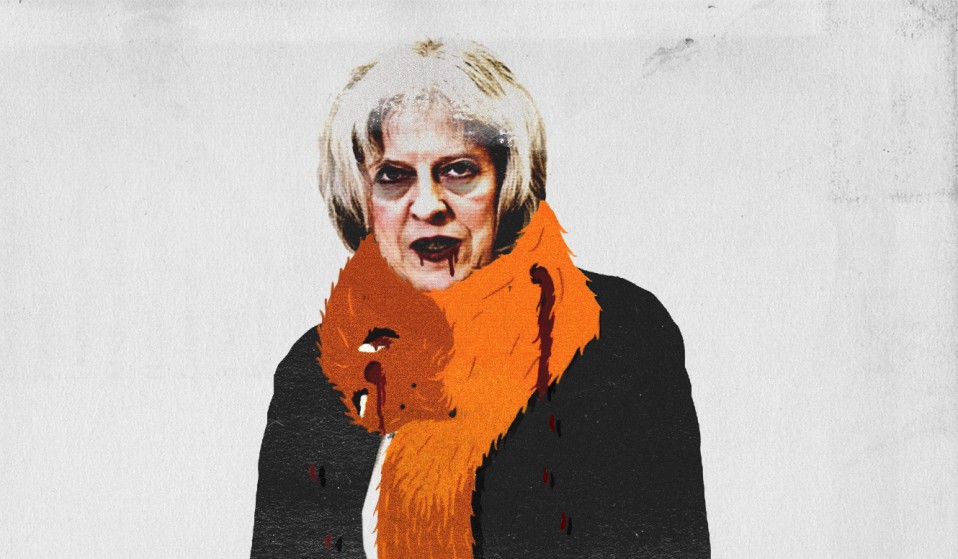 Of course Theresa May has pledged her allegiance to fox hunting, the ruling-class are reasserting their power in the most deranged, blood-thirsty way they know how.

Of course Theresa May has pledged her allegiance to fox hunting, the ruling-class are reasserting their power in the most deranged, blood-thirsty way they know how.

Blood will wash the land again. Theresa May has promised that if elected, the next Tory government will offer MPs a free vote on bringing back fox-hunting, of which she’s ‘always been in favour.’ It makes sense; fox-hunting is, of course, tradition. In the end, that’s the biggest reason to keep it dead.

Tradition is just power’s old name for itself; it’s what excuses an injustice that has no other excuse: it has to be like this, because that’s how it used to be. Ever since Brexit we’ve been sliding mournfully into our own past. Just as Britain is turning into something very modern – a failed state, where fascism drizzles down with the constant rain and the last living scraps of the social compact are turned over to a scavenging international capitalism – the political imaginary is wheeling back into its past.

The present is turning into a memory, populated by every rosy nostalgic horror – blue passports, imperial measurements, fox-hunting: as the country fades away, all its old ghosts appear by its bedside. Join us; sink down into the world of the dead.

But while blue passports or pounds and ounces are inexplicably popular (it’ll be non-decimal currency next, and soldiers in red coats and breeches, and some ghastly app-based version of the feudal mode of production), fox hunting is not. The British are happy to watch migrants drown at sea, but they’re very mawkish about animals; 84% of the public think it should stay illegal.

Theresa May’s promise to bring it back isn’t any kind of populist gesture; it’s certainly not about the rural Tory base, or the old ways of farm and field. Fox-hunters are just as likely to be from the city as they are to be from the countryside; what unites them is their class. If May repeals the hunting ban, it won’t be a gesture or a ploy for votes, but the full thundering reassertion of ruling-class power, screaming its ancient bloody hatred against the earth.

It’s easy – too easy – to condemn fox-hunting because it’s cruel. You could point out that the foxes are killed horribly, torn apart by dogs, and that the dogs themselves lead short and brutal lives; you could observe that rural foxes actually pose very little threat to livestock, or note that there’s absolutely no evidence to suggest that hunting actually keeps fox numbers down.

It’s not enough. To understand fox-hunting, you first have to realise that it’s not really about killing foxes at all.

If you were a blue-blooded country gent, heir to ten centuries of good inbreeding and polite barbarism, and you wanted to kill – to feel the blood of a living thing pulse warm and frantic through your fingers, to look into the fading eyes of a creature and know that its wordless depths of unknowable awareness are closing up forever, because you willed it – you already have that choice.

Long after the 2005 ban on fox-hunting, it was still perfectly legal for any blathering aristocrat to kill the creatures with guns or traps, or to unleash his weaponry against deer, or pheasants, or hares, or basically any of the poor harried creatures that still sulk the fractured and dried-up remnants of a countryside slowly wilting into motorway purlieu.

Our aristocracy have always been in love with death; the history of the nation is a thousand-year grouse-hunt, one long ritual mass slaughter in which every living creature everywhere in the world was permanently at the mercy of a gang of cretinous twits firing wildly in all directions for their own amusement and glory.

But with so many perfectly legal ways to kill, why are the Tories so intent on bringing back this one? It’s because fox-hunting is different. For a start, unlike so many other forms of death visited on the natural world by the blood-caked posh, it’s entirely abstracted.

It’s possible to understand the drive and fascination for violence and death; plenty of normal people get the same vicarious pleasures from films or video games. It’s a way of seizing power from a world that will eventually kill you, putting yourself briefly on the other side of that equation; even if you don’t like it you can understand why someone might want to pull the trigger and see something else drop down dead.

But in fox-hunting, there’s no immediacy in violence; it’s the dogs that do the killing, while the hunter just wears a ridiculous costume and honks meaningless words. Hunting is a far more strange, ugly, reptilian enjoyment; not the pleasure of killing, but a deeply ritualised pleasure in having caused to die.

The social anthropologist Edmund Leach describes some of the strange inversions that attend this practice:

“Foxes are hunted with packs of dogs and, at the conclusion of this ritual killing, the fox has its head and tail cut off, which are preserved as trophies, but none of this may be said in plain language. It is the fox itself that can be spoken of as a dog, the dogs are described as hounds, the head of the fox is a mask, its tail a brush, and so on. It is considered highly improper to use any other words for these things.”

The mask is the most significant here: the fox is, unknowingly, something in disguise; an actor, playing its part in a piece of social theatre. Stop thinking about fox-hunting in the terms they want you to – pest control, tradition, sport, even sheer libidinal cruelty. It’s a religious rite, the practice of the oldest cult in the country – our ruling class. What the fox-hunters really love isn’t simply killing the fox, but all the stupid ritual that goes along with it. The bugles, the red jackets, the code words, the mystery, the eternal magic of death. This is what they’ve been robbed of, and what they’re trying to get back.

And like all rituals, it’s a metaphor. What’s being dramatised in the death of the fox is political power itself; the ability of those in charge to order violence and keep their hands clean of it all, the ancient right over life and death that’s remained unchanged even if it’s now in the form of drone strikes and benefit cuts rather than public beheadings.

In fox-hunting, the sheer elemental injustice of class society is re-enacted, and worked through. And in the middle of it all, one small suffering creature runs for its life, an animal that can never understand the social madness that requires it to die.

Linkedin
RELATED ARTICLES
OTHER ARTICLES
The idea that a younger generation is abandoning work has become a popular narrative online, but it doesn’t necessarily reflect reality.
Yesterday thousands gathered outside Buckingham Palace after news of the Queen’s death broke.
Sean Maung’s photos are a love letter to the Black and brown communities that make up New York.
Thousands attended the annual event this year to wheelie through the city and call for ‘knives down, bikes up’.
Ahead of the release of their first collaborative album, the producer and rapper talk psychedelics and the state of UK hip hop.
The workforce is now gearing up for industrial action after receiving a measly pay rise, reports Ella Glover.