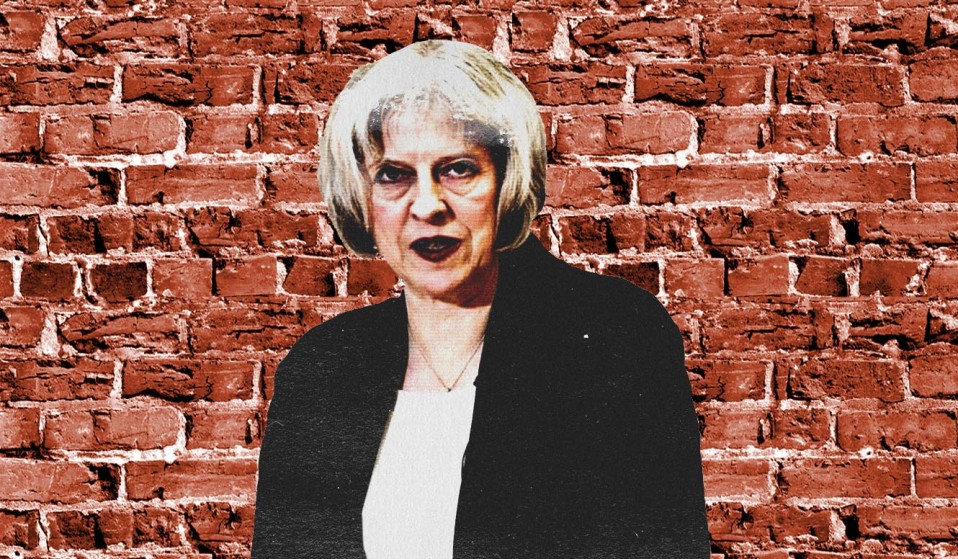 The Conservatives can't tackle the housing crisis, writes Matt Zarb-Cousin. Accepting the market is broken would be to admit Tory ideology is dead.

The Conservatives are flapping desperately as the housing crisis continues, writes Matt Zarb-Cousin, because to admit the market is broken would be to accept that Tory ideology is dead.

Looking a bit like she was delivering a speech poking her head out of a chimney, and in front of a faux wall displaying the brickwork of cowboy builders, Theresa May told an audience of industry leaders in central London: “There is nothing inherently wrong with renting your own home… you’re not less of a person for doing so.”

Reassuring to a grateful nation, including her tenants, who will be relieved to know that the Prime Minister doesn’t think any less of them for paying to live in her flat. Thank you very much, Theresa. And anyway, why would she when the rental income is enough to buy a new pair of leather trousers each month?

But her government’s rare foray into the territory of actually trying to solve the country’s problems isn’t motivated by people who choose to rent. It’s an appeal to those who want to buy, but can’t because the housing market is the only section of the British economy that’s actually growing at any discernible rate. So they’re stuck renting to pay off the mortgage of someone who happened to be born a few decades before them, when homes were cheaper. They now cost around eight times the average salary, and in 1997 it was half that. A decade of wage stagnation hasn’t helped matters.

Due in no small part to her refusal to let councils build more homes when they were sold off under right-to-buy, Margaret Thatcher’s notion of a “property-owning democracy” is fast turning into a property-owning oligarchy, and the Conservatives are now feeling the consequences right in the ballot box. Among homeowners, voter turnout in the 2017 election was unchanged, but for renters it went up eight per cent – among whom Labour widened its lead by a staggering 20 points.

This context explains why Theresa May announced a crackdown on developers hoarding land, a notion once denounced by the Conservatives as “the sort of policy you’d expect from Soviet Russia”. But devoid of ideas, the party of government have no choice but to nick them from Ed Miliband, a guy who no less than three years ago they were calling a communist.

So this is the quandary the government finds itself in. If people don’t own homes, they are less likely to feel like they have a stake in society, and the “property-owning democracy” that has fuelled the electoral viability of the Conservative Party will cease to exist. But, paradoxically, the Conservatives know that they’ll only begin to address the housing crisis by going against everything they believe: accepting Labour’s philosophy of actually intervening in a broken market. So, they’ve been forced to concede that doing so actually works.

The Prime Minister’s record of actual policies matching the rhetoric is worse than property developer Taylor Wimpey are at meeting affordable housing targets (while, by the way, the Conservatives subsidise their profits with market-inflating Help to Buy). Despite her first speech on the steps of 10 Downing Street promising to prioritise “not the mighty, nor the wealthy nor the privileged” but working people, we’ve now had a government with no actual policy agenda for almost eight years, which has put public relations and internal rifts over the EU ahead of actual governing, and people’s lives have got worse as a result.

For May, the reality will have to live up to the rhetoric this time. But if it does, it will only provide yet more evidence that Conservative free-market ideology cannot solve the problems it has created. Labour recognise this, which is why Jeremy Corbyn went much further than reforming planning rules at the last election, pledging to build 100,000 homes a year for affordable rent or sale.

The Conservatives are caught in Labour’s “OODA Loop”, a military acronym that stands for the cycle between observation, orientation, decision and action, and the key is to cycle through this faster than your opponent. By reacting to the housing crisis so late, and in the wake of Labour’s bold and costed housing policies, the government is reduced to accepting the framing of its opponent, and can only offer a comparably weak, watered down version of the solution Labour’s proposed.

We’ve been here before. Jeremy Corbyn pledging to abolish tuition fees, and Theresa May then publishing a review into offering a discount on the cost of a degree. Labour committing to taking energy back into public ownership, and the Conservatives subsequently announcing an energy price cap, which their party described as “a con”, “a gimmick”, “Marxist” and “a total joke” when Ed Miliband backed it as Labour leader.

So if “Corbyn Lite” fails to make a sufficient impact, the logical next step for solving the problems Britain faces will be “Full Corbyn” – and without any meaningful or coherent solutions of their own, the Conservatives will be doomed to accept the paradigm shift.

Linkedin
RELATED ARTICLES
OTHER ARTICLES
Photographer Matthew Brookes recalls following a group of young people in Venice Beach living in search of the perfect wave.
On the fifth anniversary of the tower fire, around 18,000 joined the walk to remember the 72 dead and to demand justice.
Photographer David Hoffman recalls documenting the extreme wealth inequality around Tower Hamlets and Hackney int the 1980s.
The past five years have seen a staggering increase in foodbank usage across the UK. Now, staff fear things are set to get much worse.
The last few years have seen an increase in LGBTQ-led initiatives to feed the hungry, with many finding ways to stay afloat despite the challenges.
Over a dozen Stop Deportation activists locked themselves to each other outside a detention centre to prevent coaches taking those due to be on the Rwanda deportation flight from leaving.