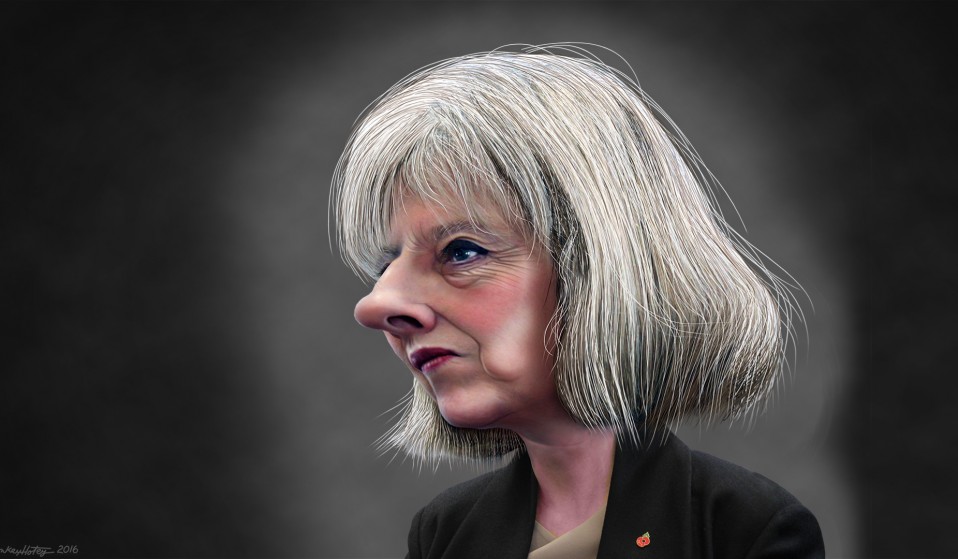 Theresa May won't stop banging on about 'strong and stable leadership' in this general election, but her version is the last thing the United Kingdom needs.

Theresa May won't stop banging on about 'strong and stable leadership' in this general election, but her vision of strength and stability is the last thing the United Kingdom needs. We're no longer a country of empire, it's time we pick a leader who reflects that.

You don’t need to be a fully-fledged member of the political commentariat to have noticed British Prime Minister Theresa May has a new mantra heading into this general election.

It’s the first time she’s led the Conservative Party into a nationwide vote, but rather than take to the campaign trail with a list of bold new policies for the electorate to consider, she’s got a short and simple slogan up her sleeve.

“Strong and stable leadership,” she’s yelling in the direction of anyone who’ll listen. These four short words, she hopes, will get her increased Commons majority in the bag.

But what does strong and stable leadership in this general election look like? The strength that Theresa talks of is yet to be defined, because the reality isn’t particularly pleasant.

The thing is, strength of leadership can’t mean trustworthiness to team Theresa, she lied time after time about calling this very general election. In fact, she’s had a funny relationship with the truth for a while.

It’s certainly not about being a well-loved and supportive team player, the exodus of staff from her office suggests anything but. It doesn’t mean being on the right side of history when it comes to her political positions either, just take her voting record when it comes to issues like LGBT rights.

Instead it seems that strength here is defined by something different, and it’s a trait we’re seeing mirrored across the globe. We seem to want political figures who show no signs of weakness, not like us mere humans but strong, ruthless, and detached.

It wasn’t over a pint at her local that May thought long and hard about calling this general election, according to Theresa it was during a mountain hike in Snowdonia when she decided come June we’d all flock to the polls. She’s married to a millionaire, she’s of course an Oxford graduate. May’s dressed, poised and posing immaculately in every election shoot, she looks hugely uncomfortable talking to children and adults alike.

Compare this to Jeremy Corbyn, the only politician likely to be able to come close to kicking May come June out of Number 10. We’re regularly treated to pictures of the Labour leader looking scruffy in his garden with critical captions, for donning a santa hat he was resolutely mocked.

A Huffington Post focus group last week, filled with men and women from “ordinary working families” in Slough, were asked what they made of both Labour and Conservative party leaders.

“His garden: have you seen the state of it?” said an alarmed plumber named Dan when asked about Corbyn. “He’s a wet blanket,” exclaimed another. Barely any criticisms raised about the Labour leader related to policy or political positioning, it was the vision of him as a strong leader they struggled to accept.

Sure, most of us will never meet either the Prime Minister or the leader of the opposition, we’re reliant on how the media portrays and presents politicians to us each and every day. But this isn’t just a mainstream media conspiracy theory, the way Corbyn lives his daily life is much more in tune with you or I than we’re used to witnessing.

May is being painted as the latest in a line of global leaders in whom we cannot see ourselves reflected; the corridors of power filled with figures nobody like us.

Vladimir Putin rides topless on horses through the Russian countryside, he’s a cold-blooded, stone-faced machine. In the United States Donald Trump is nothing like an “everyday American”; a multibillionaire from a wealthy background, from his narcissism to his private golf course he has little in common with those who are lending him their support.

The world right now seems a dangerous place to navigate: nuclear war could break out at any moment, the impending doom of climate change puts humanity right on the brink. In Britain we’re facing Brexit, our future more uncertain then ever before.

Maybe just can’t face seeing ourselves reflected in those who take the reins of the nation today, maybe we think people like us just shouldn’t be trusted.

But as a post-Empire Britain heads into a new post-Brexit era, the international landscape looking increasingly complex and bizarre, isn’t it time we accept our Prime Minister can have flaws, be human, have traits that are shared by plebs like us?

Should we not be looking at policies and pledges that will impact our daily lives as we move into this election, not who’s better looking in a power suit or which leader’s garden looks more unkempt.

Maybe the country would even be better off if run by someone a little more relatable; who knows what it’s like to desperately need rent caps or an increased minimum wag. Someone who wouldn’t need a pre-interview briefing to know the price of a pint of milk. To have someone in power who can relate to bread and butter domestic policies, who’s not got an ego that drives them to look at foreign nations and invade. Someone who, and hear me out here, would think twice before pressing the nuclear button.

It’s in fact a sense of humanity that’ll make our future tenable; a willingness to adapt, to learn, to sit quietly at the back. For too long we’ve been told to think that signs of ourselves, of fallibility, in a political leader are traits that we should not desire; that we shouldn’t be able to relate whoever is serving in Number 10.

The reality is that we are no longer that great of a Britain, yet our inflated delusions of self-importance run wild to this day. You only need to read the damning reports from May’s disastrous meeting with EU figures last Wednesday, rampaging through a room full of European counterparts with no intention of diplomacy; she’s been described as “deluded” for thinking the rest of Europe were also giddy on the idea of Brexit being red, white and blue.

Strong and stable leadership could mean being someone ordinary in power, someone kind, someone reasonable and fair. Who knows? Maybe someone with less ruthlessness, less ego, might not piss off the European Union at the start of the Brexit negations, they might even keep us out a nuclear war. If strong and stable leadership is what May is offering I’m not sure I want it.

Linkedin
RELATED ARTICLES
OTHER ARTICLES
A recent High Court ruling against the right to wild camp in Dartmoor National Park sparked the largest land protest in history – and campaigners say their fight is not over yet.
Photographer Sean Maung reflects on documenting a small town in Pennsylvania afflicted by high levels of unemployment, poverty, violence, crime, and addiction.
Since 2007, Gideon Mendel has made 20 trips to document floods in 13 countries. The result is an alarming record of what has already been lost to the climate emergency.
Following the release of his debut single, Deyaz talks battling addiction, dealing with his struggles through music, and building a budding music career from his living room.
AI companies that develop image-generators using copyrighted artwork from the internet are coming under fire from artists who say that it amounts to theft.
After blocking the Scottish government’s gender recognition reform bill, Westminster is now devising further changes to the law to make it harder for trans people to self-identify.