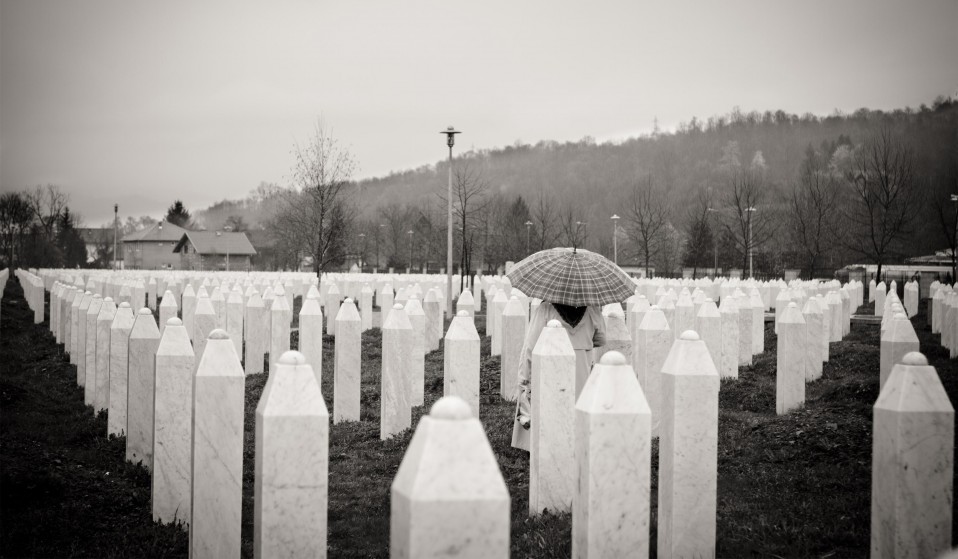 On the 20th anniversary of the Srebrenica genocide - in which 8,000 Bosniaks were killed during the Bosnian War - what has Europe learned?

Between 11-12 July 1995, more than 8,000 Bosniaks - mainly men and boys - were killed in the town of Srebrenica during the Bosnian War. Twenty years on, what can Europe learn from the continent’s worst act of genocide since the Holocaust? Michael Fordham, who worked as an aid volunteer and reported from the Balkans during the ‘90s, looks back on a recent history that we must never forget.

Last week I stumbled upon a beautiful little book whose subject matter is huge and horrific. Landscapes of the Metropolis of Death,  by Otto Dov Kulka, is a testament of the author’s time in the camps of Theresienstadt and Auschwitz when he was nine, ten and eleven years old. Kulka, a Czech-born Jew and now 82 year old Professor Emeritus at the Hebrew University in Jerusalem, survived the brutally efficient machinery of Nazi murder in a series of apparently random interventions of chance. The book is an almost hallucinatory, though scrupulously researched, reflection of the writer’s understanding of his unlikely survival and his own relationship with what he calls the ‘Metropolis of Death’ created by the Nazi regime.

It is twenty years ago this week that the massacres at Srebrenica occurred, between July 11 and 13, 1995. If relatively small in scale and different in context to that which took place at Auschwitz and other Nazi death camps, the events in Eastern Bosnia in July 1995 were a terrifying echo of the genocide that had been attempted across Europe half a century before. It was the worst crime on European soil since the Second World War, according to former UN Secretary General Kofi Annan.

Early on in his book Kulka recounts how an adult prisoner at Auschwitz’s familenlager, a huge Jew called Imre with ‘the big hands of a conductor’, taught children to sing Beethoven’s Ode to Joy – the last part of his ninth symphony to which German romantic poet  Schiller famously set lyrics. While the gas chambers processed their human traffic and the crematoria belched out the smoke of humanity, young Kulka and the other children interned there were accompanying the process by singing Germanic culture’s most searingly affirmative piece.

Ode to Joy has of course become the anthem of the European Union. History often throws up harrowing symmetries.

This week, the grand European project is embattled, locked in an unending fiscal farce. The economic future and the political integrity of Greece is at stake. But this may not be all that teeters on the brink.  The entire project of peaceful European integration could come crashing down with the fall of the Euro. If that apocalyptic notion seems far fetched, you only have to glance back twenty years.

In the time immediately before the breakup of Yugoslavia and the massacre at Srebrenica, the country was, much like Europe today, an awkward and unlikely union of vastly different cultures and economies. Slovenia and Croatia in the north and west were distinctly ‘European’ in temperament. Bosnia was in most part culturally and aesthetically Islamic in feel – though there was hardly a hint of any kind of hard-edged Islamist identity at large – and the Bosnian Serbs who lived in the hills and valleys surrounding Sarajevo were an altogether unique culture. Urban Serbia, meanwhile, with the Berlin wall having only recently fallen, was immediately recognisable as a Socialist state – replete with the stony certainties of modernist architecture, heroic sculpture and the dour aspect of Marxist-Leninist reality. Despite these contradictions the country was fascinatingly diverse. But everything was shot through with an angry energy.

I arrived on the Croatian coast on a ferry from Italy in the summer of 1990 – at the start of a quick trip before starting at university. I hopped on a train to Sarajevo and, after meeting a girl on the train, spent a few weeks there, partying with an intensity I had never experienced before. I made friends with Croats, Serbs from Belgrade, Bosnian-born Serbs, as well as kids from Bosnian Muslim backgrounds (who partied harder than anyone). We all hung out together at the university bars, in the rougher spots in Grbavica where I was staying and down in the Bascarscija, the old town at the Eastern end of the city. We popped pills together and licked wraps of amphetamine together and bitched about the absurdly popular Back Street Boys together. That angry energy was nothing that a chemical dose and a barrage of beats couldn’t transcend. After a mental summer I hitched back to London and to university slowly up through Serbia via Belgrade, up to Budapest and into East Berlin. It was a momentous time in Europe. Everything was fluid. Everything was open to question.

In the months and years that followed I watched from afar as the opening salvoes were fired in a war the likes of which Europe had not seen since my grandad was a kid. The optimism that came with the collapse of the iron curtain disappeared  as the ethnic cleansing began.  I first returned to ‘former Yugoslavia’ as an aid volunteer in 1995 – and then as a journalist in 1997. The housing estates where we had partied and crashed and where I had  fallen in lust with that Croat girl, looked like how I had imagined Stalingrad must have looked in 1943, when Kulka had been interned with the other enemies of the Reich somewhere between Theresienstadt and Auschwitz. Homes of families where I had sipped endless little cups of thick black Turkish coffee were desolate, devoid of life. We asked questions. We looked around in a mixture of horror and wonder.

On another trip, in 1997 just after the Dayton Peace Agreement that ended the civil war, we set out to explore how this had happened.  We were told it was happening again. There was a place to the east and the south, they said,  where history was repeating. This time the victims were the Kosovar Albanians. We took the bus through the hills and valleys of Bosnia and onto Kosovo’s flat expanse. There were random searches every few miles. We made it through the checkpoints and the roadblocks. We saw the smouldering remains of Kosovar villages. We were shown the bones of murdered grandfathers. We were shown the shat-upon family albums, the stinking wells choked with the cadavers of slaughtered cattle. We were warned not to wander through the mined and booby-trapped orchards that surrounded the pretty, red roofed Kosovar family compounds. Ethnic cleansing was happening here, now, around us. It was no longer an abstract notion. It had ceased for me to be mere mythology.

The lessons that these things should teach us is that no matter where you are and how supposedly civilised we seem to be – things can change. Civilisations rise, fall, destroy themselves. It’s easy to trivialise what’s happening in Greece, and what appears to be all around us here and now. The lens of history can make things appear distant, distorted. We like to believe that what happens around us here and now exists on an altogether other plane than that which hosted the horrors of the 1940s, or the compounds of Eastern Bosnia in the 1990s. But look around you. On the eastern edges of the mediterranean a medievalist regime seeks to conquer and murder all who don’t conform to their twisted creed. Homicidal emissaries of this creed seek to pierce the facade of mythology on your tube carriages and in your offices. The west’s leaders are hamstrung. The patient millions who put them into power are confused and divided. How are we supposed to imagine a response? Refugees from points south and east are meanwhile clinging to boats to take them to a supposedly more enlightened region. They are drowning in their hundreds. Fleeing in their thousands. In the south meanwhile, a fundamental fissure is appearing in the solidarity of this imagined eden – the one that Kulka showed us that Schiller and Beethoven celebrated so powerfully and whose musical manifestation shone like a light in the darkness of the death camps.

Things fall apart. The anniversary of Srebrenica should be a reminder. We must do everything thing we can to hold things together.

Linkedin
RELATED ARTICLES
OTHER ARTICLES
A 28-year-old from Texas was forced to travel across state lines for an abortion that would save her life and end a pregnancy that her baby had no way of surviving.
Danny Burrows discusses his new series of images documenting an pacifist anabaptist community who lead an alternative way of life.
To mark the premiere of his new documentary on surfing giant Gerry Lopez, the filmmaker and former pro skateboarder sits down to share his unique brand of wisdom.
Following the release of his latest album, the rapper talks about finding a new approach to songwriting, attitudes to poverty, and why his music is more than a political statement.
Last week, Tower Hamlets council removed its nudity-restricting licensing conditions in a huge win for London’s kink community.
Steel City is often overlooked when it comes to the country's cultural radar despite its role in shaping electronic music.