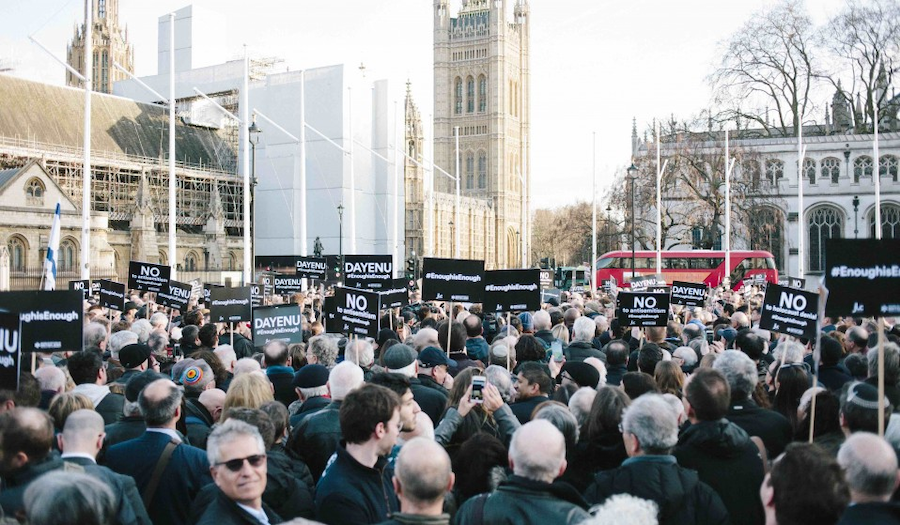 After the release of a damning report into Labour’s handling of antisemitism writer Em Hilton calls for an end to utilising oppression for political gain.

After a dramatic day which saw the release of a damning report into Labour’s handling of antisemitism and the suspension of former leader Jeremy Corbyn, writer Em Hilton calls for an end to utilising oppression for political gain

It’s not been a great 24 hours for Jewish socialists. The publication of the Equality and Human Rights Commission’s investigation into the Labour Party’s handling of antisemitism set off a chain of events that have once again shaken the ground under the left’s feet and have left many Jews feeling reduced to a political football.

I’ll jump right in and say this – Jeremy Corbyn’s statement about the EHRC report yesterday was reflective of an insensitivity and dare I say it, pridefulness that kept the discourse surrounding antisemitism unhelpfully situated in debates about individuals, their thoughts and behaviour, rather than as a wider structural problem. The EHRC report shows significant concerns about Labour’s handling of antisemitism, and the recommendations should be taken seriously. Antisemitism exists on the left, and we should acknowledge that fact and work to address it.

That being said, the decision to suspend Jeremy Corbyn from Labour, and remove the whip, once again reduces the issue of antisemitism to one of Labour factionalism. It was a decision that only serves to entrench the toxic divisions within the party and, ironically, to fan the flames of antisemitism.

Weaponising antisemitism to suspend the most publicly identifiable British socialist and anti-imperialist politician of the last twenty years (whatever your thoughts on his record) risks placing Jewish people in opposition to those values. This in turn perpetuates a cycle of antisemitism, in which Jews are conscripted as alibis to justify anti-progressive politics. It sows division between Jews and other racialised and marginalised groups while offering a shallow, zero-sum, basis for security and safety.

I will strongly contest the political intervention to suspend me.

I’ve made absolutely clear those who deny there has been an antisemitism problem in the Labour Party are wrong.

I will continue to support a zero tolerance policy towards all forms of racism.

There are some in my community, and in Labour, who will welcome Corbyn’s suspension as indicative of a new ‘‘zero tolerance approach’ to antisemitism, at best this is shortsighted, at worst, just plain wrong. Not least when you look at the disparity between the reprimands handed down to Corbyn ally Rebecca Long Bailey and Starmer ally Steve Reed for their respective antisemitism scandals this summer, both of whom apologised at the time.

We should be suspicious of politicians who fire shots across the bow at their factional opponents under the pretext of defending Jews. Both historically and contemporarily, the Labour Right has not shown itself to be as willing to challenge anti-black racism, anti-traveller bigotry or transphobia, so forgive me if I lack confidence in their approach to meaningfully address antisemitism. The consequence of the Labour’s right’s hierarchisation of bigotry is only further division of Jews from other marginalised groups who should be our allies in this struggle.

Overcoming this implicit hierarchy of prejudices requires situating the struggle against antisemitism in a broader anti-racist struggle. It requires those on the left who still relegate Labour’s issue with antisemitism as solely a ‘smear’ to reckon with the hurt and pain this causes Jewish members. In turn, we also need better political education as to how antisemitism operates and interacts with other structural racisms and systems of oppression.

It’s important to remember that no one has benefited more from Labour’s inability to get a handle on its internal woes than that Conservative Party. The characterisation of Labour as an inherently antisemitic has allowed for the Tories to capitlise on this moment and rebrand themselves as the party championing diversity and the working class. This is not a small feat, given the last decade of austerity, racist ‘hostile environment’ policies and the fuelling of a white nationalist, anti-immigrant agenda. The Left must recognise the danger of there being no clear public narrative of who is on the side of the marginalised, and seek to urgently remedy this.

Like the lawyer he is Starmer followed the brief and stood by Corbyn’s side for years no matter what.

Today it’s a different brief but highlights the same thing – he doesn’t do what’s right, he does what’s politically convenient.

The public won’t forget he propped Corbyn up. pic.twitter.com/NKRNQtupHn

For their part, the Jewish communal establishment organisations have by and large failed to show meaningful solidarity with other marginalised groups. From the Board of Deputies claiming that ‘no other minority would be treated this way’ while chastising Dawn Butler to dismissing the concerns and experiences of Jews of Colour who campaigned for a Labour government during the election, their lack of concerns for the plight of other communities has only served to isolate the Jewish community from its allies in the fight against racism.

The work to repair the damage this has done must continue to be a priority for the Jewish Left. It is a moment to confront how the politicisation of antisemitism has been used to fuel mistrust, and push us away from a proud radical Jewish tradition that has deeply connected us to historic movements for social and economic justice. Now is the time to build relationships with other groups let down by the political establishment. We must centre anti-racism, solidarity and united struggle against those who attempt to divide us. We must uplift and amplify the voices of Jews who are marginalised within our own community, often due to their own intersecting identities, be it race, class, or ability. We must recognise the opportunities we have for a new left movement, one that is able to meet the urgent threat that three consecutive Conservative governments have unleashed on this country.

What we don’t need to be doing, is having a renewed national deep dive into whether Jeremy Corbyn is or isn’t antisemitic, for there only lies pain.

Em Hilton is a member of Na’amod, a movement of British Jews against the occupation of Palestinian territories.

Linkedin
RELATED ARTICLES
OTHER ARTICLES
Rogue landlords are exploiting young and inexperienced renters and leaving them in mental and financial turmoil, reports Niall Hignett.
The two-day long event returned to London this year, showcasing a spectacular parade, steel bands and Caribbean food.
Financial turmoil is pushing people who work in the sex industry into more dangerous and desperate situations as a means of survival.
Photographer David Corio’s archive offers a glimpse inside a revolutionary era of music and nightlife.
Yesterday thousands gathered outside Buckingham Palace after news of the Queen’s death broke.
As the Scottish government announces a rent freeze, an activist with Living Rent who fought and won shares how they did it, and what must come next.