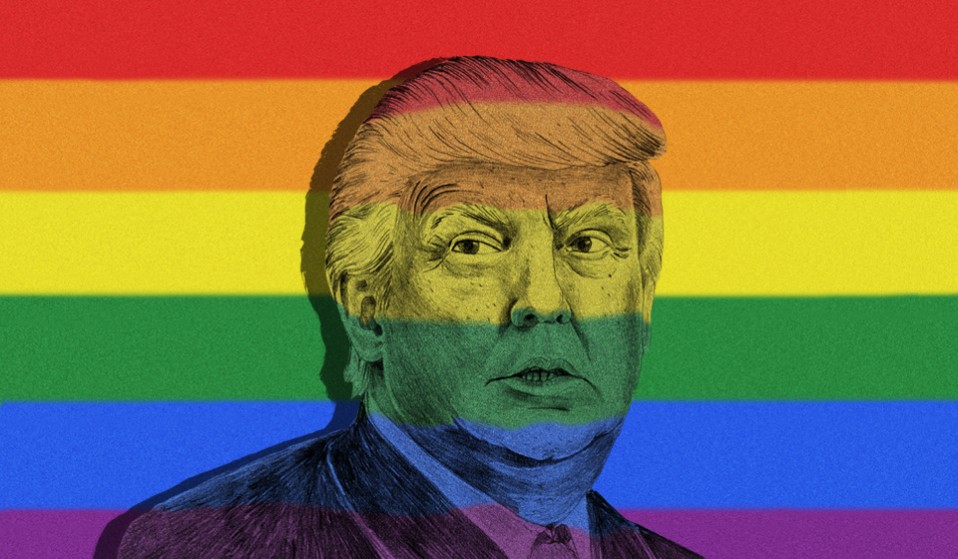 His banning of trans people from serving in the US military is a wakeup call: The fight for our freedoms is far from over.

His banning of trans people from serving in the US military is a wakeup call: The fight for our freedoms is far from over.

It’s comforting to think that our societies are always moving forward, that the march of progress is unstoppable as we make our way towards fairer, more equal times. For most of us who’ve really come of age in the 21st century it’s not hard to see why we for so long believed that to be the case. The political pendulum might well have shifted from left to right on both sides of the Atlantic, but when it comes to the fundamentals of human rights and equality it has felt pretty constant. Or it did in some ways, until today.

When it comes to the rights of LGBT people – our safety, security and protection in law – there’s no doubt we’ve a long way to go until the fight is over. From everyday prejudice to a mental health crisis, vastly disproportionate youth homelessness to bullying at school, there’s no doubt that there’s vital work to be done.

But when it came to legislation, to those in power passing laws, it often felt to me like the hardest graft was over. This week marks 50 years since Britain partially decriminalised homosexuality. Since then, the age of consent has been equalised, civil partnerships and same sex marriage legislation has passed through Parliament, and the Equality Act 2010 outlawed discrimination based on, amongst other things, gender, sexuality and race.

In the United States there’s been a similar picture painted – between 1996 and 2015 the Supreme Country ruled to recognise same sex marriages nationwide, banned discrimination based on sexuality, and struck down sodomy laws. While protections vary on a state by state basis, the law gives queers a better standing in the eyes of the law than they’ve ever had before.

Even within the US military – hardly an institution recognised for its progressive and open attitudes – so much has changed. Prior to 1993 LGBT people were banned completely from serving their country, but the introduction of the “Don’t ask, don’t tell policy” meant LGB could serve if they kept their sexuality to themselves. By 2011, they were allowed to serve, and on 30 June 2016 the ban on transgender people openly serving was finally lifted. Whatever you think of the US military, and believe me I’m far from a fan, the fact LGBT people had the option to conscript is important.

#Trump holds a rainbow flag given to him by supporter Max Nowak during a campaign rally !

And then, at 10am this morning Washington DC time, Donald Trump stopped this all in his tracks. Taking to Twitter he announced to the world that progress, as he sees it, has gone too far.

“After consultation with my Generals and military experts, please be advised that the United States Government will not accept or allow transgender individuals to serve in any capacity in the U.S. Military,” he typed. “Our military must be focused on decisive and overwhelming victory and cannot be burdened with the tremendous medical costs and disruption that transgender in the military would entail.”

It’s a stark and humbling reminder of how delicate and fragile our protections are. How easily, and how quickly, they can once again be snatched away from us by those determined to turn back the clock.

People often argue that our rights are confirmed, and that there’s no longer any need for Pride marches and protests. Today should remind us all that’s simply not the case.

People often argue that we shouldn’t be worried that our Prime Minister here in Britain voted against repealing S28 legislation, against the right for same sex couples to adopt, and against equalising the age of consent. They argue that we shouldn’t worry that a deal has been struck between the government and the homophobic DUP. Today should remind us all that’s simply not the case.

People often argue that it’s time reassess the LGBT acronym, that maybe it’s time the lesbian, gay and bisexual folks and trans people should say goodbye and go their separate ways. Today should remind us all that’s simply not the case. Trans people stood alongside lesbians and gays when they were on the frontline of the battle, LGBT people, minorities of all walks of life, must now stand alongside this community and fightback.

People often argue that we should have celebrated Trump waving a rainbow flag during his Presidential campaign, that it wasn’t co-optation and a piss-take but a sign of progress. The mask has now unequivocally slipped. Today should remind us all that’s simply not the case.

People often argue that the fight for LGBT rights is over in places like Europe and the United States. Today should remind us all, however painful it is, that it’s simply not the case.

The rights we have are by no means guaranteed, Trump today has served us a chilling reminder. Next time someone tries to tell you that LGBT people need to stop moaning, stop playing the victim and get on with it? Tell them we’ll stop when the battle is over.

Linkedin
RELATED ARTICLES
OTHER ARTICLES
With skyrocketing rents, packed out viewings, bidding wars and more, renting in London has never been harder.
Birdy Chu reflects on documenting the historic moment in which the territory was formally passed back from the UK to China.
A group of young Palestinians have found temporary freedom in the act of parkour, reimagining wreckage and ruins as a series of high-octane playgrounds.
Rogue landlords are exploiting young and inexperienced renters and leaving them in mental and financial turmoil, reports Niall Hignett.
By turning a real-life crisis into daytime television fodder, TV bosses have once again shown themselves to be completely out of touch with audiences.
Financial turmoil is pushing people who work in the sex industry into more dangerous and desperate situations as a means of survival.