News & Politics / Opinion / If Trump does make a sneak visit to Britain, he’ll see we (still) don’t want him 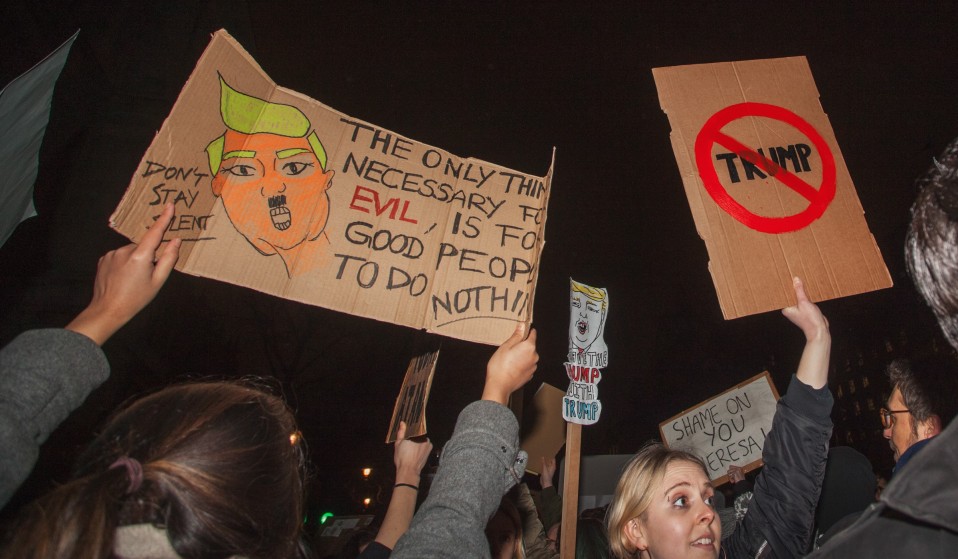 Even if Donald Trump only makes a sneak trip to the UK now his state visit has been cancelled, the British public will make it clear he's still not welcome.

Even if Donald Trump only makes a sneak trip to the UK now his state visit has been cancelled, the British public will make it clear he's still not welcome.

It was glossed over by the press, swallowed up by last month’s general election, and to be honest we just might not have even noticed it, so unused we have been in this country to a progressive cause achieving victory and its ideas gathering pace and support.

But just three weeks ago, on 12 June, it was announced that Donald Trump would be indefinitely postponing his state visit to the United Kingdom, just days after a general election saw Theresa May – who’d flown to the US to suck up to the prejudiced and bigoted American leader – lose an abundance of votes and seats.

What was set to be a fully fledged royal trip to Britain with all the pomp, regalia and red carpets, was suddenly delayed with no new date set for the fledgling President to meet our fledgling Prime Minister, a meeting in which they might once again allow their hands to gently embrace.

It’s almost hard to come to terms with the fact that the most powerful man on earth, the supposed leader of the free world, the Commander-in-Chief of a nation packing so much military might, cancelled a visit to a country with whom for so long a “special relationship” has seemingly endured, for fear of unrest and outrage from its population.

The news from Trump’s administration that the visit would no longer be happening wasn’t just a response to threats of mass protests on the streets, within days of a state visit being announced by the British government tens of thousands were already marching through the capital, outraged and indignant. The voices were diverse and angry, the message to our Prime Minister loud and clear.

Just months ago the idea that a popular, progressive social movement might be changing government positions and policy in the UK might well have been laughable, but it’s a sign of just how far we have come. This by all accounts was a win for progressive politics, for respect, for a nation increasingly rejecting the politics of division and hatred.

According to Trump’s people though, we might not yet be in the clear. Reports this weekend suggested that Trump instead might now be making a sneak visit to the British Isles, likely with little notice. The infamously bad traveller is traversing Europe for a series of high profile events – the G20 summit in Hamburg and Bastille Day in France on 14 July, and looks poised to make a pitstop on British soil.

It makes no odds if his trip last’s a day or seven, whether he’s welcomed with a twelve course dinner at Buckingham Palace or a simpler spread from the kitchens at Number 10. He must not be embraced and welcomed with any special privilege, he must not be treated as a wanted guest.

If he fills in the right landing card and pays in full his airport taxes, keeps track of liquids in his hand luggage and passes through security controls? Sure, it’s not for the UK Border Agency to stop him.  If he wishes to visit his golf course then so be it, but it cannot and will not be at our invitation, with our blessing, or paid for by the British public or the state.

We’ve seen already the sheer number of people who’ll hit the streets to tell Trump he and his bigoted views are neither welcome nor wanted here, and should his visit last just a few hours I have no doubt we’ll turn out to do the same.

Because the cancellation of Trump’s state visit exposed not just the cowardice of both Trump and our very on zombie PM, but of the ability of a movement to organise, to march and to win. The basis for his visit being cancelled was simple: the British people just don’t want him here.

Linkedin
RELATED ARTICLES
OTHER ARTICLES
A new exhibitions brings together the work of photographers who documented the deep unrest of these pivotal decades.
Theo McInnes’s photos of the annual event provide an intriguing snapshot of contemporary Britain.
Photographer Sean Maung reflects on documenting a small town in Pennsylvania afflicted by high levels of unemployment, poverty, violence, crime, and addiction.
A new film from Berghaus traces the story of Adam Raja, who left behind a turbulent upbringing to discover the healing power of climbing.
After building his reputation covering the US civil rights movement in the 1960s, the photographer went on to produce some of the most enduring images of the past century.
Since 2007, Gideon Mendel has made 20 trips to document floods in 13 countries. The result is an alarming record of what has already been lost to the climate emergency.