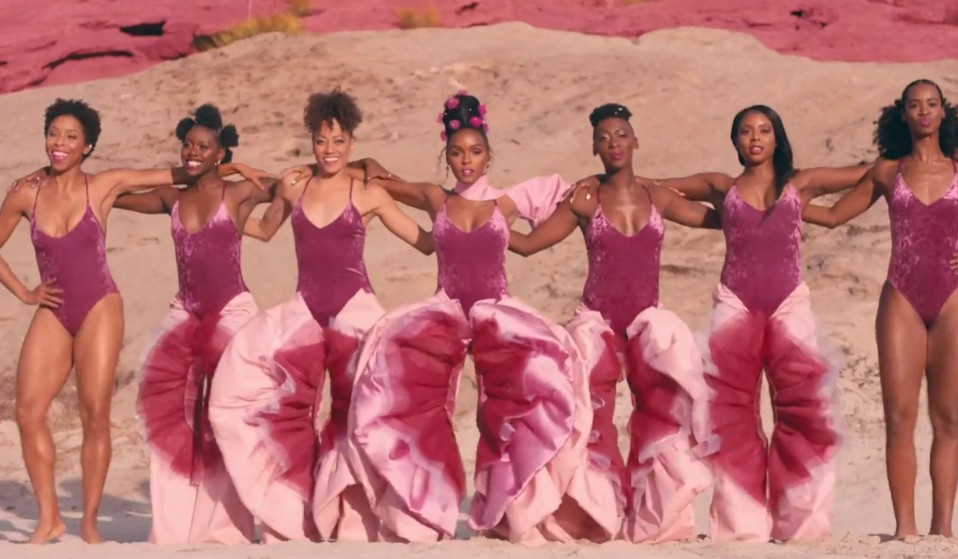 In her latest video for ‘PYNK’, released this week, Janelle Monae pays tribute to self-love, pink and ‘pussy power’. But are vagina depictions in modern visual culture really all that empowering? Polyester Editor Ione Gamble investigates.

In her latest video for ‘PYNK’, released this week, Janelle Monae pays tribute to self-love, pink and ‘pussy power’. But are vagina depictions in modern visual culture really all that empowering? Polyester Editor Ione Gamble investigates.

Earlier this week, ahead of her forthcoming album Dirty Computer, Janelle Monàe dropped her new single and accompanying video “PYNK” — a queer anthem, and an ode to self-love, ‘pussy power’, and all things pink. Set in the desert and featuring guest vocals from Grimes, the track is an unashamed love letter to queer sexuality, something rare to see executed on such a huge platform.

It’s hard not to beam with joy while watching Tessa Thompson being birthed from of Monàe’s vagina trousers, witnessing pubes popping out of pussy power pants, or feasting your eyes on the many, many vulva shaped fruit visual metaphors. But with all the positive representation the video showcases, Monàe’s latest output also raises a few questions. Most prominently, with an essential move towards intersectional and trans-inclusive feminism edging us away from one singular view of womanhood, are depictions of vaginas still necessary in visual culture?

If you’ve ever spent a few hours scrolling Instagram or Tumblr over the last five years, this won’t be the first time you’ve seen a grapefruit posing as a vagina. Artist’s throughout modern history have always loved to lean on the abstraction of anatomy, from Georgia O’Keeffe’s famous flowers to contemporary photographer Ashley Armitage’s pink satin bed sheet. But, while Monàe’s latest offering pulls on visual queues many are familiar with, “PYNK” still feels powerful, and a fresh take on old tropes.

Pre-“PYNK”, online discourse surrounding the inclusion of imagery centred around genitalia, body hair, and menstrual cycles was rife. Between vulva heavy ‘pussy grabs back’ protest imagery and the pink pussy hats worn across women’s marches worldwide, to artists reclaiming pubic hair and period blood on Instagram, it’s impossible to deny that the culmination of fourth wave feminism has developed alongside an aesthetic that heavily centres the normative, cis-female body.

Often work or iconography that heavily features vaginas — or other imagery associated traditionally with ‘womanhood’ — is exclusionary to trans people, and ignores the fact gender cannot be determined by genitalia. The rise of this aesthetic is also indicative of the problems of fourth wave feminism as a whole, in that it’s often extremely white, skinny, cis-centric, and ignoring of those that fall outside of our backwards societal beauty norms. Instead, the movement tends to uplift cis, white middle-class women before all others.

The problem with vagina-centric art doesn’t mean it should be eradicated completely. Many artists are capable of producing work that either deals with the vulva in a non-gender specific manner, or pulls from their own experience of womanhood to create personal work that doesn’t seek to generalise femininity as a whole.

As many artists actively move away from incorporating this type of imagery in their work, a new group of women are creating gender and queer inclusive platforms to school people on their anatomy and sex education. Take Maja Malou Lyse, who’s sex-critical approach uses lengthy Instagram captions and true-to-size clitoris sculptures to dispel myths about our sex and our bodies, or Eileen Kelly, who turned her reputation for provocative selfies into a fully fledged sex education platform. Filling in the gaps of knowledge about our bodies that traditional sex education so often fails to cover, it’s this type of work that helps shift our visual landscape away from individualistic, narrow depictions of vaginas for the better.

It’s in the same vein as the above mentioned that makes “PYNK” feel like a positive step forward. Featuring solely women of colour, both trans, cis, and of all body sizes; Monàe proves it’s possible to celebrate the power of pussy without creeping into ‘white feminist’ territory. Out and out celebrations of all things femme are still few and far between. From the pink filter engulfing half of the shots, to the onslaught of neon, pink fur, and all things fluffy, “PYNK” encourages women to embrace the stereotypes that have undermined us. With femininity still so fiercely both criticised and commodified within our culture, to see a group of femmes proudly celebrating their sexuality on screen is more than just empowering – it’s a necessary step to normalise and glorify identities normally ignored and marginalised by our society.

Linkedin
RELATED ARTICLES
OTHER ARTICLES
The author discusses the all-consuming nature of heartbreak, and turning the experience into an incisive exploration of love and loss.
For decades, an area of East London has served as a community hub for Vietnamese people looking for a taste of home.
Photographer Arthur Grace recalls travelling through the Soviet Bloc and finding ways to evade the surveillance of his work.
The past five years have seen a staggering increase in foodbank usage across the UK. Now, staff fear things are set to get much worse.
Photographer Matthew Brookes recalls following a group of young people in Venice Beach living in search of the perfect wave.
The curators of a new exhibition are hoping to shed light on Plymouth’s vibrant but often overlooked nightlife.