News & Politics / Opinion / To defeat ISIS, we must solve the refugee crisis 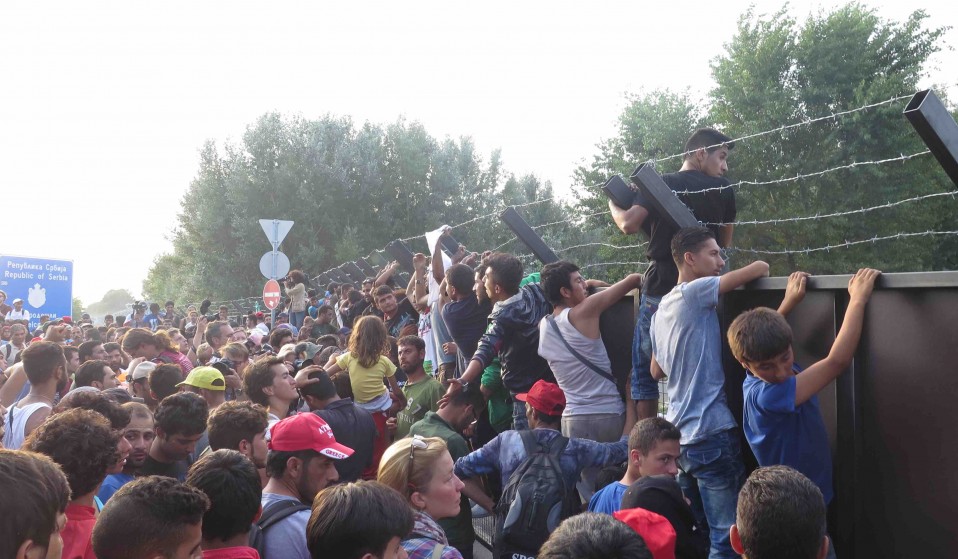 Shutting our doors to refugees and bombing Syria is exactly the response ISIS want. Alex King looks at why we can’t let them dictate our response to the Paris attacks.

Shutting our doors to refugees and bombing Syria is exactly the response ISIS want. Alex King looks at why we can’t let them dictate our response to the Paris attacks.

ISIS’ horrific attacks in Paris on Friday which left 129 people dead and more than 350 injured bore all the hallmarks of the terror group’s rise to power: ruthlessness, brutality and skilful propaganda. After grabbing attention by parading their British-accented executioner ‘Jihadi John’, once again their sickening brand of public relations has forced their message into Europeans’ minds.

Beyond terrorising peaceful citizens, if what ISIS want is for the Paris attacks to escalate hostilities and for Europe to shuts its doors on fleeing refugees, European and American politicians are following ISIS script to the letter. France’s first response to the attacks was airstrikes against ISIS targets in Syria.

Federica Mogherini, the EU’s high representative for foreign affairs and security policy, said all of the Paris attackers identified to date are European nationals. But news that a Syrian passport was found near an attackers’ body (which has since been revealed as a forgery) opened the floodgates to far-right politicians, such as Marine Le Pen, to call for sealing borders and refusing to accept any more refugees. Governor Larry Hogan of Maryland joined governors from 25 US states who have called on the federal government to cease resettling Syrian refugees to protect public safety.

This is exactly what ISIS wants — and they’ve said so. ISIS has been clear it wants to stop refugees fleeing Syria, telling them they are committing “a major dangerous sin” by seeking refuge in countries where they will be integrated into “Christianity, atheism or liberalism.” The terror group has used videos of drowned children in its propaganda and told refugees bound for Europe that they are throwing away their “lives and souls.”

Angela Merkel scored one of the West’s rare propaganda victories against ISIS earlier this year when she announced Germany would open its doors to Syrian refugees. As ISIS saw the outpouring of support from ordinary Germans and Austrians who stood at train stations and applauded the new arrivals, giving them water, food and toys. Seeing people flee their Caliphate and the scant support offered to Syrian refugees by many Muslim countries, ISIS went into propaganda overload, begging Syrians to return.

Analysts have suggested the forged Syrian passport found on one of the European attackers is likely an attempt to turn European public opinion away from accepting refugees.

Rather than sucking the wind out of their sails, Western bombing has proven a brilliant recruiting tool for ISIS, according to deradicalistion experts working on the streets of East London. Each bomb dropped sets back their attempts to persuade young Londoners not to wage jihad in Syria.

Nicolas Hénin, a French national who was held hostage by ISIS for 10 months, argues they know exactly what they’re doing: “The fact is we are trapped: ISIS has trapped us. They came to Paris with Kalashnikovs, claiming that they wanted to stop the bombing, but knowing all too well that the attack would force us to keep bombing or even to intensify these counterproductive attacks. That is what is happening,” he told the Guardian.

Shutting our doors to refugees fleeing the same terrorists who are attacking us makes no sense.

Well-managed, safe and legal processes for refugees to find sanctuary have been shown to reduce any security risks. Since 1990, the US refugee programme has welcomed almost 2 million refugees, including hundreds of thousands from the Middle East — none have gone on to commit acts of terror on American soil. On the other hand, betraying a generation by leaving them to languish indefinitely in refugee camps is a radicalisation time bomb.

Ending the refugee crisis is in Europe’s self interest, if it wants to keep itself safe and win the ideological battle against ISIS. But Amnesty International’s report Fear and Fences: Europe’s approach to keeping refugees at bay, argues that fencing off land borders and using countries such as Turkey and Morocco as gatekeepers, violates refugees’ human rights by denying them access to asylum, exposing them to violence and pushing them towards life-threatening sea journeys. The €175million invested in 235 km of fencing hasn’t protected anyone.

“Giving in to fear in the wake of the atrocious attacks on Paris will not protect anyone,” says John Dalhuisen, Amnesty International’s Director for Europe and Central Asia. “The numbers fleeing persecution and conflict have not gone away, nor has their entitlement to protection. In the wake of this tragedy, the failure to extend solidarity to people seeking shelter in Europe, often after fleeing the very same kind of violence, would be a cowardly abdication of responsibility and a tragic victory for terror over humanity.”

Linkedin
RELATED ARTICLES
OTHER ARTICLES
With the UK now set to run out of vaccines, people working in the sex industry – particularly outside of major cities – have been left especially vulnerable, reports Brit Dawson.
Protestors gathered outside Downing Street following the latest atrocities committed by Israel against Palestinians living in the besieged strip.
The government’s brutal crackdown on NGOs has left victims of rape without anywhere to seek help. And now, as the country plays a key role is Russia’s war, things are only getting worse.
Students are being left to languish in unsafe housing, in some cases leading to serious health complications.
Steel City is often overlooked when it comes to the country's cultural radar despite its role in shaping electronic music.
In the latest instalment of Photographers in Conversation, the creator talks portraiture, platforms and taking inspiration from Little Simz.