News & Politics / We mustn’t forget the injuries to #KillTheBill protestors 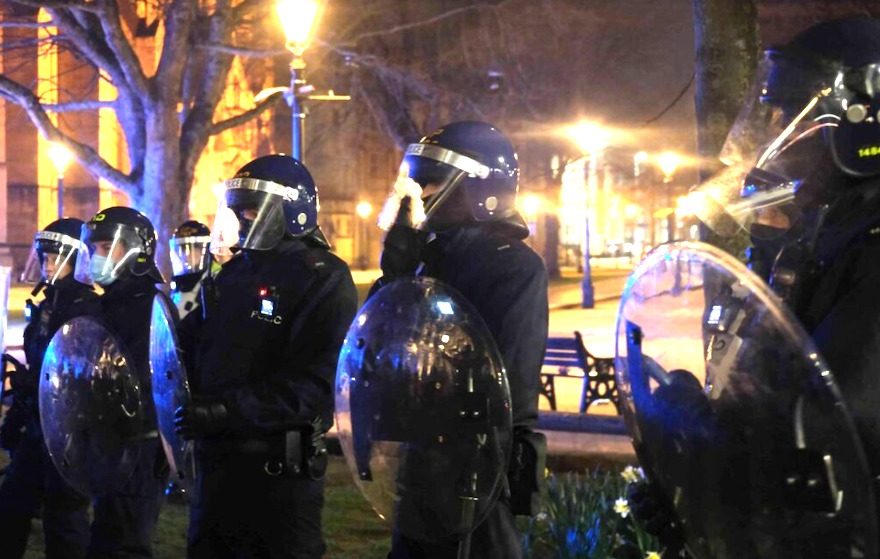 New figures from the police monitoring group Netpol reporting dozens of injuries to protestors across just three demos prove why we must fight against the Government’s policing bill.

I was breathless as I ran up the small ramp from the Broadmead shopping district in the centre of Bristol up to the city’s Bond Street. As I reached the top a young man leant against a wall, blood pouring from his head, matting his mousy brown hair to his skull. He looked over the scene glassy-eyed as a line of heavily armoured riot police advanced, batons drawn, screaming indecipherable demands and instructions from behind their visors. One of the protestors screamed, “Who do you protect?” in their direction.

The demonstration on Friday 26th March against the Government’s policing bill, which recently passed it’s second reading in Parliament, came after a week of friction and clashes in Bristol. The bill will give the police wide-ranging powers to stop protests which campaigners say amount to an assault on the fundamental right to protest enshrined in the Human Rights Act. A protest the previous Sunday in Bristol against the bill had seen violence erupt with protestors attacked with dogs, horses and pepper spray, a riot van set on fire and the police station’s windows smashed.

A demonstration two nights later on Tuesday, March 23 in solidarity with the city’s traveller community, who were set to be disproportionately affected by provisions within the bill also ended in violence, resulted in the police riding horses and setting dogs on protestors staging a peaceful sit-in at the city’s College Green.

The events on Friday March 26 had passed largely without incident. Several hours of good-natured marches around the city centre had ended in equally good-natured and peaceful sit-ins outside the central police station. A soundsystem attracted a large portion of the crowd who swayed and danced to drum and bass as another section sat in front of a line of riot police chanting “kill the bill” and “peaceful protest”.

At just after 10 pm, six hours after the start of the demonstration, the police moved in, violently pushing and batoning peaceful protesters. As batons continued to swing, dogs appeared from a side street, barking and snapping at protestors. Many were bitten. From another street, police horses arrived, riding into the crowd, pushing them back.

chaos as they charge again, an injured protestor is pulled from the crowd limping and screaming in agony pic.twitter.com/LbFedgjwjN

The onslaught was relentless. The violence seemed unstoppable. I watched a man sitting on the floor hit with the edge of a riot shield. Another with a bandage on his head, wrapped in a silver blanket bludgeoned over the head with a baton. People were screaming for medics. There were young protestors crying, blood gushing from head wounds. Several were lying on the floor motionless.

As I walked back to my hotel later that night, through the empty city centre, the adrenaline finally seeped out of my body. My shoulder started to throb where it had been hit by a baton, the full force of the blow being absorbed by the skull of the person who was standing next to me. I stood in the doorway of the Travelodge and sobbed.

The next day, I met up with a couple of friends. We swapped stories of the night before and went to the supermarket to buy flowers and treats for one of their friends who’d spent all night in the hospital following the protest. Their nose had been shattered after a police officer used the edge of their riot shield to ‘chop’ them in the face. They’d been sitting on the floor.

Following the clashes on the 21st March which saw the riot van set on fire, Avon and Somerset police briefed the press that two officers had suffered broken bones and one had suffered a punctured lung. The force later had to retract the claims when they were all found to be false.

New figures from Netpol, the police monitoring group report that at least 62 injuries were inflicted on protestors during three demonstrations in the city between 21 and 26 March. Of those injuries, seven were bitten by police dogs, 20 were hit by batons and 11 by shields. The stats, largely ignored by a media class falling over themselves to report what turned out to be false claims of injury by police forces, provide a much more accurate and disturbing picture of what’s happening on the streets of Britain.

Remember claims of police officers with broken bones and a punctured lung that later mysteriously disappeared? Here's the extent of 62 confirmed injuries recorded – so far – to Bristol #KillTheBill protesters from 21-26 March 2021 https://t.co/Nw2nAafmuA pic.twitter.com/Matj2UwE93

Little over a week later, I was out on the streets of London for another Kill the Bill demonstration. The protest in the city was one of 36 happening in towns and cities across the country. After hours of peaceful marches which had been addressed by various MPs including Jeremy Corbyn and Zarah Sultana, violence erupted as protestors tried to halt traffic outside Parliament. Clashes in front of a lorry saw one protestor pull off a police officer’s hat and throw it across the crowd. Another picked it up. As he did, at least six officers rushed through the crowd to violently tackle him to the ground. Footage later emerged of an officer allegedly kneeling on the protestor’s neck as he was detained for catching the hat, a claim the Met police strenuously deny.

a police hat was thrown from the crowd and another protestor caught it, a group of police violently apprehend the person who caught it. elsewhere someone has been pepper sprayed and is having their eyes flushed. it’s very heated here. pic.twitter.com/b98v9RrG9o

I watched photographers get pepper-sprayed, and protestors bludgeoned with batons. As numbers of protestors dwindled, more and more police officers, tooled up in riot gear entered the junction, eventually pushing demonstrators back up Whitehall before violence then erupted in Trafalgar Square. I watched kids get snatched and bundled by police officers. Others kneeling on the floor were hit over the head by batons. Later on a group would be held in a kettle until late in the night without access to toilets, food or water.

Two legal observers, there to monitor the actions of the police, were arrested, despite an ongoing legal challenge against the met by Liberty following the arrest of observers at a previous demonstration in the city.

it’s carnage here as group after group of riot police launch themselves into protestors. people here on their hands and knees being hit by batons. pic.twitter.com/D1U8Gno72M

The protest in London was the culmination of weeks of demonstrations against the bill which had been kickstarted by the violent shut down of a vigil in memory of Sarah Everard, a young woman who was killed while walking home at night. A serving Metropolitan police officer has been arrested and charged with her murder.

From the streets, it’s clear that the police feel emboldened. That they would attack a vigil for a woman allegedly murdered by one of their own in of itself shows that. The relentless and consistent violence against protestors should act as a warning sign of what’s to come, and prove more than ever that the last thing police forces in this country should be given is more power.

The assault of dozens, if not hundreds of peaceful protesters in cities up and down the country, are not only indicative of a police force drunk on power, but of the determination of the state to push through this regressive and draconian legislation. Legislation that threatens the very heart of our democracy.

As we approach another weekend of action against the bill, the stories from the streets and the figures from Netpol must act as a call to arms. We must do everything we can within our power to stop this bill and to thwart the tyranny of the police. The consequences if we can’t don’t even bear thinking about.

Linkedin
RELATED ARTICLES
OTHER ARTICLES
Thousands attended the annual event this year to wheelie through the city and call for ‘knives down, bikes up’.
The workforce is now gearing up for industrial action after receiving a measly pay rise, reports Ella Glover.
Following the announcement of an 80% hike in the energy price cap from 1st October, crowds gathered outside the offices of energy regulator Ofgem to protest and declare their intention to undertake a payment strike.
Financial turmoil is pushing people who work in the sex industry into more dangerous and desperate situations as a means of survival.
Yesterday thousands gathered outside Buckingham Palace after news of the Queen’s death broke.
As the Scottish government announces a rent freeze, an activist with Living Rent who fought and won shares how they did it, and what must come next.