News & Politics / Opinion / Welcome to Theresa-land: Brexit Britain getting pissed on from a height 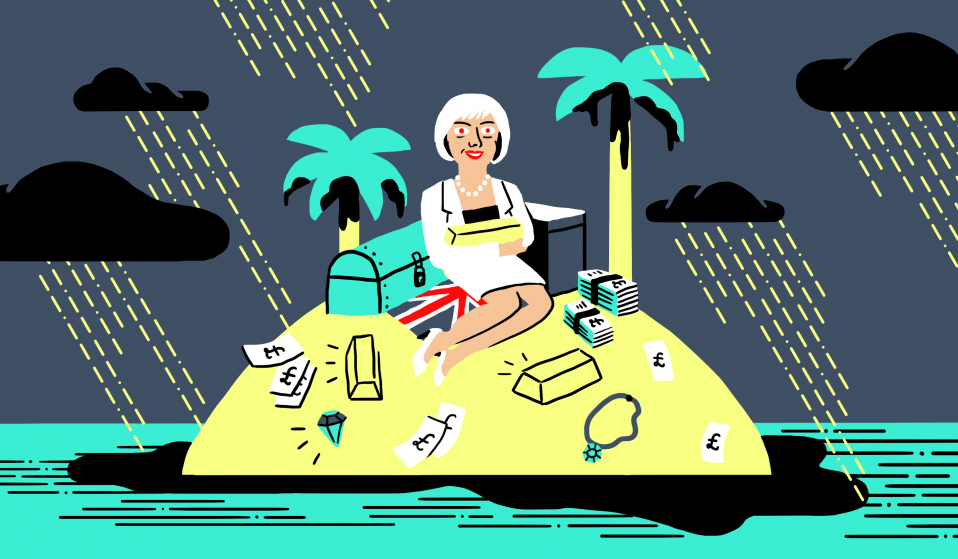 In her long-awaited Brexit speech, many hoped Theresa May would lay out a roadmap for Britain finding its new place in the world. But James Butler argues the only direction we're heading in is towards Theresa-land: a shit, sunless, drizzling Cayman Islands, with Piers Morgan on daytime TV.

Yesterday, Theresa May delivered a long-awaited speech on the UK government’s Brexit Plan. Having had to make do with mystifying soundbites instead of policy until this point – ‘Brexit means Brexit’, and ‘a red, white and blue Brexit’ – both press and politicians alike were eager for a revelation. But this was not a triumph. Looking a little like a hunted and anxious supply teacher, May stumbled her way through a 12-point plan outlining what she wants from Brexit.

In Theresa-land, Britain will be open, but also closed; it will be free of the red tape of the EU, but somehow also still privileged in its access to Europe; it will share in Europe’s prosperity, while free of its troubles; it will have its cake, and eat it too. Gradually, over the course of the speech, it began to dawn that this was less a plan than a comforting fantasy, the kind of thing May must repeat to herself before sleep at night, as the shadows of EU commissioners and frothing UKIP headbangers stalk the walls of the No. 10 bedroom.

After the PM had outlined her comforting confection, we were informed that this speech, with all its vagueness and contradiction, was to be our last update. The government would not be publishing a white paper on Brexit, this 12-point plan was to be our compass and map for the period ahead, until a Brexit deal is to be presented to parliament for its assent. This means we have to look at this speech for hints about the direction of Britain’s negotiating position, and what May thinks she’ll be able to pull off in negotiations with the EU.

Although it was expected, May’s confirmation that Britain will leave the single market – in order to better control migration – indicates that the country is on course for a ‘hard’ and potentially very painful Brexit. May attempted to mollify foreign sentiments by talking up Britains ‘global’ aspirations, and including some history-free guff about British ‘internationalism’, a departure from her more explicitly nationalist conference speech last year. It’s clear that May, like most Conservatives, has an ineradicable nostalgia for the days of British imperial greatness, and this lends to her position an unwarranted arrogance: she talks of any temptation to a punitive approach by the remaining EU states as an ‘act of calamitous self-harm’.

The phrase tempts fate – and is seemingly untroubled by irony – for although it is true that Europe needs, especially, London’s financial centres, the 27 EU states seem better poised to bounce back from any acrimonious split than Britain. Capital, after all, can move. As expected, Joseph Muscat, the Maltese PM, told the European Parliament this morning that any Brexit deal offered to Britain must be inferior to EU membership.

The combination of this nostalgia for British greatness with May’s actual vision of the future is what gives the speech its weird, oscillating, swivel-eyed quality. On the one hand, noble Britain, a titan on the world stage, cutting its own path into a neo-Victorian world of global trade and scientific development; on the other, bargain-basement Britain, a welfare-slashing, banker-chasing North Atlantic tax haven, red carpet rolled out for every torturer and despot to stash his loot – a shit, sunless, drizzling Cayman Islands, but with Piers Morgan on daytime TV.

That’s the world Tory politicians talk about when they refer to striking new trade deals: those who worried about the EU’s fondness for TTIP – a trade agreement weighted heavily in the favour of international corporations – are likely to find any British deal many shades worse, not least in a push by international partners on British wage rates. The impact of threatened competition with the EU on tax, especially, will put already underfunded public services in health and education on a death watch. Theresa May’s Fantasy Island will have a diminishing tax base and wild inequality, a yawning gap between those doing well from Brexit and the rest of us. Trickle down Britain, perhaps? More like pissed on from a great height.

May’s decision to opt for a ‘clean’ Brexit (yet another clarity-free adjective) is in some ways her only choice. She knows that much of the country is reconciled to leaving the EU (whether they voted for or against it) and that the only way to overcome some of the complexities of this process is to slice the Gordian knot – or to threaten it, at least.

The calculation is both foreign and domestic: from a weak position, she hopes her more outlandish threat will effectively act as a force majeure in European negotiations; domestically, she has little choice in terms of party management but to take this route, as the threat from UKIP to pull off the right of her party is more significant than any pull from the Liberal Democrats (remember them?) to Tory pro-Europeanists. She is banking, too, that simplicity beats complexity in electoral ratings, something that the Labour Party’s impenetrable Keir Starmer might remember next time he’s responding to a Brexit speech.

But May cannot achieve enormous political and constitutional change by sheer force of will. There are several crises heading down the pipeline towards her. One is that her implicit suggestion of tilting British international orientation towards the US will not only run into various restrictions imposed by extant US trade deals, but that allying with its new and unpredictable Orange Overlord (who cannot, apparently, remember Mrs May’s first name) looks like brazen stupidity.

Despite her intention to reduce immigration, British unemployment is low, and its economy relies on migrant workers, and the anti-migrant sentiment she has relied on (and done her part in stoking for many years) will prove hard to temper. A flurry of profit warnings in recent days also suggest Britain’s economic doldrums may sharpen: the question for May will be whether she can use Brexit to pull off a domestic variant of disaster capitalism – and whether she can convince her party and the country to consent to it.

For all that May’s dream of Brexit relies on hard borders, there is one border which will prove an intractable problem for her: that with Ireland. The return of a hard border in Northern Ireland would be a major political risk and imperil and already precarious arrangement. The absence of serious consideration of Ireland in UK politics is staggering, but the current hand-waving on the matter will have to encounter brutal reality at some point. Add to this the likelihood of renewed support for Scottish independence in the event of ‘hard’ Brexit, and May’s tenure as PM may also inaugurate the end of the United Kingdom.

Before all that, though, May has to get her ‘Great Repeal Bill’ through parliament: the bill is likely to offer the government extensive power to reform the English legal framework with very little parliamentary scrutiny – despite May’s rhetorical concessions to parliamentary sovereignty, it is likely that much of this work will not be available for debate or amendment. It may well be, therefore, that the Lords cause some significant delay to the bill over the principle of parliamentary sovereignty and suspicion of so-called ‘Henry VIII powers’ – thus perhaps also signing the death warrant for the House of Lords itself.

In any case, with her bunkerish hostility to criticism and interrogation, we can expect May’s autocratic instincts to assert themselves throughout the process, not least in her intention to effectively hold a gun to the head of Parliament in the proposed vote over whatever deal is finally reached.

As one might expect from Britain’s traditionally servile and uncritical media, May has been lauded on the front page of the Daily Mail as a New Thatcher, a ball-breaking Moses leading a Brexodus. Her reception elsewhere on the continent has been less warm: El País derides her ‘extremist Brexit’ as a ‘jump into the void’, Der Spiegel notes her speech was full of impossible demands, suggesting the government is both ‘nasty and reality-blind’. This morning on Radio 4, David Davis, the minister for Brexit, suggested that if Britain could get through World War Two is can get through Brexit. At least he has the tone of catastrophe right.

Linkedin
RELATED ARTICLES
OTHER ARTICLES
A recent High Court ruling against the right to wild camp in Dartmoor National Park sparked the largest land protest in history – and campaigners say their fight is not over yet.
After blocking the Scottish government’s gender recognition reform bill, Westminster is now devising further changes to the law to make it harder for trans people to self-identify.
Following the release of his debut single, Deyaz talks battling addiction, dealing with his struggles through music, and building a budding music career from his living room.
As she gears up for the release of her first book, the 24-year-old climate activist talks standing up to authority and building a more inclusive movement.
The action took place in response to the 200 asylum-seeking children who were placed in hotels run by the Home Office who have gone missing.
AI companies that develop image-generators using copyrighted artwork from the internet are coming under fire from artists who say that it amounts to theft.