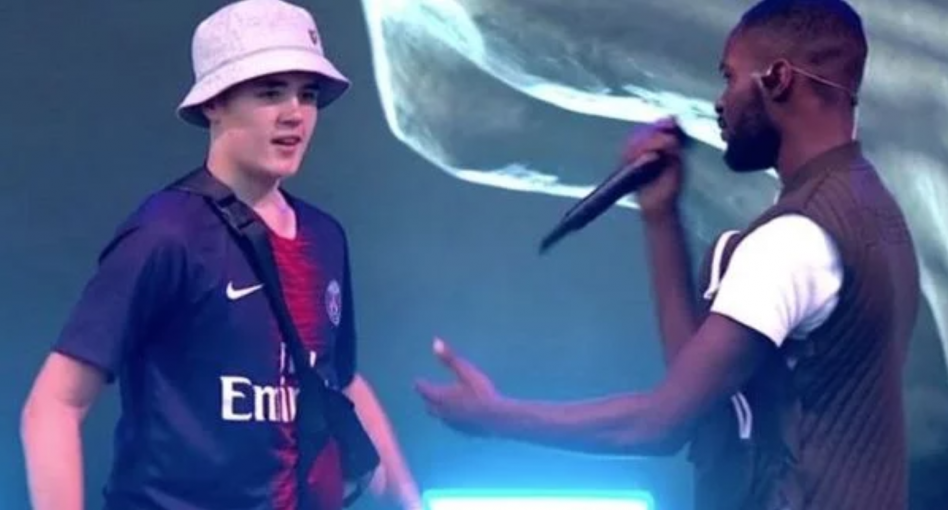 After being plucked from the crowd at Glastonbury to rap alongside Dave, the teen became a national treasure – but would it have happened if he was black?

After being plucked from the crowd at Glastonbury to rap alongside Dave, the teen became a national treasure – but would it have happened if he was black?

On Sunday June 30th, in a place called Glastonbury, a rapper called Dave asked a boy called Alex Mann to join him on stage to rap along to the lyrics of a song called “Thiago Silva”.

None of these things are particularly remarkable in and of themselves. What is remarkable is the response that young Alex got after taking to the stage with one of his idols, rapping the bars originally supplied by West London rapper AJ Tracey. It was euphoric. A true Cinderella moment, where nobody from nowhere suddenly became a hashtag: #Alexfromglasto.

The momentum caused a tsunami of likes, tweets and fire emojis from all corners of the web. Footage of Alex – the archetypal festival reveller complete with bucket hat and board shorts – plucked from obscurity, became a truly iconic internet moment.

Social media lived up to its name and the world quickly found him out. His Twitter followers leapt to 183,200 (and counting). His Instagram to 170,000. A boohooman.com endorsement appeared, seemingly out of nowhere. Celebrity well-wishers offered digital slaps on the back. Blue tick verification; a star is born.

Then, the country woke up to Good Morning Britain.

I’ve been personally invited to guest on GMB on two separate occasions, both of which I declined. I didn’t want to end up dodging controversy grenades in tabloid ‘debates’ designed solely to keep daytime television viewers from switching over. Also, the show is fronted by Piers Morgan.

So it was with much surprise that I swiped open my phone yesterday to see none other than #Alexfromglasto on the GMB sofa, being lauded on the GMB Twitter feed as a ‘hero’ with old Piers listed as a “superfan”. I clicked the link.

It was worse than I could have ever expected. Watching Alex on that sofa, blinking uncertainly, flanked by the faces of middle-aged, middle class, middle Britain, forced to recite AJ Tracey’s bars, acapella, like some kind of quaint novelty act, while Piers did some kind of cringey mock street dancing direct to camera in the cold glare of early morning breakfast television lights. It was both painful and joyless. And somehow, the good people at GMB thought that they were part of the party they had just pulled the plug on.

For everyone watching, it was clear that this wasn’t about celebrating the culture that Alex so obviously adores. A black culture of black heritage that has taken root in a generation of millennials and post-millennials of all heritages: Alex’s generation.

I don’t think it was even about celebrating an underdog-turned hero who, in the words of Piers, “took his chance” and “slayed it”. If it was, then maybe they would have run a piece about how young, black, often independent artists have been taking their chances (and making their own chances) for years, only now able to take their place on main stages. Hold tight Stormzy.

The saddest thing about Alex on the Sofa is also the scariest: that it’s all about the dominant, white mainstream’s inability to relinquish privilege and control. By dragging Alex into the glass tower, away from the people, the mainstream media was basically reminding everyone that it has the right to own any narrative.

And we can’t ignore race here. It was lovely to see AJ Tracey vocalising his support for Alex on a video stream during the GMB interview. It was a reminder of the affection we all felt for the kid when he got the stage all those tweets ago, cupping the face of Dave, telling him “I believe in you”. But I’m instantly reminded of all those occasions when black grime artists are asked to explain whether or not their music is promoting gang violence. It happened to AJ Tracey himself.

I can’t help but wonder what would have happened if 15-year-old Alex was black. Would he – like the 10-year-old Princess K who joined Stormzy on stage at the same festival – have considerably less viral appeal? Would he have been invited on at all? Would he have been treated as an underdog hero of the hour? Would there have been any novelty value in seeing a black kid doing what people expect a black kid to do? Would accusations of promoting violence and criminality have been laying in wait?

Alex looks and sounds like middle England’s quirky grandson or nephew, which allowed otherwise suspicious eyes to embrace, superficially, a culture that has historically been kept at arm’s length. Last week, Stormzy threw down a provocation to the white mainstream, by simply existing as the first black, male British artist to headline Glastonbury’s main stage. It was an uncompromising, honest and courageously unflinching performance. Liberals could back it. Others weren’t sure. Alex’s fairy tale started as a cheer from the crowd and it turned into a sigh of relief, but now? For many? A grimace of frustration.

Jeffrey Boakye is the author of Black, Listed: Black British Culture Explored and Hold Tight: Black Masculinity, Millennials and the Meaning of Grime. Follow him on Twitter.

Linkedin
RELATED ARTICLES
OTHER ARTICLES
While the popular news aggregation service has been kicked off Twitter, its demise does not spell the end of digestible misinformation.
Ahead of the policing bill reaching its final stages in the Lords, protestors came together to rally against the legislation.
With abuse of call-centre staff on the rise, many are now speaking out about the hostility they’ve faced.
The novelist discusses his electrifying debut, which offers a deft examination of masculinity under late capitalism.
From Brooklyn gang members, to Welsh miners and the residents of East Harlem, Bruce Davidson used his camera to shine a light on the most marginalised.
Hundreds gathered together to protest the policing bill by making as much of a racket as possible.