News & Politics / Opinion / What do the Lib Dems actually want? An investigation 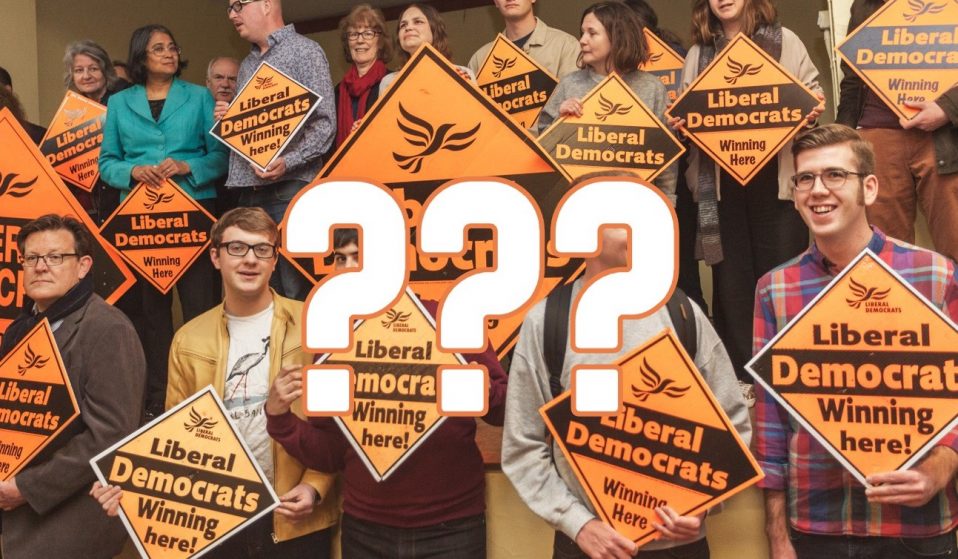 They’re panicked, angry and desperate for relevancy, writes Eleanor Penny. If they don’t get that, they will settle for revenge.

They’re panicked, angry and desperate for relevancy, writes Eleanor Penny. If they don’t get that, they will settle for revenge.

The Liberal Democrats have had an embarrassing start to election season, spreading misleading polls and slippery disinformation about where a ‘tactical vote’ can best be filed to scupper Brexit. In practice, following their advice would usually mean splitting the votes of pro-remain Labour MPs, playing right into the hands of a Conservative party doggedly committed to Brexit.

No one is surprised at the weapons-grade mendacity and arseholery of the Tories. Conservatives are happy to say whatever they need to so they can rake in the cash and sharpen the anti-pleb spikes they’ve installed around their sumptuous country piles. So far, so obvious.

So why, then, would the Liberal Democrats – a party nominally committed to things like liberty and democracy – want to be caught up in the same grubby electoral con jobs? What, in short, do they want?

Firstly: you can’t comfortably call them ‘liberal’ any more. The party has become a retirement zone for ex-Tories uncomfortable with the idea of gouging the poor without the happy bounds of the European Union – and they’ve brought along some distinctly illiberal views them. Philip Lee MP’s questionable voting record on gay rights dovetails nicely with former leader Tim Farron’s swivel-eyed views on gay sex. They could have come out as the party of migrant justice – a space largely neglected by Labour – but that would have meant awkwardly committing to undo the hostile environment policies they ‘went along with’ in the 2010-15 coalition.

There’s also the problem with new leader Jo Swinson, who has been posturing as the Lady Candidate in full lean-in corporate feminist glory. Let’s not forget that she merrily supported – indeed, championed – an austerity settlement which hit women the hardest, plunging them into penury and kicking them out of refuge shelters.

They’re not especially democratic, either. The Liberal Democrats used to be known for a charmingly wonkish focus on parliamentary procedure, voting structure and constitutional design – all deeply important things that got political science students hot under the collar, but, if the failed Voting Reform referendum is anything to go by, failed to inspire much enthusiasm elsewhere. They briefly revived that tradition with their People’s Vote campaign – and then abandoned it as soon as Labour got on board. (Back in the day, Jo Swinson supported an EU referendum, too). Their policy is now a simple revoke article 50 and forget about it, no questions asked. I couldn’t think of a better argument in favour of the Brexit Party line that ‘liberal’ politicians don’t care about their votes.

They’re not too hot on Scottish Independence either. Commitment to the union is a legitimate political opinion, but Swinson’s declaration that the SNP has ‘no mandate for a 2nd indyref’ seems a pretty wild position to take given the amount of time that they, a party with ‘democrat’ in their name, had devoted to fighting for that elusive second EU referendum.

And now we come to Stopping Brexit; the would-be redemption quest for a party given a thorough kicking at the ballot box in 2015 and 2017, the backstop against their long slide into total irrelevance. It is their main policy and the grounds on which they justify a lot of underhanded electioneering. But for a party with such tunnel vision on stopping Brexit, they seem to be turning down a lot of opportunities to, well, stop Brexit.

They repeatedly blocked a government of national unity on the grounds that they, a minority party, should be able to randomly select anyone except a leader of the opposition with many millions more votes than they. To make matters worse, their nomination for interim PM was Ken Clarke – a repeated supporter of both Theresa May and Boris Johnson’s Brexit deals. Misinformation campaigns, allegedly linked to high profile Liberal Democrats, have been targeting remain Labour MPs and narrow marginals where they are most likely to split the Remain vote and deliver a Conservative victory.

They’ve continually ruled out the Labour party as coalition partners – even though their promised ‘soft Brexit vs Remain’ referendum is realistically the best shot at a non-disastrous relationship with the EU trading block. They’ve said they’ll once again shack up with the Tories in another coalition government – playing junior stooge to a government with a singular focus on triumphalist hard Brexit. They are a Tory strategist’s wet dream, and a hard Brexiteer’s secret weapon.

Perhaps the weirdest element of this is the vagueness around why they want to stop Brexit in the first place. There’s a lot of vague hand waving in the direction of things that sound cuddly and progressive; they want to stop Brexit because it would be bad for the economy, social services, the NHS, etc. But if they wanted to protect the NHS they’d presumably have voted against event legislation put forward to shield it from hard Brexit free trade deals. (They didn’t). They wouldn’t have helped the Tories chop it up and sell it for parts. (They did). They’re not stopping Brexit to protect jobs, the economy, education, workers’ rights, corporate regulations, and migrant rights. If they really cared about that stuff, they would have voted for it while they had the power, and defended it in parliament since. And – again and again – they haven’t. They are the cheerleaders of hard-nosed neoliberalism. Their only notable recent contribution has been to snipe at anyone trying to sweep up their mess.

They care far more about stopping Corbyn than they do about stopping Brexit. They’ve not been particularly subtle about it. Because for them, stopping Brexit is a revanchist identitarian project for investment bankers and post-Blairite technocrats attempting to reset the political clock to the last time their world view was relevant; when they were not yet forced to confront the results of their multiple policy failures. Brexit represents a crisis point where the centre lost control. The mainstream Remain campaign pushed a narrative of positive globalisation and continued prosperity, and a lot of people didn’t listen to them. They are now outraged that so-called ‘populists’ are beating out centrists in the polls, but have no explanation beyond the fundamental gullibility of everyone else but them. They have no honest account of their own role in a slow collapse of popular consensus for neoliberalism, and how hard-right xenophobia and imperial nostalgia was used to plug the gap. They seem to have no policy solutions to fix the multiple overlapping crises underlying Brexit, which would not fundamentally challenge both their voting records, and their basic belief that the hard work of realpolitik should be handed over to market logic, whilst nudge theorists in nice suits tidy around the edges with the odd plastic bag tax here and there.

Boris Johnson’s toff windbaggery offends their sense of whiggish politesse – but his commitment to defending the market in some form makes him far less scary than a political project committed to a real challenge to corporate forces, to a different vision of what politics is, what politics should be. This is why they’ve prioritised sabotaging Labour over actually stopping Brexit. It’s why their platform is so devoid of any commitment to fixing the issues which were already tearing the country apart long before the shock of June 23rd, 2016. Panicked, desperate and angry that their world is over, all they want is relevancy. If not, they will settle for revenge.

Linkedin
RELATED ARTICLES
OTHER ARTICLES
Photographer David Hoffman recalls documenting the extreme wealth inequality around Tower Hamlets and Hackney int the 1980s.
The last few years have seen an increase in LGBTQ-led initiatives to feed the hungry, with many finding ways to stay afloat despite the challenges.
Photographer Matthew Brookes recalls following a group of young people in Venice Beach living in search of the perfect wave.
A new edition of a seminal book brings together iconic images of the band onstage in their full glory and backstage in moments of unguarded camaraderie.
50 years since its inception, and the campaign calling for recognition that capitalism depends on domestic labour is as pertinent as ever.
In the latest instalment of Photographers in Conversation, the chronicler of raves, protests and beyond explains why he’s drawn to such specifically visceral environments.