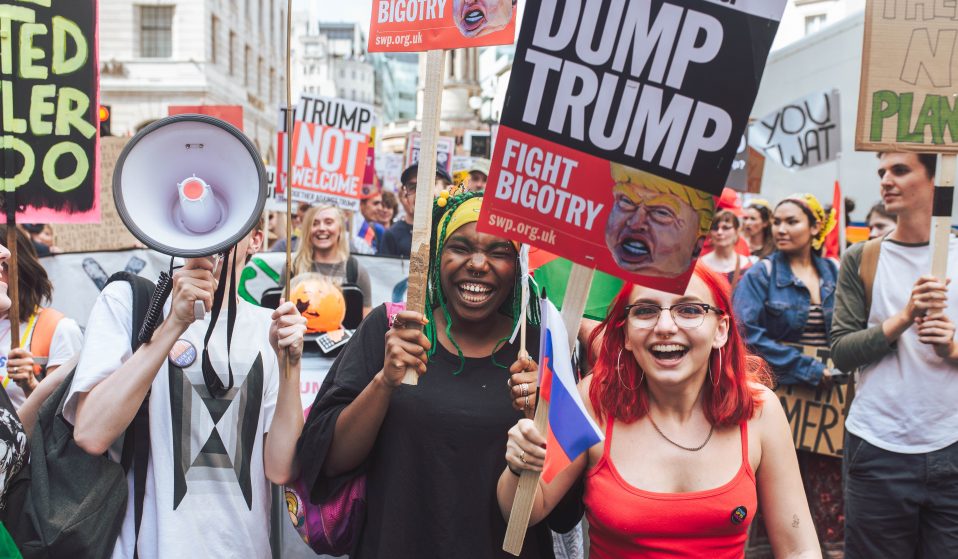 Today's midterms will be the first time Trump’s administration has faced the electorate. But even if we don’t get the result we need, it’s not the end.

Today's midterms will be the first time Trump’s administration has faced the electorate. But even if we don’t get the result we need, it’s not the end.

Given the bleak demagoguery of Trump’s 2016 victory, it was difficult to see a light in US politics. But among all the hate and division, something new emerged from the darkness.

In 2016, during the Democratic Primary, nearly three-quarters of Senator Sanders’ donations were under $200, with the average being just $27. Seemingly out of nowhere, a 75-year-old man had burst onto the scene with a people-led, grassroots, radical socialist movement. With all the talk of the rise of the right, we neglected to see how America – the land of wealth, materialism and individualism – actually began to contemplate socialism.

Of course, the industrial mechanics of a performative democracy quickly snuffed out Sander’s path to power. But the first domino had already been toppled. People realised, collectively, that they could match the dominance of corporate America. Crowdfunded campaigns could challenge the mainstream. The secret was out.

In the summer of 2018, under the cover of Trump‘s firewall administration, the second domino fell. On June 26, 28-year-old Independent Alexandria Ocasio-Cortez received 57.13 per cent of the vote to Joe Crowley’s 42.5 per cent, defeating the 10-term incumbent by almost 15 percentage points. Time magazine called her victory “the biggest upset of the 2018 elections so far.”

Oscasio-Cortez’s average donation was just $22, and she had been outspent by the Democrat establishment by 18 to one. Her campaign demonstrated how a collective movement is able to challenge the established monopolies of power, without compromising on a single issue. Ocasio-Cortez ran on an unapologetic platform of free health care, gun control and housing as a human right – principles the Democrats had sold off years ago. She obtained power in a way that made her accountable to her community, not her donors. She could exercise her power using the same beliefs she ran on.

Then there’s Rashid Tlaib, a single mother of two from Michigan, who is set to be the first ever Muslim women in Congress. Tlaib raised almost a $1,000,000 in her primary campaign, more than her five opponents combined – an amount that was raised from 62,000 individual supporters. Tlaib openly champions a $15 minimum wage, free healthcare, and opposes military intervention. When a community comes together to fight for change, it allows a diverse group of people and ideas to flood into US politics. Suddenly, nepotism is replaced with radicalism. Well-funded grey suits are no longer your inevitable representative. Instead, everyday working citizens can represent their own interests.

America’s political system has a depressingly deep relationship with the corporate world. Barack Obama’s re-election in 2012 cost the Democrat Party $800m, more than every Democrat presidential campaign between 1960 and 2000 combined. The Democrats, the supposed party of the working class, were now outspending the Republicans, the party of the elite. But business only believes in profit – and when the Democrats are forced to choose between power or principles, the winner is inevitable. As a result, over the last 20 years, corporate interests have developed such control that political leaders are now only capable of offering cosmetic solutions to problems.

The shift of power from the super-rich to small donations from ordinary people marks a major change in how modern democracy works. And, even better, it’s not just limited to the US. In 2017, the Labour Party in the UK raised more (£55.8m) than the Conservative Party (£45.9m) in an election year for the first time in history, with an average donation of £22. In fact, figures released by the Electoral Commision show the Conservative Party in the UK now receive more donations from the dead than it does from the living– a fact so good it makes opinion obsolete.

And in Brazil, jailed socialist candidate Lula da Silva – a man who has literally been imprisoned for his beliefs – reportedly raised $72,000 in 10 days. Despite an ominous cloud hanging over the country with the recent election of Jair Bolsonaro, he is still given the power to spread a message of hope through crowdfunding. This collective action is a new model for challenging the rise in rich, slick, fascists who run campaigns of fear. In a world of low voter turnout, it gives people a stake in politics and directly engages them. Crowdfunding is what democracy was supposed to be before they sold it.

Today’s midterms will be the first time Trump’s administration has faced the electorate. Even if we don’t get the result we need, it is not the end. Plenty of options are available for you to counter the rise of fascism.

If you want to know more, visit HONGKIAT to find a run-down of the 10 best, safest and free crowdfunding sites to use.

Linkedin
RELATED ARTICLES
OTHER ARTICLES
The musician, DJ and founder of Monika Enterprise reflects on a career defined by revolution and rule-breaking.
In Sheffield, food delivery drivers are fighting back against one of the giants of the gig economy.
From Brooklyn gang members, to Welsh miners and the residents of East Harlem, Bruce Davidson used his camera to shine a light on the most marginalised.
Leading art critic Robert Storr reflects on the photographers – from Seydou Keïta, to Malick Sidibé, to Carrie Mae Weems – who helped to transform and redefine the medium.
From the queues outside to the last ones standing, Francesco Mellina’s new photo book follows a night that has gone down in the Northern-Soul history books.
In the UK, Hongkongers are continuing to stand in solidarity with the pro-democracy movement.