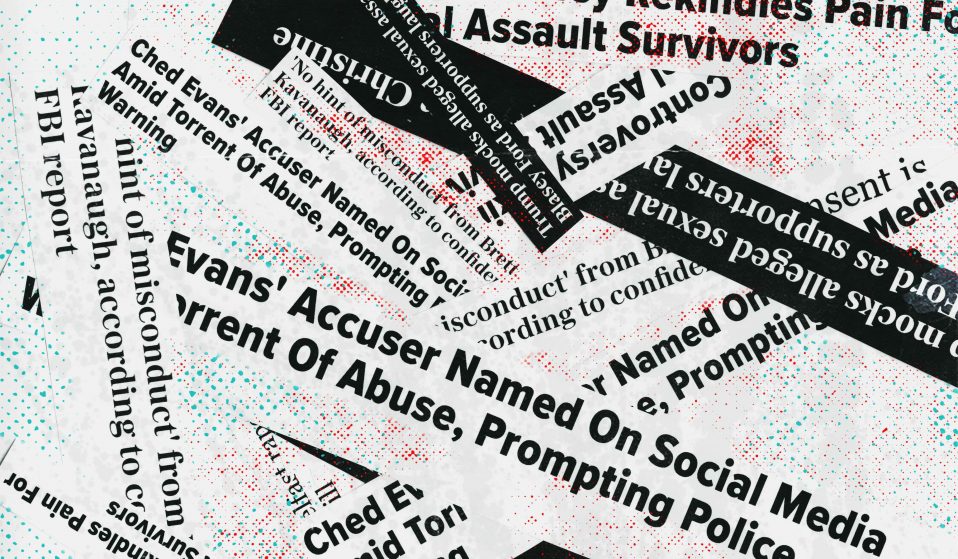 From the Brett Kavanaugh scandal to the Belfast rugby trial: the routine disbelief aimed at women is shocking, writes Megan Nolan. It shows what society really thinks of us.

From the Brett Kavanaugh scandal to the Belfast rugby trial: the routine disbelief aimed at women is shocking, writes Megan Nolan. It shows what society really thinks of us.

The last few weeks have been particularly traumatising for many of us who’ve experienced rape and sexual assault. We are in an era when those acts of violence are edging ever further into daily discourse, and this has been difficult to live with. The change can be viewed positively in many ways, with relief that what was once unspoken and shrouded in shame is coming out of the woodwork. But equally, to hear people speak on these matters casually and with cruelty and malic – or even just with careless ignorance – is painful.

In September, President Trump commented on Dr Christina Blasey-Ford’s accusations against Brett Kavanaugh, tweeting that;  “I have no doubt that, if the attack on Dr Ford was as bad as she says, charges would have been immediately filed with local Law Enforcement Authorities by either her or her loving parents.”

This was a prime example of how alienating, how maddening, it is to be a survivor of sexual violence in this society, to feel that you live in an entirely different world than those who are speaking about you. In response, a hashtag on Twitter, #WhyIDidntReport began trending internationally, with victims stating their varied and often horrific reasons for not doing so.

I read many years ago about a memorably disturbing serial kidnapper and rapist in New Mexico named David Parker Ray. It was a phase I was going through after having been raped myself – tracking down and compulsively reading all manner of quite incredible assaults on women. It was some kind of coping mechanism, to submerge myself in detailed accounts of horrors undeniably much worse than my own. What struck me about this one, though, what I have never forgotten, is that two of his accusers told police and family what had been done to them and were not believed. The reason, I think, that it never left me is that their experiences were the most extreme, Hollywood-gore versions of rape possible. There was no grey area, no intoxication, no question of revoked consent. They were reportedly bound and tortured and severely injured. And still, they were not believed. One woman’s husband believed that she was cheating on him, and lied about being attacked to deflect it.

What does this extraordinary story have to do with the more mundane and commonplace sexual violence which most victims suffer? Firstly, it indicates that, despite what habitual disbelievers of women say, even the most black-and-white incidences of rape, replete with physical injury, will not necessarily be believed. And secondly, the case illustrates something chilling and crucial to understanding why women don’t report. Parker Ray deliberately chose sex workers and women with substance abuse issues, because he knew that their standing provided him with an increased chance of plausible deniability.

I’ve thought about those words – plausible deniability – many times in recent years, reflecting on my own experience. Part of why I did not tell anybody at all after I was raped was that the circumstances seemed – to me back then at least – foggy. I was drunk, and asleep in a bed at a party. At the time I used these facts to blame myself for what took place, but now I know that predators consciously seek out vulnerable women to attack. They know that the circumstances, both of the event and the woman’s life, will drastically reduce her chances of being believed. Why didn’t I report? Because the man who attacked me created conditions for his act which ensured I wouldn’t.

For those brave women who do report, the outcomes are so pathetically negligible that it’s no wonder others don’t follow suit. In the UK, on average 5.7 per cent of reported rape cases end in a conviction. The trial process is notoriously gruelling for the victim, with behaviour, lifestyle and clothing choices all up for scrutiny.

Earlier this year we had the harrowing ordeal of the Belfast rugby trial, during which the alleged victim had her blood-stained underwear examined in court and queried. Solicitor Brendan Kelly put it to her that she had been bleeding before the sexual encounter, which she firmly denied: “That is completely incorrect,” she replied, and added that a doctor who examined her confirmed she suffered an internal tear during the alleged rape.

The latest outrage of the Kavanaugh hearing has transfixed us again. Can this be reality, that the result of disclosing an alleged assault is being mocked publicly by the President of the United States? It’s a wonder that anyone does report, given these circumstances, not that more don’t.

Given the astronomically high numbers of women who informally report having suffered rape and assault, it’s time to stop perceiving it exclusively as a dramatic exceptional event which couldn’t possibly go without police involvement. The routine disbelief aimed at women who aren’t perfect victims – sober, injured, straight to the police – begs the question; why do you think that this many women would invent this experience? To do so, you would need to regard womankind on the whole as utterly beyond reason, totally inscrutable, inhuman essentially. It is sadly evident of late just how many men still do.

Linkedin
RELATED ARTICLES
OTHER ARTICLES
A new project is documenting formerly incarcerated people as they transition back into civilian life.
Ahead of the release of their first collaborative album, the producer and rapper talk psychedelics and the state of UK hip hop.
The idea that a younger generation is abandoning work has become a popular narrative online, but it doesn’t necessarily reflect reality.
Thousands attended the annual event this year to wheelie through the city and call for ‘knives down, bikes up’.
With skyrocketing rents, packed out viewings, bidding wars and more, renting in London has never been harder.
Yesterday thousands gathered outside Buckingham Palace after news of the Queen’s death broke.