News & Politics / Opinion / Without unions, we have no hope 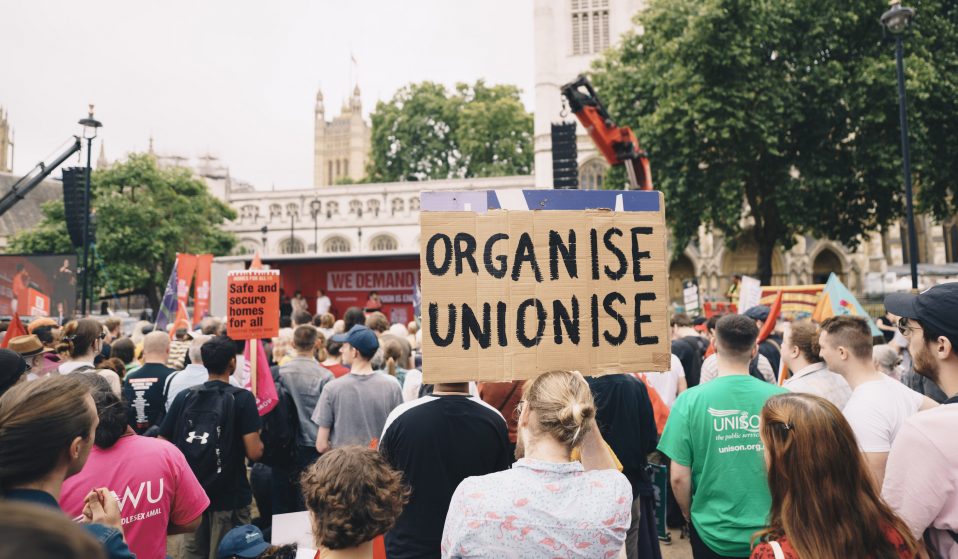 Whether it's partygate, the climate crisis or the spiralling cost of living, the fightback begins on the picket lines writes Tommy Vickerstaff

Whether it's partygate, the climate crisis or the spiralling cost of living, the fightback begins on the picket lines writes Tommy Vickerstaff

The rage I felt as the partygate scandal broke and we found out that the government was setting rules for us that they weren’t sticking to still permeates my daily thoughts.  During the lockdown people had to sit at home knowing that family members would die holding the hand of a stranger instead of a loved one, people were deprived of places to grieve, of physical contact.

Of course, we did this willingly. We did this with care. Because we were trying to protect everyone. I would gladly do the same again. But to know the Tories had been laughing at us behind closed doors with wine and cheese swilling about in their mouths makes my blood boil and sent millions of us across the country into grief stricken despair and fury. Their lack of care for the masses, their refusal to take the action necessary, the prioritisation of their own futile interests. And right now, the same is happening again.

Bank of England governor, Andrew Bailey, on an almost £600,000 a year salary, has unashamedly told workers to expect a real terms pay cut to protect the economy. The UK has a record rich list, with more billionaires than ever, whilst 40% of people are facing poverty this Autumn. Ordinary people are expected to make sacrifices whilst the wealthiest are hoarding more money than ever.

Sometimes it feels like there is a real apathy from the UK public when it comes to the economy. A sort of acceptance that washes over people because we’re told that it’s fixed. It’s just the way it is. But the reality is the economy is designed and the problems we’re facing have been engineered by the people in power. They want us to believe that there’s no way wages can go up at the moment because of inflation. However, the uncomfortable truth is that since the pandemic the main driver of inflation hasn’t been wages – it’s been profit.  Wages could be increased in line with inflation without causing damage to the economy if money was taken off the top profits. To not do that is a political choice and one that condemns people to struggle to survive, and many to death.

With energy bills, we’re told that the issue is the global oil and gas market. But then why is that only hitting consumers? The largest oil and gas producers made close to $100bn in first quarter of 2022. The bosses of UK oil and gas extraction are getting pay rises whilst the workers wages and jobs are slashed and bills aren’t going down. The fuel cap rise is expected to rise by another £800 per household in Autumn, after 2.5 million families were already pushed into fuel poverty by the last one. Meanwhile the UK government is still failing to tax energy company profits at the global average. What’s more, they’re offering tax breaks on new oil and gas development in the UK on projects that have no scope for bringing down household energy bills in the short term and plunge us deeper into climate breakdown in the long term.

If you’re pissed off about partygate, fuel prices or energy bills, a key way to take action and fight back is to support the RMT strikes.

What do striking railway workers have to do with parties, fuel prices and energy bills? Everything. The collective power of people organising through a union has given us many rights we take for granted. Unions won us two day weekends, maternity and paternity leave, health and safety in the workplace to name just a few. These things now seem like the bare minimum. They are common sense, baseline rights. So too should wages rising in line with inflation be. Especially in the middle of a cost of living crisis.

“It is a union with a head in the sand attitude that has foolishly let its members into this dispute.”@WilliamJHague says that if, like the RMT, everybody tried to get a pay rise in line with inflation then “inflation would become deep seated in the economy.” pic.twitter.com/zo2LiWCB9z

Unions are being painted as the villains by politicians and the media because they don’t want the general public to remember our power. Former chancellor Ken Clarke already said that the rail strike cannot be allowed to appear successful or else “a wave of walkouts will follow, with workers in multiple sectors demanding pay rises.”

The biggest trick of politicians and the media is making the UK public believe that quick bursts of disruptive action have more of an impact on our day to day lives than the damage their policies cause. That unions striking or activist groups campaigning and causing minimal disruption over days and weeks is somehow worse than the disruption and destruction the Tories have wreaked on society during their 12 years in government. They do this because they know that when we work together, we win.

We saw the power of organising during lockdown. Over 3 million people joined an estimated 4000 mutual aid groups to provide support to people during the pandemic. 4 in 10 of those groups have remained active, supporting families through school meals being slashed last summer and now in the cost of living crisis. Anti raids groups continue to disrupt immigration raids and protect people from the sharpest edge of the Hostile Environment.

In falling for the Government’s trick, forgetting the wider movements, and how they’re all interlinked, we forget our collective power. Right now the working classes are once again being battered by the state. The truth is union organising and community resistance has always been, and will always be, one of our most effective weapons in that fight. We have to remember that disruption isn’t the enemy – it is our power. With refuse workers, teachers and airline staff all threatening strike action over the summer, momentum is building. Not only is it our duty to stand alongside them, it is our only route out of the horrors that await us in the coming winter.

When we stand together and fight together, we win together, and that all starts alongside the RMT.

Linkedin
RELATED ARTICLES
OTHER ARTICLES
From the chip shops, to the bingo parlors and burlesque dancers, photographer Mike Coles remembers capturing scenes of holidaymakers by the English coast.
Steel City is often overlooked when it comes to the country's cultural radar despite its role in shaping electronic music.
With the UK now set to run out of vaccines, people working in the sex industry – particularly outside of major cities – have been left especially vulnerable, reports Brit Dawson.
Following the release of his latest album, the rapper talks about finding a new approach to songwriting, attitudes to poverty, and why his music is more than a political statement.
Last week, Tower Hamlets council removed its nudity-restricting licensing conditions in a huge win for London’s kink community.
Photographer Bud Glick recounts documenting everyday life in the area, and what it taught him about the Chinese immigrant experience.