News & Politics / Opinion / XR reflects: what we learned from the Autumn Uprising 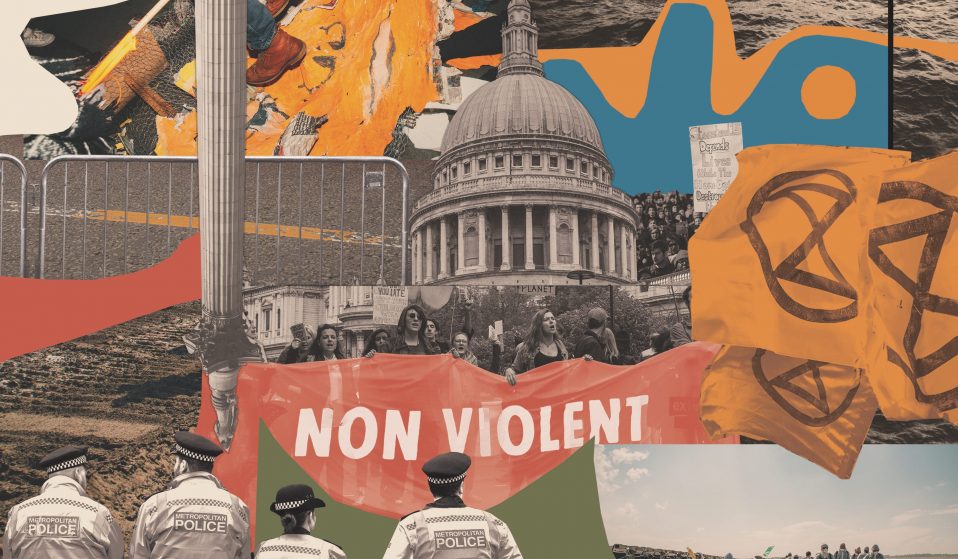 The last disruption was described as the ‘difficult second album’, with unlawful bans, violence and misguided targeting. So what lessons can be taken forward?

The last disruption was described as the ‘difficult second album’, with unlawful bans, violence and misguided targeting. So what lessons can be taken forward?

In April 2019, Extinction Rebellion became a household name with the first International Rebellion. The core XR strategy – of prolonged disruptive yet peaceful action, leading to mass arrests and economic pressure on the state while encouraging more people to join – seemed to be working. Membership exploded, climate emergencies were declared, and net-zero carbon dates set.

XR UK aimed to repeat this in October, on a grander scale: surrounding Westminster with multiple blockades and shutting down the government. As Brexit loomed and the government wobbled, many autonomous XR groups, such as ourselves, preferred to focus on corporations driving the climate and ecological crisis. What emerged was a hybrid strategy, where disruptive blockade sites would act as bases for large ‘satellite actions’.

Despite preemptive arrest and police confiscating XR infrastructure, including accessibility equipment, the majority of the 11 planned sites were able to set up blockades on the morning of October 7. Some held for several days, others fell quickly, with rebels eventually converging at a peaceful camp in Vauxhall Pleasure Gardens.

After actions targeting City Airport, the BBC and the Government Oil and Gas conference, the second week of the Rebellion began with a large action targeting the financial district. After disappointing media coverage, it was the Metropolitan Police that inadvertently gifted the movement with a repressive injunction that would finally bring the Rebellion to the forefront of the news agenda while rallying huge public support: a Section 14 order banning the gathering of two or more people associated with Extinction Rebellion.

With this repression of the right to protest, alongside arrests of disabled activists demanding their equipment back at New Scotland Yard, the core XR strategy of bringing more people to the cause by showing vulnerability and nonviolent resistance in the face of state oppression at last seemed to be working. Large crowds defied the order, and Section 14 was challenged in court, with the Mayor of London distancing himself from the Met’s decision (it has since been ruled unlawful by the high court). Whatever politicians, commentators and the wider public think of XR’s methods, this unprecedented and unlawful police attempt to shut down peaceful protest meant that wider sympathy was now squarely with XR.

But then a small group of XR activists carried out an action that is being broadly considered an own-goal for the movement’s long-term success: the blocking of Tube and DLR trains at Canning Town and Shadwell. If a core tactic is to make headlines, this was arguably a success: scenes of enraged commuters pulling protestors off the top of a Tube train – with one kicking out in defence – immediately went viral.

The momentum of support in the face of Section 14 was immediately stopped dead. The long-term external and internal critiques of central XR UK’s approach to issues of class, race, and justice were brought to the fore. Rightfully, big questions began to be asked once more.

So, in moving on from a Rebellion that an XR UK statement glibly described as a ‘difficult second album’, what lessons can be taken forward?

There are several positives; this International Rebellion was truly international, with large disruptive actions taken in dozens of countries. London’s Rebellion was genuinely decentralised, with each blockade orchestrated by local and regional groups. The experience gained in this process means that the grassroots of XR in this country are now more empowered and more confident to take action in their own way, and to question the strategy and messaging of the co-founders and central coordinators.

As a national group that has a different government, media, legal system and political, social and environmental landscape, XR Scotland has always done things its own way. But now more regional and local groups are putting pressure on XR UK to change. The increasing prominence of XR Youth, and newer initiatives such as the Global Justice Rebellion and XR Liberation, building on the longer-term work of XR Internationalist Solidarity Network, means that other voices calling for change are starting to be listened to.

These voices are calling on XR UK to adjust its attitude to the police, and to centre justice and solidarity. We also need to continue wide conversations within the movement about strategy: to not be beholden to a rigid and reductive framework formulated by a handful of people on the basis of questionable research.

Climate justice, rather than the generic, falsely depoliticised ‘act now’ message, is at the heart of why many of us are part of XR, and that needs to be reflected in our messaging, our demands and our actions. We need to centre the voices of those that are most impacted by this global crisis. The only way to do that without tokenism or speaking for those communities is to replace much of the current privileged leadership with a system where people of marginalised identities are appropriately platformed.

But we also need to hold on to the values of XR that have made it successful in building a large international organisation of committed activists in a very short amount of time: the regenerative culture of collective care, the efforts to face up to conflict with mutual compassion rather than individualised blaming and shaming, and a deeply-held principle of nonviolence. None of this is easy, but, as Wretched of the Earth wrote in their brilliant open letter to XR, “the fight for climate justice is the fight of our lives, and we need to do it right”.

Linkedin
RELATED ARTICLES
OTHER ARTICLES
Photographer Arthur Grace recalls travelling through the Soviet Bloc and finding ways to evade the surveillance of his work.
Curator Antoine de Beaupré discusses his immense record collection and what it tells us about the intersection of music, photography, art, and commerce.
Thomas Hoepker‘s images taken during a road trip across America provide a searing social commentary about a divided country.
50 years since its inception, and the campaign calling for recognition that capitalism depends on domestic labour is as pertinent as ever.
Photographer Matthew Brookes recalls following a group of young people in Venice Beach living in search of the perfect wave.
For decades, an area of East London has served as a community hub for Vietnamese people looking for a taste of home.