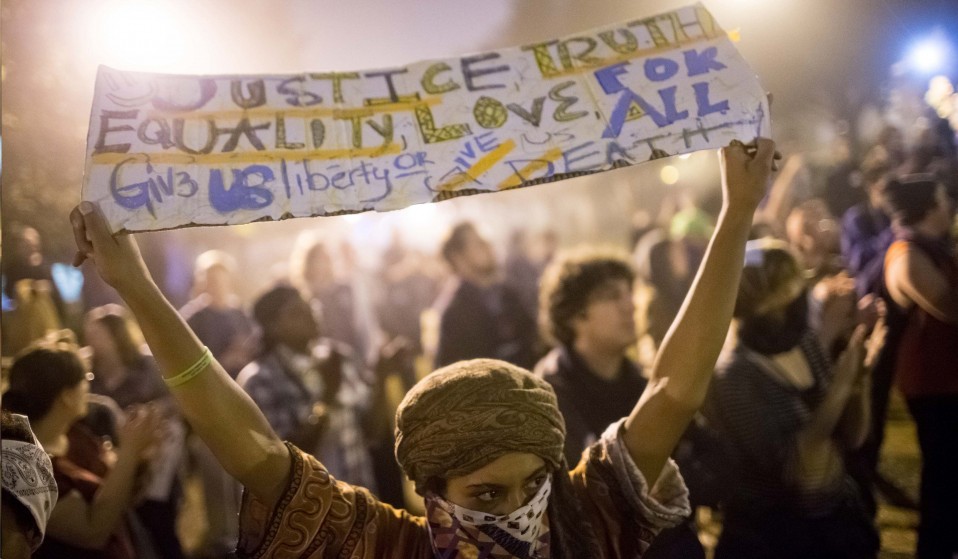 The widespread furore incited against Lola Olufemi after a national newspaper’s deliberately misleading cover story about her work on a decolonised university curriculum; L’Oreal’s decision to fire Munroe Bergdorf from its diversity campaign for suggesting that all white people are complicit in white supremacy; just a matter of days ago, yet another high-profile blackface incident, this time targeted at Britain’s First Black Woman MP, Diane Abbott.

Incidents like these aren’t simply battles in the ever advancing cause of racial equality: resistance to be expected as the moral arc of the universe travels forward. They act as vital temperature checks that allow us to judge what sits in the country’s consciousness. They show us how far we, as a collective, believe in the attainability of racial justice, and how far these ideas have penetrated into a wider public discourse. Each of these incidents has taught us its own lesson about what the public believes to be the state of race relations in the United kingdom.

If 2017 has taught me anything, it’s that the conversation is never quite as far ahead as we might like to think. So much of the progress we thought we had made now feels like a hologram. It can be rolled back. Discourse does not trickle down. Progress fails when it fails to recognise the privilege and resources so often poured into it. It assumes a shared collective experience of knowledge across the nation that simply does not exist. The avant-garde is scattered, the battle lines are unevenly drawn, there is no shared checkpoint.

If you want proof that the functional base of shared knowledge is so much narrower than often imagined then just look to Charlottesville. In the days following the Charlottesville “Unite the Right” rally (read neo-Nazi jamboree), Google saw an overwhelming spike in searches for terms such as: “what is neo-nazism” and “what is white supremacy.”

One of the key functions of the Ivory tower is that it so often excludes by presumption. It presumes that those without similar access to knowledge – without similar opportunities and priorities – can necessarily reach its conclusions. It’s prescribed ‘truths’.

The sometimes fierce and sometimes casual conversations that left-wing intelligentsia have about Baldwin and “bell hooks” are not happening at every dinner table around the country. But our narratives similarly fail to take ahold when they don’t take into account the wasted energy and diverted resources required from fighting racism into simultaneously preserving the innocence of whiteness and pussyfooting to placate ‘good white people’.

Just look back over the last twelve months. In September, Munroe Berdorf was dropped from L’Oreal’s ‘Diversity’ Campaign for suggesting that all white people were complicit in racism and white supremacy. She continues to face an overwhelming amount of abuse for voicing those opinions.

Back then I argued what I still believe to be true: that her firing was unjust, her arguments sound and relatively uncontroversial, that all people internalise and propagate white supremacist ideals unless they actively work to dismantle them. That the system is based upon the silent complicity of ‘good whiteness.’

TV anchors and media outlets, liberal and conservative alike, repeatedly characterised a relatively settled point of racial theory as a violent polemic. ‘Good white people’ all around Britain revealed either through their silence, or tutting condemnation once again, that their allyship was contingent upon being made to feel good about their allyship. That the thankless work of striving for racial justice must in their case, provide just that, thanks. The debacle revealed to us the refusal of ‘good white people’ to back her, unless the language of her struggle exonerated them and reified their ‘goodness.’

The conversation has boiled my blood with its inanity and disingenuousness. Black people like her and I haven’t been called ‘The N word’, or called “N*****’, we have been called NIGGER, plain and simple. The prioritisation of the comfort of white ears, this gross sensitivity – a childlike unwillingness to reckon with the violence of slurs –  does nothing to dismantle white supremacy.

The bizarrely pervasive notion that the innocence of white onlookers matters more than naming the violence we face, in all of its nastiness, is facile. It’s another way in which ‘good white people’ are shielded from confronting racism the way people of colour are forced to: raw, head on, violent and uncensored.

The media furore incited by much of the national press against the women’s officer at Cambridge University Students’ Union Lola Olufemi was another episode that revealed a fear underlying the conversation about race in Britain: the fear of a curriculum of colour.

It revealed that intelligent, good white people believe that history and taste and academic thought are indeed untouchable neutral things developed in a vacuum, untainted by racism and colonialism. That they necessarily believe the best of this taste and thought is already being covered by predominantly white canon, and much like when black students fail disproportionately to get offers from Oxford and Cambridge, or to progress inside the academy, that this is a failure of their own merit.

Furthermore the implicit assumption underlying this is that any attempts to diversify what counts as ‘good’ scholars, thinkers, theorists or writers are irrevocable acts of deference to a minority who are simply not good enough – a continually erased minority, the honouring of whose history and work is not as important as maintaining the comfortable status quo the curriculum upholds and continues to champion as the golden standard and age of discourse.

These things seem obvious to me. That black and brown academics are just as brilliant and worthy of discussion and celebration; that we all internalise and propagate racist ideologies, but some of us possess the power to do so with a far greater impact and a tangible benefit. That people of colour should be free to reclaim historical slurs against them without being policed. That blackface in the year of our Lord 2017 is a chapter of our history so settled in its vulgarity and mean spiritedness that we need not repeat the lesson every few months.

But as frustrating as it is, I’ve realised that there are no simple truths. Even in a Trumpian, Post-Charlottesville world, ‘good white people’ view white supremacy as a boogie man – outlier cases not demonstrative of or reliant upon their complicity in white supremacist structures. They accept the necessary corollary of these beliefs, that higher incidences of violent encounters with police, more dead black children, lower median incomes vs white families, lower acceptance rates into prestigious universities etc, to be functions of the willingness, ability, merits (or the supposed lack thereof) of people of colour, rather than something intrinsic to the way that whiteness –  and even ‘good’ whiteness – creates an oppressed underclass.

If 2017 has taught me anything it’s that the dismantling of racism requires that ‘good white people’ reckon with the benefits, wanted or unwanted, that white supremacy affords them, and that a failure to locate its accountability in their goodness, continues to afford them. The individual innocence of ‘good white people’ will not rectify the disenfranchisement of people of colour, until the unparsable damage that whiteness and white supremacy does as a class is no more.

It is not a situation without hope. In 2017 each and every one of these incidents, though necessitating exhausting, thankless work, provided us opportunities to move the needle a little in the right direction. In 2018, as the conversation continues further incidents are no doubt inevitable – but with them comes the opportunity perhaps to bend the arc of racial progress towards something that looks a little more like justice.

Linkedin
RELATED ARTICLES
OTHER ARTICLES
After blocking the Scottish government’s gender recognition reform bill, Westminster is now devising further changes to the law to make it harder for trans people to self-identify.
A new podcast is opening up the conversation between trans women and trans amorous men in the hope of building coalitions.
Tristan O’Neill’s shots of dancers caught in moments of reverie at the height of rave’s golden age are a testament to the UK’s legendary club culture.
The action took place in response to the 200 asylum-seeking children who were placed in hotels run by the Home Office who have gone missing.
A recent High Court ruling against the right to wild camp in Dartmoor National Park sparked the largest land protest in history – and campaigners say their fight is not over yet.
Following the release of his debut single, Deyaz talks battling addiction, dealing with his struggles through music, and building a budding music career from his living room.