News & Politics / Opinion / Young people have proven we aren’t apathetic, now let us speak for ourselves 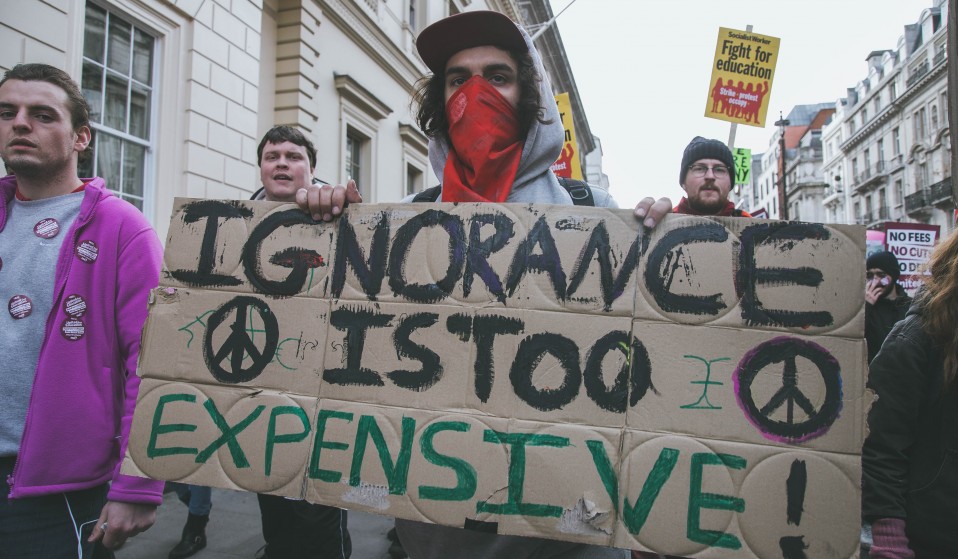 Young people have been ignored, spoken over and sidelined by the British media for far too long, after last week's general election that needs to change.

Young people have been ignored, spoken over and sidelined by the British media for far too long, after last week's general election that needs to change.

When the exit polls came in last week after the UK’s general election, Labour’s unpredicted resurgence reinvigorated British politics in a way unseen in most of our lifetimes. Finally, it seemed, the British electorate decided it deserved more, something better, an end to the nonsensical consensus that appealing to an ever shrinking core vote with a set of centrist policies is the only way to bring about change.

But in the aftermath we’ve unsurprisingly seen parts of the right-of-centre commentariat dismiss the Labour resurgence as a result of rampant ignorance, propped up by young people who don’t understand and should know better or quickly learn. Others have eaten their books or hats live on television, some have accepted their perceptions of young people were wrong from the offset, and now is the time for some reflection and to learn.

While it’s all well and good for those established figures to reassess their positions and opinions though, now must also be a time in which the media starts to change. It’s time that young people are given their share of space on mainstream channels and outlets, not simply looked at as if creatures from another planet in the deepest depths of outer space.

As the night unfolded rumours about youth turnout spread thick and fast, reporters picked up and published figures that suggested young voters had come out in unprecedented numbers, the figure of 72% was thrown about online. Last night YouGov – the polling agency who predicted the general election result pretty closely – suggested that 18-24 year olds voted at a level of 58%.

Either way there’s set to be another election in the very near future, and make no mistake young people will come out again in higher numbers and make their voices heard.

Youth turnout has a history of being higher, the notion that young people don’t vote and apathetic is nothing more than wishful thinking and a sham. Throughout the second half the 20th century young people voted in much higher numbers, it was only since New Labour formed – with little offering to young people – that the numbers entered decline. In the last two decades young people have not become vapid or hollow, we simply have been forced to find other ways to campaign and to organise.

Now Labour is offering us something exciting, it should have been clear we’d be back in the electoral fold.

But apparently few people saw this coming, the experts and the analysts kept repeating the line that us young people are too apathetic and too lazy to vote. They were wrong, it’s a fact any young person could have told you, but the narrative continued. We shouldn’t have had to vote to be considered worthy of space on your Sunday morning show sofa, but now that we’re doing it excuses just won’t cut it anymore.

In part this is down to a serious problem with the way the established, mainstream British media engages with young people. Our voices are given little credence, drowned out by those looking to speak about us or on our behalf. In the days following the election countless commentators have taken to the airwaves, appeared on broadcast and churned out columns, each tasked with explaining what young people think and why.

Instead young people need to be given the space to speak for ourselves, our ideologies not just dismissed by middle aged blokes in suits who claim to know better. A new media is undoubtedly forming, the days of young people turning solely to the BBC to find out what’s happening and to search for analysis are over, but these established outlets are still where the majority of the British public tunes in for debates.

Columnists in their 30s and 40s can’t be considered a voice of youth, 18-25 year olds can speak about, comment on and critique ourselves. Being young relative to the rest of the people on your payroll and radar does not, in reality, make you youthful.

The problem here extends far deeper though, young voices don’t just appear from thin air. Social media might well mean we can all share opinions and articulate to our audience, but this can’t be seen as a replacement for traditional platforms giving us a say. Editors, producers and commissioners have to make an effort to employ and engage with young people,  not treat us either as children to be patronised or otherworldly figures to be prodded at and explained.

These gaps might well exist in part due to the ever more volatile media landscape, a new generation of potential writers and commentators aren’t coming through on traditional trajectories because the money needed to go full time just isn’t there. In response publishers need to ensure young voices aren’t exploited but supported, non-traditional voices; activists and campaigners not just journalists  also worthwhile of your time.

And yes, I appreciate the hint of hypocrisy that underpins me, a young person, penning this call to action. On the one hand I’m 24-years-old now, I’m at the upper end of the demographic I’m speaking for, and one of the few who has a public platform from which to speak at that. But the exceptions to a rule do not disprove it, and unless a shakeup in imminent our media will continue to fall further out of step.

Linkedin
RELATED ARTICLES
OTHER ARTICLES
The photographer describes taking inspiration from Magnum photographers to craft an intimate and revealing portrait of the city.
Jack Lueders-Booth reflects on capturing the community that lived and worked along the city’s busiest railway route during the 1980s.
Photographer Nico Froehlich’s series documents South London’s diverse communities, while also reflecting on their fragility amid rapid gentrification.
Meg Handler’s photos capture diverse groups of New Yorkers coming together for the collective cause of civil rights.
A new exhibition is marking the photographer’s 100th birthday with a look back at his extraordinary career.
The demonstration took place this week over plans to slash £50m from arts bodies in London.