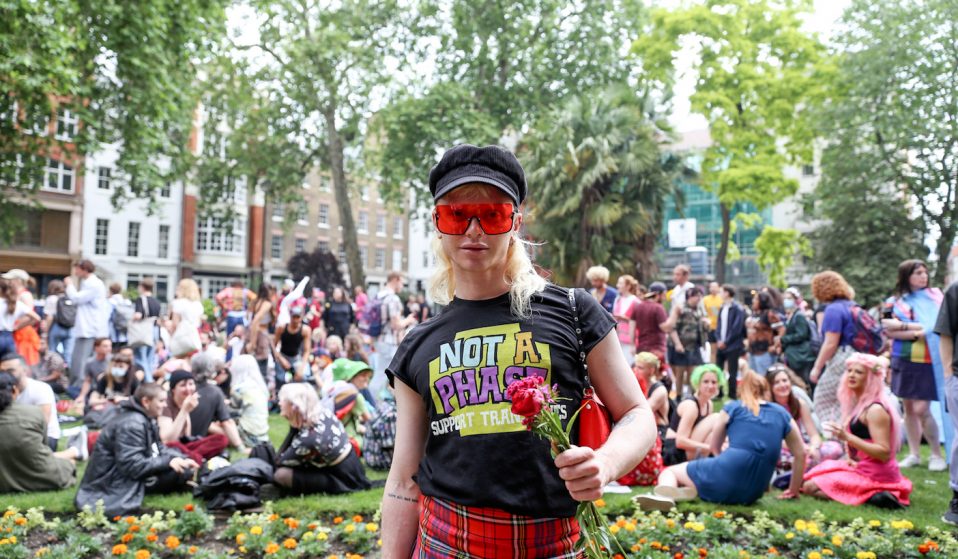 Now in its third year running, Trans Pride drew thousands of attendees. Photographer Bex Wade was on hand to capture the uplifting and poignant event.

Now in its third year running, Trans+ Pride London attracted some 7,500 attendees. Photographer Bex Wade was on hand to capture the uplifting and poignant event.

For the third year running and notably the second time during a pandemic, Trans+ Pride London was once again a moving and potent display of solidarity on the streets of London. Trans people and their allies came together as a crowd of over 7,500 people, proudly calling for liberation and a right to exist, without a hint of the corporate appropriation that has become commonplace at Pride events around the world. Demonstrators congregated and united in their demands for change and to continue the fight against the growing disregard for trans safety, healthcare and wellbeing.

My first Pride as an out lesbian was in London in 2000. It took me another 18 years to come out as non-binary. For the last three years, London Trans+ Pride has reminded me why Pride events mattered to me so much over two decades ago and why they continue to matter. Visibility, inclusion and affirmation; even if just for one day, the ability to experience these three simple elements feels radical for someone who is trans. 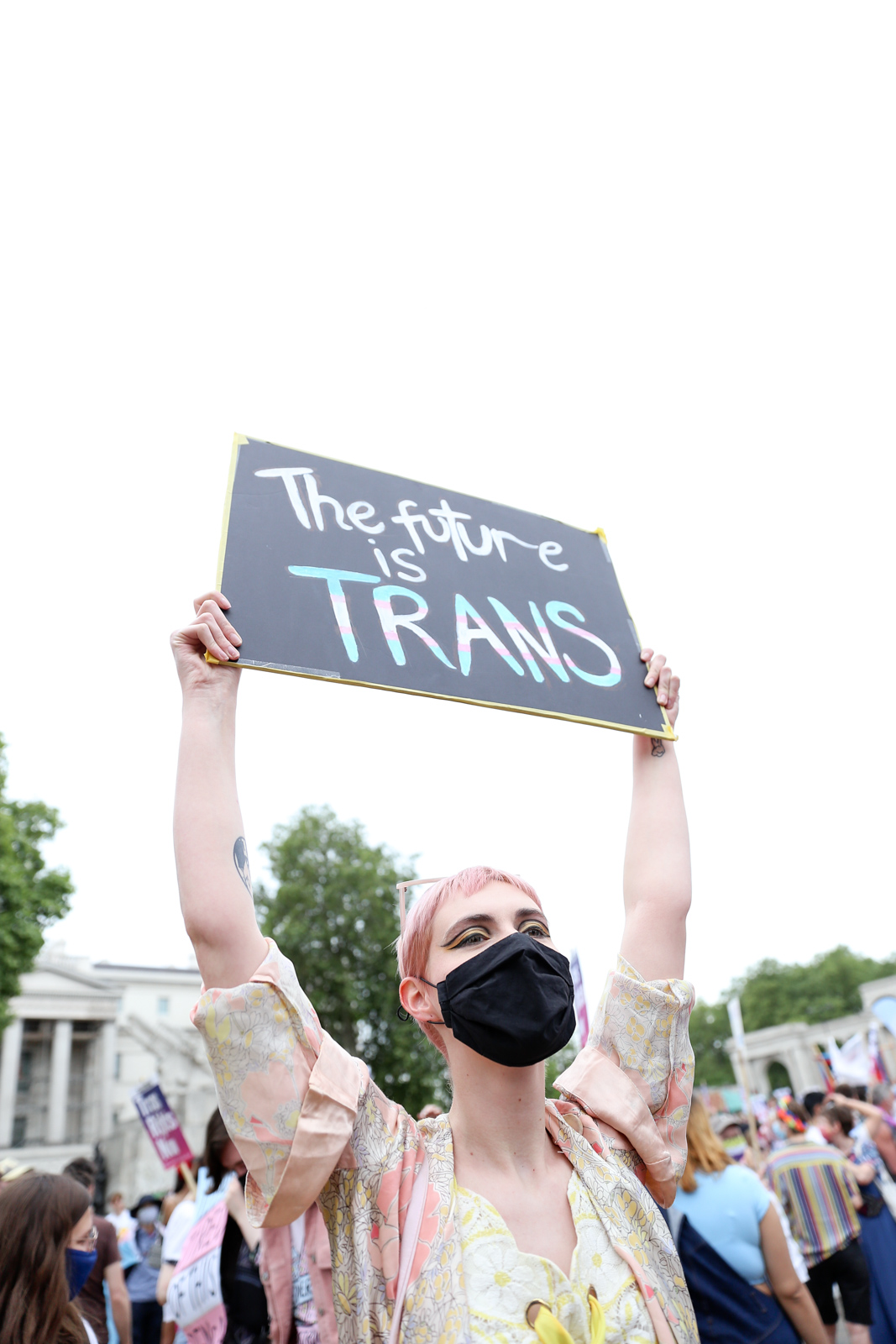 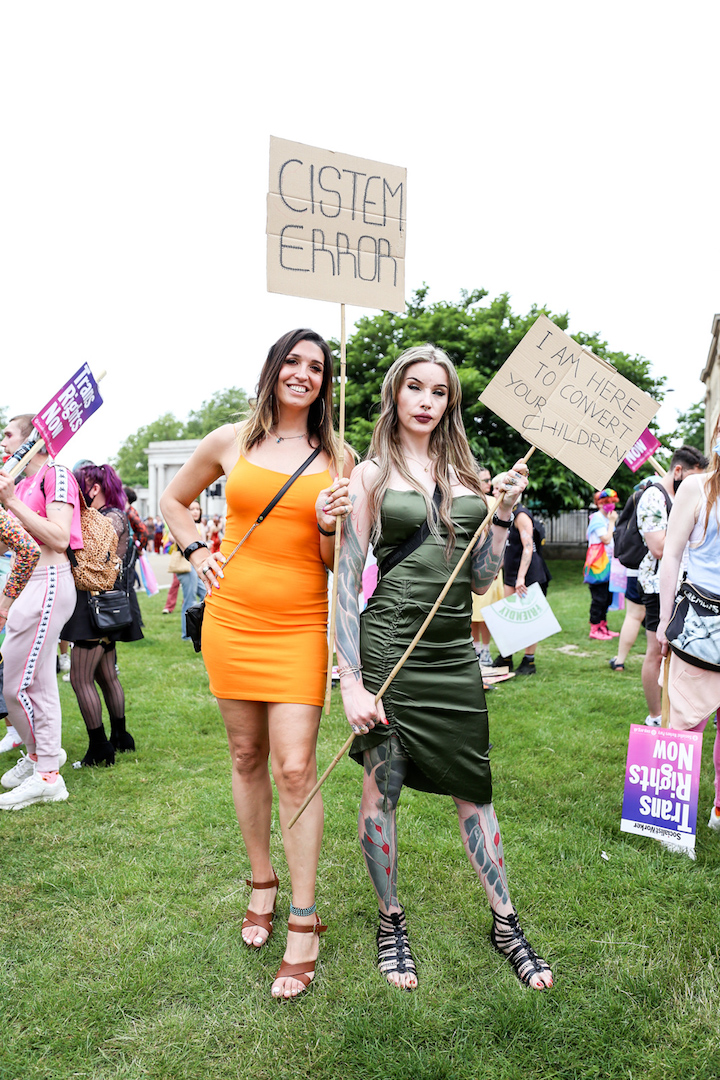 With at least three other major protests occurring in central London that day and rumblings of far-right action and a heavy police presence feared, miraculously, for once, trans people were left alone to rage and rejoice, and to simply exist. This fleeting sense of freedom felt rare. Everywhere I glanced, community was rekindling connection, reinvigorating their spirits by just being able to ‘be’. The march itself excelled in terms of accessibility. In all my years of Pride events and protests, I’d never before seen a live sign language interpretation of the chants and cries of the crowd.

The march culminated with a gathering in Soho Square. People listened attentively to rousing speeches from activists and poets such as Kai-Isaiah Jamal, Kae Tempest, Munroe Bergdorf and Bimini Bon-Boulash of RuPaul’s Drag Race UK fame. Although the organisation of London Trans+ Pride has had a reshuffle this year, founder Lucia Blake returned to address the crowd, coming straight from hospital after an operation. 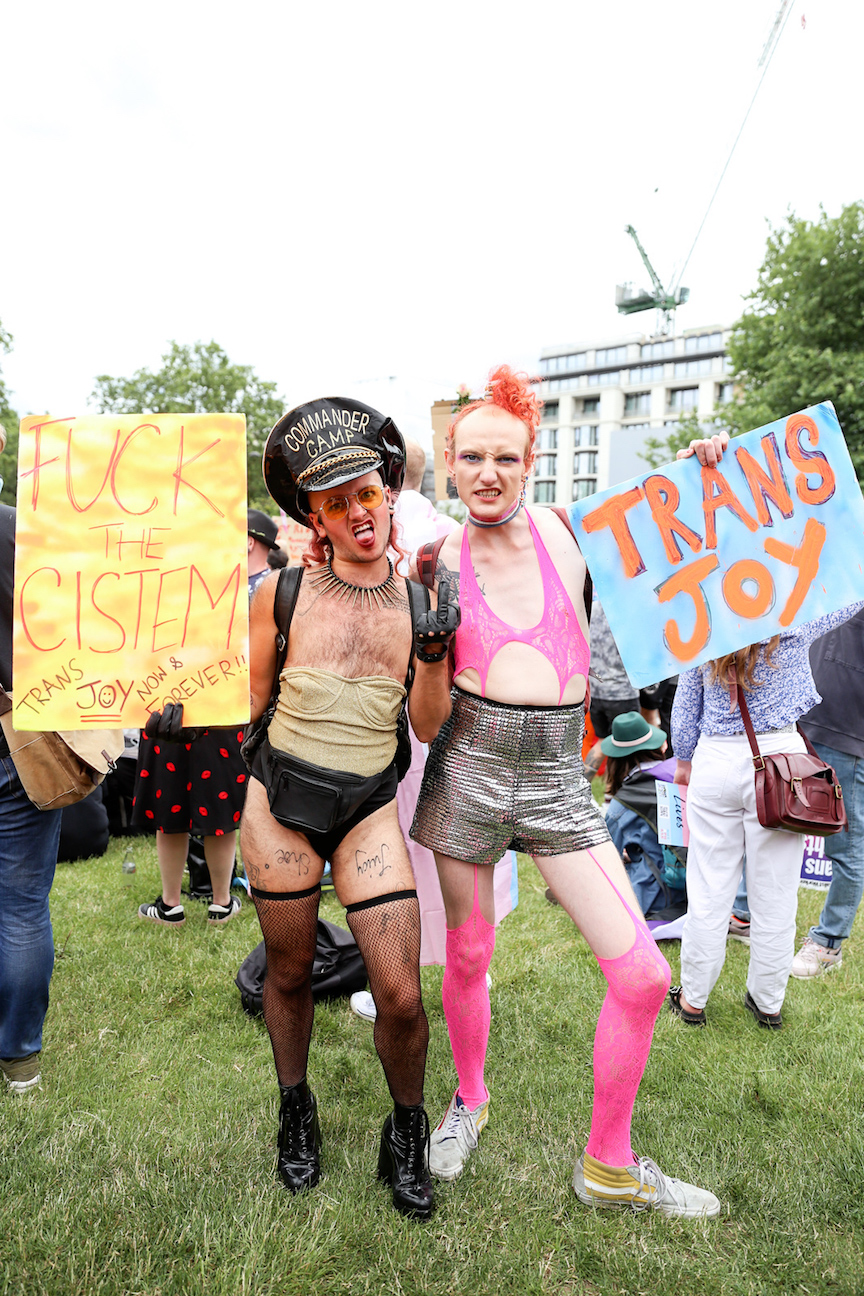 Lucia spoke about why she felt the need to attend and show her support, why the event began and why it must continue. “When you walk down the streets of Central London with thousands of people just like you, nobody can fucking touch us!” she said. “It’s about taking that confidence back into your everyday life.  I want you to wake up tomorrow and feel more confident than you did yesterday.”

After the speeches had ended, space opened up for more conversation and contemplation. I spoke to old and new friends about what the day had meant to them. Robin, who is non-binary, explained: “I think I experienced Trans+ Pride as a really significant release, a release of tension.  As I walked through Soho where I work I recognised how much of an only ‘L/G/B’ space it is. But, as I came into this square I found my people. I’ve never seen as many trans people in my life. 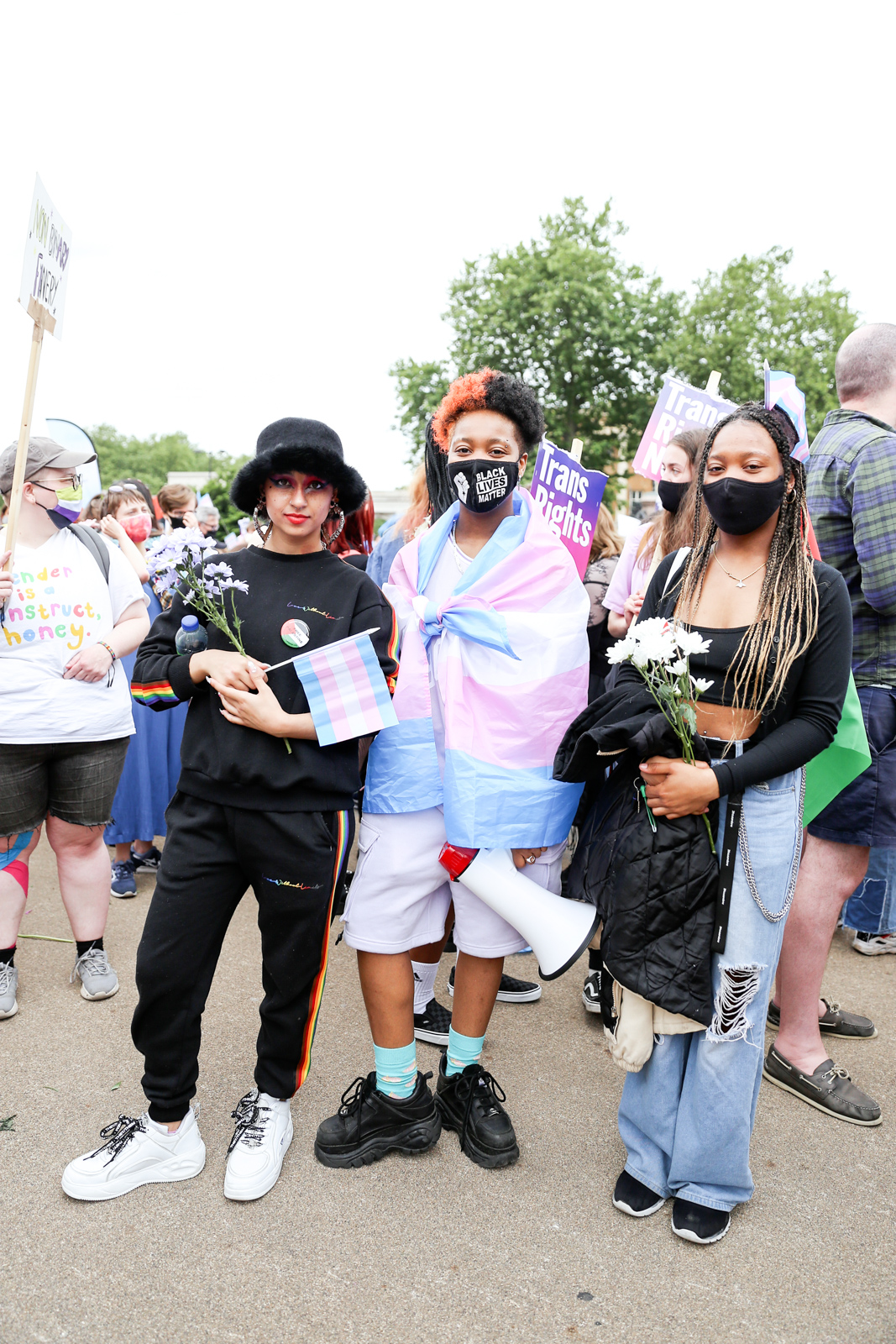 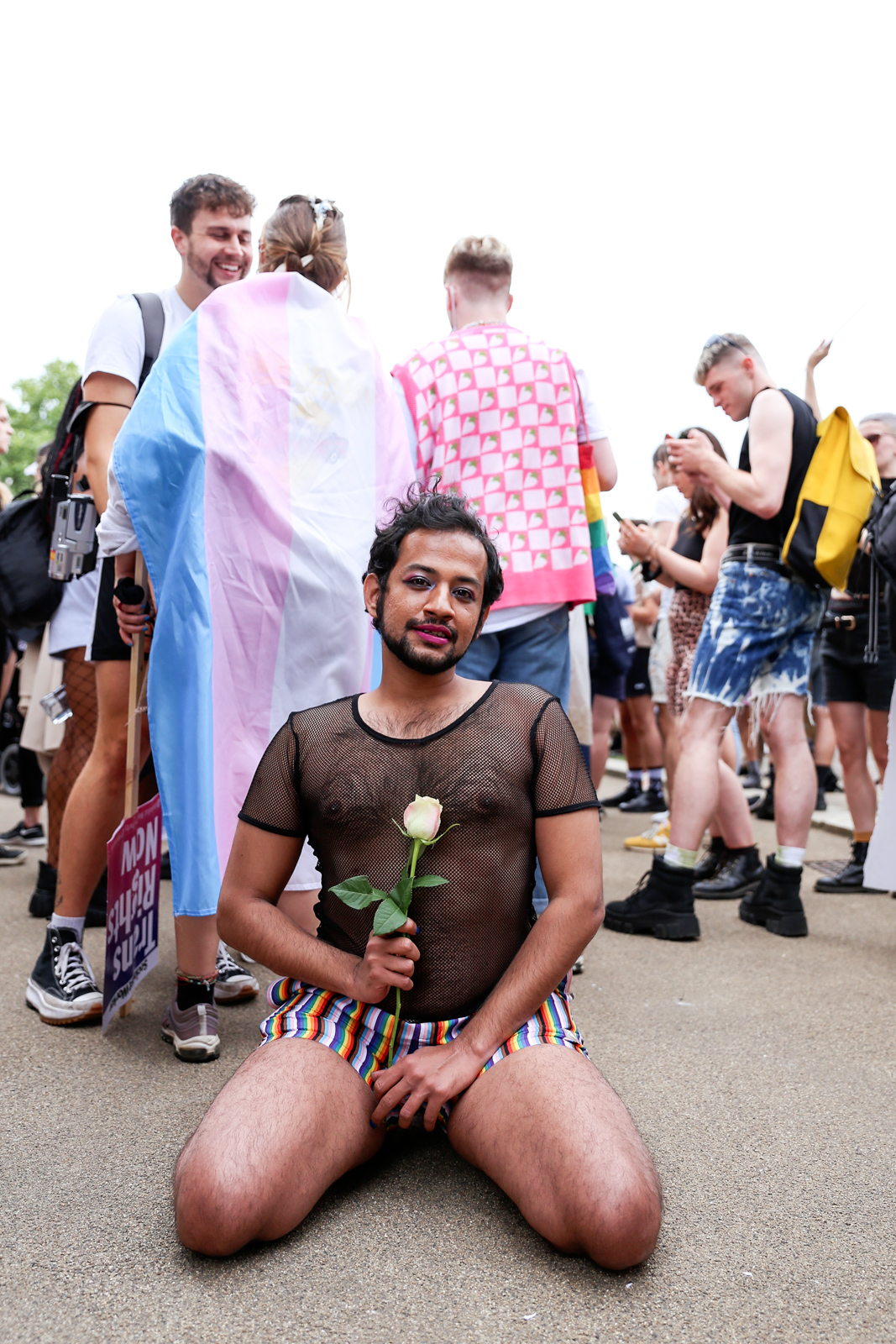 It just goes to show how we usually have no place to congregate, we have no nirvana, we have no safe places. It makes me really emotional and also makes me really sad. I’m usually the only trans/non-binary person wherever I go, so this opportunity to create kinship with others like me is unprecedented and life-changing. I never get to recognise myself in other people, ever.”

As I left the square the sun was setting and groups were still chatting, still dancing, still embodying joyful flickers of freedom and hope. What was resoundingly evident was that this trans community is strong and resilient and a force to behold. As a non-binary trans person, it feels like there is an almost daily onslaught against my validity, my gender legality and my safety in body and mind. But at Pride amongst my trans siblings and allies, I felt like a warrior. 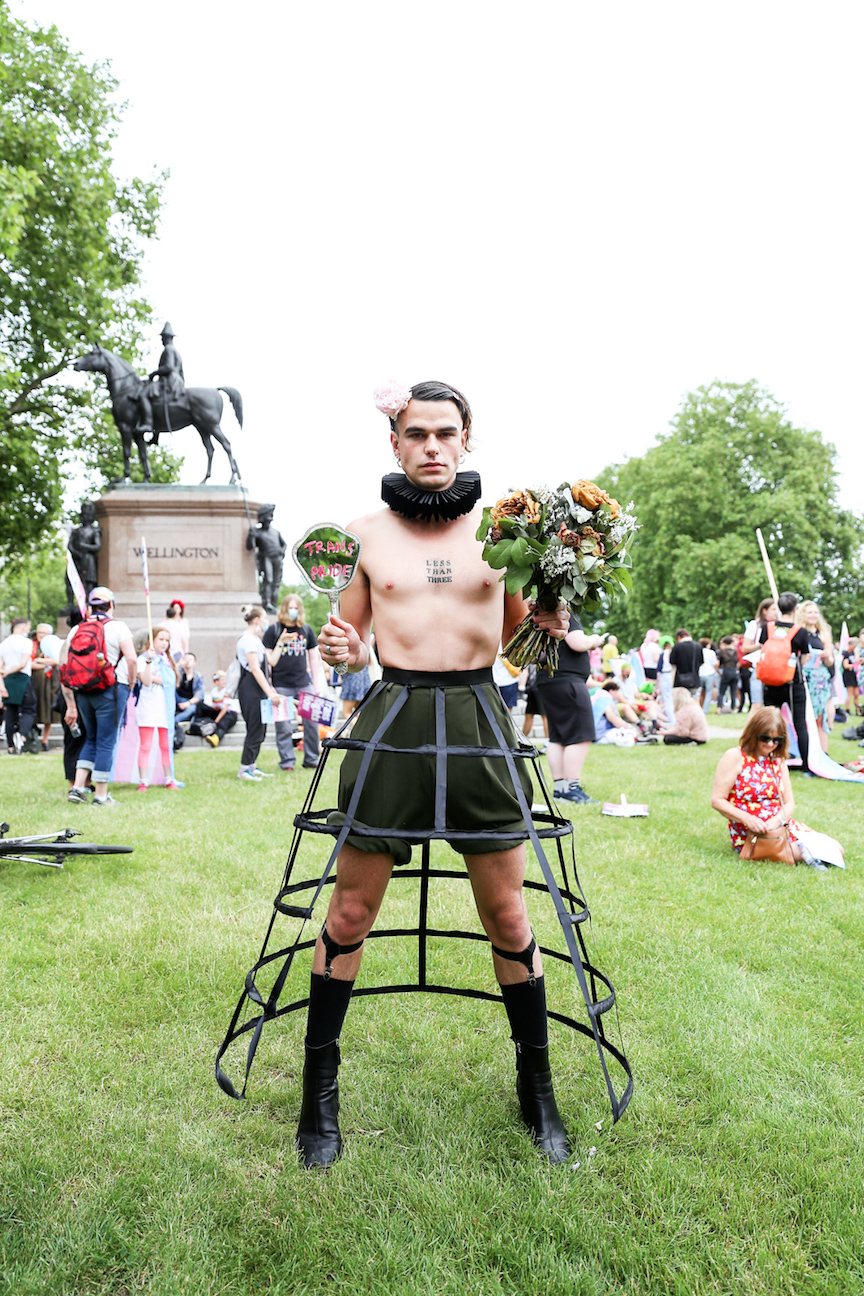 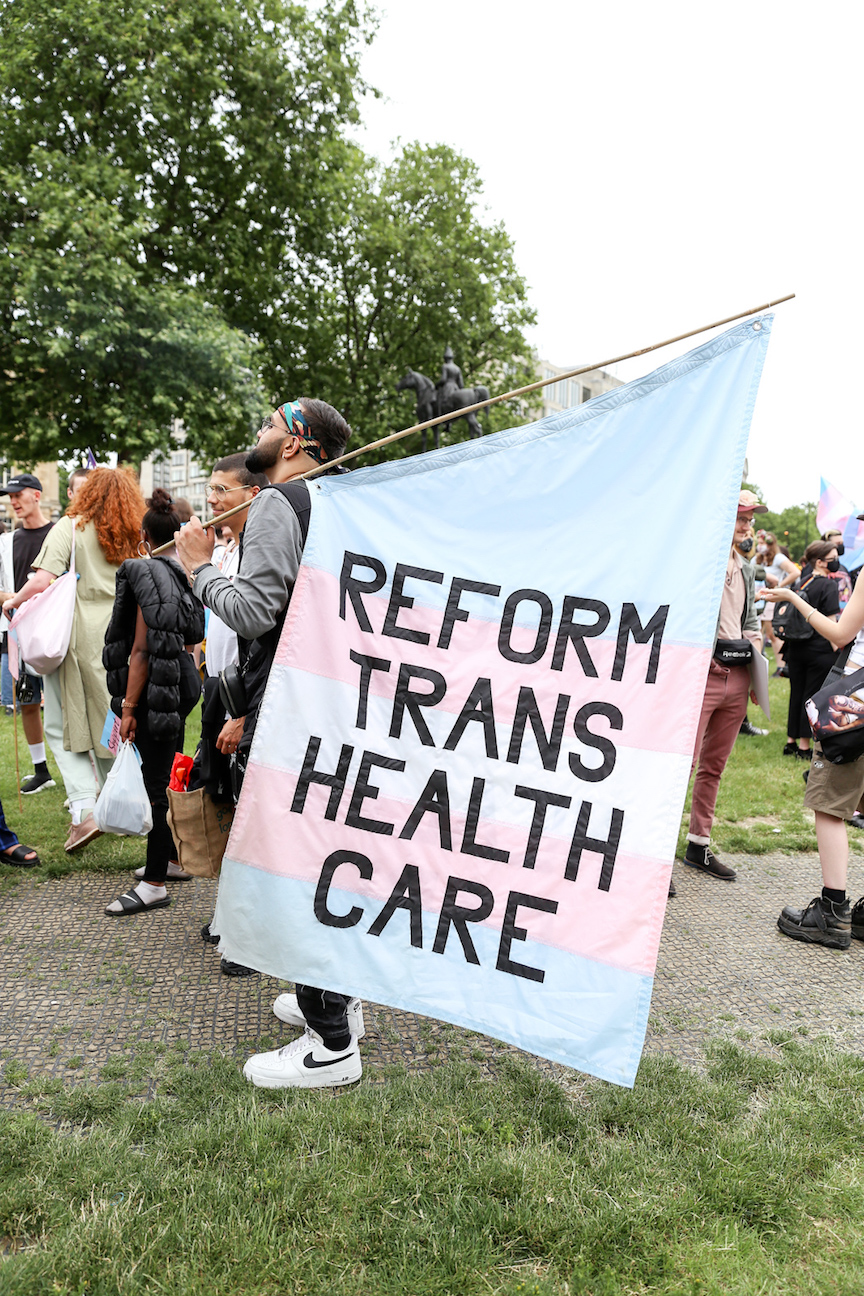 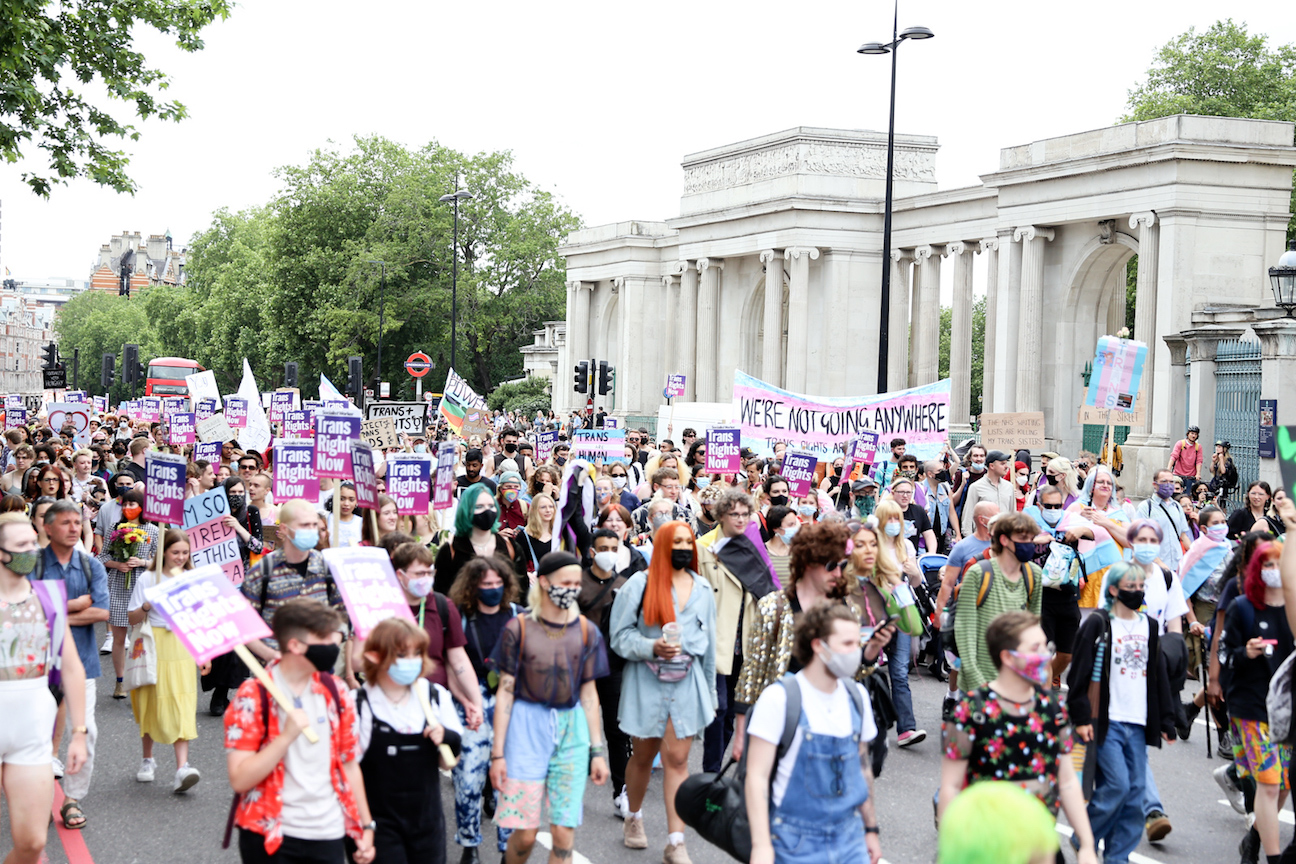 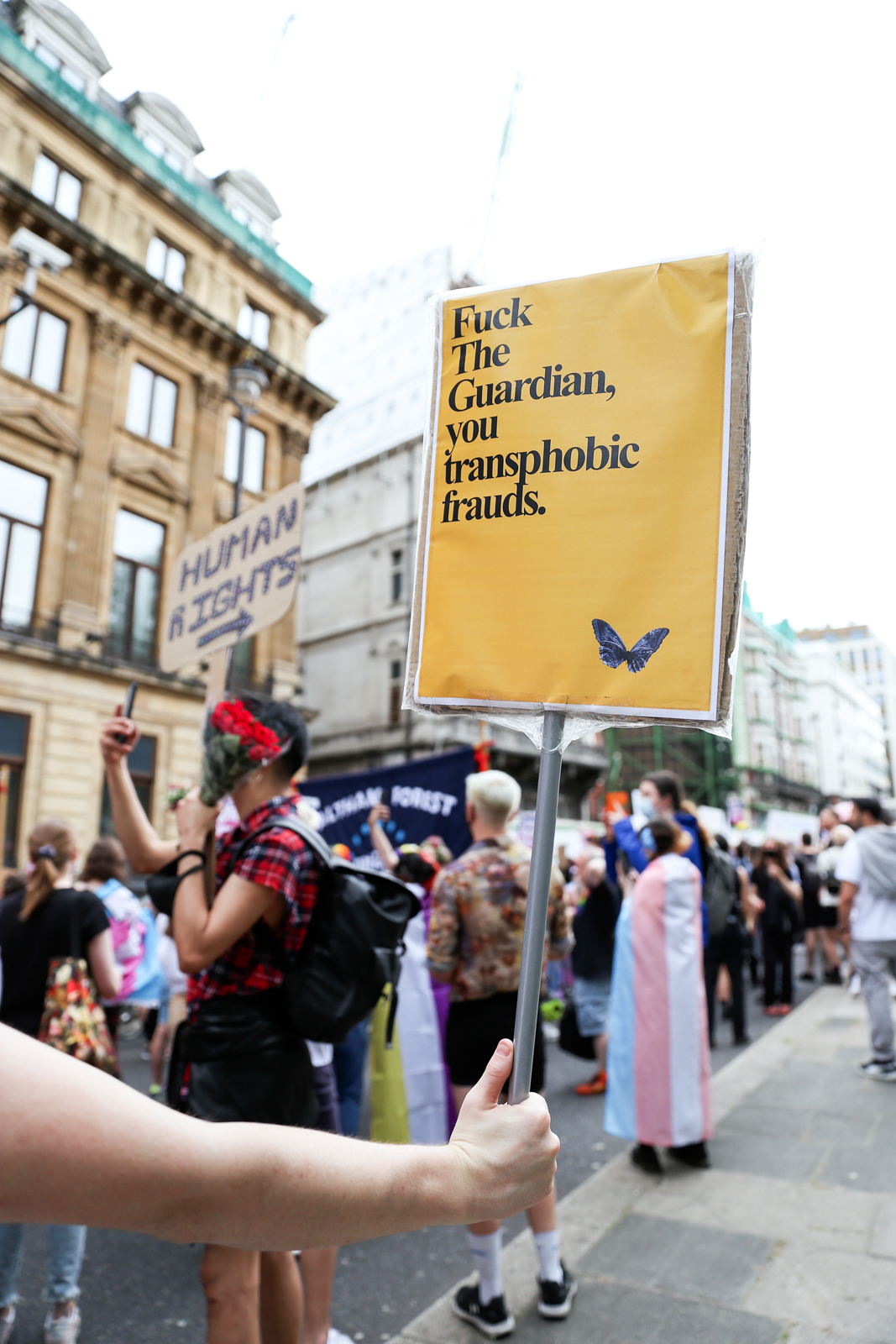 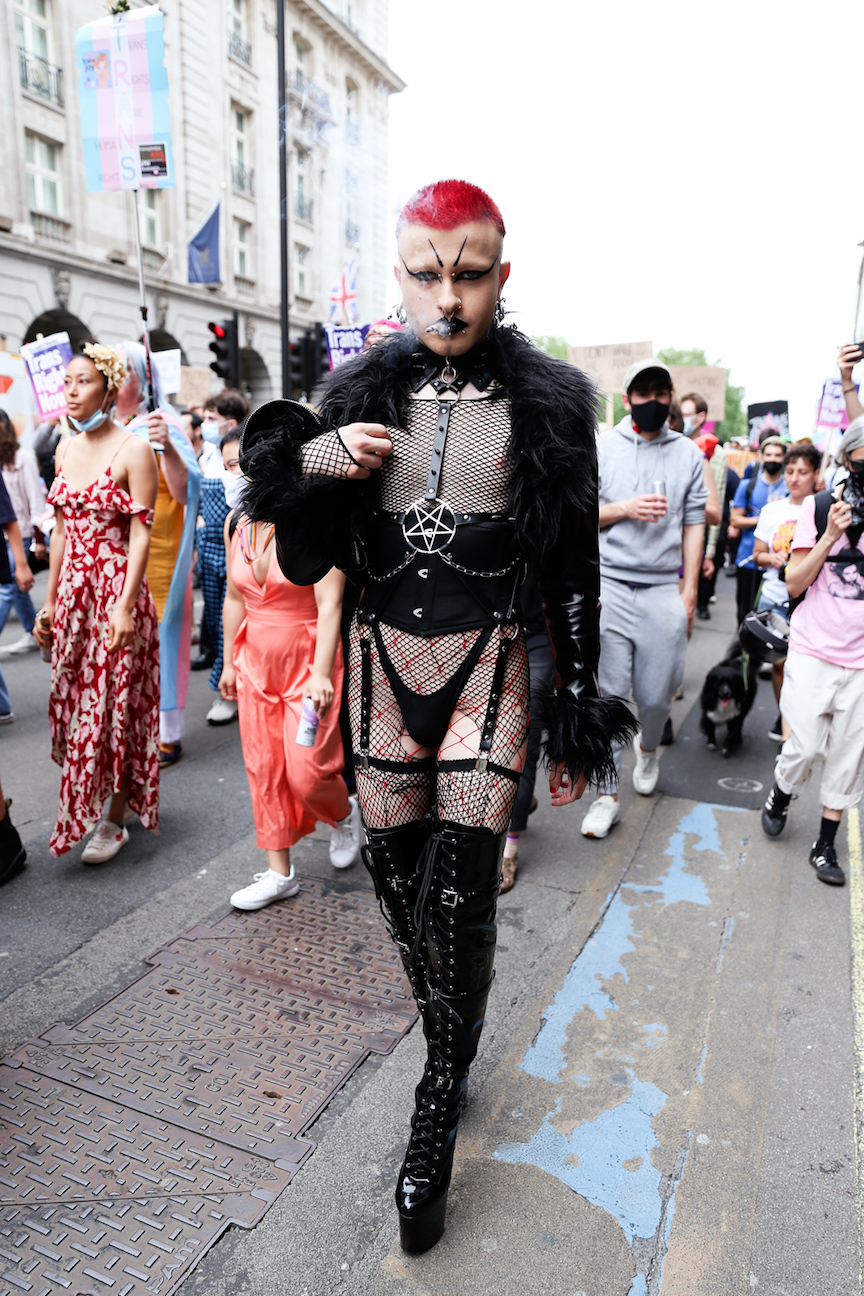 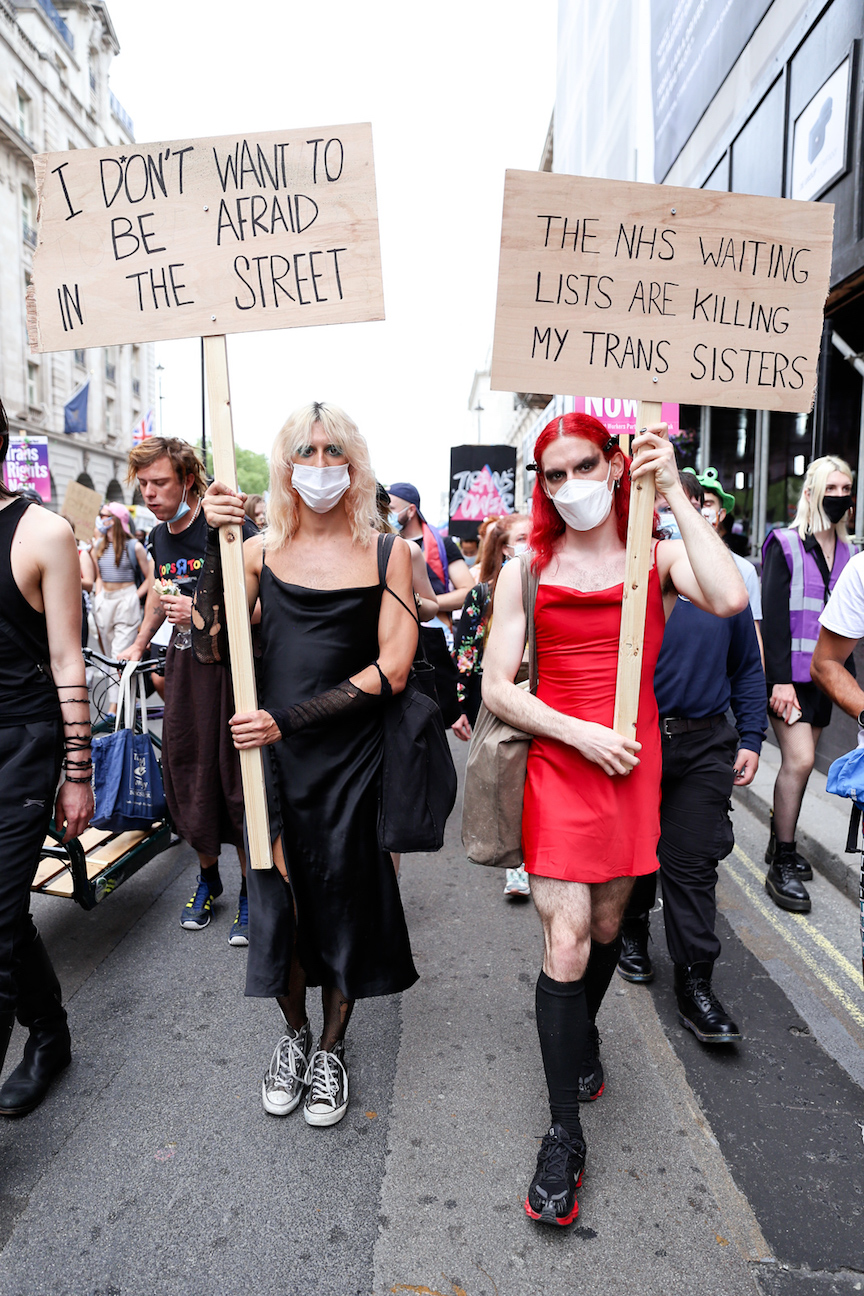 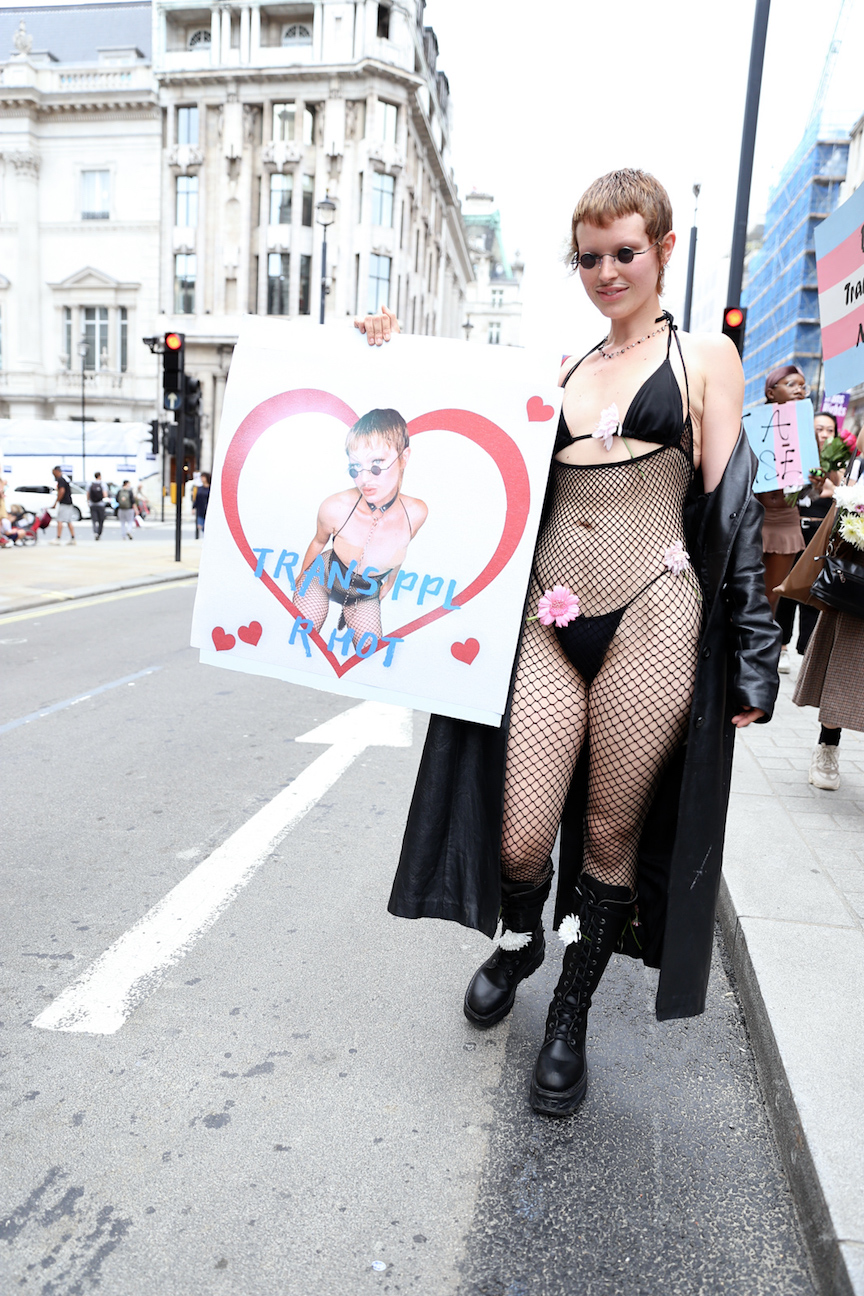 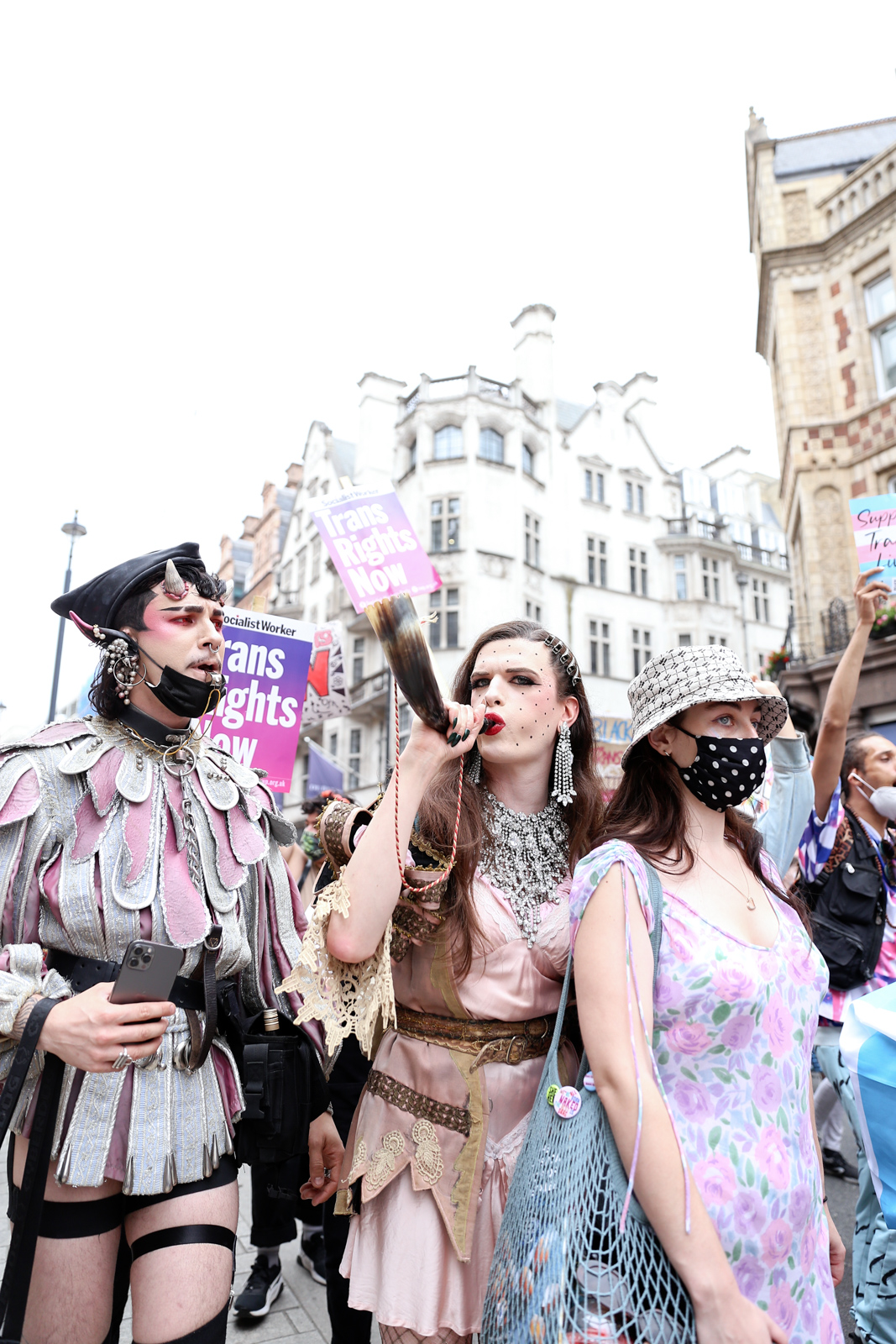 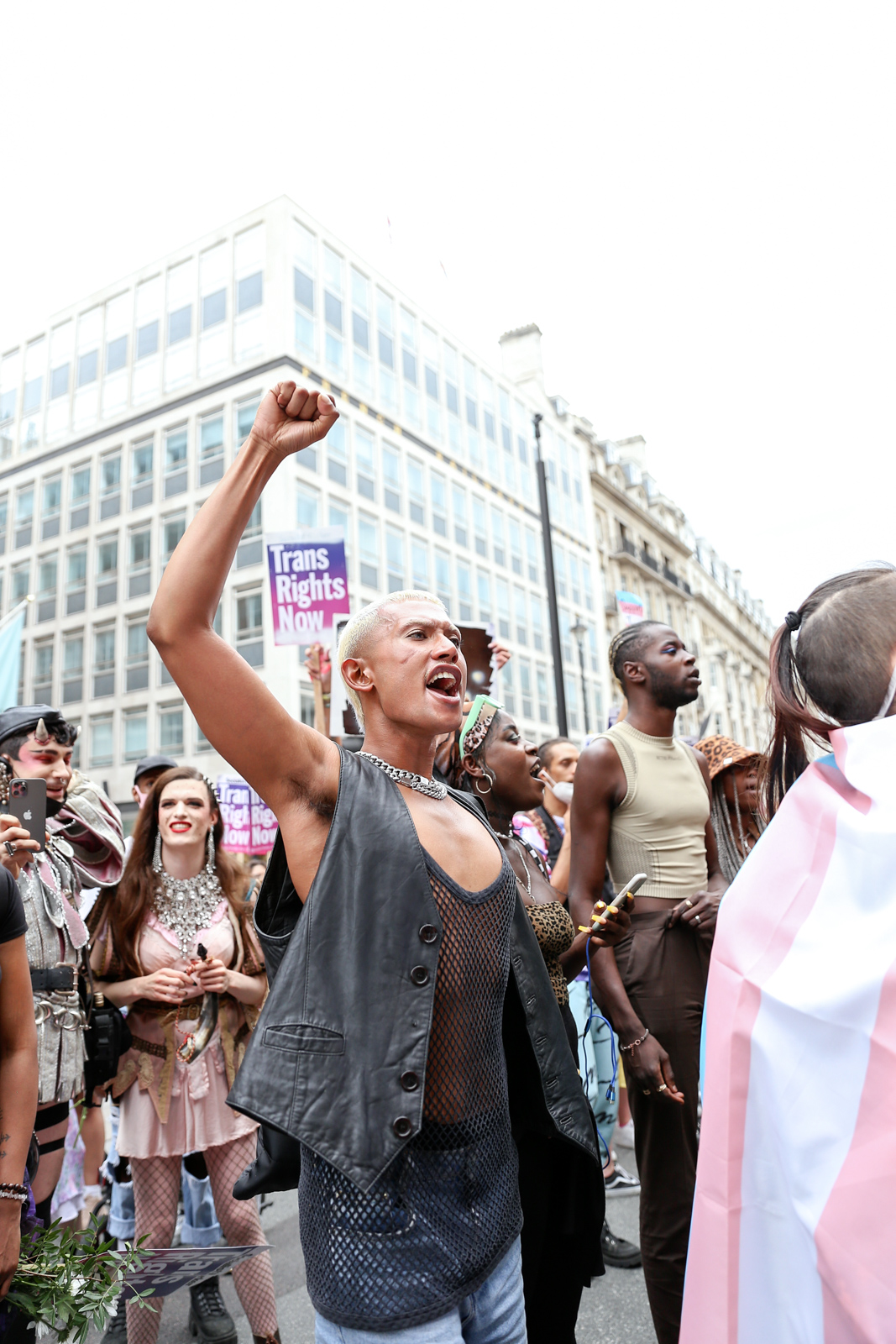 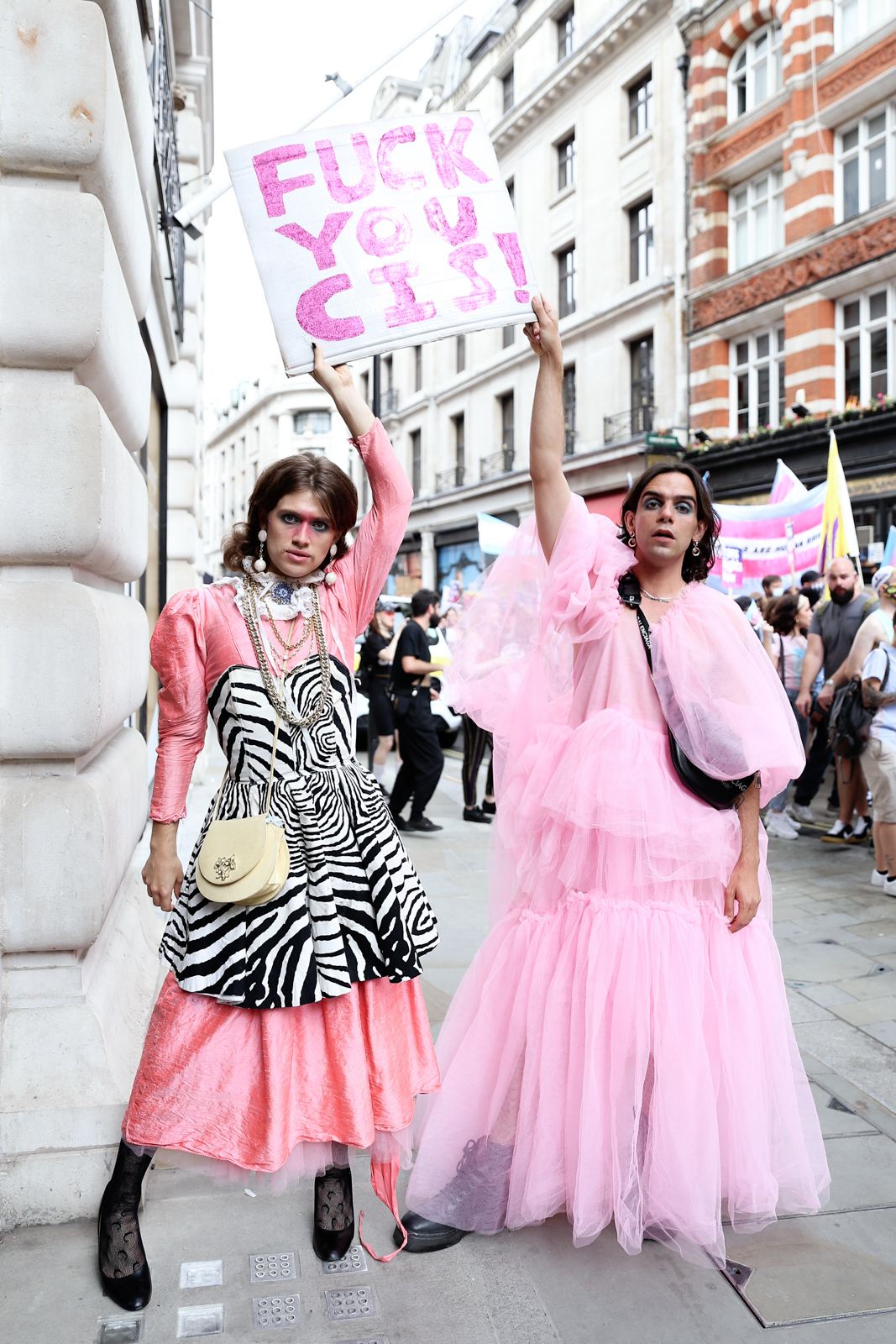 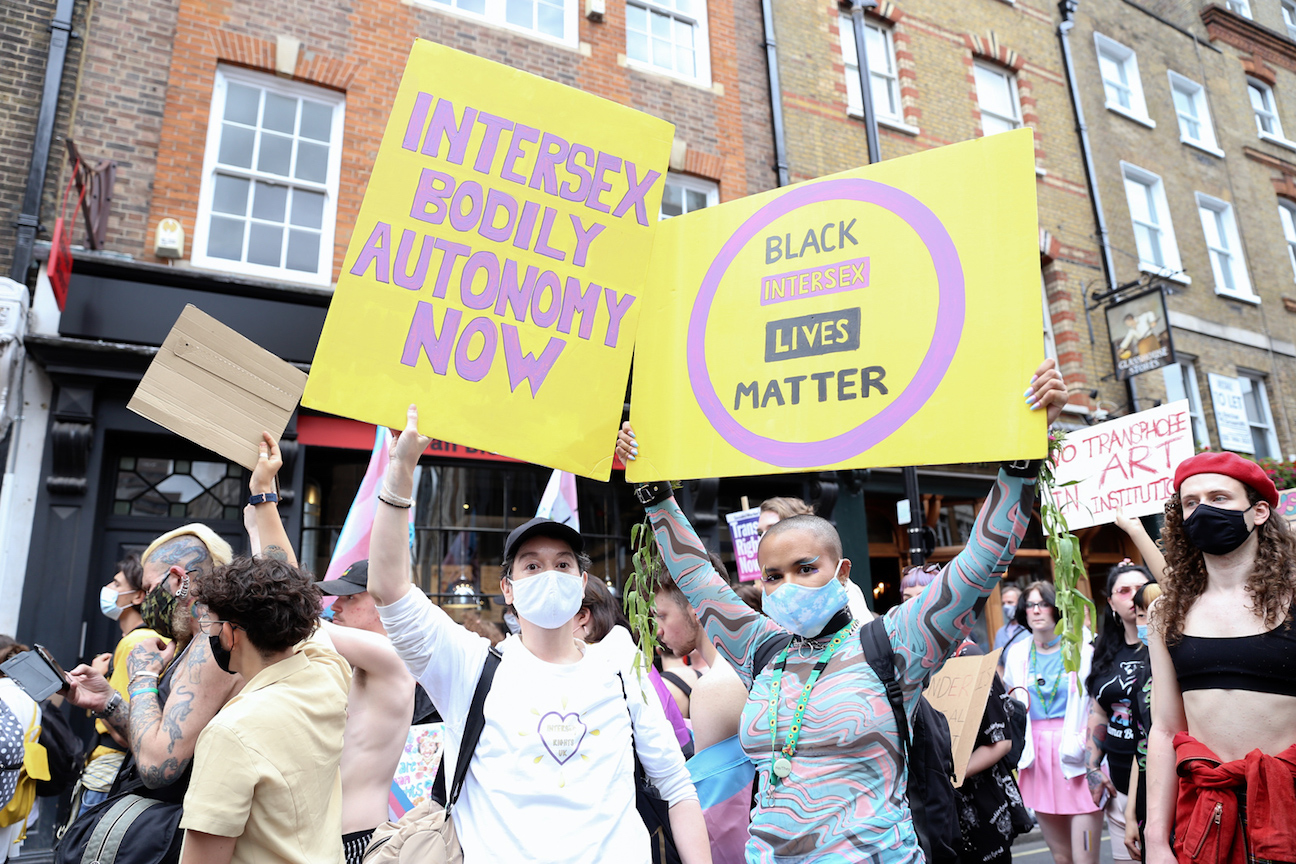 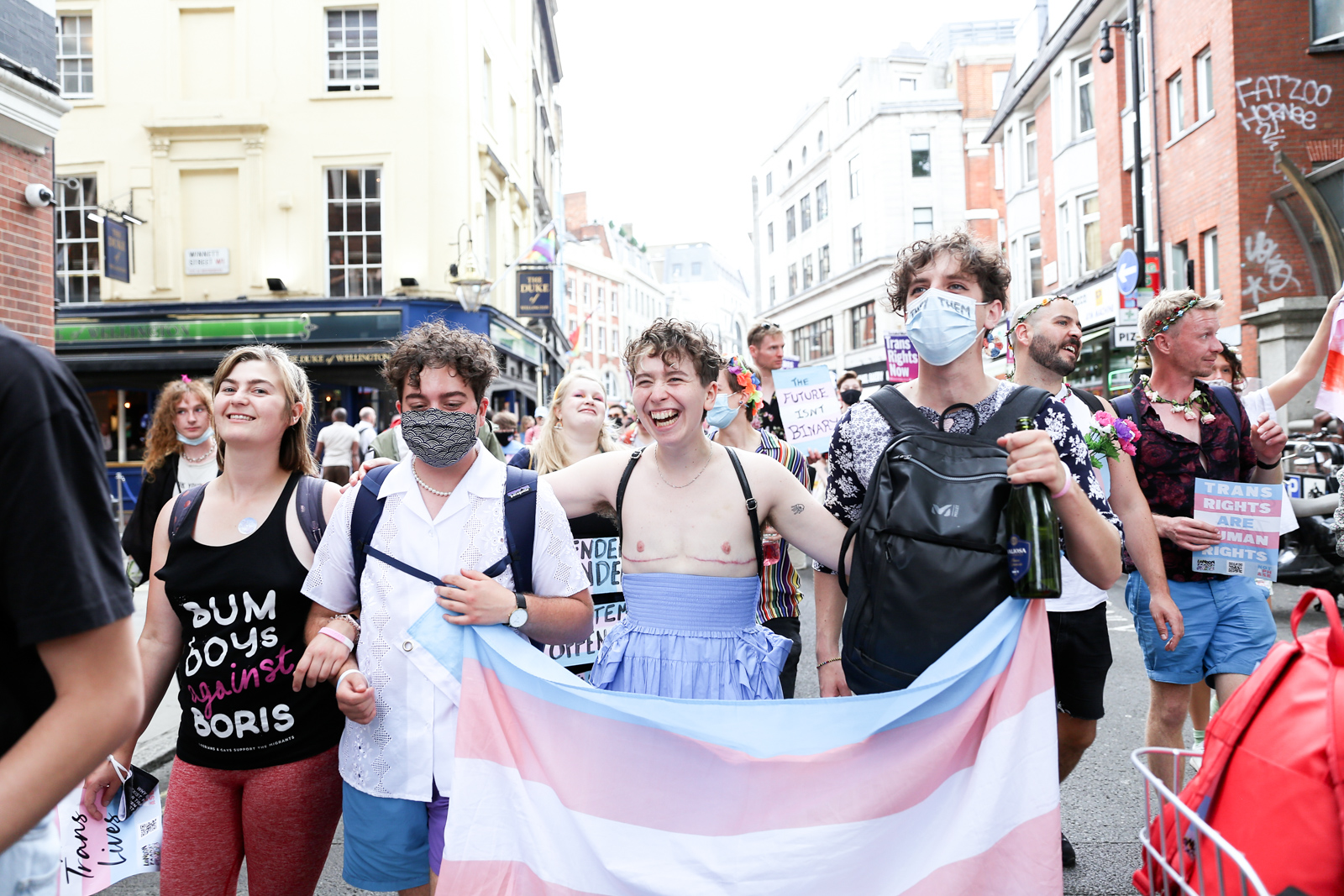 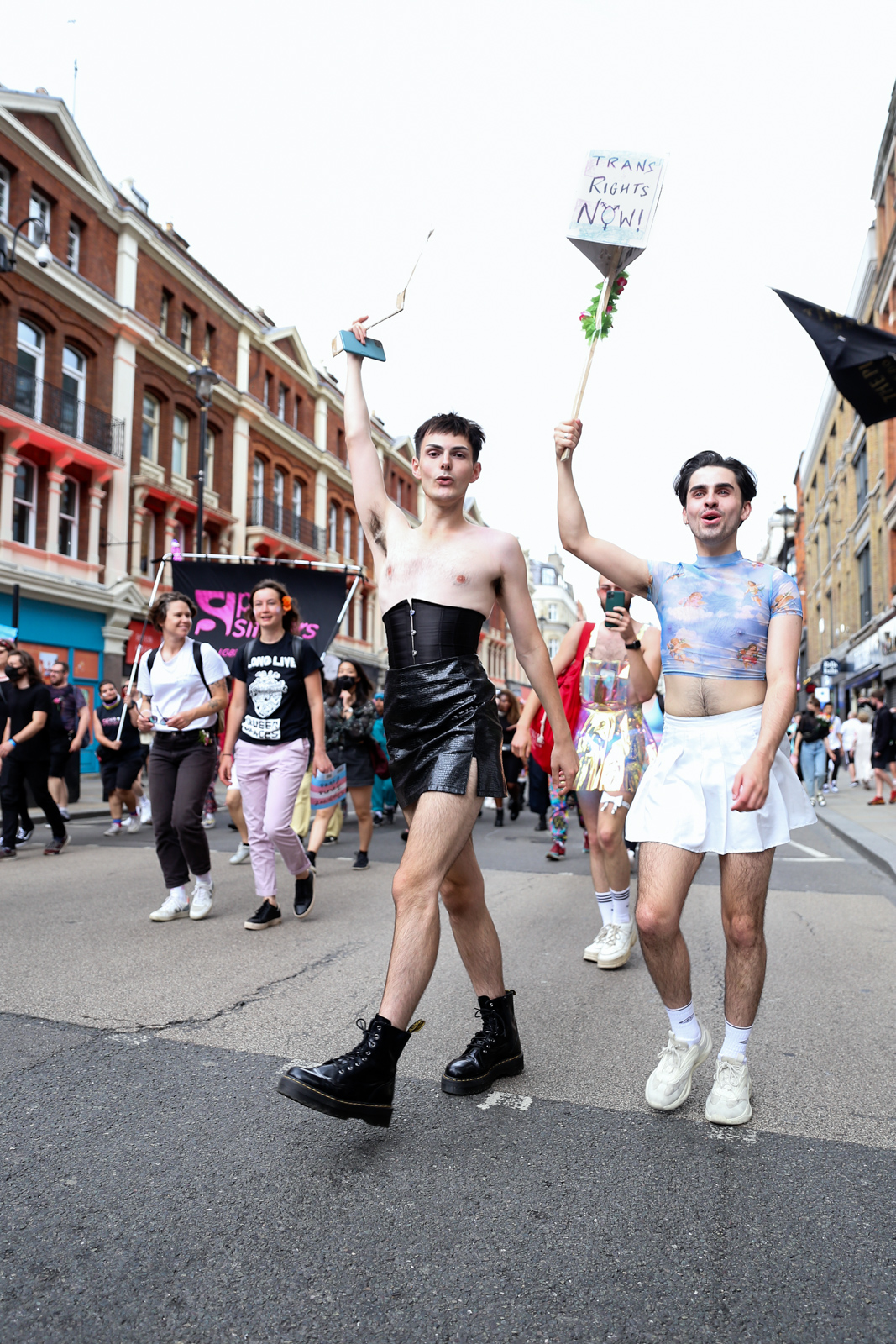 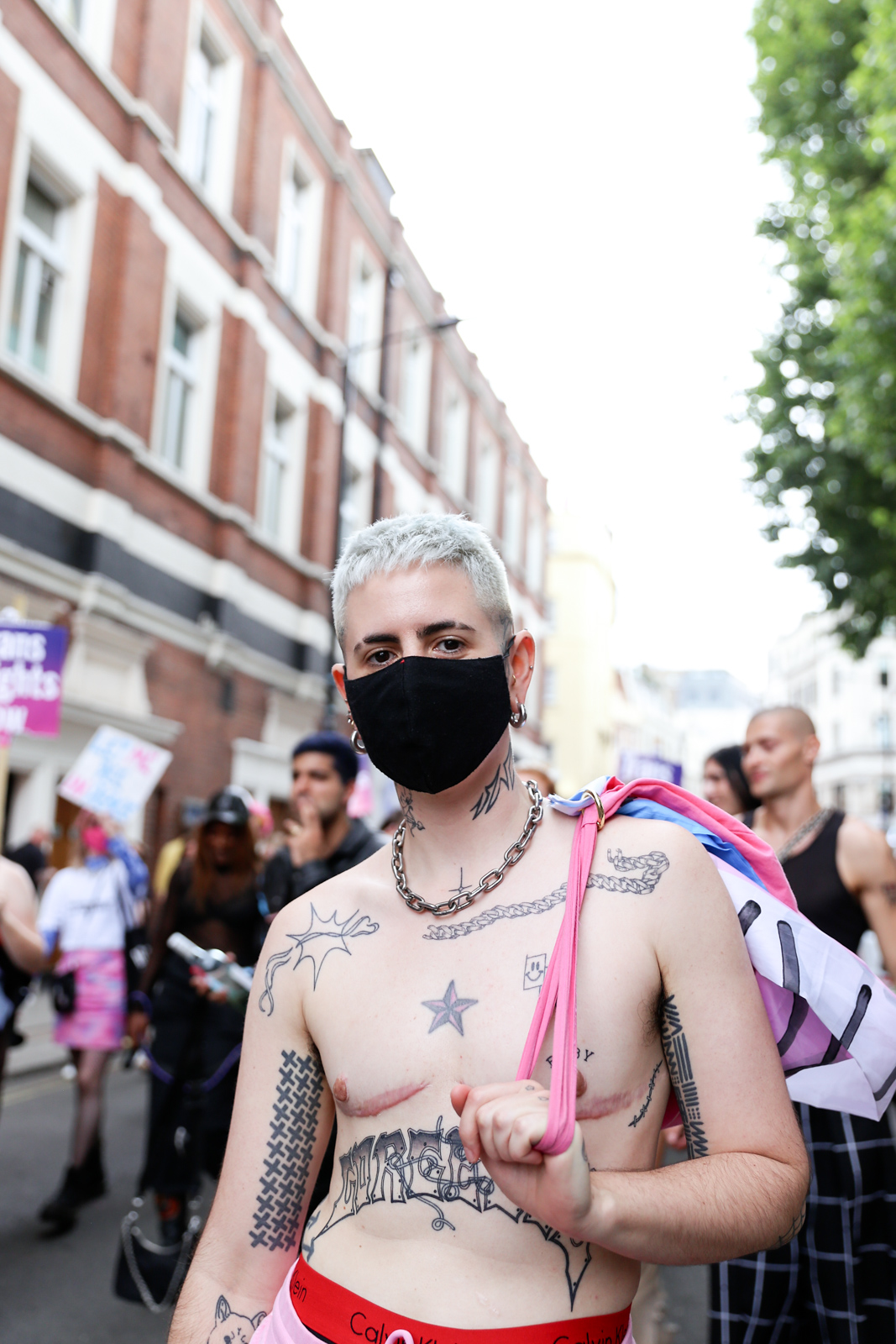 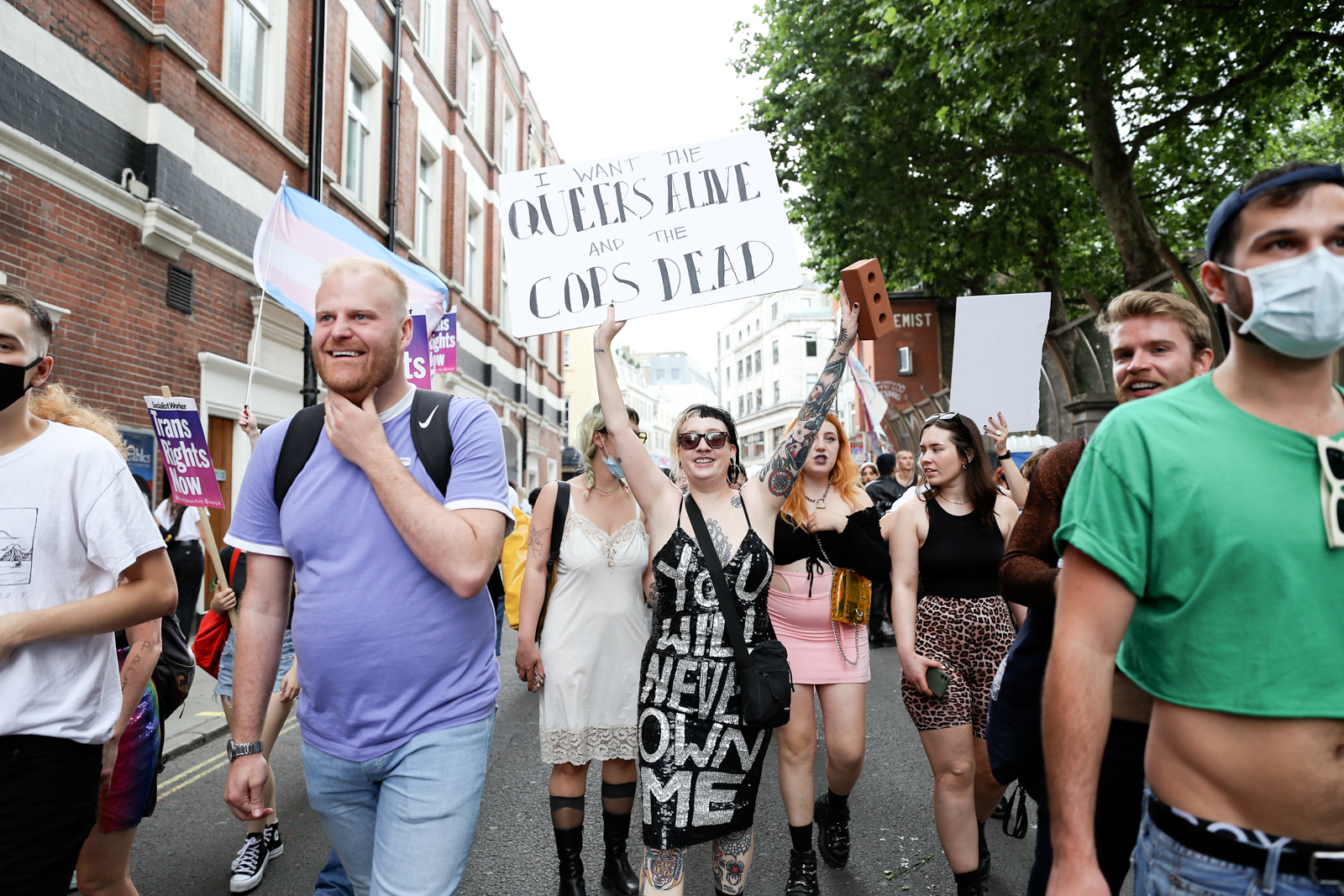 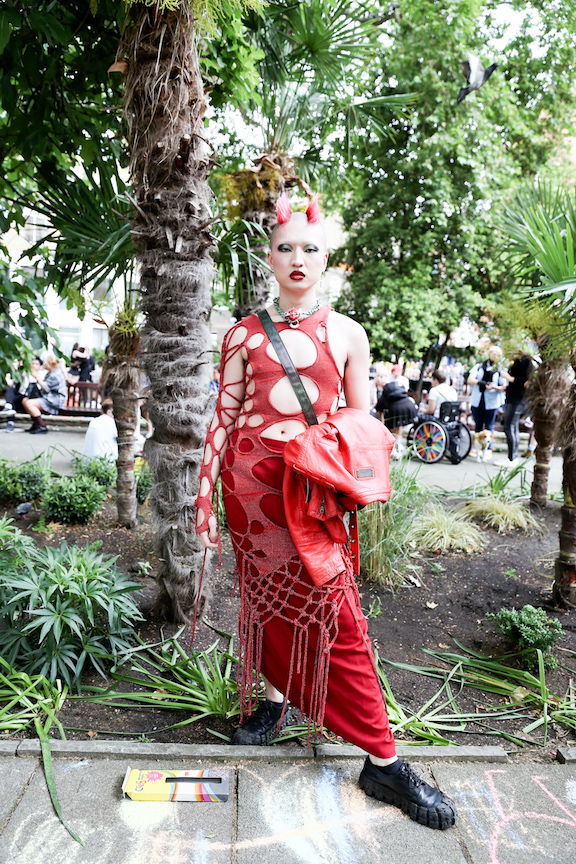 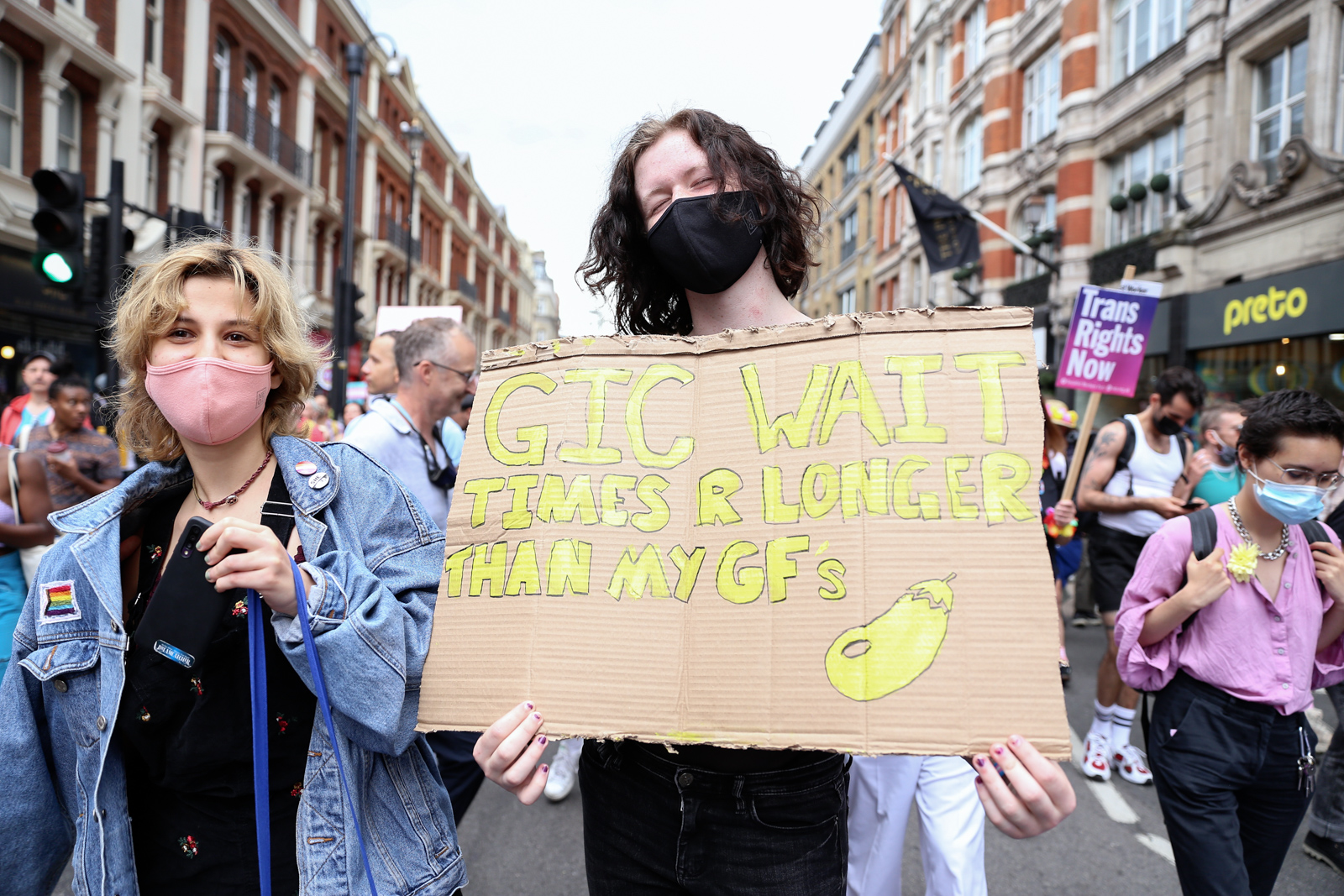 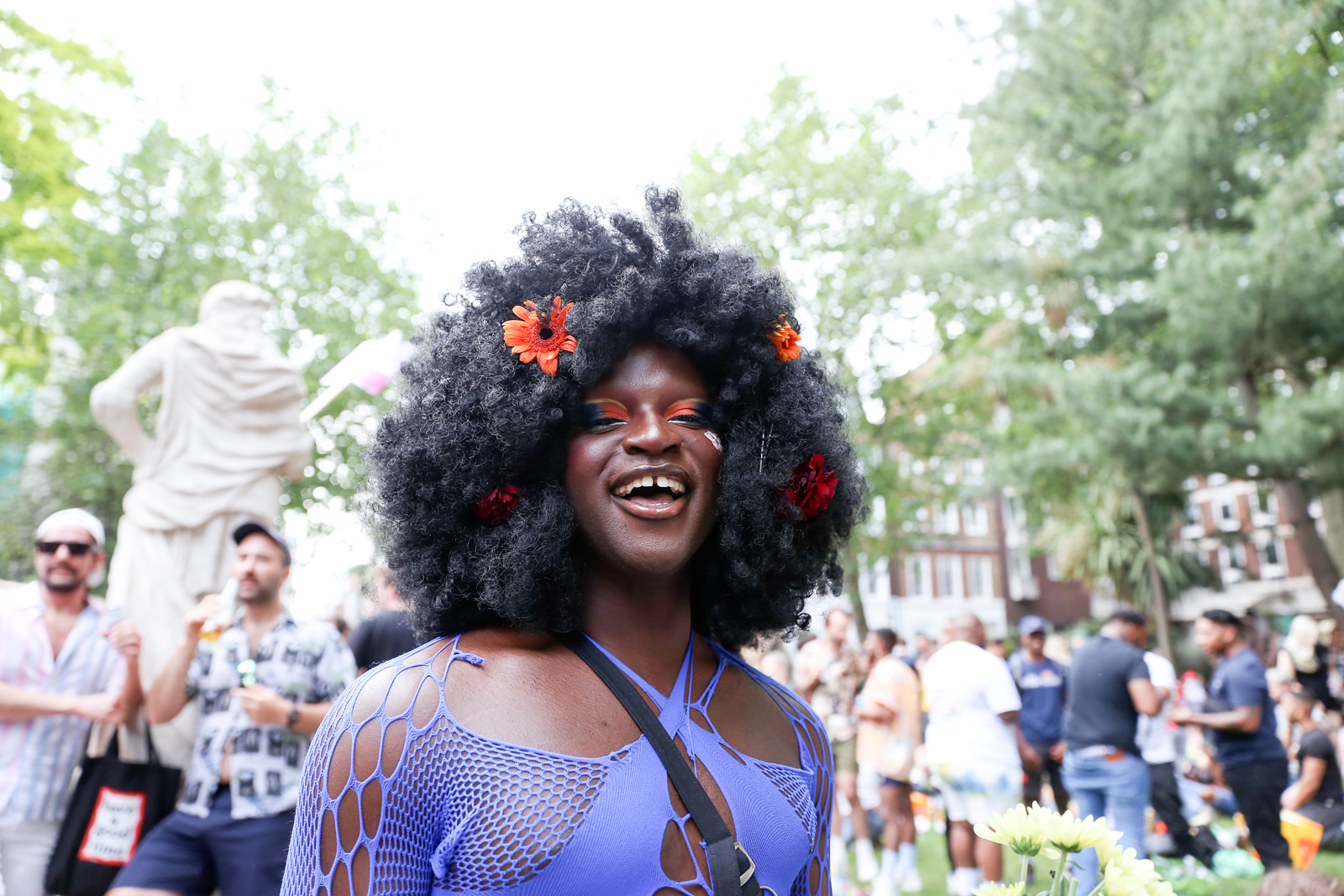 Linkedin
RELATED ARTICLES
OTHER ARTICLES
Jermain Cikic reflects on his experience of visiting the island of Samos, Greece, in the summer of 2021.
The novelist discusses his electrifying debut, which offers a deft examination of masculinity under late capitalism.
From Brooklyn gang members, to Welsh miners and the residents of East Harlem, Bruce Davidson used his camera to shine a light on the most marginalised.
The internet furore surrounding a certain NY-based furniture designer should make us question whether condemning people in the harshest possible terms harms more than it helps.
Hundreds gathered together to protest the policing bill by making as much of a racket as possible.
Photographer Yan Morvan revisits a radical moment in history, which saw the emergence of a fiercely-rebellious spirit among the UK‘s youth.