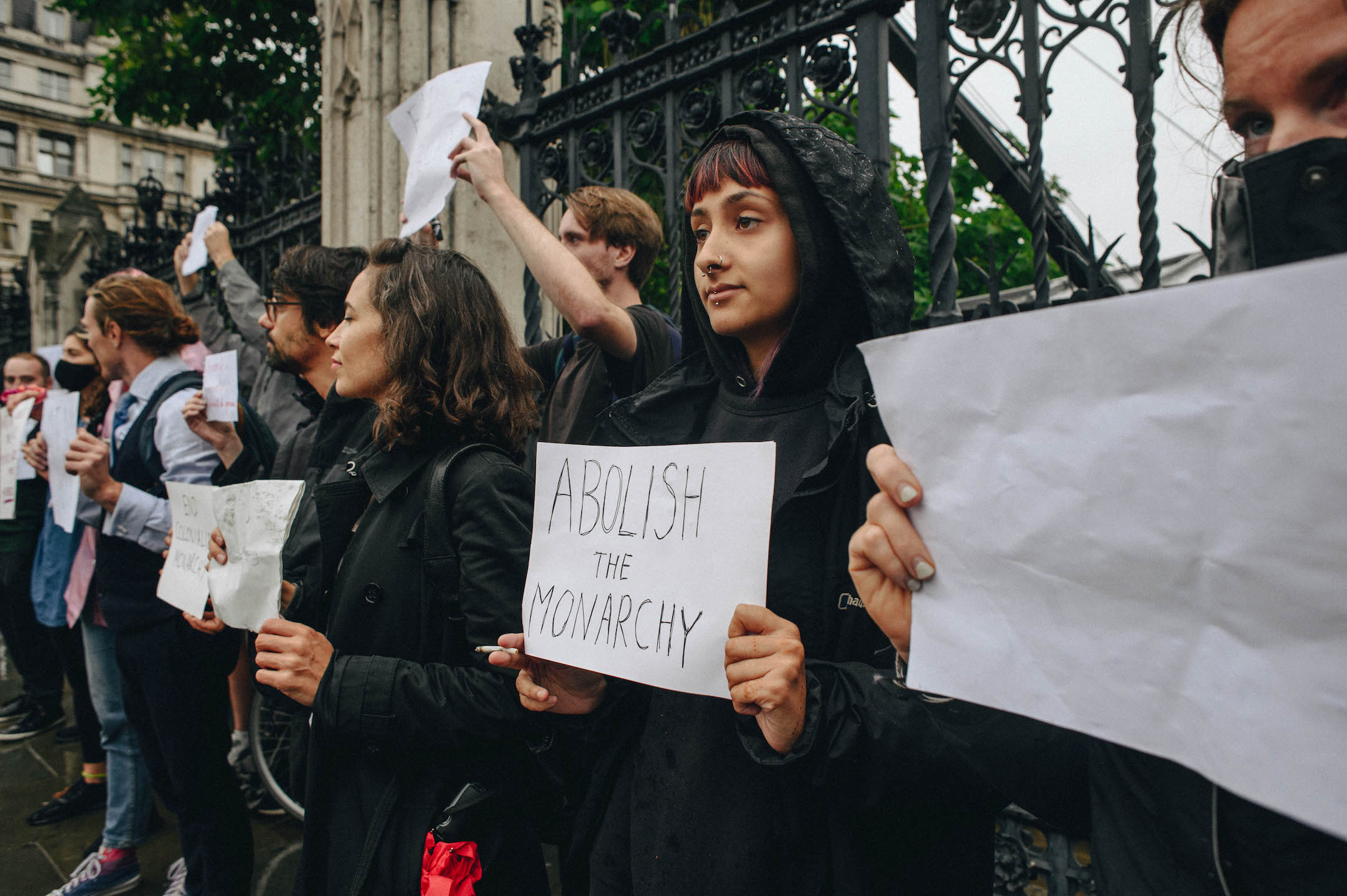 Demonstrators gathered outside of Parliament to voice their concerns about the monarchy and the crackdown on dissent.

Yesterday, demonstrators gathered outside of Parliament to voice their concerns about the monarchy and the crackdown on dissent.

When a monarch passes a series of plans are set in motion. In the case of Elizabeth II, an elaborate programme of events intended to memorialise her immediately kicked off, from processions to periods of lying in state. Final journeys and services across the country, days of national mourning, all building to a massive funeral at Westminster Abbey 10 days after her death.

Simultaneously, Charles, her heir, ascended to the throne. Behind a veil of mourning, a huge transfer of power has taken place, with her first born son now sitting as head of state, commanding a vast estate and a pivotal constitutional role. His position as monarch means he escapes 40 per cent inheritance tax on a half billion pound fortune that passes to him.

There are many – one in five people in this country – who believe this is wrong, and that we should abolish the monarchy. Another one in five “don’t know” whether we should have a republic. Further to this, there is not insignificant disquiet within the country around the alleged actions of certain Royals, specifically allegations of sexual assault aimed at Prince Andrew Duke of York. Earlier the year the Prince, reportedly with the help of the Queen, paid £12 million in a settlement to his accuser according to The Telegraph. It was reported this morning that the Prince will be taking up Royal duties after being stripped of them following the allegations.

It is within this context that people have taken to the streets to voice their dissent. In Edinburgh, just moments before the Proclamation of King Charles III, a woman appeared in the crowd holding a sign stating “Fuck Imperialism, Abolish Monarchy”. She was promptly bundled off by police, arrested and charged with breach of the peace.

As the procession of the Queen’s coffin made its way through Edinburgh, followed by King Charles and senior royals including Prince Andrew, one man shouted, “Andrew you’re a sick old man”. He was wrestled to the floor by members of the public and escorted off by the police to be arrested and latterly charged, again, with breach of the peace.

In Oxford a man shouted “who elected him” during the proclamation of King Charles and was promptly arrested, though was later de-arrested. In London, video of protesters holding signs saying “not my king” outside of Parliament being moved on by police sparked outrage. Barrister Paul Powesland headed down to the palace of Westminster holding a blank piece of paper and filmed an interaction between himself and a police officer who threatened to arrest him if he wrote “not my king” on the paper.

The crackdown on dissent follows sustained efforts by the Tory Government to push through legislation which critics have stated will vastly undermine the right to protest in this country. In the aftermath of the arrests, various political commentators and politicians have voiced their concerns with the Metropolitan police being forced to tweet a statement reaffirming the right to protest.

Against this backdrop protestors gathered outside of Parliament last night to voice their concerns about the monarchy and this authoritarian crackdown. The protestors came with blank pieces and wrote anti-monarchy messages to mimic the action by Powesland. Photographer Aiyush Pachnanda was there to capture the action. 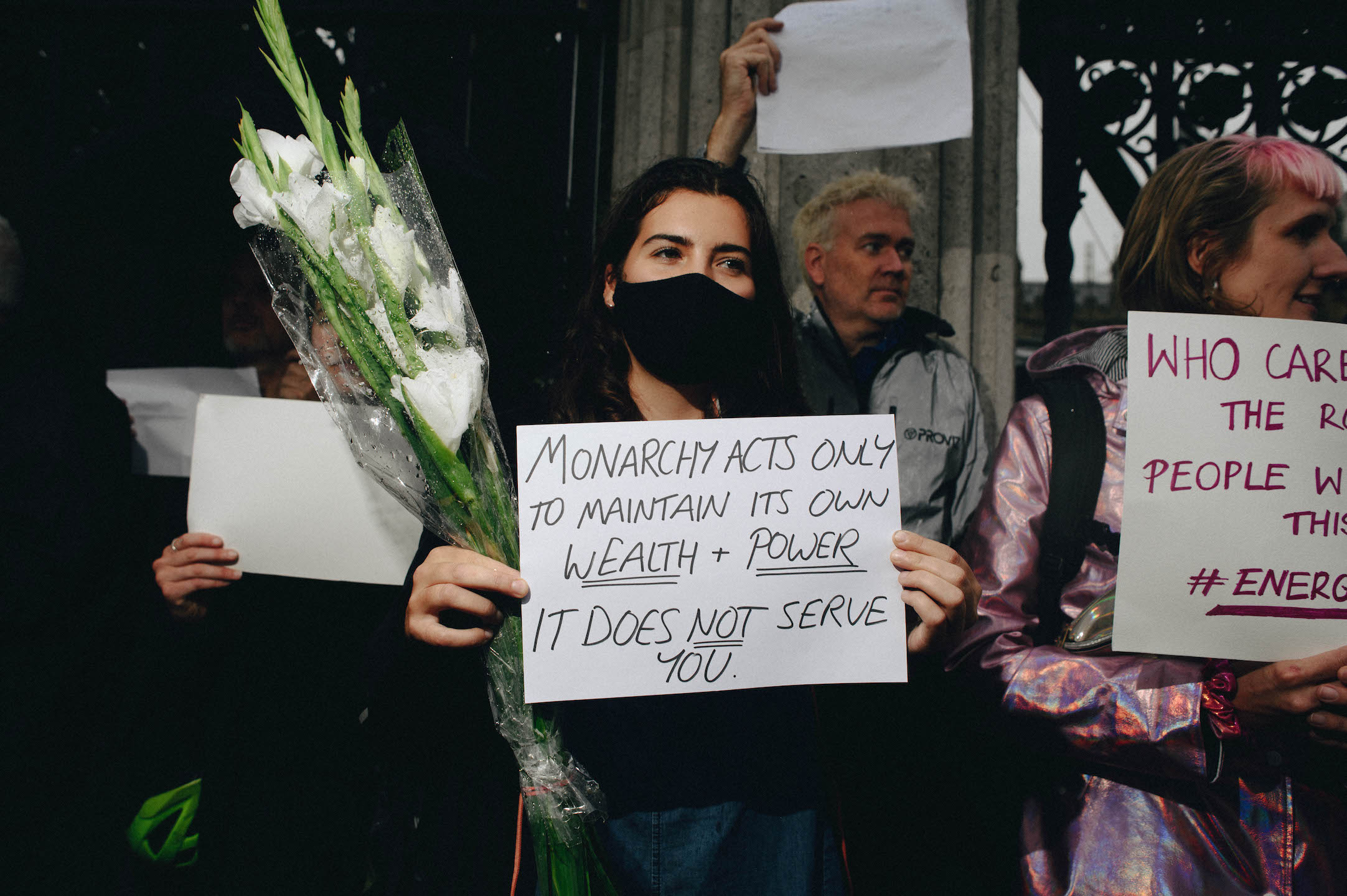 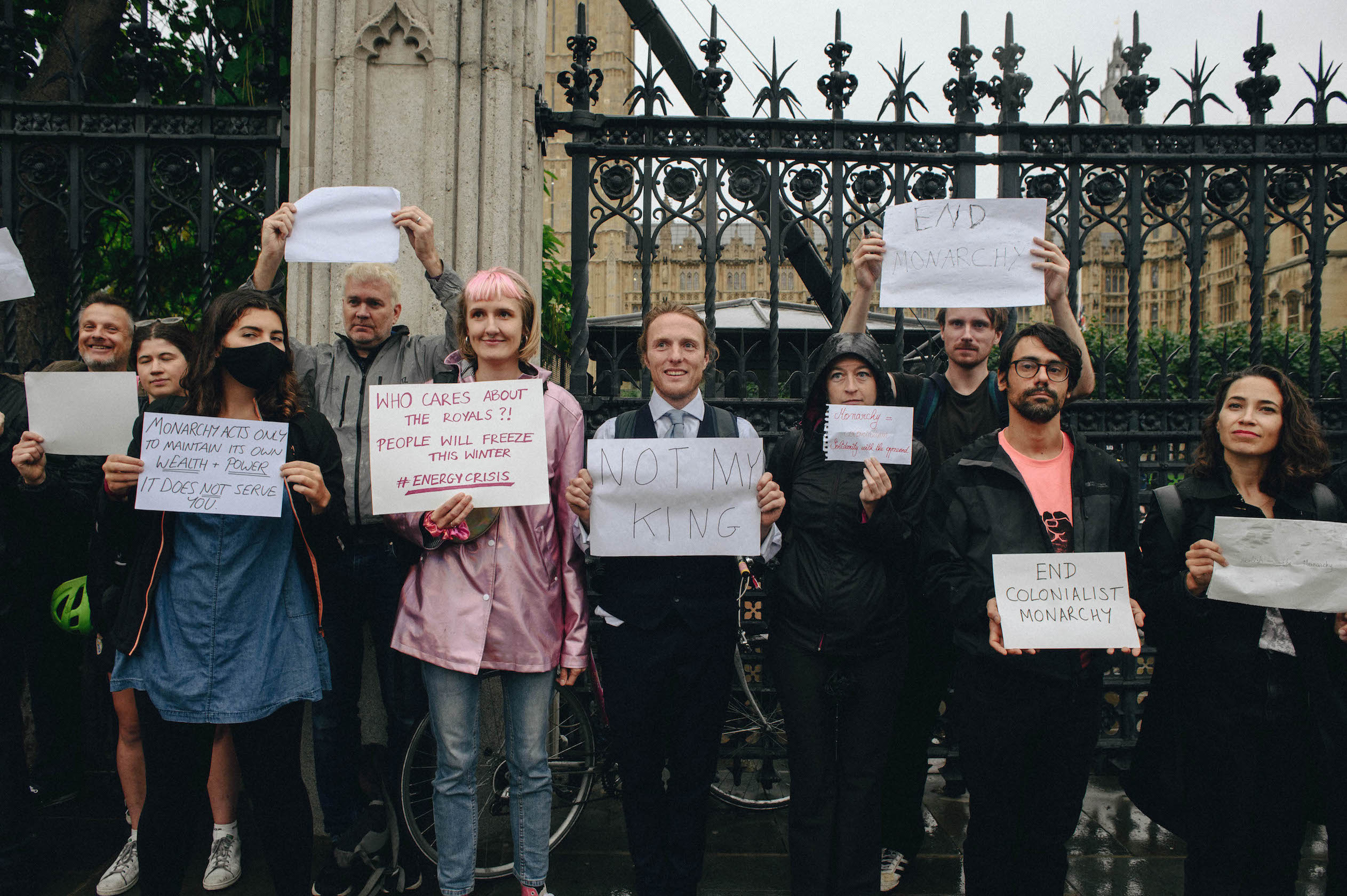 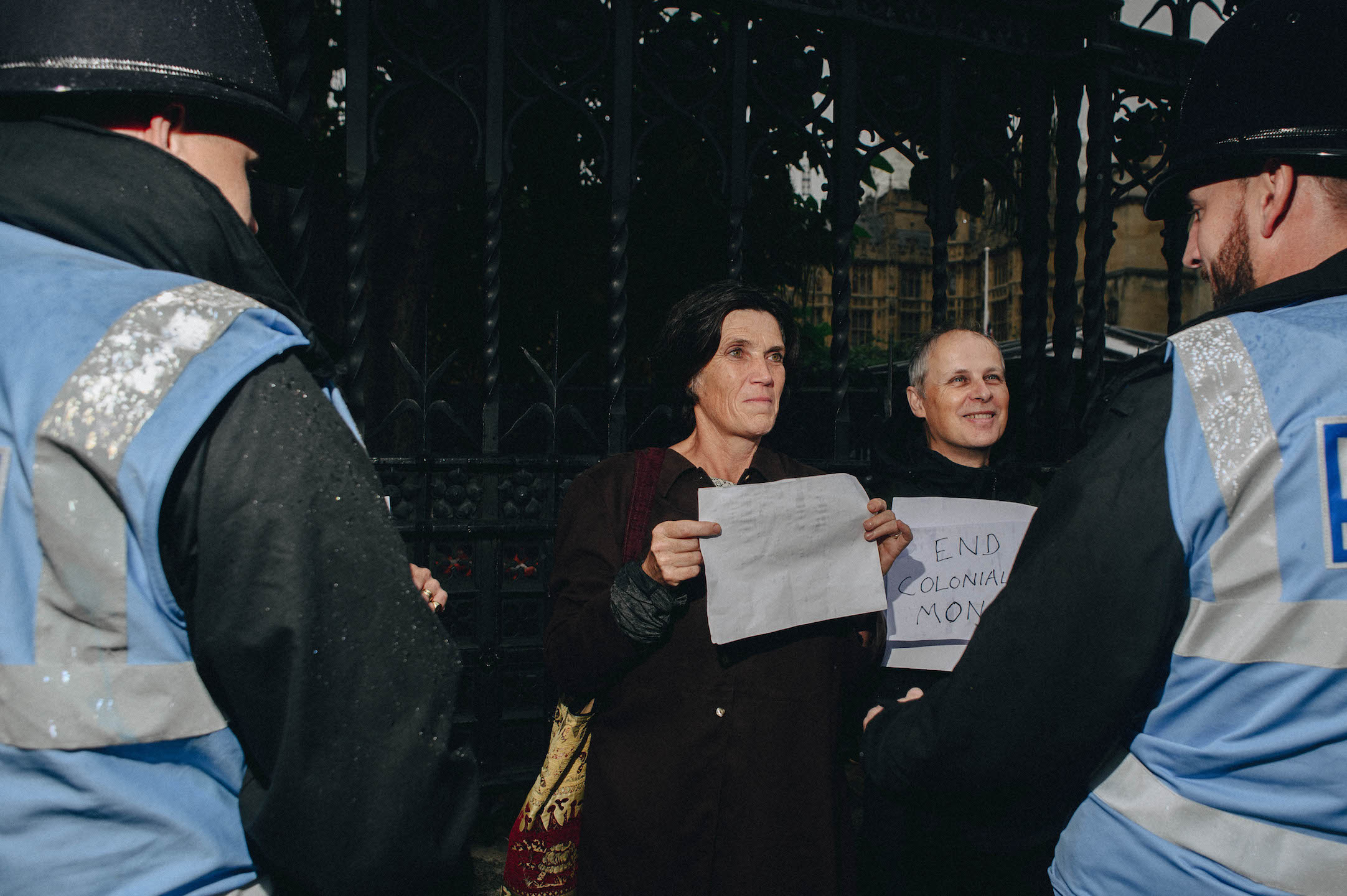 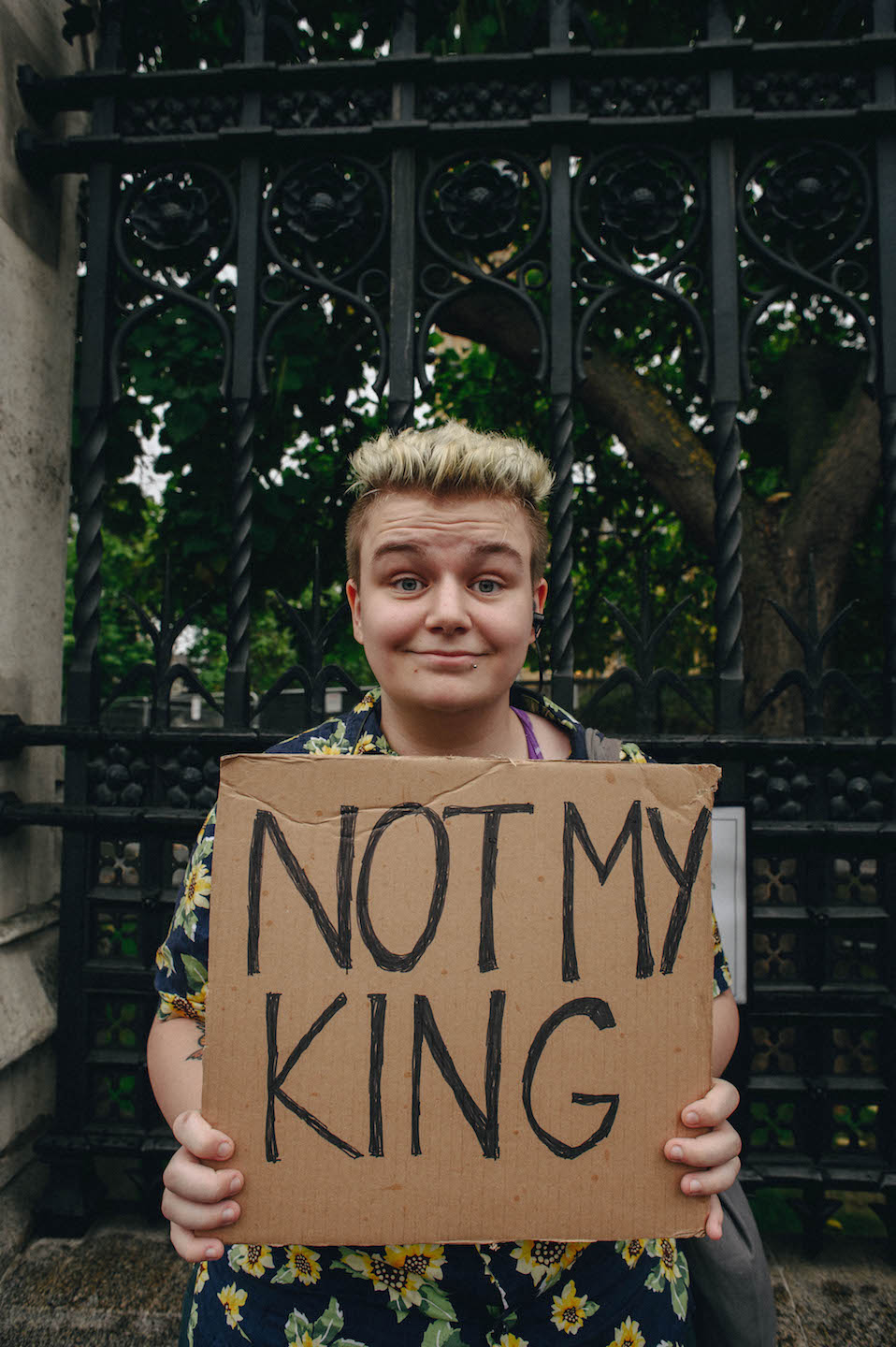 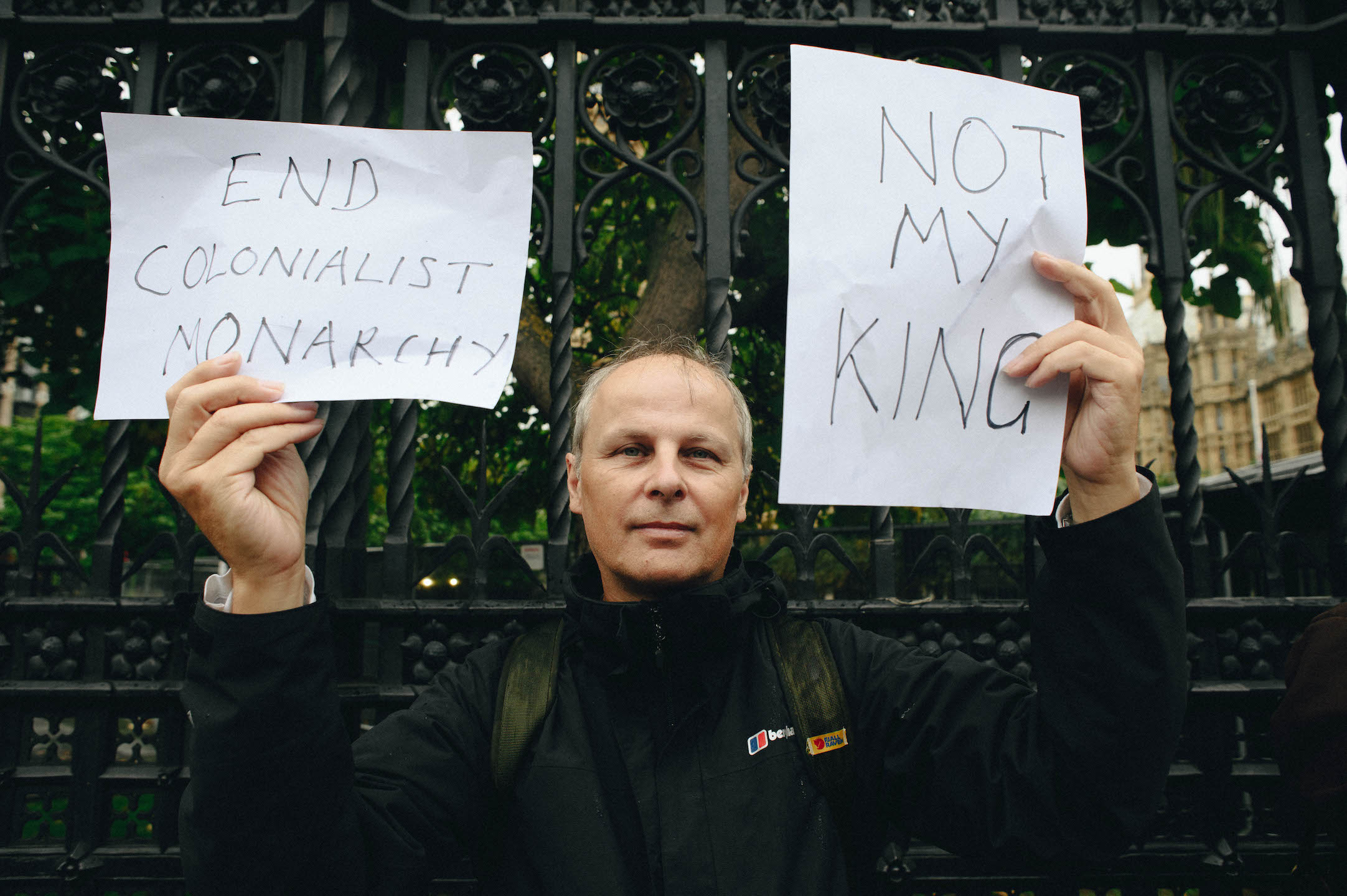 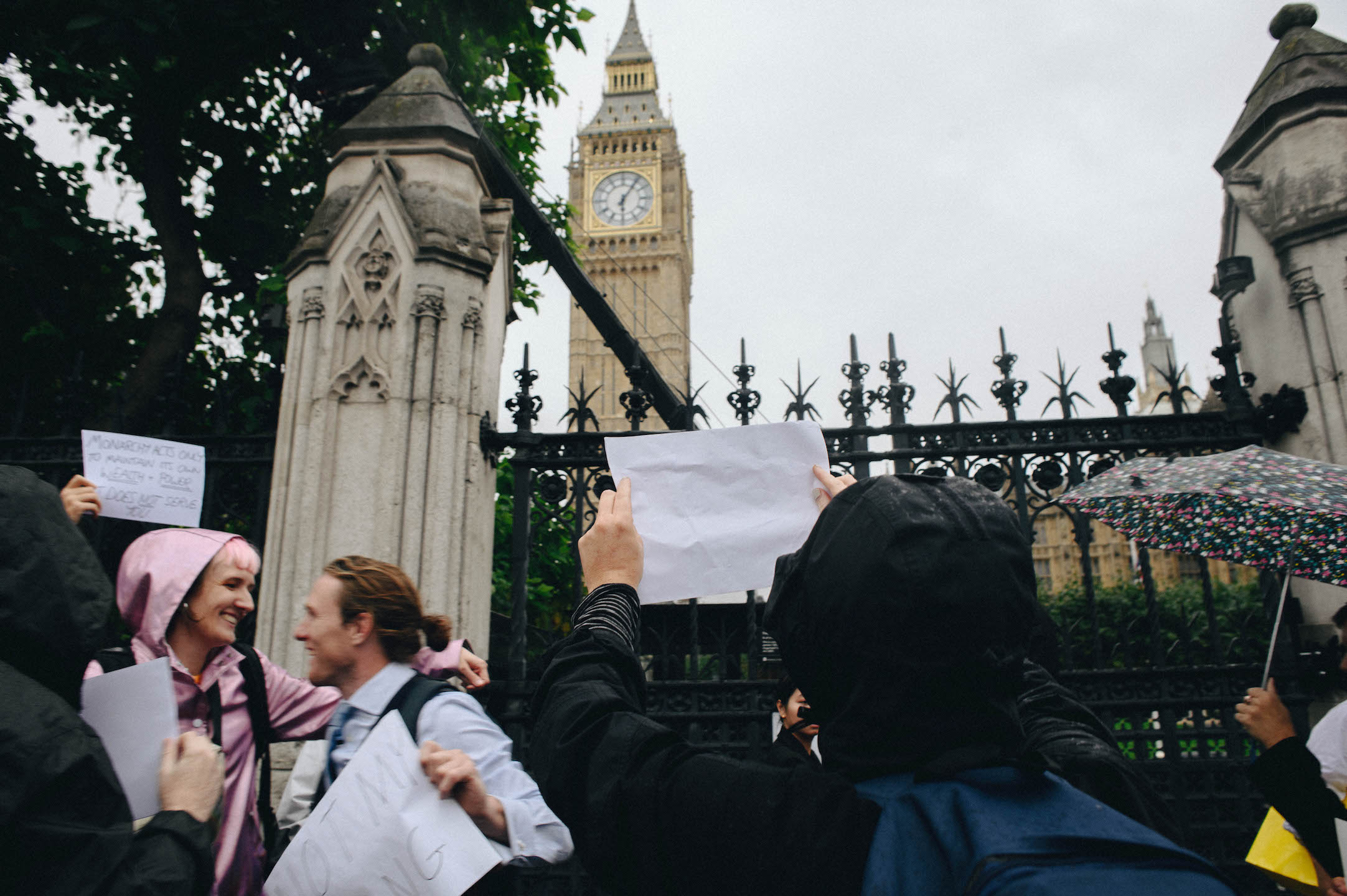 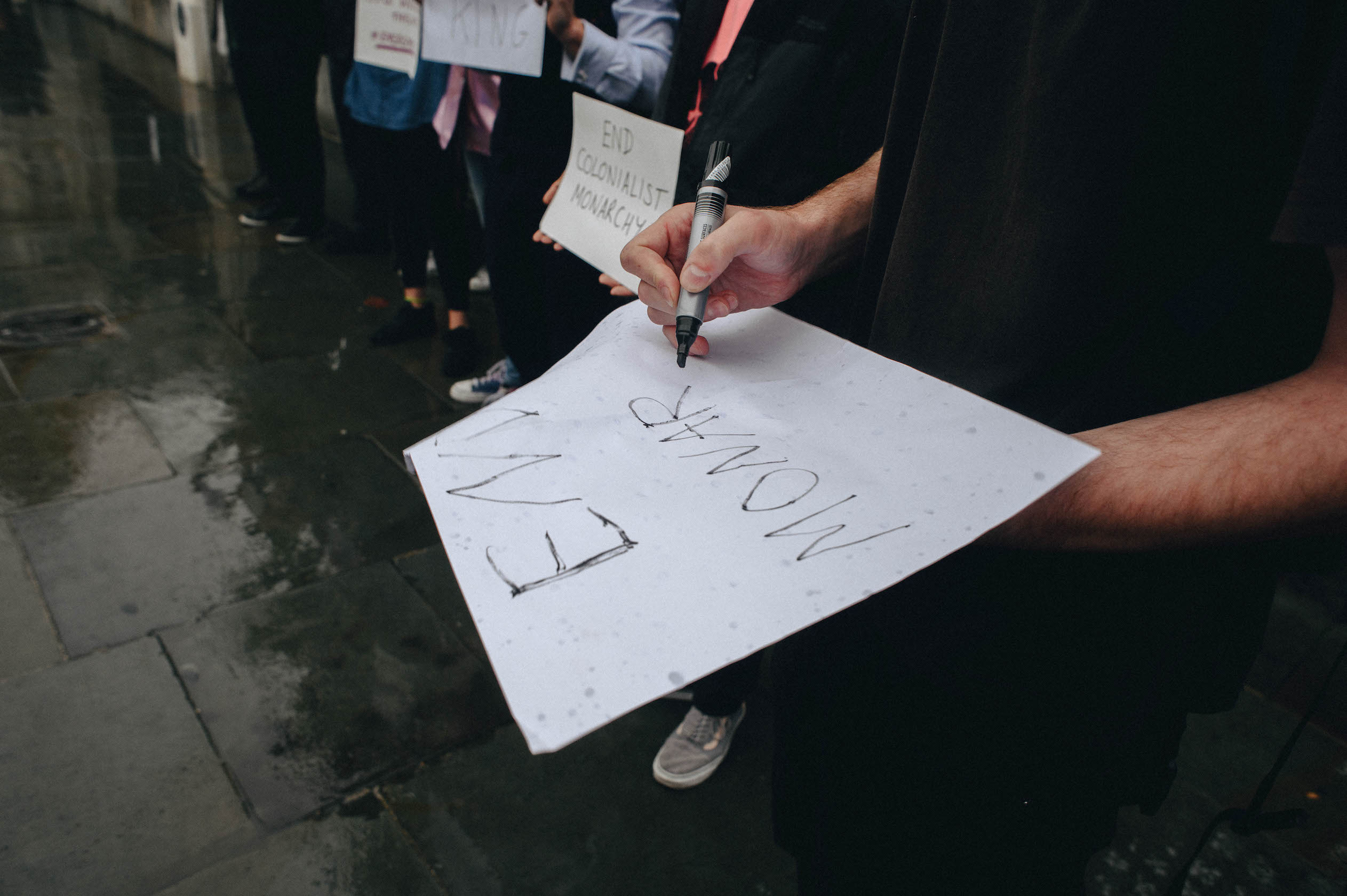 Linkedin
RELATED ARTICLES
OTHER ARTICLES
A group of young Palestinians have found temporary freedom in the act of parkour, reimagining wreckage and ruins as a series of high-octane playgrounds.
Photographer David Corio’s archive offers a glimpse inside a revolutionary era of music and nightlife.
Financial turmoil is pushing people who work in the sex industry into more dangerous and desperate situations as a means of survival.
The idea that a younger generation is abandoning work has become a popular narrative online, but it doesn’t necessarily reflect reality.
In his 2008 series, the photographer pictured himself as Angela Davis, Martin Luther King Jr., Malcolm X, and other prominent figures.
Yesterday thousands gathered outside Buckingham Palace after news of the Queen’s death broke.