News & Politics / In Pictures: Behind the scenes of Pussy Riot’s new video, ‘Chaika’ 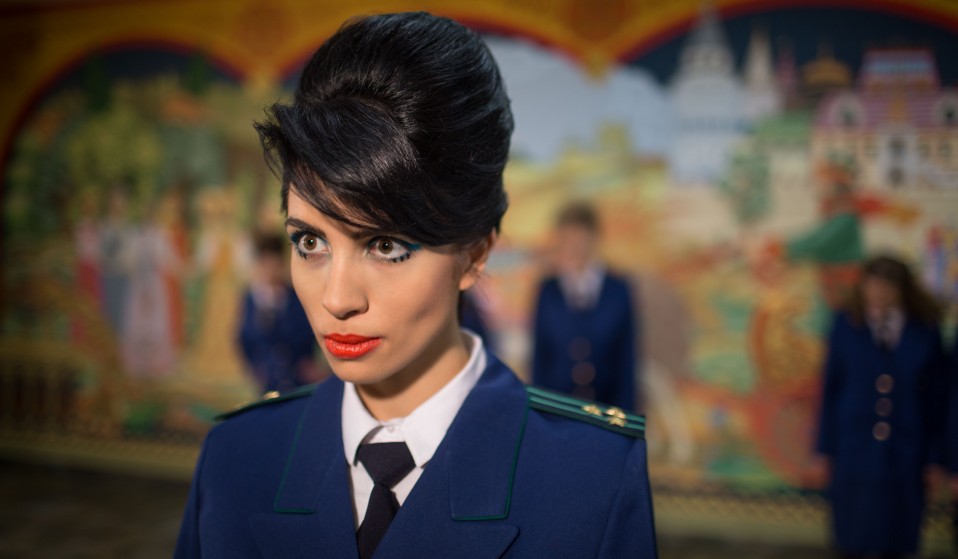 Russian radicals Pussy Riot have released a new music video for their song ‘Chaika’, poking fun at over-fed officials and the corrupt politicians who dominate Putin’s inner circle. The group’s hip hop single comes in the wake of a major corruption scandal and centres around Yurk Chaika, Russia’s Prosecutor General.

The latest video by the feminist punk collective sees lead singer Nadya Tolokonnikova dressed in the regal blue of Russia’s top prosecutor as she raps about the web of shady dealings, hypocrisy, violence and extravagance. The corruption scandal, one of many that has plagued the country in recent years, was exposed in a short documentary by anti-corruption activist Alexei Navalny.

“The idea to make a video clip occurred to her [Nadya] immediately after she saw the film,” says photojournalist Denis Sinyakov, who was backstage at the video shoot taking stills. “As of today, six million Russians have viewed the film… With this clip, Nadya hopes to continue to push this topic as so far there has been practically no reaction from the authorities.” 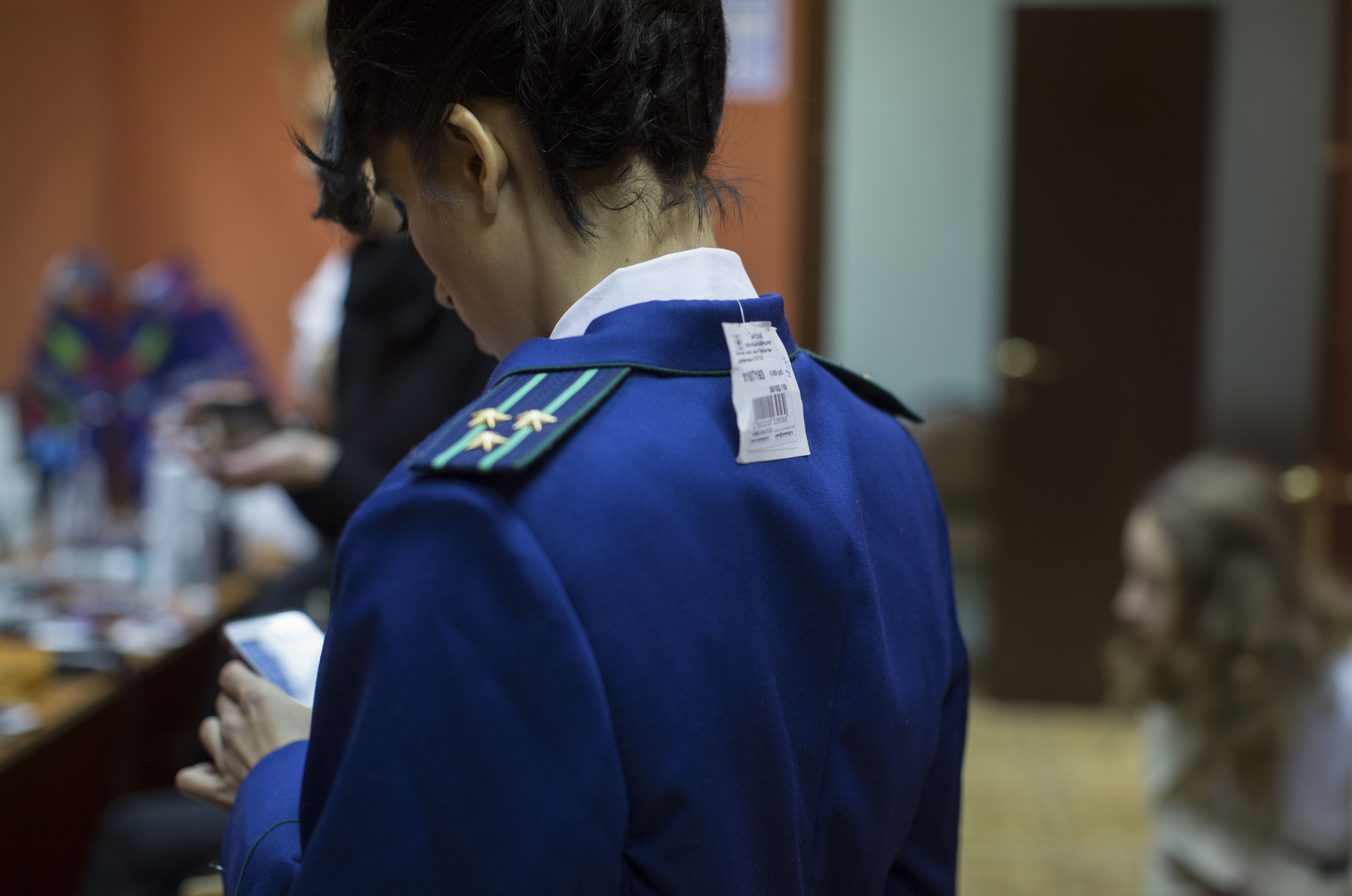 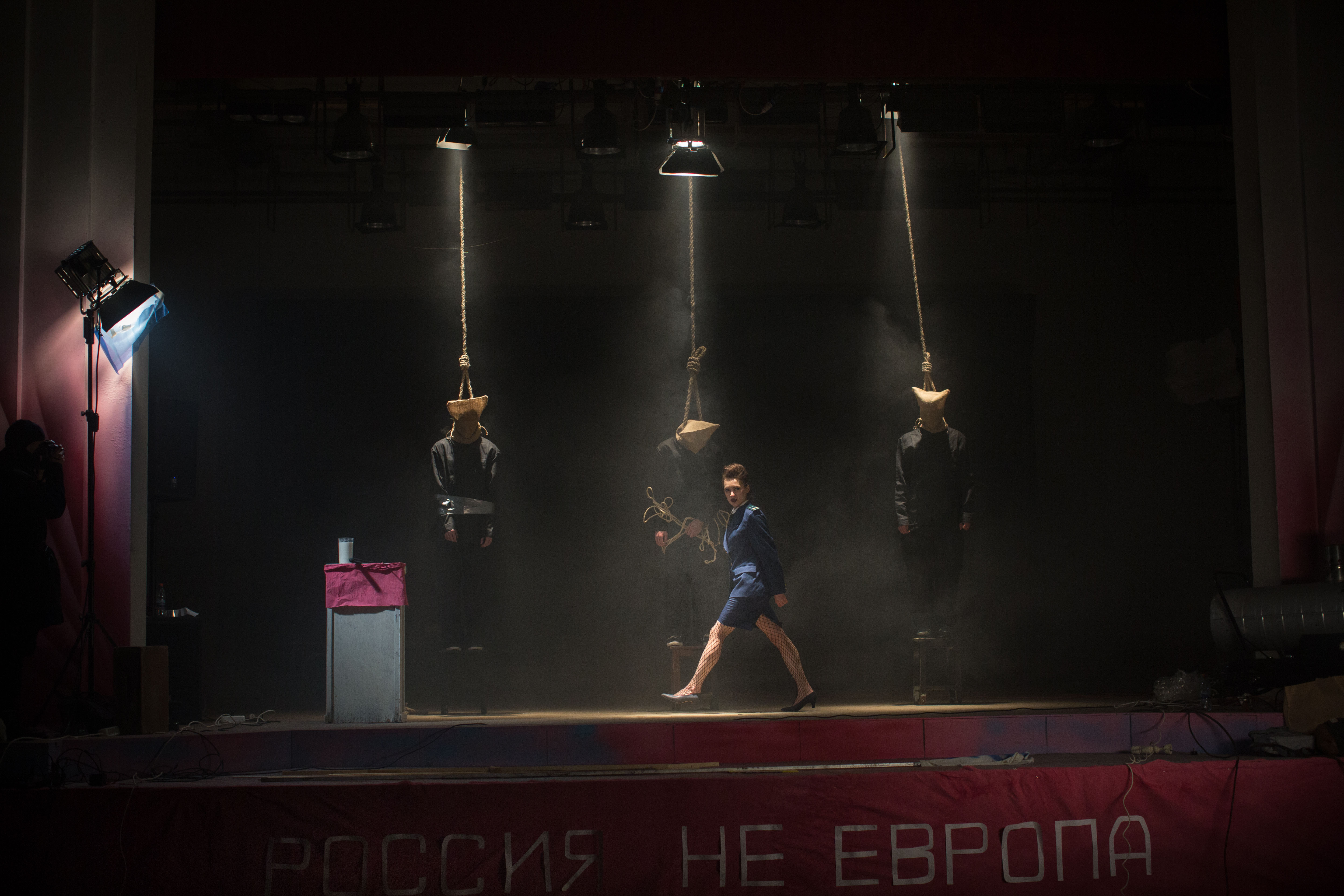 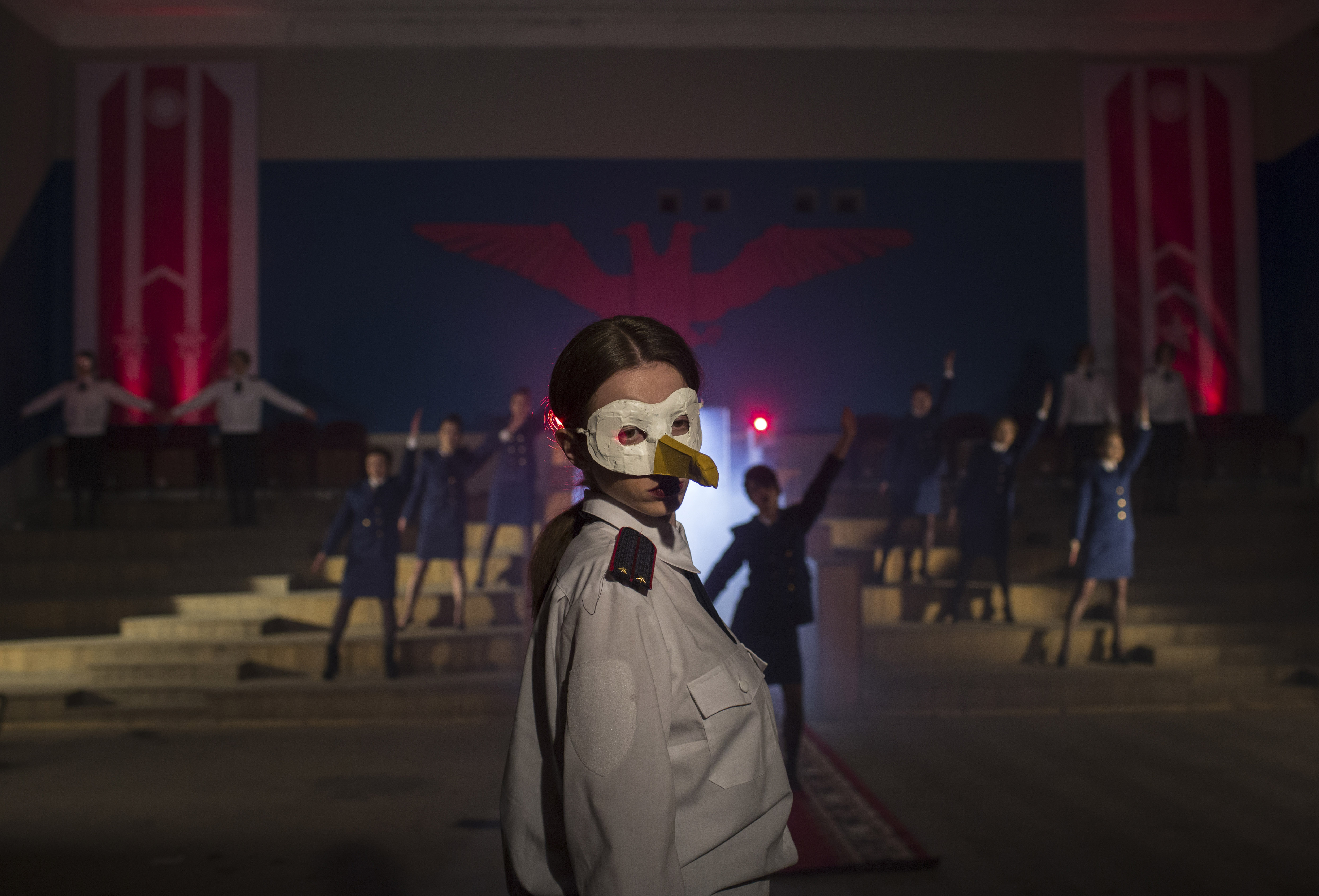 A shipyard off of Lake Baikal, a luxury hotel in Greece and a criminal gang behind the mass murder of 12 people, are all connected by Chaika and his two sons. “I’m devoted to our old Russian business traditions: first the cops will pull you in for questioning, then it’ll look like an accident, you’ll be fed to the fish,” Nadya sings in the satirical video. The song was produced with the help of TV on the Radio’s David Sitek. 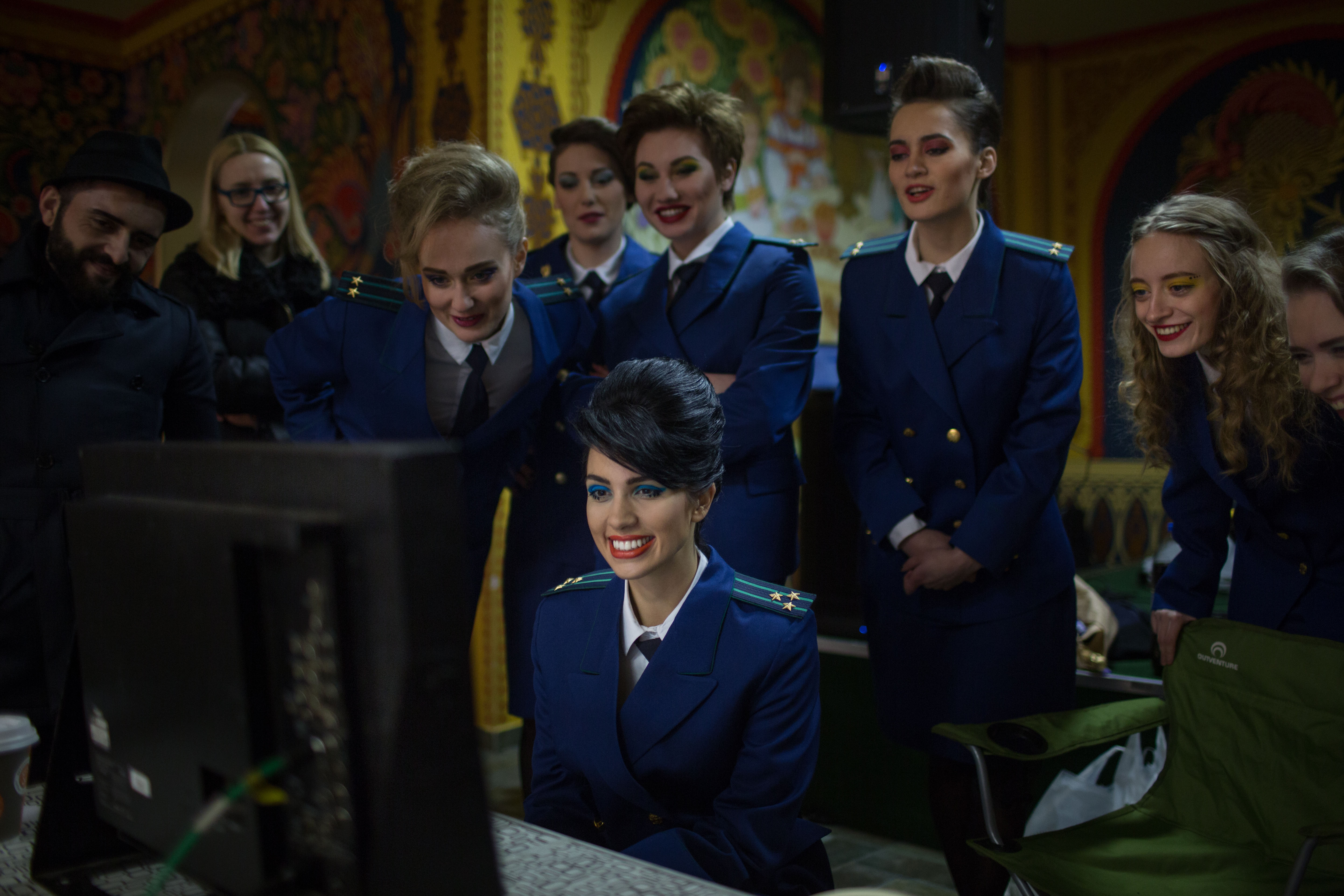 The video features Soviet-era decor, a statue of Lenin, a ridiculous portrait of Putin, grand feasts and a golden loaf of bread – a sign of lavish corruption from the old Soviet Union. The location for the shoot? “An abandoned Soviet-era recreation house in the countryside not far from Moscow, the Kremlin kitsch replica in Izmaylovo, and the building of a recently closed pre-trial detention jail,” explains Sinyakov. The band had to pretend to be part of a police convention to get access to the scaled-down Kremlin replica. 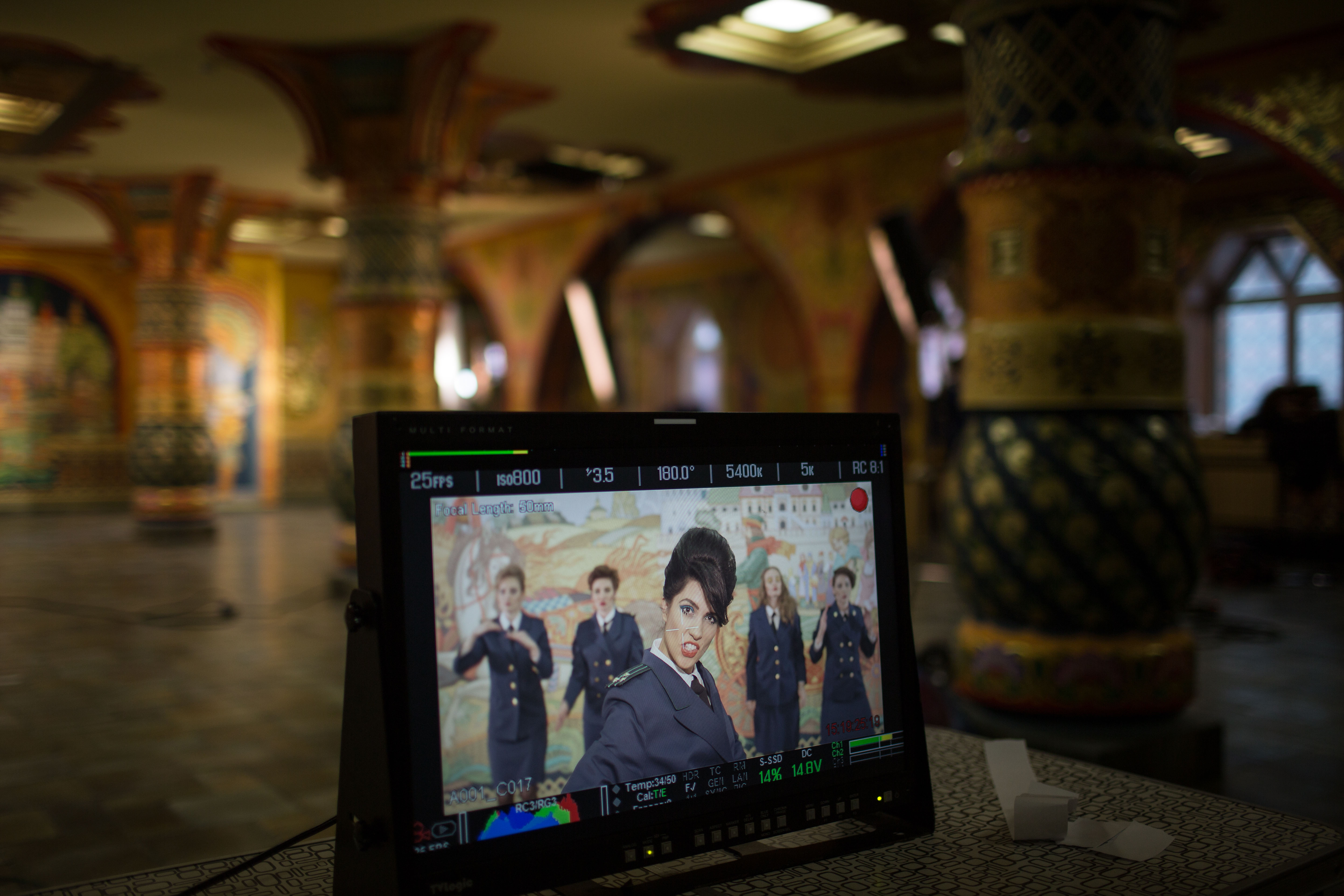 David has been working with Pussy Riot for several years, and has also been detained by the Russian government himself in relation to a story he was covering about Greenpeace. “Unfortunately, Russians do not relate the current economic problems in the country to broad scale corruption amongst the Russian bureaucracy and Putin’s policies, and always blame the US and other Western countries for all the failures,” Sinyakov says.

It was announced a few days ago that Chaika himself would be heading the investigation into the corruption charges laid against him. 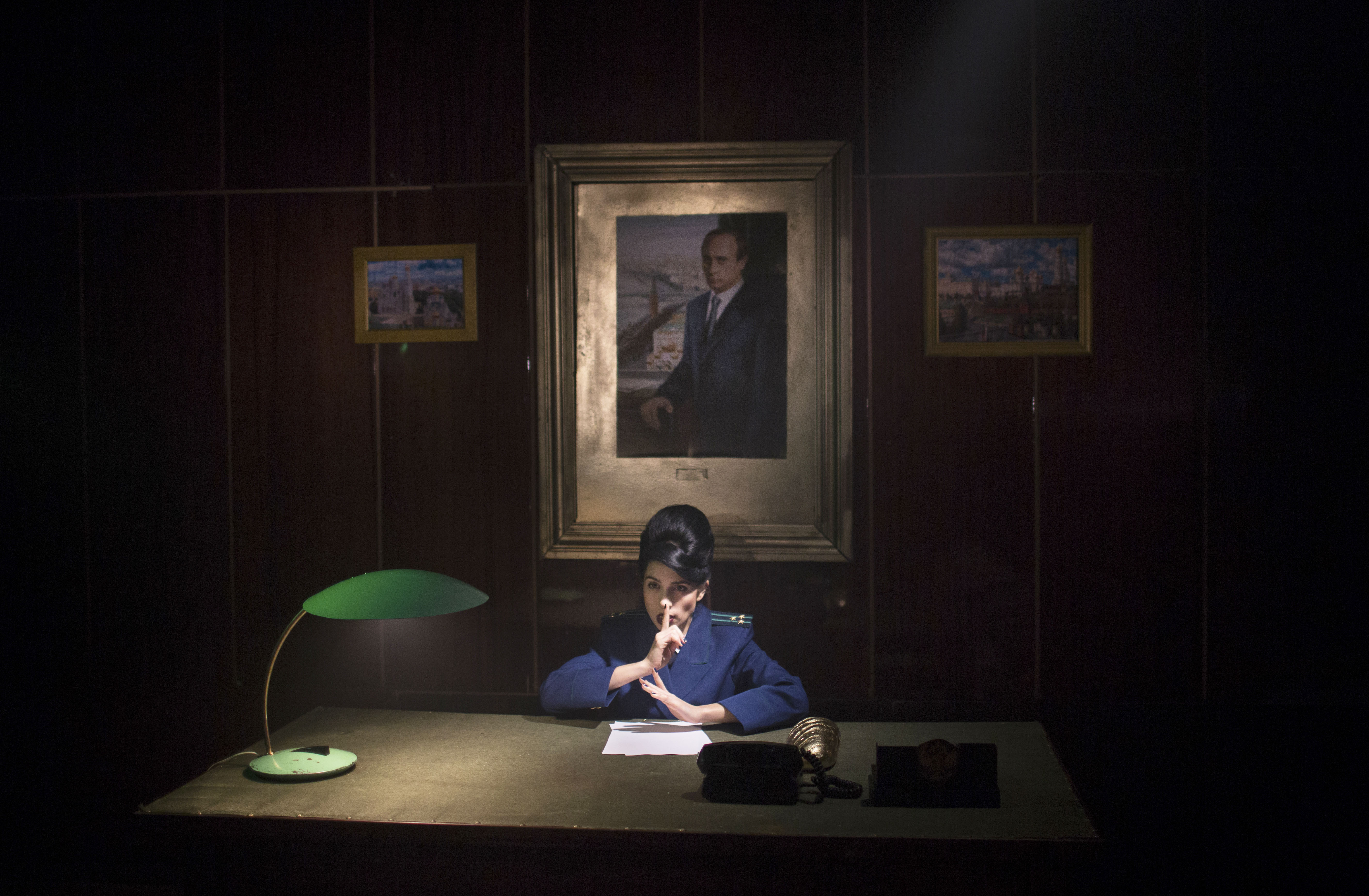 Look out for an interview with Pussy Riot’s Nadya Tolokonnikova in the forthcoming Huck 54 – The Defiance Issue, out late February.

Linkedin
RELATED ARTICLES
OTHER ARTICLES
A chance encounter with a group of reckless kids helped Russian photographer Igor Samolet rekindle his wild youth.
Russian punks Pussy Riot’s powerful new video calls out European governments for their pitiful reaction to the refugee crisis.
A new installation by British art duo The Connor Brothers sees them collaborating with Pussy Riot to channel the horrors of Calais' 'Jungle' refugee camp into a London gallery.
Russian punk activists release their first English song, with help from Nick Zimmer of the Yeah Yeah Yeahs and the legend that is Richard Hell.
Colourful resistance to Putin's far-right regime.