News & Politics / Politics For All is over, but the memeification of news isn‘t 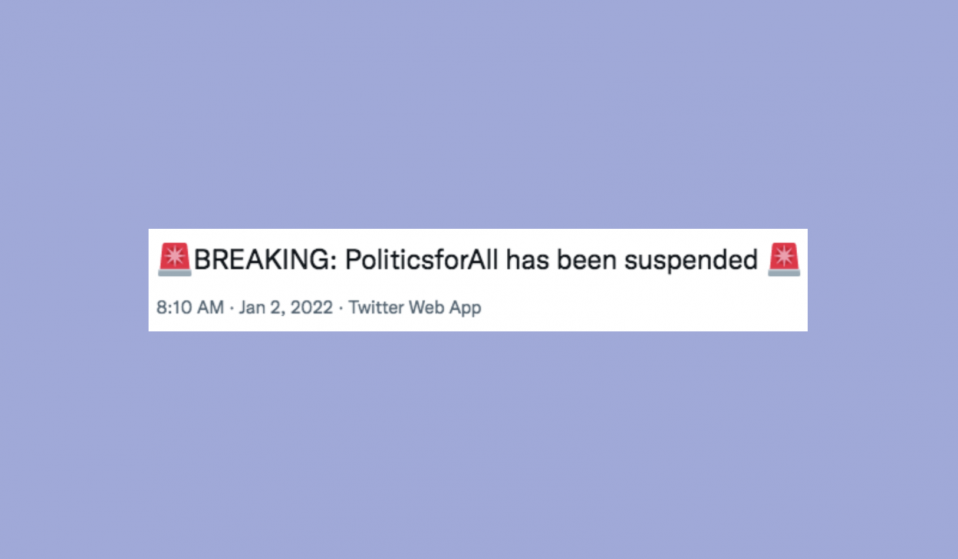 While the popular news aggregation service has been kicked off Twitter, its demise does not spell the end of digestible misinformation.

Recently, a popular news aggregation service was kicked off Twitter. But its demise does not spell the end of shareable, digestible headlines prone to spreading misinformation.

Two years ago, Warwick University student Nick Moar launched Politics For All (PFA) – a popular news aggregation service based on Twitter. The account grew rapidly as Moar – just 18 years old at the time of launch – displayed a keen understanding of what content would or would not go viral. But then, in early 2022, Twitter permanently banned PFA from its platform.

Prior to this, PFA had amassed a following of over 400,000, including MPs, government ministers and footballer Gary Neville. But it all came to a sudden end with the ban, as Twitter removed the account and its various subsidiaries: News For All, Football For All, and Moar’s personal account.

When contacted, a spokesperson for Twitter said that PFA was “permanently suspended for violating the Twitter Rules on platform manipulation and spam”. The specific behaviour that Twitter was referring to remains unknown at the time of writing. According to The Guardian, the PFA team plan to appeal the decision, although it is currently unclear as to how they plan to go about doing so. (A Twitter message to PFA, seen by The Telegraph, said the accounts “will remain suspended”.)

When active, PFA typically posted small snippets of news stories, then followed them up with a link to the original story elsewhere on the web (in a second tweet, after the first had gone viral). This modus operandi saw them taken to task by some critics for denying proper clicks and credit (and, therefore, reach and advertising revenue) to the original authors and publishers.

On the various criticisms the account has received, Dr Petros Iosifidis, a Professor of Sociology and Media Policy at City, University of London, points to “the growing concern from traditional news media that it could be taking away their audiences, but also for failing to link journalists’ articles within their viral Tweets”. For instance, Tom Peck, a political sketch writer and columnist at The Independent, outright accused PFA of engaging in “utterly shameful plagiarism”.

Politics For All, run by 19 year old Nick Moar, became very popular incredibly quickly through sensationalism, exaggeration and utterly shameless plagiarism. A thrill to see the timeless values of British journalism alive in the next generation, even if not welcome on Twitter.

According to Dr Jacob Mukherjee, lecturer in media, communication and cultural studies at Goldsmiths, University of London, the news industry is in a prolonged crisis. “Ad revenues for conventional news media outlets have plummeted, with advertisers moving their business to Google and Facebook in particular,” he says. “Younger people tend to encounter news via social media platforms or news aggregators – both of which can be seen as profiting from news content they didn’t pay to produce.”

PFA also faced accusations of spreading misinformation more than once, often by distorting stories by focusing only on the specific elements that would help it go viral, and had to retract some breaking news stories tweeted out in the heat of the moment that proved to be wrong. City councillor Chris Burden noted that “they’d regularly delete tweets, not report stories [and] change the wording on stories” after posting.

Another of the more frequent criticisms aimed at PFA was that it was not the neutral platform it claimed to be. These allegations were based on the identity of its founder, Moar, who is allegedly a Brexit-supporting conservative that currently works for right-wing magazine The Spectator. However, an investigation by Byline Times found that PFA was not generally skewed towards the right despite Moar’s personal politics, and that it had deliberately sought to integrate some balance into its coverage.

The types of stories that an account like PFA tends to share are those that evoke the strongest emotions in the reader: posts which are easy to understand and quick to summarise. In short: the kind of stories that are most likely to go viral and quickly grow the account’s audience. By selecting only the elements of a story most likely to blow up – those that are most controversial or emotionally-charged – PFA often distorted meaning, stimulating growth of their platform at the expense of accuracy. Peck said that he believed the account “became very popular incredibly quickly through sensationalism [and] exaggeration”.

Of course, turning the news into easily digestible and shareable social media posts isn’t necessarily a bad thing. Fast-spreading news can be useful for disseminating important information as widely and as quickly as possible – which is particularly useful in an emergency and for social-justice campaigners, where speed may be a life and death issue. Memefied news also opens up opportunities for cheaper alternative media (for which cost can be a barrier to market entry) and appears more likely to get young people interested in current affairs. For example, Statista found that the internet is the preferred news source for around 89 per cent of consumers between 16 and 24 years old, compared to 50 per cent of people aged over 65, who overwhelmingly prefer television.

“News in this environment has to be snappy to get attention – some research suggests that people spend, on average, one 80th as long reading a digital news story as the print equivalent,” Mukherjee says. “Accounts like PFA work well because they repackage existing news content, highlighting those aspects of stories that are likely to generate reactions and shares.”

However, memes notoriously do not leave much room for nuance, even if they are effective when it comes to communicating short, pithy messages based on shared points of reference. This lack of context can create limited understanding of complex issues, leading to the rapid spread of misinformation, especially when shared on social media platforms.

More often than not, these kinds of accounts are not run by trained journalists, and lack the myriad resources of a newsroom – such as fact-checkers and sub-editors. Neither of these are necessarily problems in themselves, but can mean that mistakes are more likely to make it to print – as it were – and that bias can regularly go unchecked. This is perhaps especially true for Instagram posts, where aesthetics and shareability may take precedence over accuracy. Byline Times noted that PFA’s fact-checking and moderation systems seemed to be “rudimentary” at best.

In response to critics, Twitter has implemented certain measures in an attempt to stop this from happening, such as suggesting that users may want to read an article before retweeting it. But these measures arguably do not go far enough. The majority of social media users do not have the time or inclination to click through to the full story, nor do they wish to spend time fact-checking every piece of information they receive. Similarly, Twitter itself has neither the time nor the ability, one suspects, to fact-check everything on its platform.

Further restrictions on content would surely lead to accusations of censorship and bias from the platform, while an outright ban on news seems impractical. Indeed, there are benefits to the PFA model – potentially liberating politics from the legacy publishers and owners, and opening up a national conversation that was once solely the domain of a few journalists at a select number of national newspapers.

Mukherjee suggests that “the fact we don’t know the reasons for PFA being deleted, along with the fact there is no proper appeal process against suspension or deletion, underlines the reality that we have given vast unaccountable private social media corporations the power to regulate and control our public sphere”. He adds: “The tech and social media giants must be taxed, and the revenues invested in grassroots news production, including local public media.”

Iosifidis sees things a little differently. “On the broader issue of whether social media platforms should be regulated, it’s a difficult one to address, not least because any restrictions on media may impact on freedom of speech, which is a UN right.” He notes that calls for regulating social media “have gained momentum in recent years” and that the broadcasting regulator Ofcom will soon publish its ‘online harms’ legislation, which might tell us more.

There is no one-size-fits-all answer here. Twitter’s dream of a fully democratised public sphere clearly isn’t working. But it’s also very hard to know where to draw the line, especially given the potential benefits of social media for escaping the neoliberal hellscape that the commodification of news has created, or threatens to create, within some of our more traditional news sources.

This research is part of the UK component of the Media Influence Matrix, set up to investigate the influence of shifts in policy, funding, and technology on contemporary journalism, funded by the Joseph Rowntree Charitable Trust. The final report was published in December 2021.

Linkedin
RELATED ARTICLES
OTHER ARTICLES
Over the weekend, London locals came together to resist a pre-planned police raid targeting delivery drivers.
Following the release of his newly republished 1991 book, Redheads, the American photographer reflects on his celebration of ginger people and their magnetic power.
The revered showbiz chronicler recalls his journalistic beginnings, documenting subcultural scraps in the ’80s.
A group of Ukrainians living in Poland are helping Ukraine withstand Russia’s brutal invasion by buying supplies and shipping them directly to the war’s frontlines.
Following the release of his latest album God Don’t Make Mistakes, the rapper talks horror villains, police brutality and being unafraid to show his vulnerable side.
Our new magazine is here, starring the inimitable Mitski. Order your copy now and join us on a trip around the world.