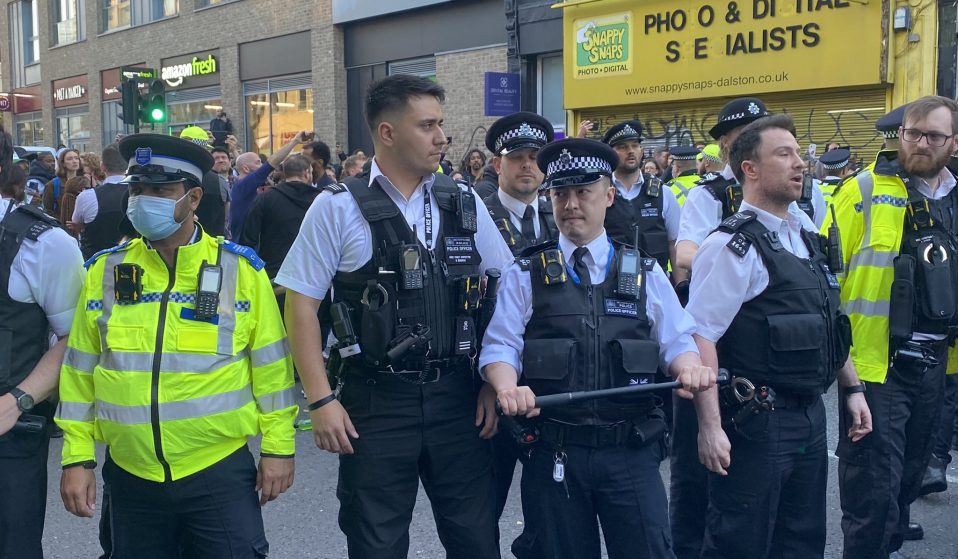 Over the weekend, London locals came together to resist a pre-planned police raid targeting delivery drivers.

Over the weekend, London locals came together to resist a pre-planned police raid targeting delivery drivers.

As Jack Aitchinson* and friends left Dalston’s Gillett Square at around 7.30 pm on Saturday (14 May) night they were greeted by a strange scene. Traffic along the usually busy Kingsland road was at a standstill. “Buses were stopped and there were a good few police vans and cars,” Jack told Huck. “The whole street was chocka and there were loads of people standing around. This guy in an orange shirt told us the police were raiding.”

A few minutes later the man in the orange shirt would be dragged from under a police van and repeatedly hit in the face by officers before being arrested. He was one of nine arrested for a range of offences, including violent disorder, assaulting an emergency worker and obstruction. Eight of those arrested would go on to be charged and bailed for later appearances in court. Footage of these violent scenes soon flooded social media. In several videos, police officers can be seen indiscriminately hitting members of the crowd which had gathered with batons. Others can be seen being shoved and pushed over. Those on the ground report large numbers of injuries including a mild concussion, bruises and sprains.

Shocking footage of the police repeatedly punching a protester in the head after an immigration raid in #Dalston this evening. How do the @metpoliceuk justify this awful violence? pic.twitter.com/B4eMAeYRVf

“I got there around 6 or 6:30 [pm] after receiving information about a raid taking place on Ashwin street,” Zarah*, who was one of the first on the scene, told Huck. The street, a quiet side road situated just behind the busy McDonalds on Kingsland road, is a regular waiting spot for drivers waiting to pick up deliveries from the restaurant. “When we arrived there were just four of us [and] around 10 police officers and the drivers. We started to give drivers know your rights cards.”

It was at this point, Zarah says, that things started to escalate: “The police got frustrated and started to barricade us in. One of my friends was dragged into the back of a police van.” Within a short period of time, the call went out for support and a crowd was amassed. “More and more police vans showed up, with police showing lots of aggression and brute force to anyone who came too close to them.”

“[The police] said they were intimidated and just trying to protect their colleagues when I know for a fact it started off with just four of us peacefully giving out information,” Zarah recounts. “The police escalated it. The more violent they got, the more angry we got, the more police officers they called.” Zara says the police showed no attempt at de-escalation. “Once they had made their arrests, they got back in their van and pushed us out, physically punching and pushing those standing on the street to move the vans through.”

Police action in Dalston against deliver drivers has taken a brutal turn. pic.twitter.com/N3rlc5iSx2

Jack reports seeing at least two people on bikes pushed off by police officers. Others on the ground reported seeing a police car drive off with someone partially trapped underneath. Many of those in attendance required first aid assistance after the scene had calmed down around 8pm. One of those arrested was taken to hospital for a suspected concussion. “It was literally one of the most abhorrent things I’ve ever seen,” Jack told Huck.

The Metropolitan Police claim that nine officers were assaulted and one racially abused during the incident, but were unable to answer any questions from Huck over details of any injuries suffered. They state that they have referred footage of protestors being punched for independent review.

Drivers who wait in the area, many of whom are members of the Independent Workers Union of Great Britain (IWGB), are regularly subject to police action.

In a statement released in the aftermath, the union condemned the actions of the police. “The IWGB condemns the actions and behaviour of the Met Police during the Ashwin Street raid on Saturday evening. After targeting couriers for immigration checks under the pretence of checking insurance documents, video footage shows police officers indiscriminately attacking members of the public with batons and repeatedly punching one person in the head whilst they are on the ground.”

The statement went on to detail the history of harassment that drivers in the area have faced. “This is not the first time we have seen police specifically targeting BAME couriers in this area, and checking their immigration status under the guise of checking insurance or responding to claims of anti-social behaviour and vehicle theft. Ashwin Street is one of the top three most-policed areas in the ward. Harassment from police is an issue of workplace safety and dignity, and just like everybody else, food delivery workers have a right to feel safe whilst doing their jobs.”

The Metropolitan Police stated: “We are aware of some reporting which suggests that this operation was to target immigration based offences. This is not the case. The operation was to target e-scooters and moped enabled crime following concerns of anti-social behaviour reported by the local community During the course of the operation, officers did detain a man who was wanted for immigration offences. The man made off from police. Enquiries are ongoing.”

Mary Atkinson, campaigns officer at the Joint Council for the Welfare of Immigrants told Huck: “Over the weekend, Dalston showed us what solidarity looks like: locals coming together to stand up for members of their community. Without this resistance, these workers could have been locked up for months, away from their loved ones, homes and sound legal advice.”

Cops out of Dalston. We don’t want you. We don’t need you.@mayorofhackney @HackneyAbbott what do you have to say about violent immigration raids of @Deliveroo riders in Dalston. pic.twitter.com/OikcJZOBkp

The actions of the police have been widely condemned, including by local Green Party councillor, Zoe Garbett, who was present on the scene. In a statement released after, she said: “I witnessed the police forcefully pushing people and throwing them to the ground or out the way and using batons to hit people. It felt incredibly unsafe and threatening particularly with the police charging into the crowd and at individuals. There was a lot of disruption and distress caused for residents living, shopping and working in the area.”

On Saturday’s resistance, a spokesperson for Netpol told Huck, “It is clear the police were wholly unprepared for popular anger about the invasive presence of immigration enforcement teams in Dalston. They then failed completely to de-escalate a tense situation by resorting to the use of force.

“Our worry is that police may accompany future attempted immigration raids in even greater numbers, swamping diverse racialised and working-class communities to try to prevent resistance. We are also alarmed by the seriousness of charges for those arrested this weekend. Like in Bristol last year, these seem intended to send an excessive message that dissenting voices will face a crackdown”.

Linkedin
OTHER ARTICLES
After blocking the Scottish government’s gender recognition reform bill, Westminster is now devising further changes to the law to make it harder for trans people to self-identify.
Tristan O’Neill’s shots of dancers caught in moments of reverie at the height of rave’s golden age are a testament to the UK’s legendary club culture.
Since 2007, Gideon Mendel has made 20 trips to document floods in 13 countries. The result is an alarming record of what has already been lost to the climate emergency.
Filmmaker Laura Poitras discusses her new documentary which traces the remarkable life of the artist-activist and the impact of her battle against the US opioid crisis.
Activists and campaigners are fighting back against new laws that would seriously undermine the ability to take industrial action, calling it an attack on fundamental workers' rights.
Photographer Sean Maung reflects on documenting a small town in Pennsylvania afflicted by high levels of unemployment, poverty, violence, crime, and addiction.