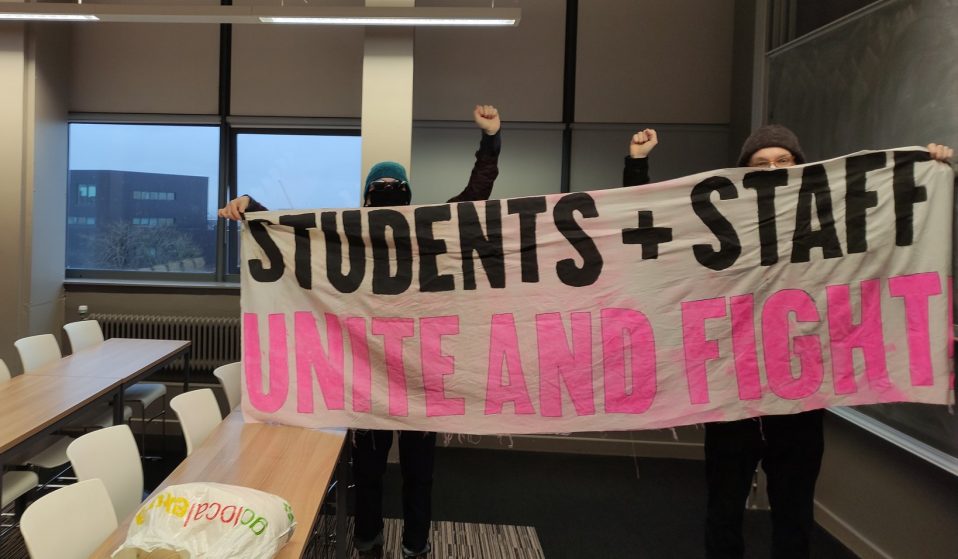 LGBTQ+ students are keeping the spirit of the original Pride alive by fighting for liberation for everyone, not just their community.

LGBTQ+ students from across the UK are keeping the spirit of the original Pride alive by fighting for liberation for everyone, not just their community, reports Zac Larkham.

‘The first Pride was a riot’ is a phrase often heard during Pride month. In 1969, trans women of colour Marsha P. Johnson and Sylvia Rivera and others led a spontaneous protest at the Stonewall Inn in New York. Prompted by a police raid on the queer venue, the proceeding riot is now remembered as the first Pride, and eventually led to the formation of the Gay Liberation Front (GLF) in the city. As well as fighting for queer liberation, the group also fought in solidarity with other oppressed communities, denouncing racism and capitalism.

Today, Pride is a far cry from the angry rebellion that night in 1960s New York. Every June, like clockwork, corporations including arms manufacturers, oil companies and social media giants fall over themselves to show their ‘support’ for the LGBTQ+ community, in a display many disparagingly refer to as ‘Rainbow Capitalism’ or ‘pinkwashing’.

Thankfully, queer students across the UK are keeping the spirit of the original Pride alive and well; fighting for liberation for everyone, not just their community. From occupations, community organising and creation of spaces centred on radical care, queer-led student groups are at the forefront of campaigns fighting for change.

At Sheffield universities earlier this year, an impressive array of enormous banners draped from buildings occupied by students in solidarity with the University and Colleges Union (UCU) strike. The group responsible was Sheffield Action Group, or ‘SHAG’. According to their Instagram, SHAG is a “Queer student led, cross-university direct action collective who fight for a fairer university & stand in solidarity with students and workers”. 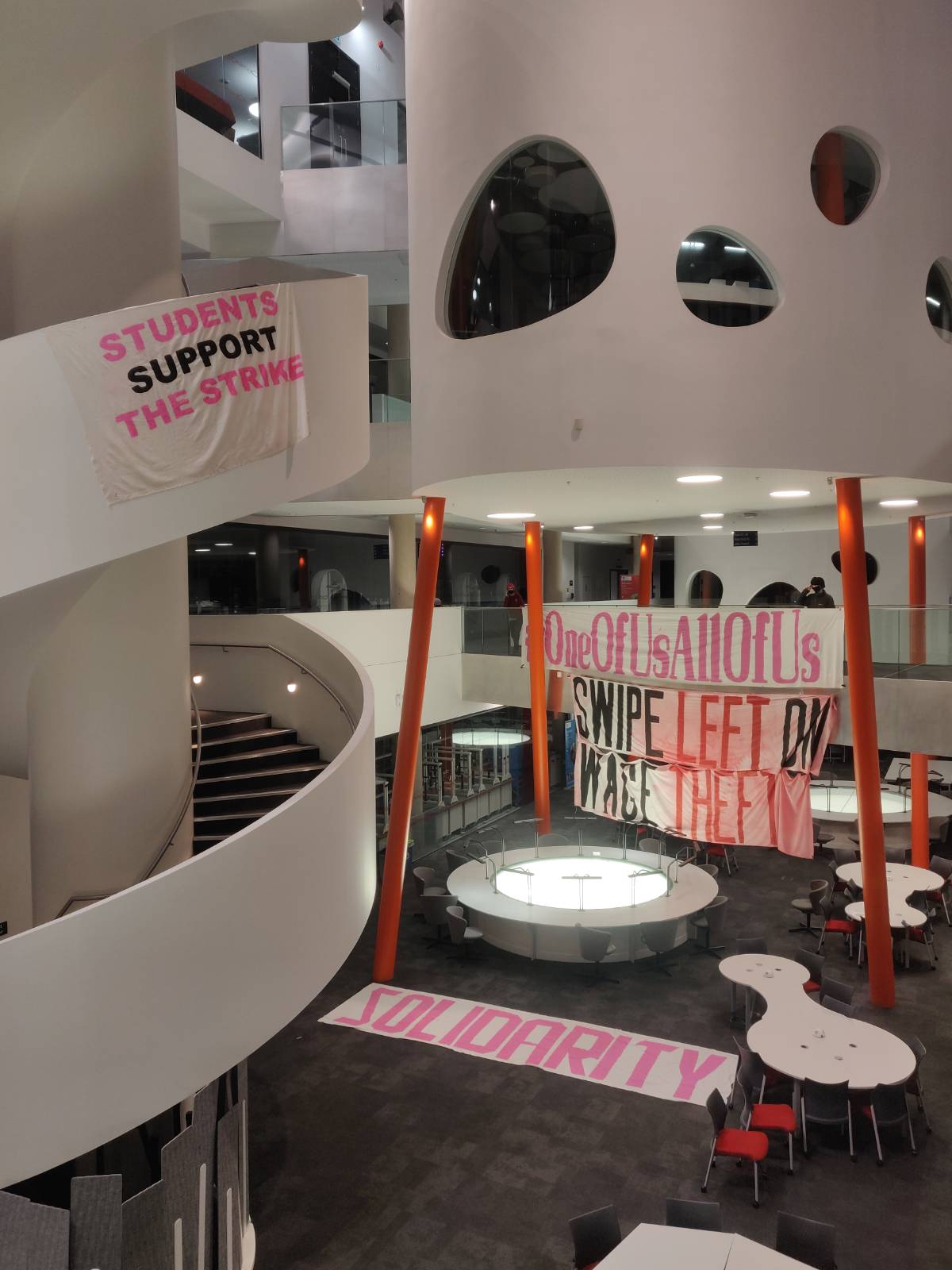 SHAG have been trying to build a healthy group culture by pushing back against the exclusion queer people can sometimes feel in activist spaces. “To be a good left wing movement you need to be inclusive, partly out of political principle, but also practically it means you can involve people who otherwise would be excluded from political spaces” says Alice, a transgender student and SHAG activist. “A group that demonstrates empathy is a litmus test for it having good politics and a good culture of care. Taking that to other issues and oppressed groups makes you better at politics.”

Across strike action in February and March, SHAG staged seven occupations in solidarity with the UCU, at one point occupying five University of Sheffield buildings simultaneously. This is  believed to be the most university buildings occupied together at a single university in the UK since the 1990s.

Alice says SHAG’s militancy isn’t an accident, rather, it’s a direct result of having queer people so active in the group. “Queerness isn’t the same as LGBTness,” she says. “Queer is a reclaimed slur and it has politics directly implied and embedded. Queer politics are inherently radical and anti-corporate Pride.”

She continues: “Our politics are naturally geared towards being radical, because we’re forced to as a point of survival. The political action we do is more likely to be militant because that is what is effective. We don’t have the luxury of ‘reading group style’ politics.”

Throughout the occupations security tried to identify the students, including by stealing prescription medication, but this proved difficult. Out of the students who were involved, SHAG estimate that over two thirds are transgender, non-binary or fall somewhere under the gender-queer umbrella. Occupiers started making memes about it, joking that security couldn’t identify them because they were all trying out new names and pronouns.

Queer-led groups see solidarity with other communities and struggles as an important part of their radical queerness. At the University of Nottingham, queer students have also been at the forefront of organising on their campus. As well as supporting striking staff they also had demands around the university’s relationship with arms company BAE Systems and the surveillance of international students. On 28 March, around 50 students from Nottingham Student Solidarity group occupied management’s offices for almost two weeks.

“We’re definitely queer-led’ says Ash, one of the occupiers, ‘the way we did stuff was queer, we’re trying to do something radical. The fact that we were occupying and being ourselves in a way where you weren’t having a filter or anything […] Queer is radical!”

Each of the issues they were agitating around focused on workers’ rights or solidarity with international causes. “For me solidarity is almost like having a family around you because these people are standing with you and you know they’re gonna do everything to help you and what you care about” Ash explains, “like with the miners’ strike, queer people came out and supported it – it was an act of solidarity that was eventually reciprocated by the miners. That’s why you need solidarity.”

Despite the strikes ending, action instead moving to concentrate on a marking boycott, the students who stood with striking staff are keeping their groups alive. The community, friendship and solidarity they fostered between each other is something that bonded them together. “We do still look after each other,” says Ash “The friends I have now are in the Student Solidarity group.”

In Manchester, Trans Rise Up (TRU) are part of a network of antifascist and trans rights groups who’ve been setting up mutual aid groups, protests and counter protests against the increasing presence transphobes in the city. Students and young people make up the majority of the group and do a lot of the day to day organising. In November 2021, they organised a protest as a response to the BBC running a transphobic article which claimed that cisgender lesbian women were being “pressured” into having sex with trans women. Since then, they started getting more organised, running a counter-demo against Women’s Place UK and organising a conversion therapy protest. It was widely believed to be the largest LGBTQ+ protest in Manchester since Section 28.

A spokesperson from Trans Rise up, who asked to remain anonymous for their safety, explained the crossover between transphobes and fascists. “Tommy Robinson had a guy on stage wearing an ‘adult human female’ t-shirt  recently in Telford,” they say. “The fascists openly align themselves with TERFs and are coming to our protests and beating us up for being trans.”

To protect each other from that, a big part of their organising is what they call ‘community care’. “The state is clearly making trans safety the least of its priorities at the moment,” they say. Instead of protesting and demanding the government intervene to protect them, they are setting up mutual aid networks to support themselves. They are organising their community in Manchester to do things from cooking meals for each other and peer-to-peer support to providing shelter for others who’ve been made homeless, something they say ‘is always happening to someone or other’ for a range of reasons.

I cannot stress enough that TERFs are fascist adjacent if not full blown. They are not the ordinary people who have questions or don’t understand. They are a becoming a well developed, organised hate group that has been radicalised online.

This care work is intergenerational and involves queer elders as well as 20 year olds. “We’ve had a lot of assaults at protests so being able to hang out with older trans people who have their own houses and families and inviting you round for a cup of tea after a traumatic protest is really really comforting,” TRU explains. Working with people of all ages has created a strong network of activists in Manchester that has changed what can otherwise often be an atomised LGBTQ+ community to a connected, supportive one.

Care is a common theme across these groups. In a community that often experiences violence, it’s something these groups all recognise a need for. For the Nottingham students, the occupation was more than a protest: it was a place they created for queer students to live with and care for each other side by side. They appointed welfare officers and held regular group check-ins to talk about how each of them were doing. Each night had socials ranging from poetry readings to using management’s top of the range projector and screening Brokeback Mountain. “I’ve never had such a safe space,” Ash says. “It became a community because we all really looked after each other.”

Cultures of care have made these spaces accessible and safe for queer students which has allowed more activists to feel comfortable in expressing their sexuality and gender identity. Ash feels organising in a queer-led group means that “there’s an extra focus on being able to be yourself in a way that you haven’t felt you could do before. Even though you’re part of something that is a movement, you’re more yourself than you’ve ever felt.”

Queer activists have a long history of supporting other causes. From Lesbians and Gays support the Miners in the 1980’s to their contemporary spin off, Lesbians and Gays support the migrants, the core tenets of radical liberation campaigns is  the understanding that no one is free until we are all free. Struggles are intertwined; the right to abortion and bodily autonomy are connected to trans rights, state violence against migrants and workers is the same violence queer people experience.

The original Pride was an event that kickstarted queer people taking self determination and rights into their own hands and connecting it to a broader movement on the left. Instead of accepting the corporate version of Pride on offer today these students are organising to support each other and connecting with comrades in a range of struggles just as the GLF did. They are keeping that spirit of the original Pride alive, showing queer people are as organised and active as ever.

Linkedin
RELATED ARTICLES
OTHER ARTICLES
Following the release of his latest album, the rapper talks about finding a new approach to songwriting, attitudes to poverty, and why his music is more than a political statement.
Steel City is often overlooked when it comes to the country's cultural radar despite its role in shaping electronic music.
Yesterday, rail workers came together to protest poor pay, working conditions and job cuts in their latest round of strikes.
To mark the premiere of his new documentary on surfing giant Gerry Lopez, the filmmaker and former pro skateboarder sits down to share his unique brand of wisdom.
As the Criminal Bar Association enters its fifth week of action, criminal barrister Russel Fraser explains why the legal professionals have walked out and how action is likely to escalate.
Protestors gathered outside Downing Street following the latest atrocities committed by Israel against Palestinians living in the besieged strip.