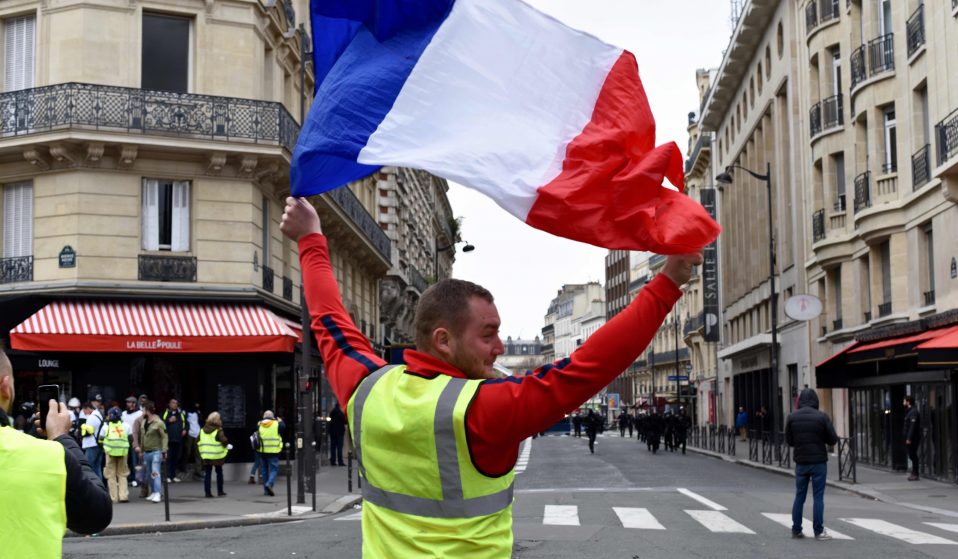 Now in their fourth week, the Yellow Vests protests are becoming increasingly tense. We head to Paris to meet some of the demonstrators defiantly demanding change in their country.

Now in their fourth week, the Yellow Vests protests are becoming increasingly tense. We head to Paris to meet some of the demonstrators defiantly demanding change in their country.

A day before “Act IV”, the name of the planned demonstration on December 8th by the Gilets Jaunes (Yellow Vests), an uncomfortable silence reigned over Paris. 36 metro and train stations were closed, so were dozens of shopping malls and museums. Even concerts and ballet shows were cancelled and postponed.

This atmosphere was not unjustified. The demonstrations the Saturday before, on December 1st, were one of the most violent protests France had seen in decades. The Arc de Triomphe was vandalised, shops were burgled, and cars burned in affluent neighbourhoods. The confrontations between authorities and protesters caused 263 critical injuries, including 23 policemen.

The Yellow Vests protests started on November 17 because of a raise in fuel taxes. Since then, it has grown into a broader movement against social inequalities in France, aimed specifically at Emmanuel Macron, whose popularity level is at a record-low 25 per cent. However, as protests continue week by week, fewer people are attending, but the violence and arrests are increasing: a staggering 1,082 people were arrested in Paris last Saturday out of 10,000 protesters. With several extremists and “casseurs” (rioters) intruding the demonstrations, many Yellow Vest protesters who came to demand change non-violently were caught in the intense confrontations between authorities and rioters on Saturday. 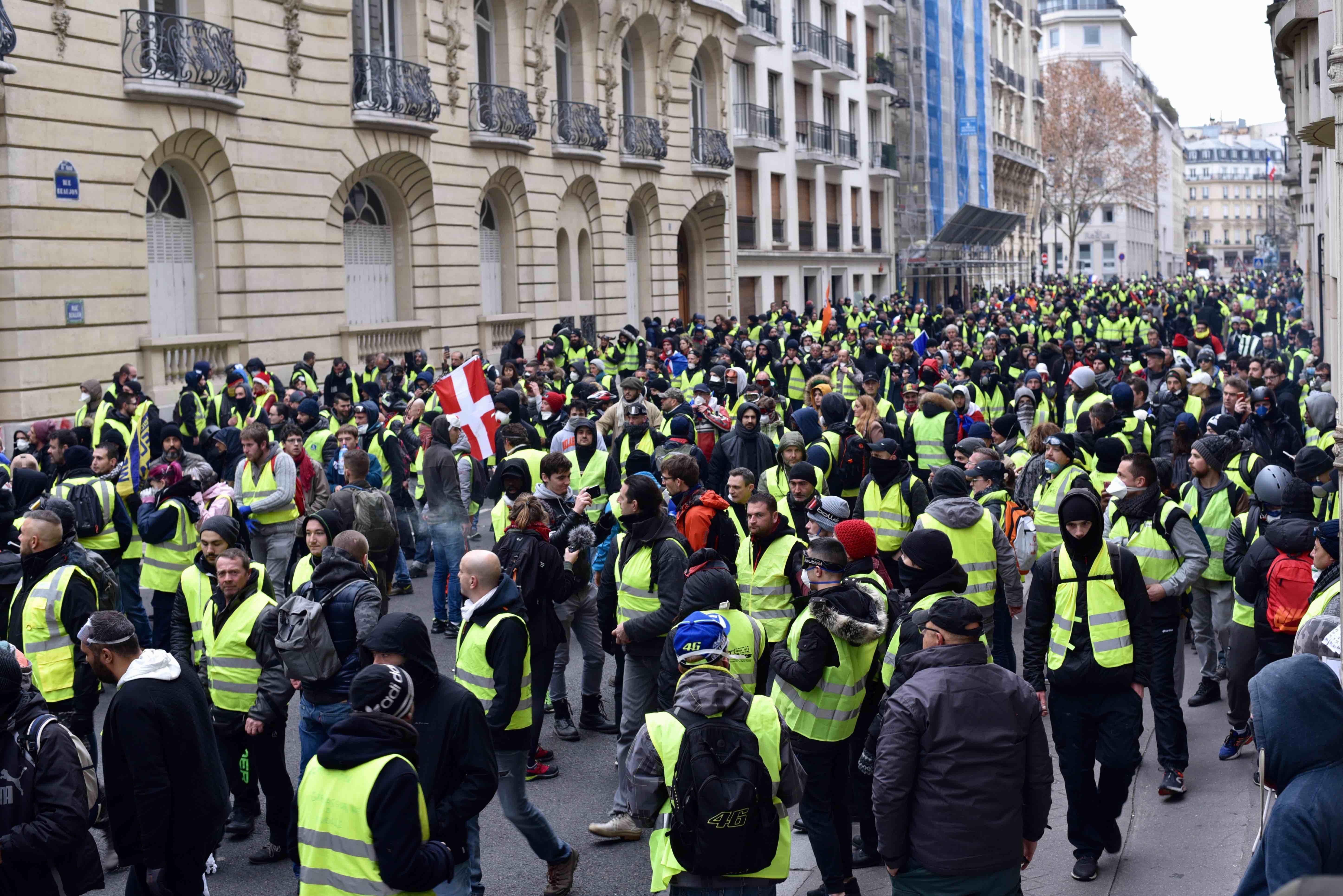 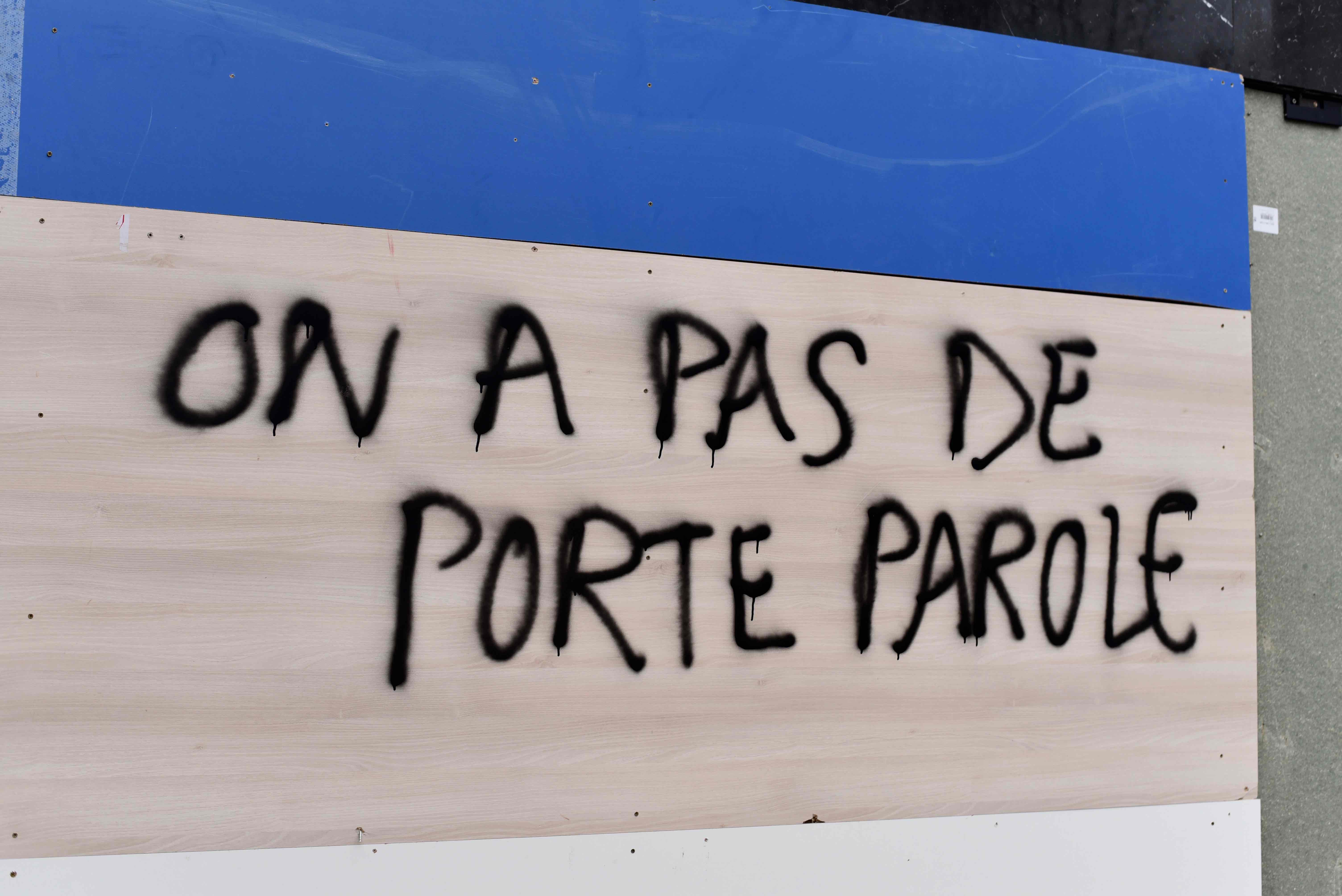 Jimmy, a 30-year-old deliveryman and cook, was one of them. He was protesting on the Champs Elysées at night and took two hours to get out after authorities blocked all roads. He had no way of contacting his wife or his three-year-old daughter in the suburbs of Paris. Jimmy was badly injured after being hit by a flash-ball by CRS riot police and had to limp on his hour-long walk to Gare de Lyon train station. “It was my first time protesting with the Yellow Vests today,” he told Huck. “But it was not what I expected. There was way too much violence from police.”

Flash-ball guns and tear gas are the main weapons used to disperse large crowds of protesters by French riot police, with 8,000 officers called into action on Saturday. Although not lethal, flash-ball shots can permanently erase eyesight and cause severe injuries if a person is hit by it in close-range. “My wife was scared when I told her I was going today,” Jimmy explained. “But I’m here to ensure a better future for our daughter. I’m not here for the violence.”

Jimmy explained that although it was his first time coming to one of the Yellow Vests protests, he had been following the movement on social media for some time. “I could see it coming from a long way away,” he said, clenching his teeth in pain from his injury. “I’ll still be here next week, from 8am to 8pm, like today.” 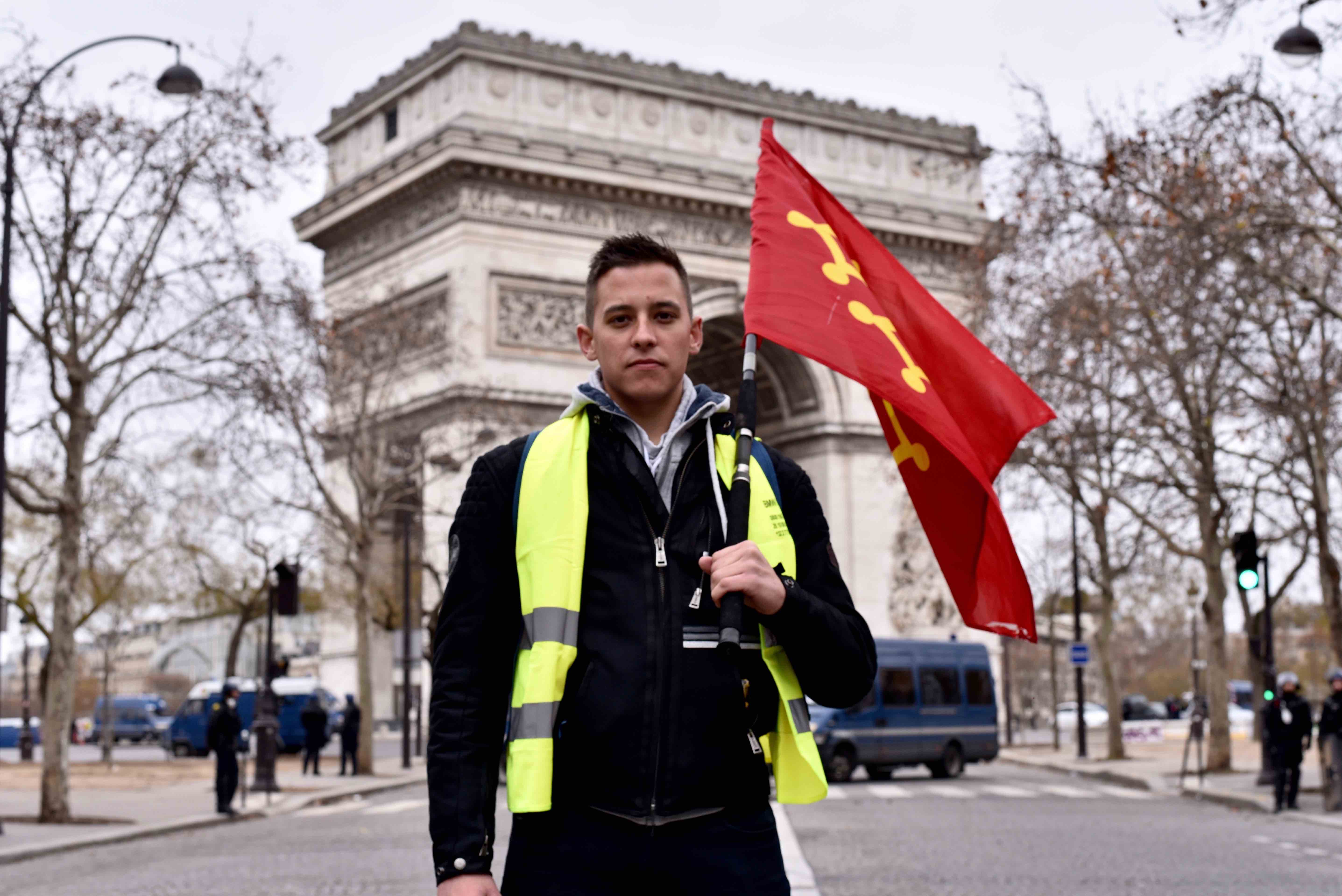 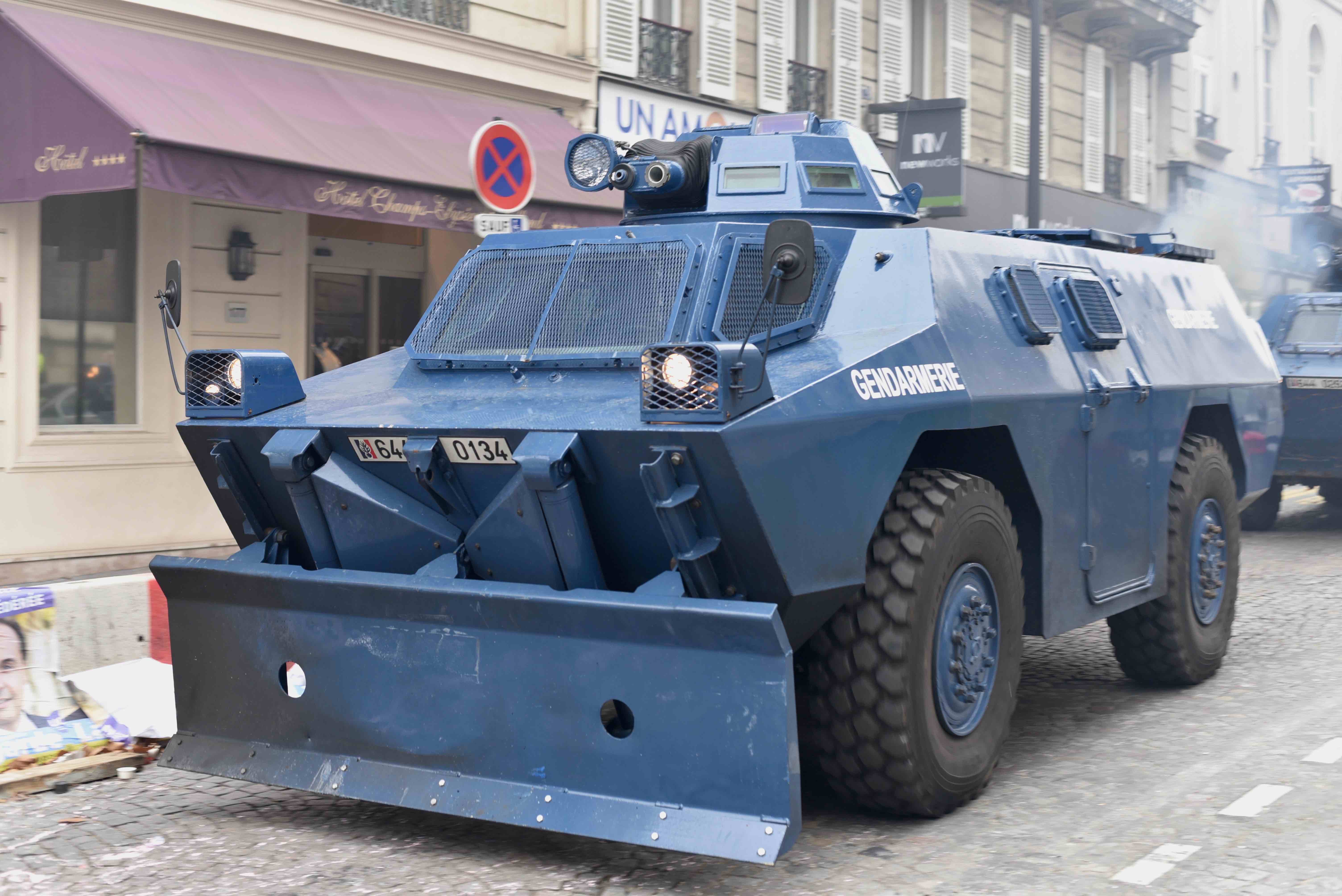 Although Jimmy only lives a couple hours outside Paris, many of the protesters in the French capital came from across France in solidarity with the movement. Christopher, a 25-year-old truckdriver, drove all the way from Narbonne, a town in the south coast of France, to be present at what he called a “historic” day in Paris.

“I have a two-year-old son, and with increasing taxes and new policies we’re not able to provide for him,” he explained. Christopher had been going to the Yellow Vests protests every week, though he started demonstrating on the road like many others in countryside towns who stopped traffic on motorways as a way to protest rising fuel taxes.

Others, however, were more revolutionary in their demands than Jimmy or Christopher. Maï, who was in the middle of the cloud of tear gas on the Champs Elysées, was frustrated and angry at police for arresting and taking in four of her friends “only because they had gas masks” to protect themselves from tear gas. “The rioters and vandalisers, that’s not us,” Maï said, while wearing her t-shirt above her mouth to not breathe in the smoke. “I don’t approve of that. I’m here because I want to change the senate. We have to move to a sixth French Republic.” 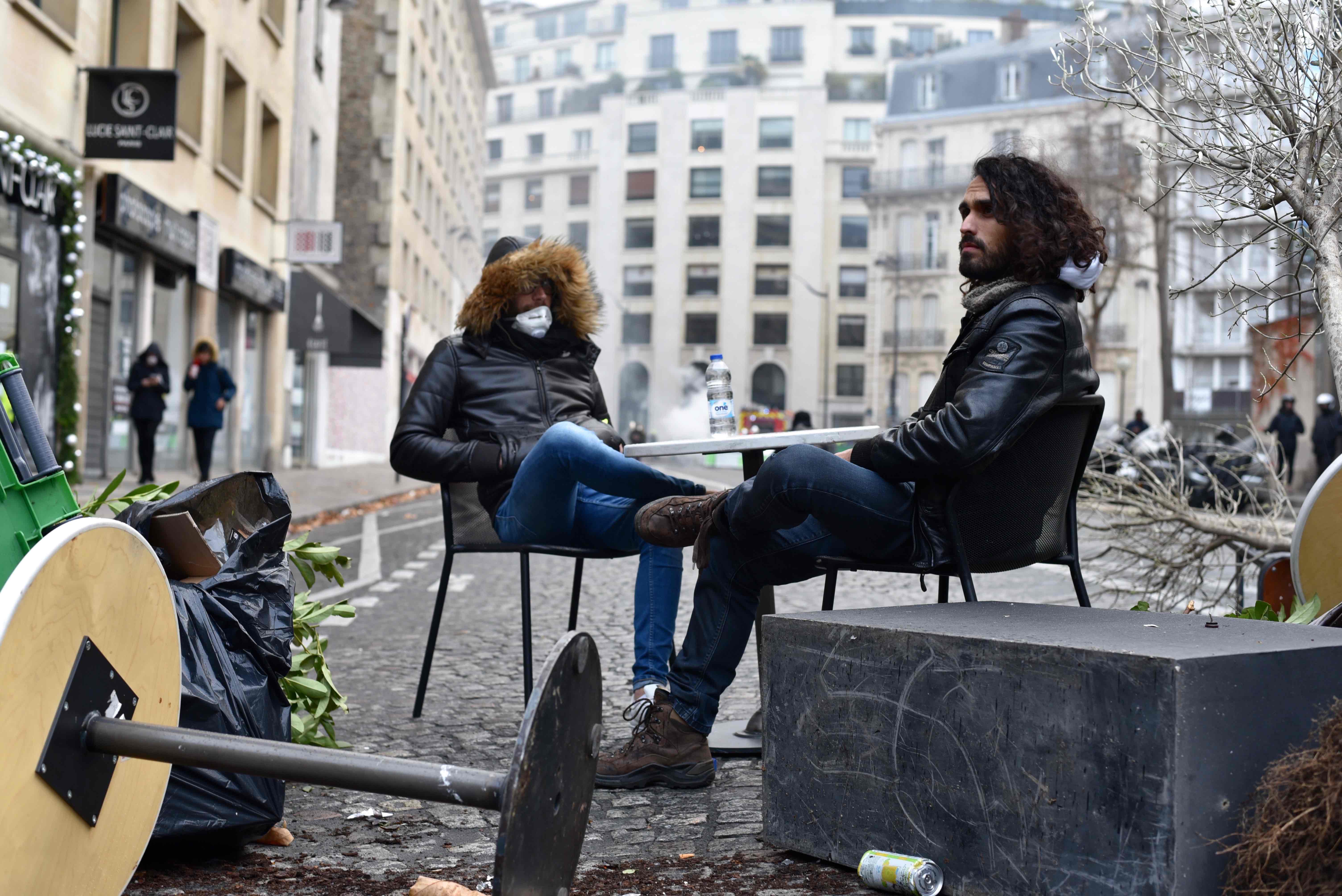 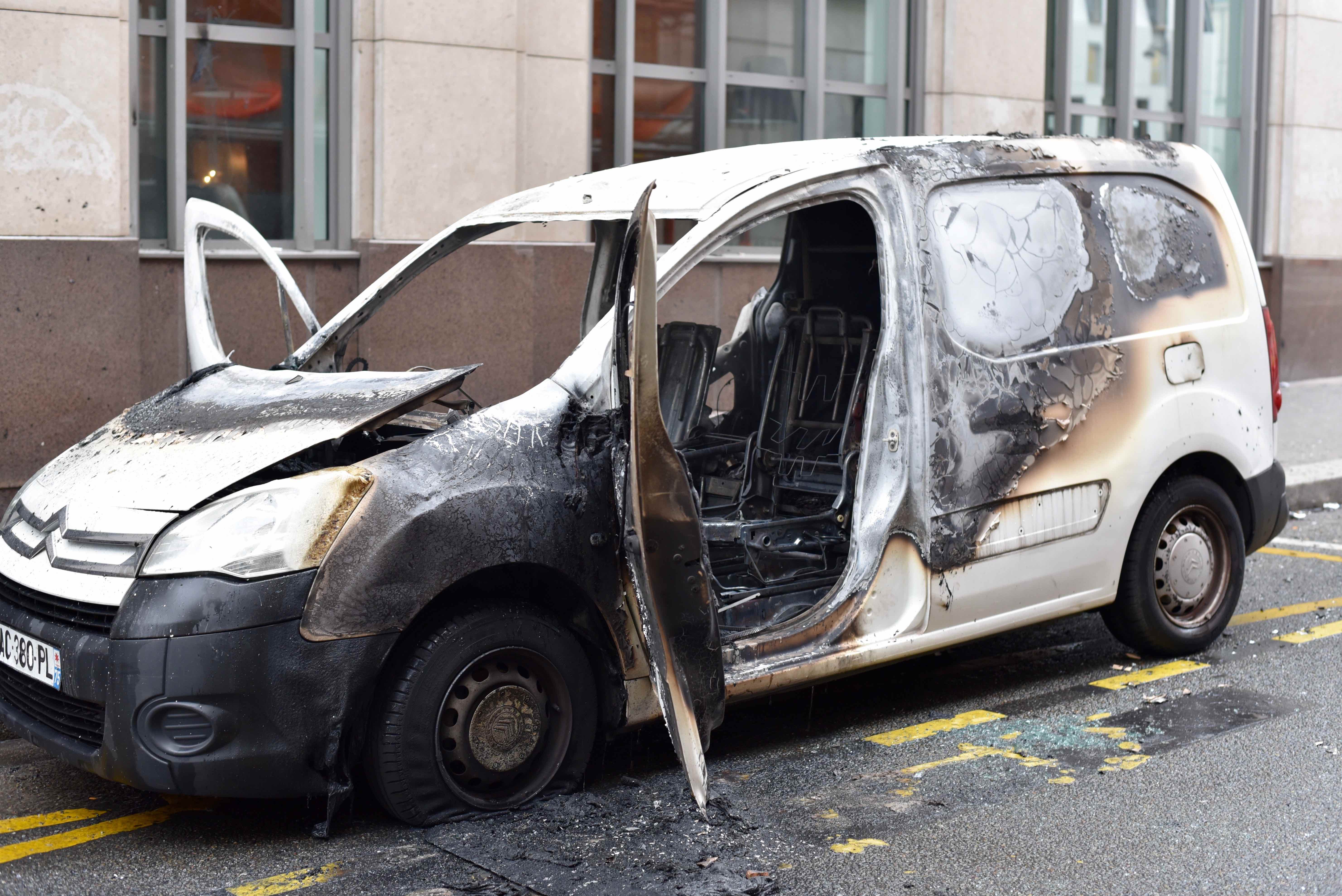 Meanwhile, Fred, who was seen waving the French flag proudly in front of the CRS riot officers and the Arc de Triomphe past sunset, came all the way from Menton, close to the Italian border, for the protests. “I’m ex-military and a fireman,” he said. “I came here for the weekend – not for the violence, but because we want to change the French Republic.”

As Fred brandished his French flag proudly, others in the march carried flags that ranged from the self-explanatory “Frexit” to “Referendum d’Initiative Populaire” (Popular Initiative Referendum). The latter aims to give power back to the people and allow citizens to create and submit law proposals to the government if they pass 700,000 signatures.

But although many protesters were at the protests merely to make their voices heard, groups of rioters and vandals were still present. A Starbucks Coffee, a tobacconist, several banks and many other shops between the Champs Elysées and Saint-Lazare were robbed and glass-windows smashed, as the streets were covered in tags that ranged from “Down with capitalism” to the recurrent “Macron Démission” (Macron Quit).

As the French President declared on Monday night that he would raise the minimum wage by €100 a month and already promised to suspend the infamous fuel tax, the government has shown its intention to find a common ground with Yellow Vests protesters. But as the Champs Elysées last Saturday night echoed with cries of “we’ll be here tomorrow, and we’ll be here next,” it seemed like the protests were nowhere near finished. 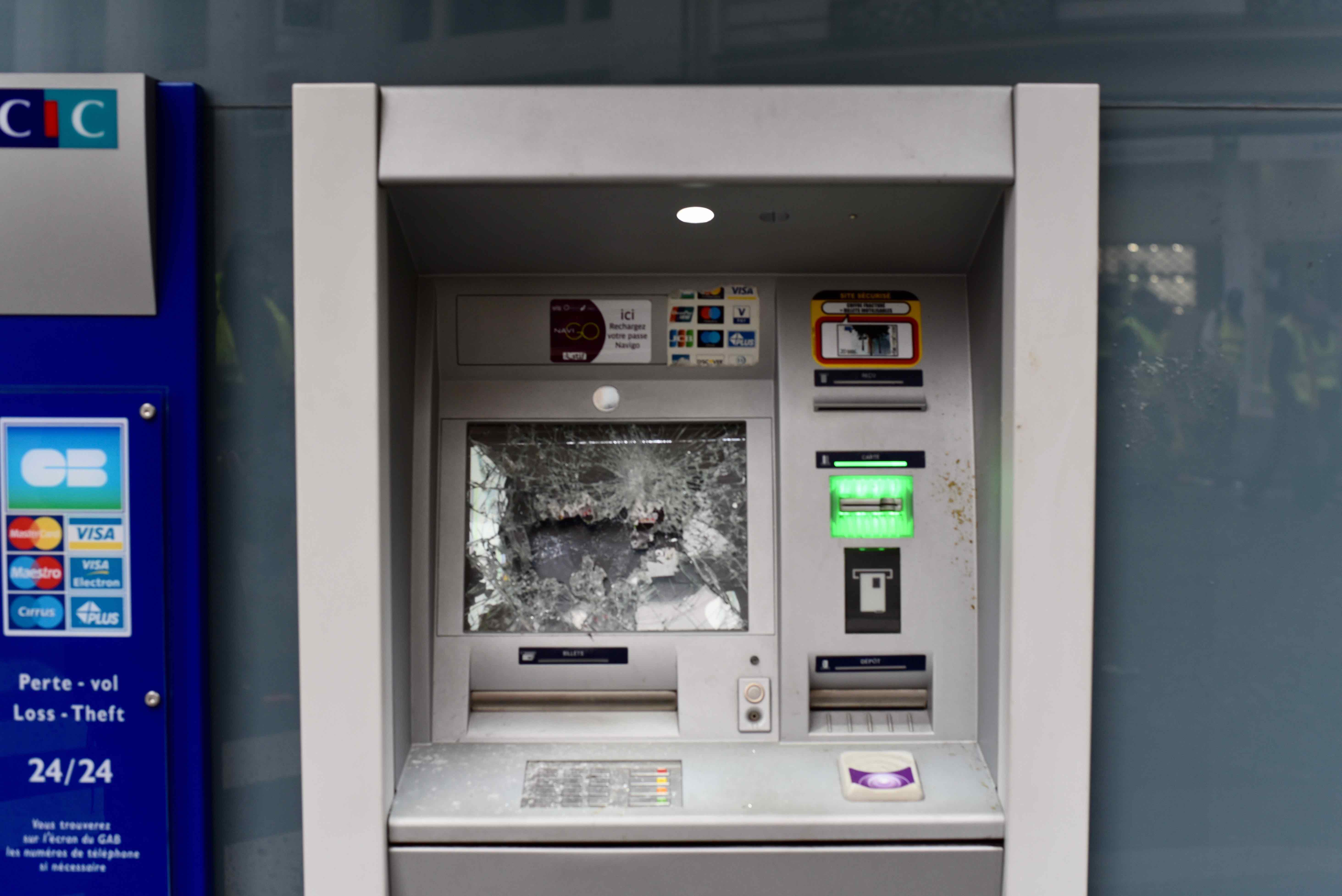 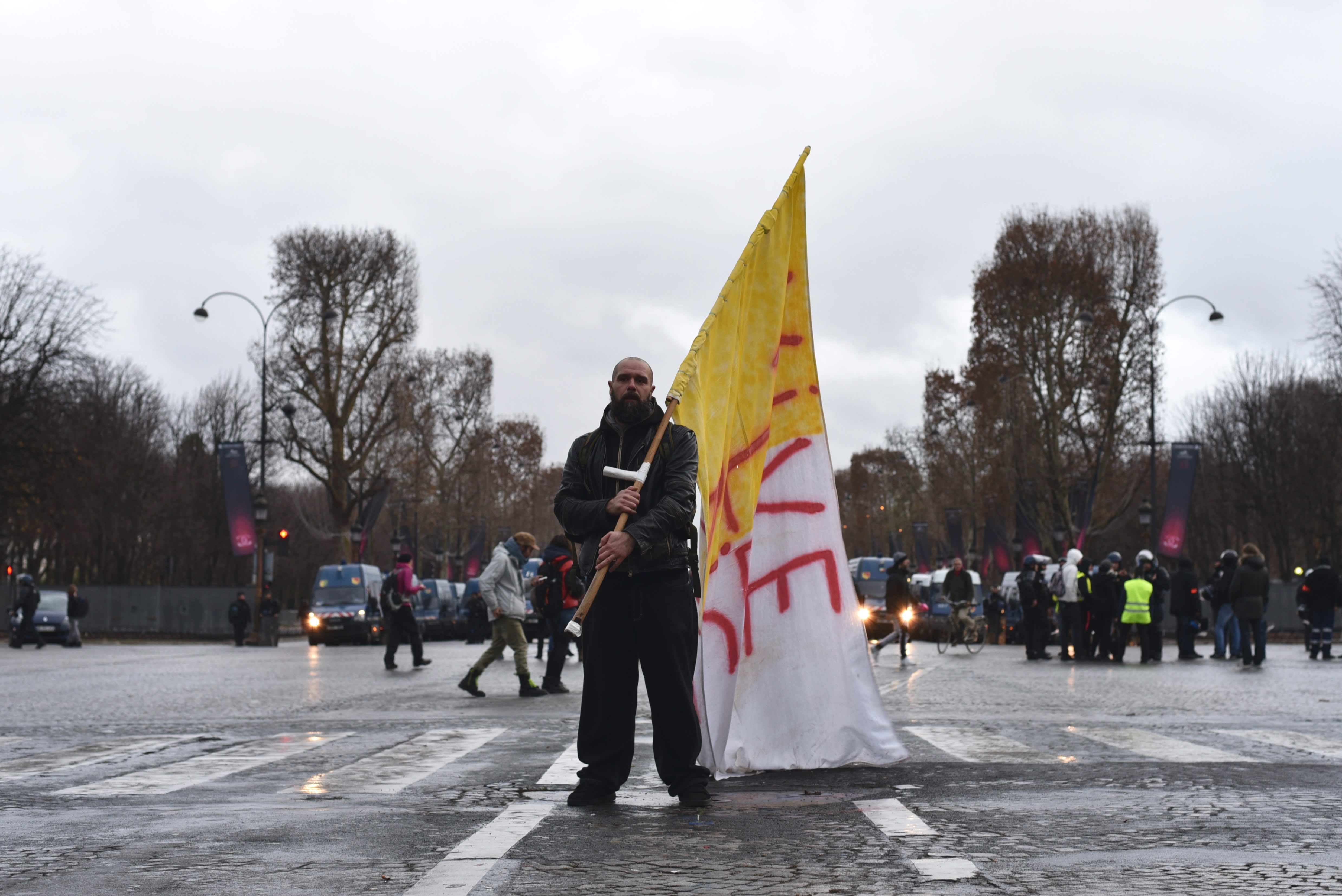 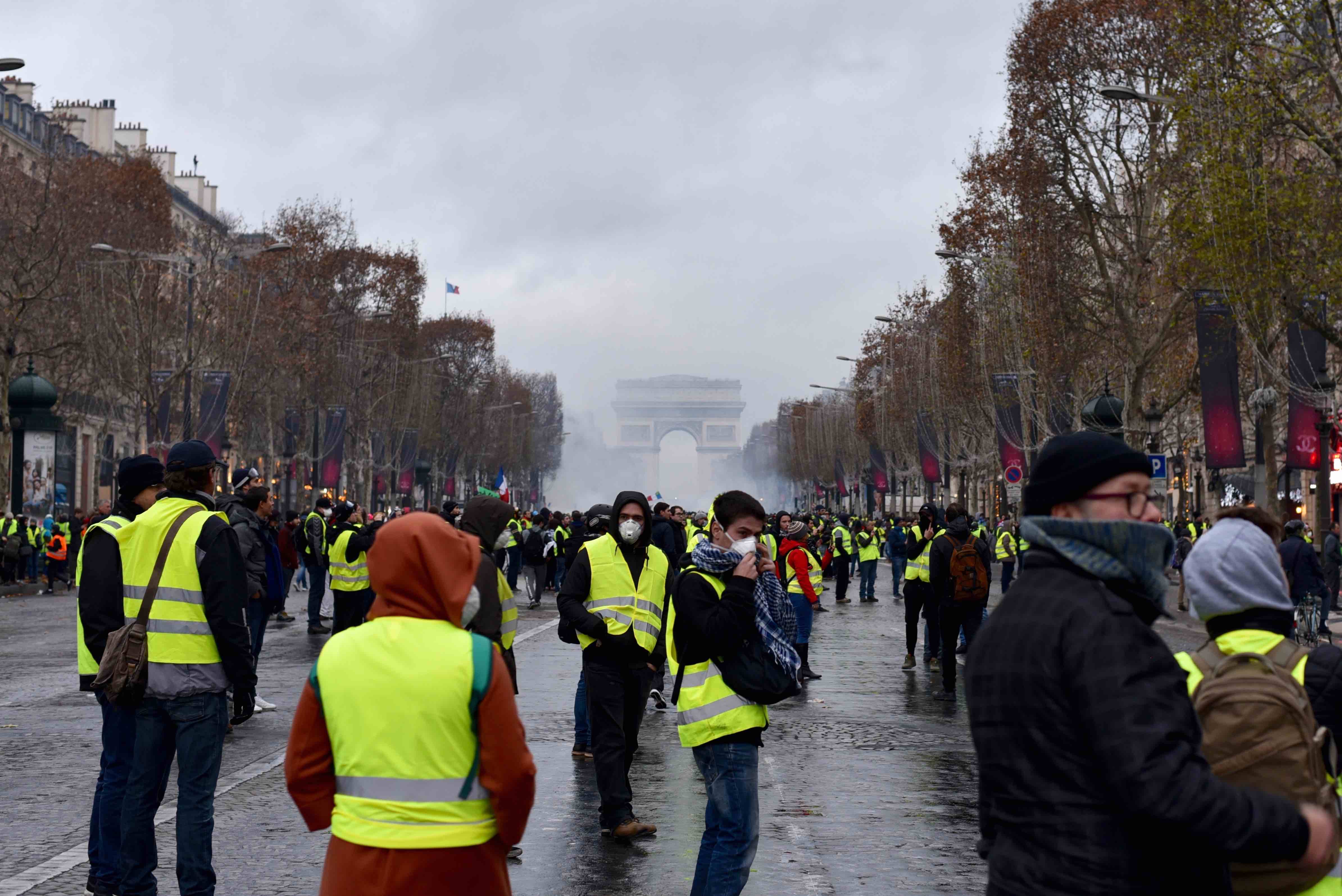 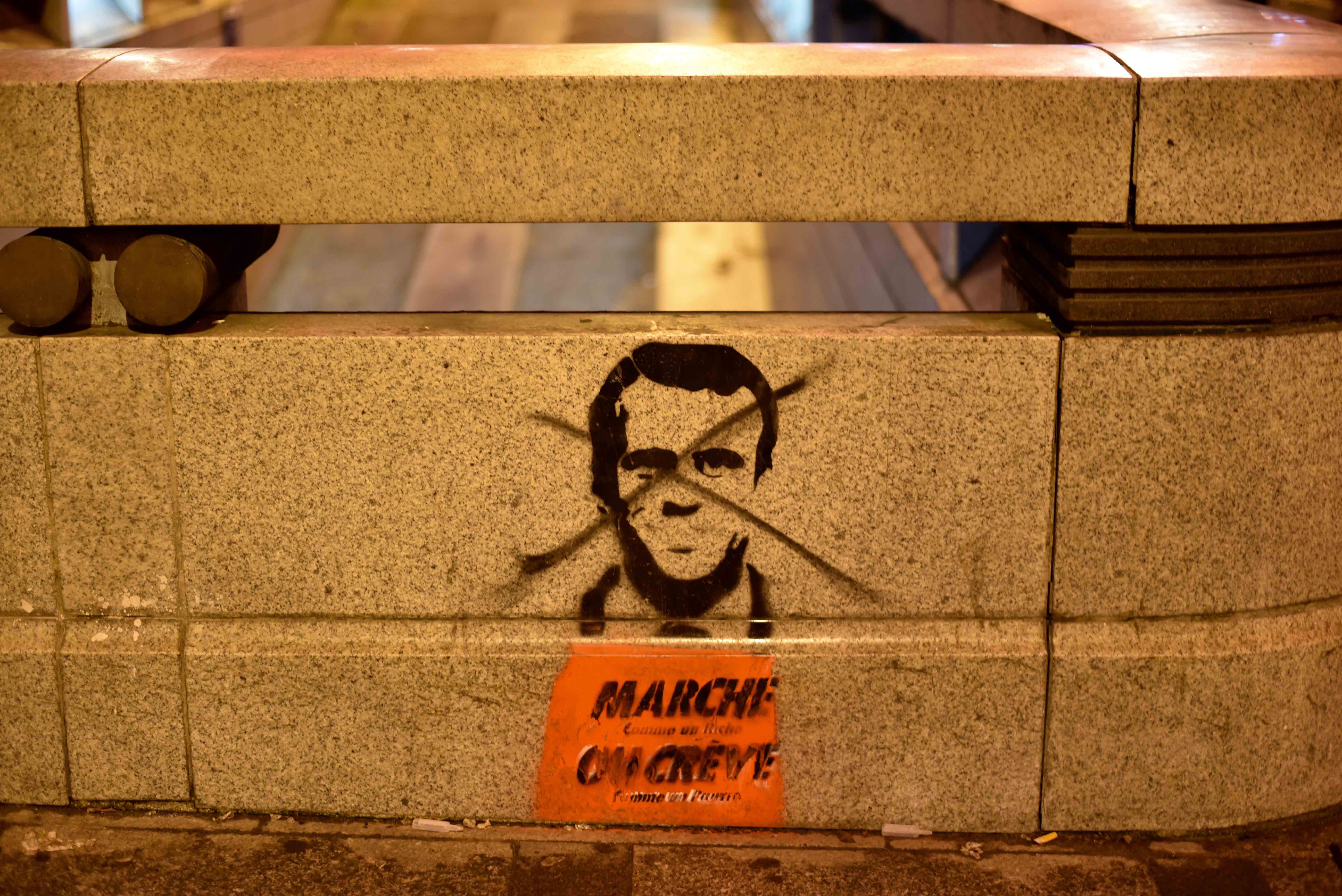 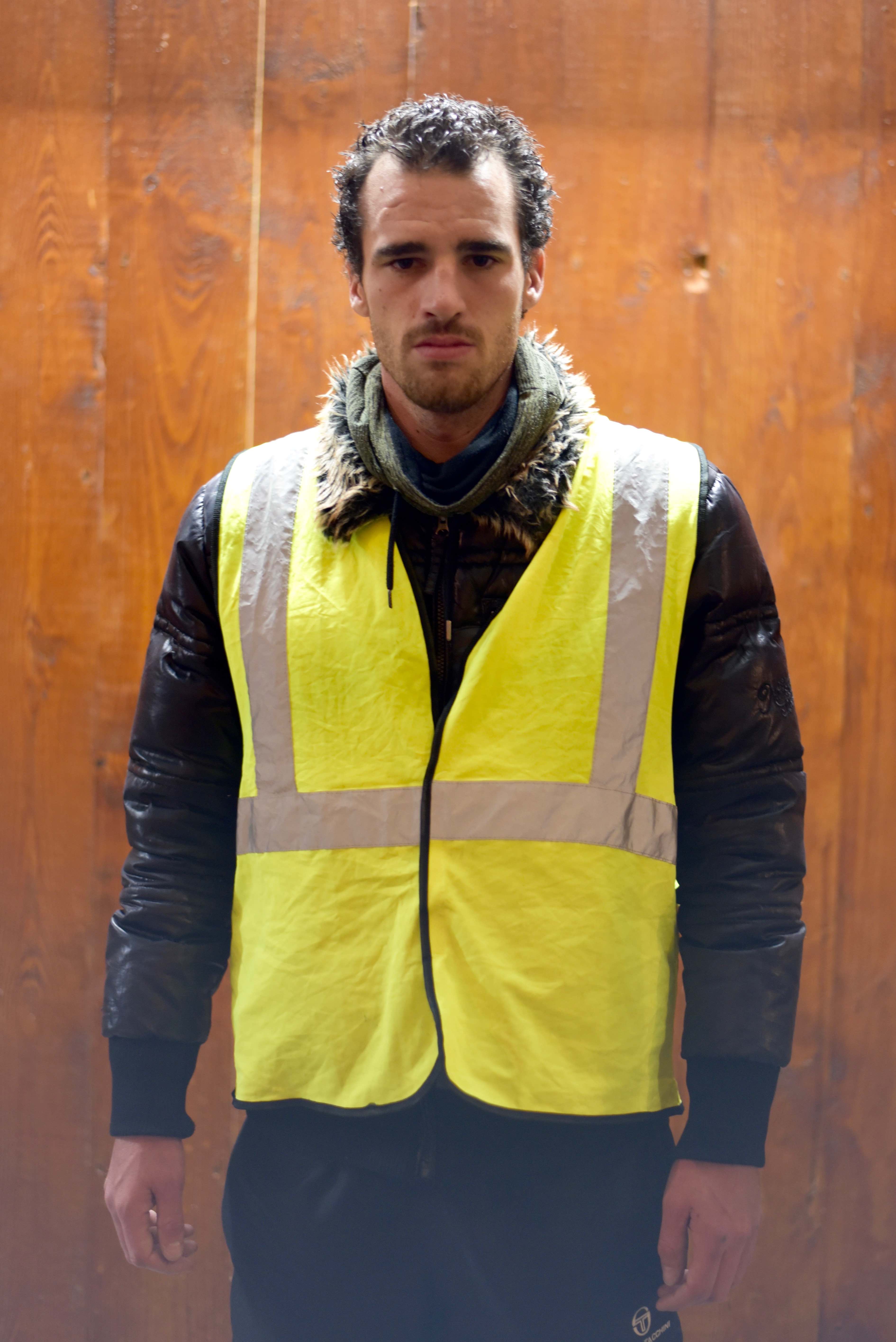 Linkedin
RELATED ARTICLES
OTHER ARTICLES
Curator Antoine de Beaupré discusses his immense record collection and what it tells us about the intersection of music, photography, art, and commerce.
Proposals to introduce a minimum GCSE threshold for student loans will disproportionately affect those from marginalised backgrounds.
In the wake of the decision by the supreme court to overturn Roe v Wade, thousands of protestors filled the streets to express their rage and anguish.
Photographer Matthew Brookes recalls following a group of young people in Venice Beach living in search of the perfect wave.
Freddie Miller’s new series of photographs investigates who today’s trainspotters are and what drives their unfettered enthusiasm.
Whether it's partygate, the climate crisis or the spiralling cost of living, the fightback begins on the picket lines writes Tommy Vickerstaff