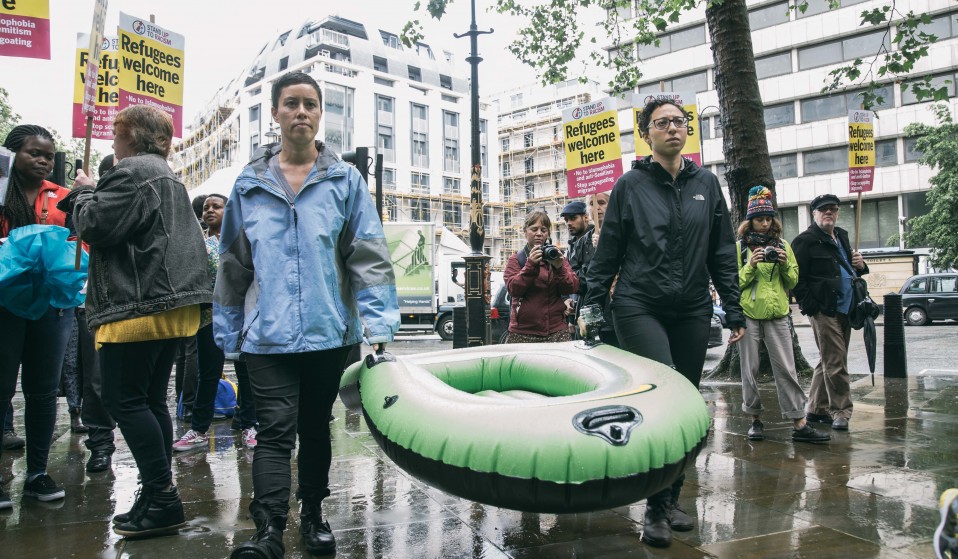 On World Refugee Day, activists storm the Australian embassy in London with a boat to symbolise the thousands of desperate refugees turned away from Australian shores.

On World Refugee Day, activists storm the Australian embassy in London with a boat to symbolise the thousands of desperate refugees turned away from Australian shores. 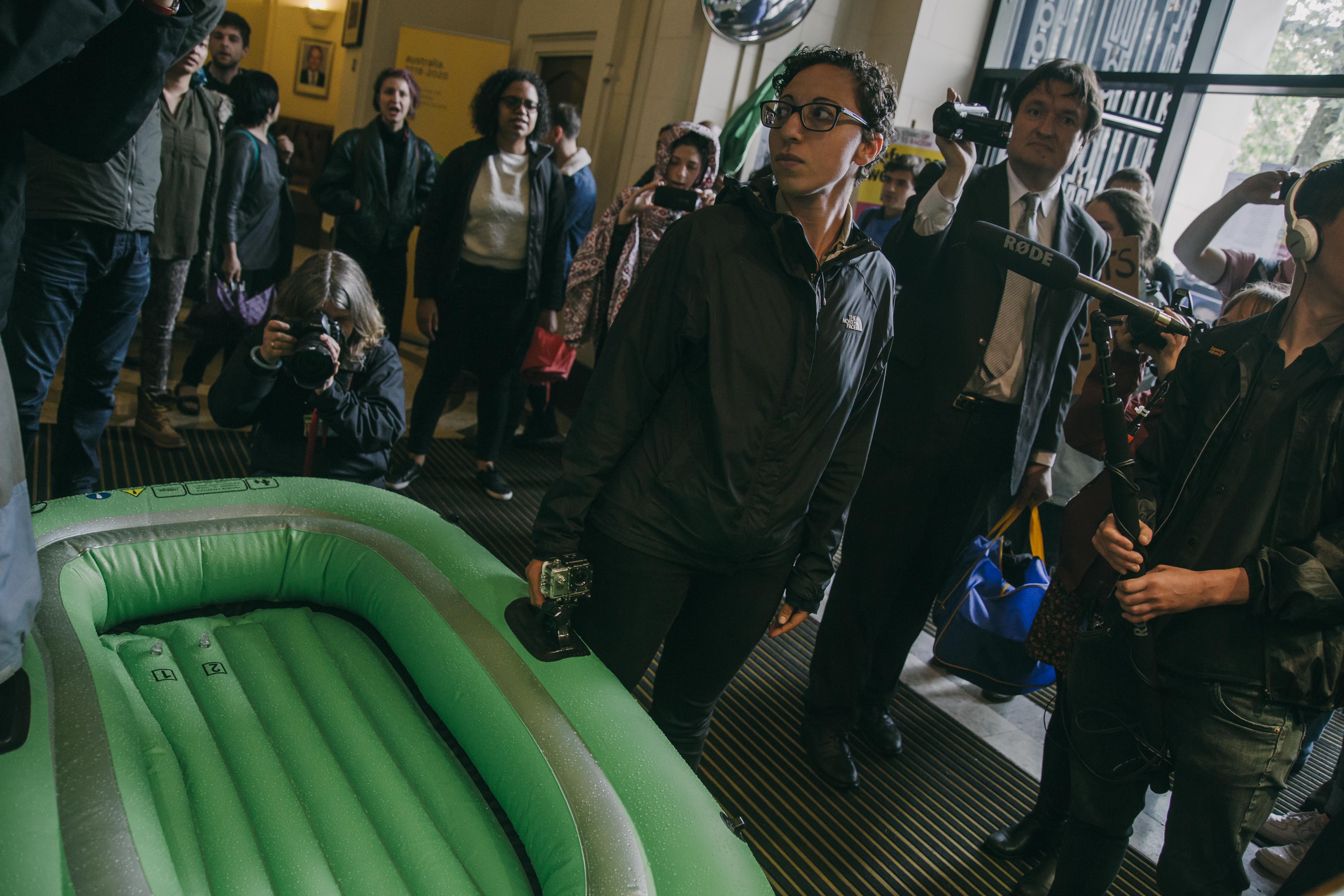 When the little green man appears, these two women will drag their £30 Argos blow-up boat across the road towards Australia house, the Australian embassy in London. They hope to draw attention to the precarious journey thousands of refugees have embark on in precarious floating boats to seek sanctuary in Australia – only to be turned back or placed in indefinite detention in secluded island centres. 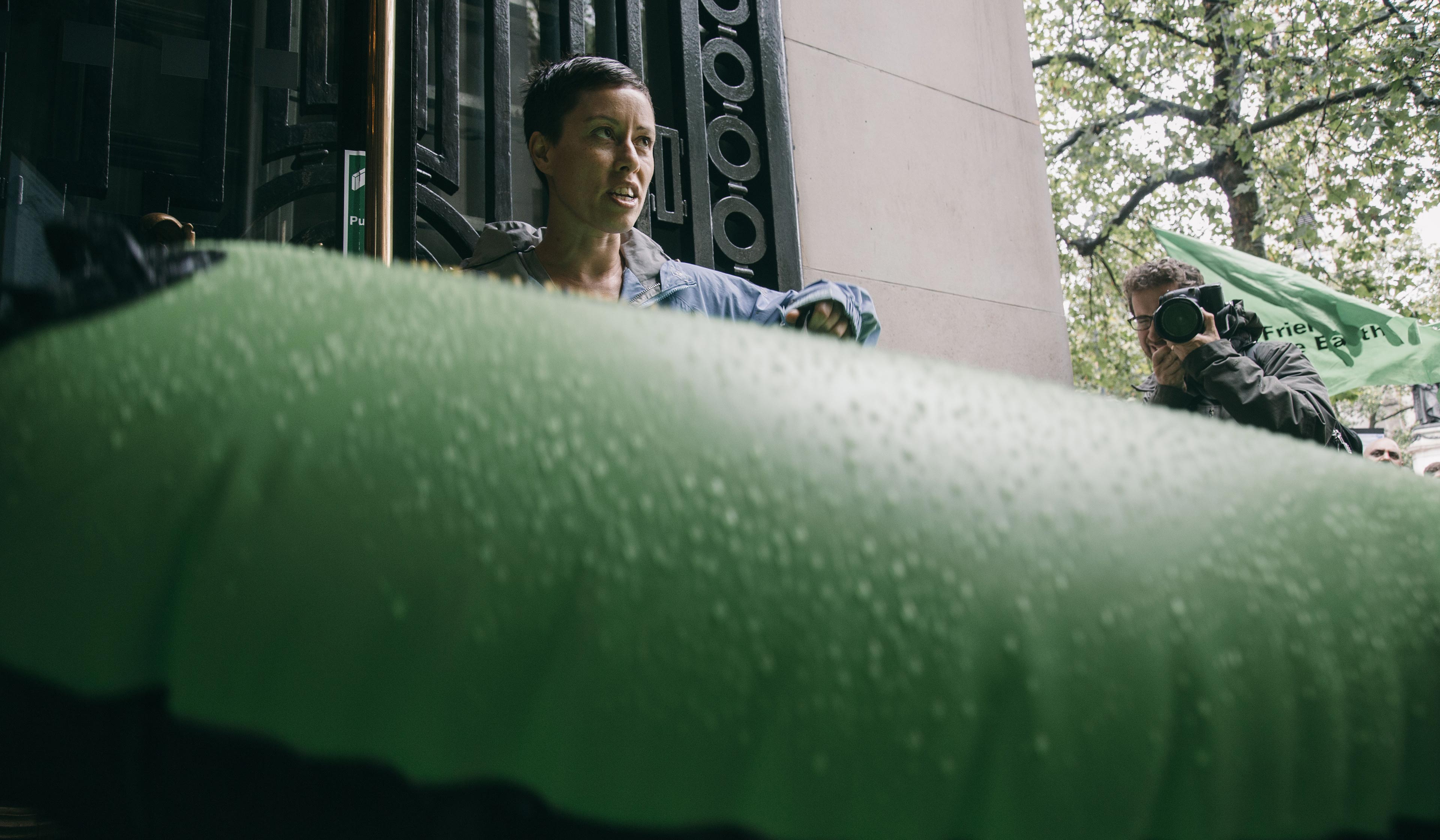 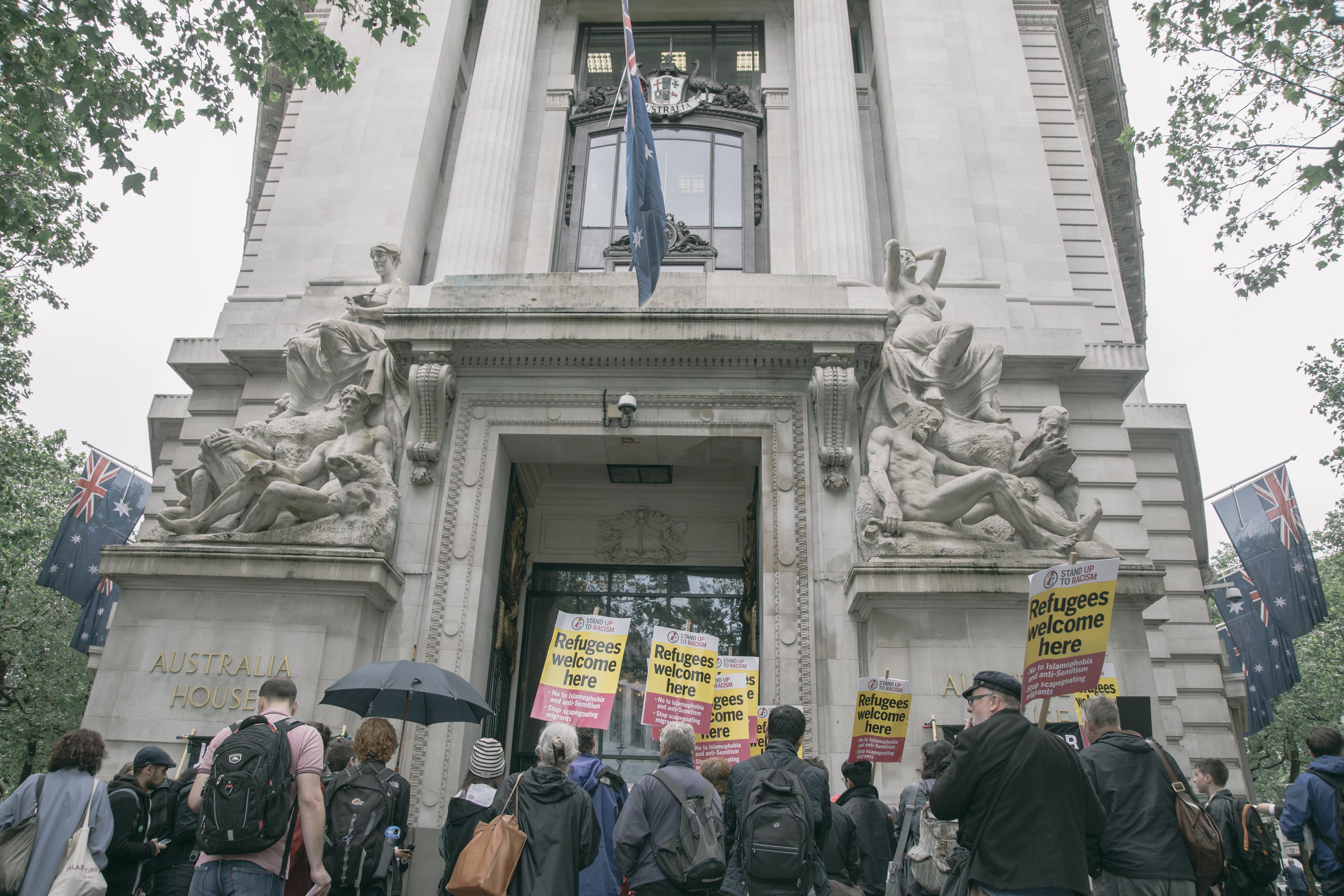 This group of activists from International Alliance Against Mandatory Detention picked World Refugee Day to highlight Australia’s controversial “Stop the Boats” policy. After a number of highly publicised incidents of boats carrying refugees arriving on Australian territory in the early 2000s, the government adopted a harsh preventative strategy that sees boats intercepted and turned back. Those who do make it to Australian soil are detained in isolated detention centres, like Nauru or the Papua New Guinean island of Manus. The UN has found forced removals to be in breach of the International Convention on Refugees, condemning conditions inside as in breach of the UN Convention Against Torture.

There’s already a group of protesters standing in the afternoon rain, assembled outside the grand doorway of Australia’s UK embassy. They’ve erected banners in tribute to two of the detainees who have died in Australian detention on the island prison camps.

Omid Masoumali, 23, from Iran, died after self-immolating at Nauru detention centre in April 2016. Reza Berati, 24, a Kurdish refugee fleeing Iran, was beaten to death during riots inside the Manus Island centre, Papua New Guinea, in February 2014.

The crowd of around 40 are reading speeches and testimony of the people who have faced illegal or degrading treatment, those who’ve died at the hands of inhuman policies designed to stop refugees reaching Australian shores.

It takes less than a minute for Nadine and Sarah to make the symbolic crossing, scaling the steps and pushing their way through the embassy’s grand metal doors.

As they squeeze the dinghy inside, they’re followed by a stream of protesters who fill the embassy foyer, as the security guard looks flustered. He picks up his radio to call for backup, and the police. 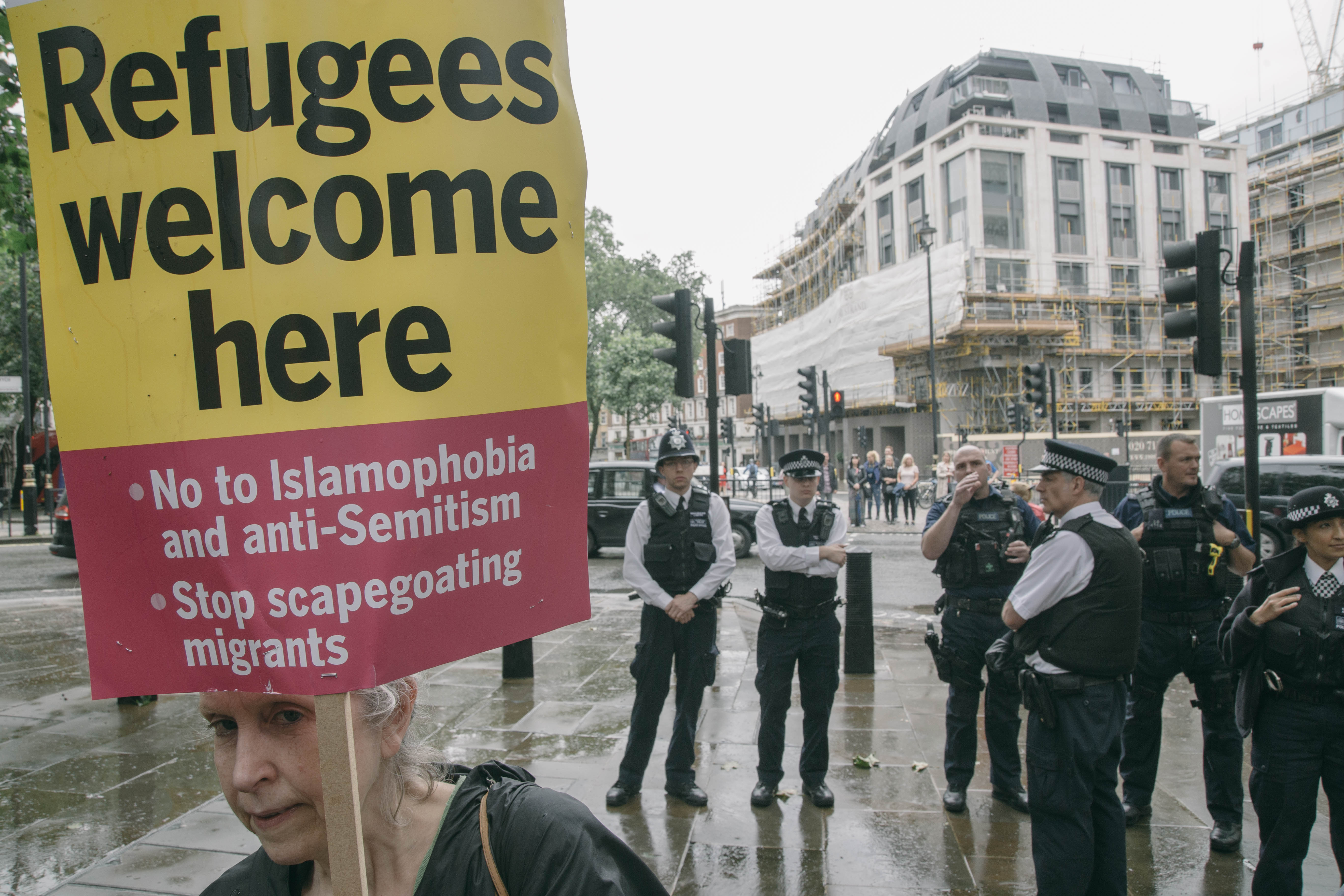 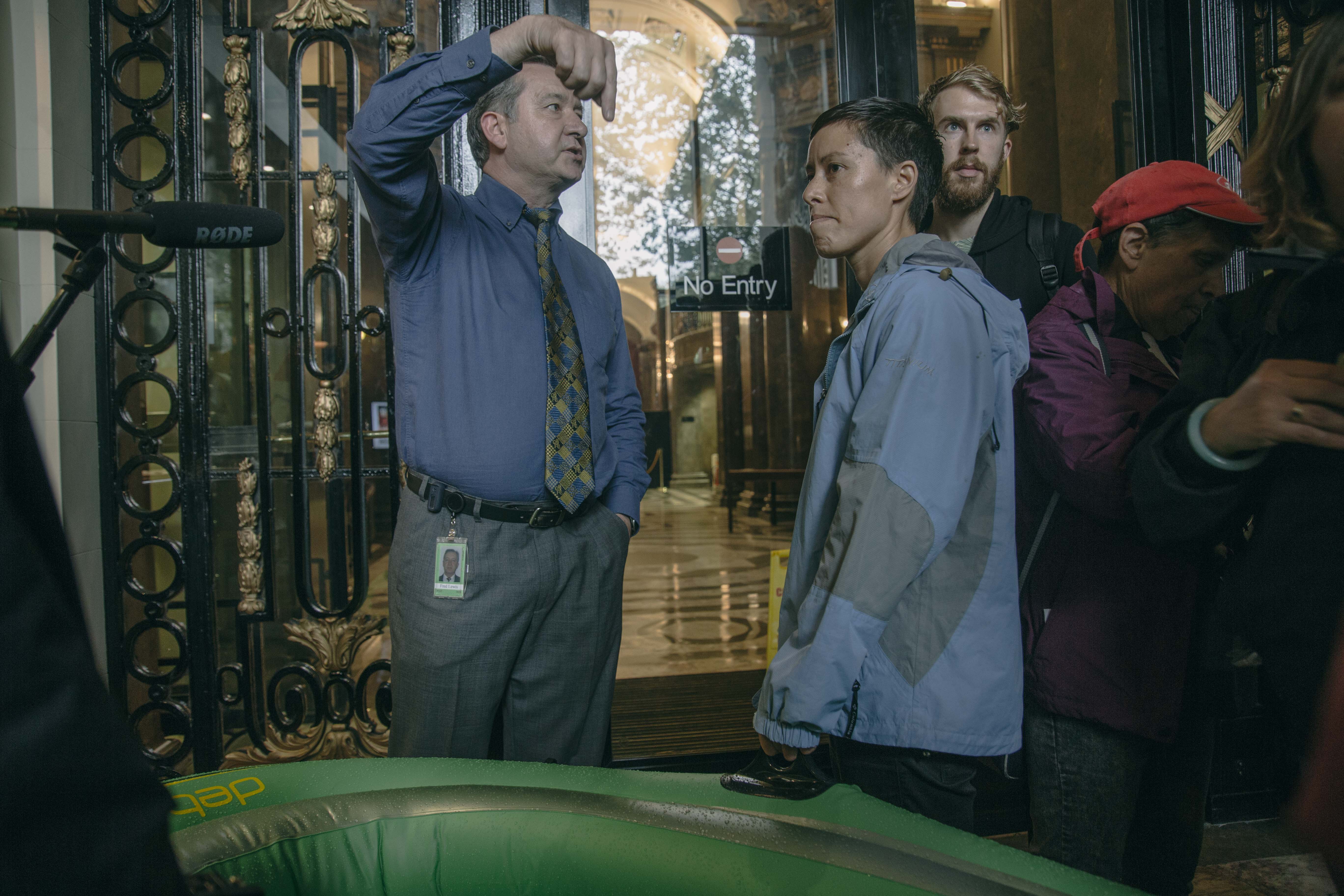 As an embassy official comes through the interior doors, Nadine strikes up with her symbolic address to the Australian officials. “This boat symbolises all refugees trying to seek sanctuary in Australia. We’re asking you to let this boat through.”

Quickly the cops arrive on site, two of them armed with tazers and handguns.

These activists know that the embassy will refuse to let the boat inside, just like Australian government do each time a real refugee boat tries to enter their territory. 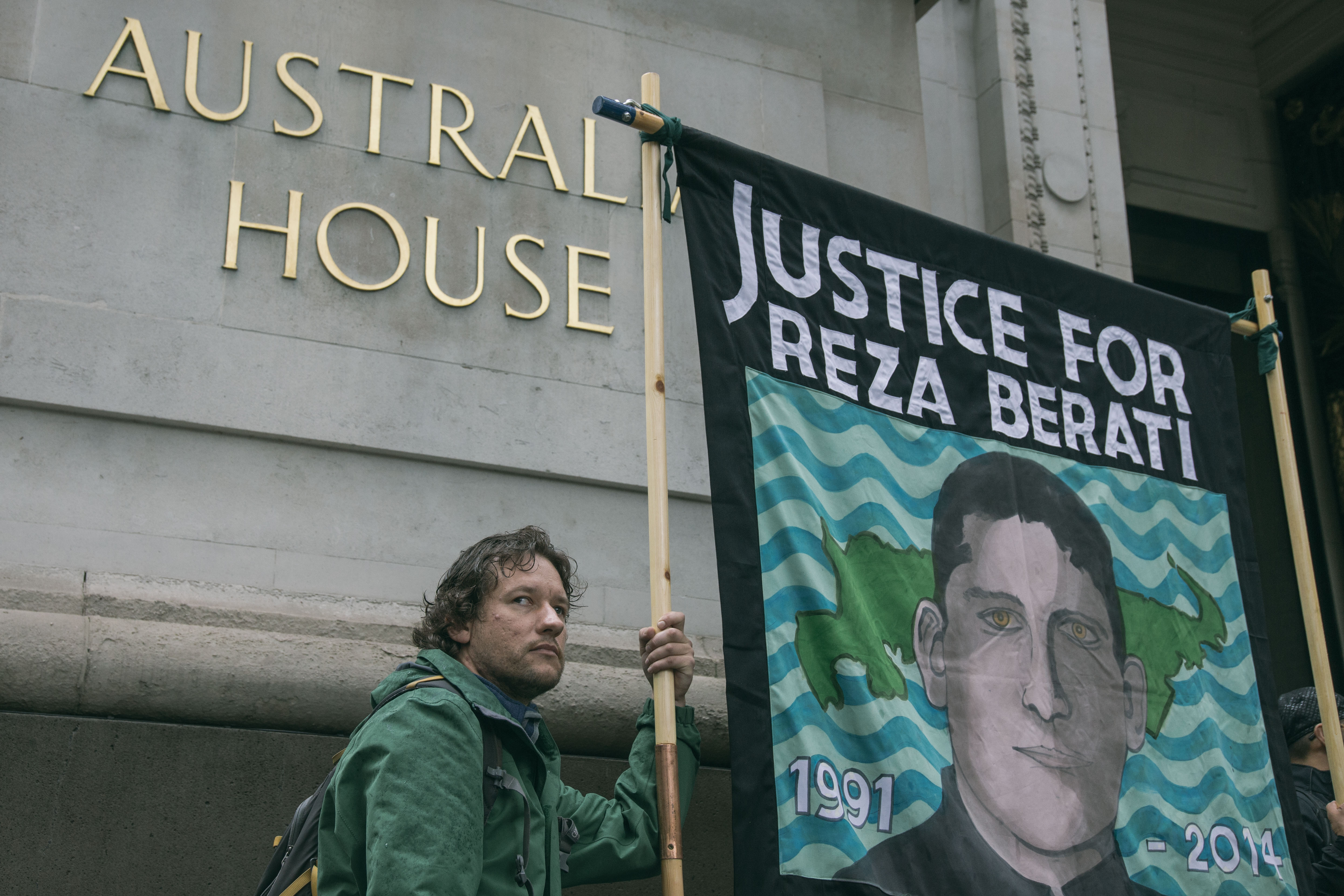 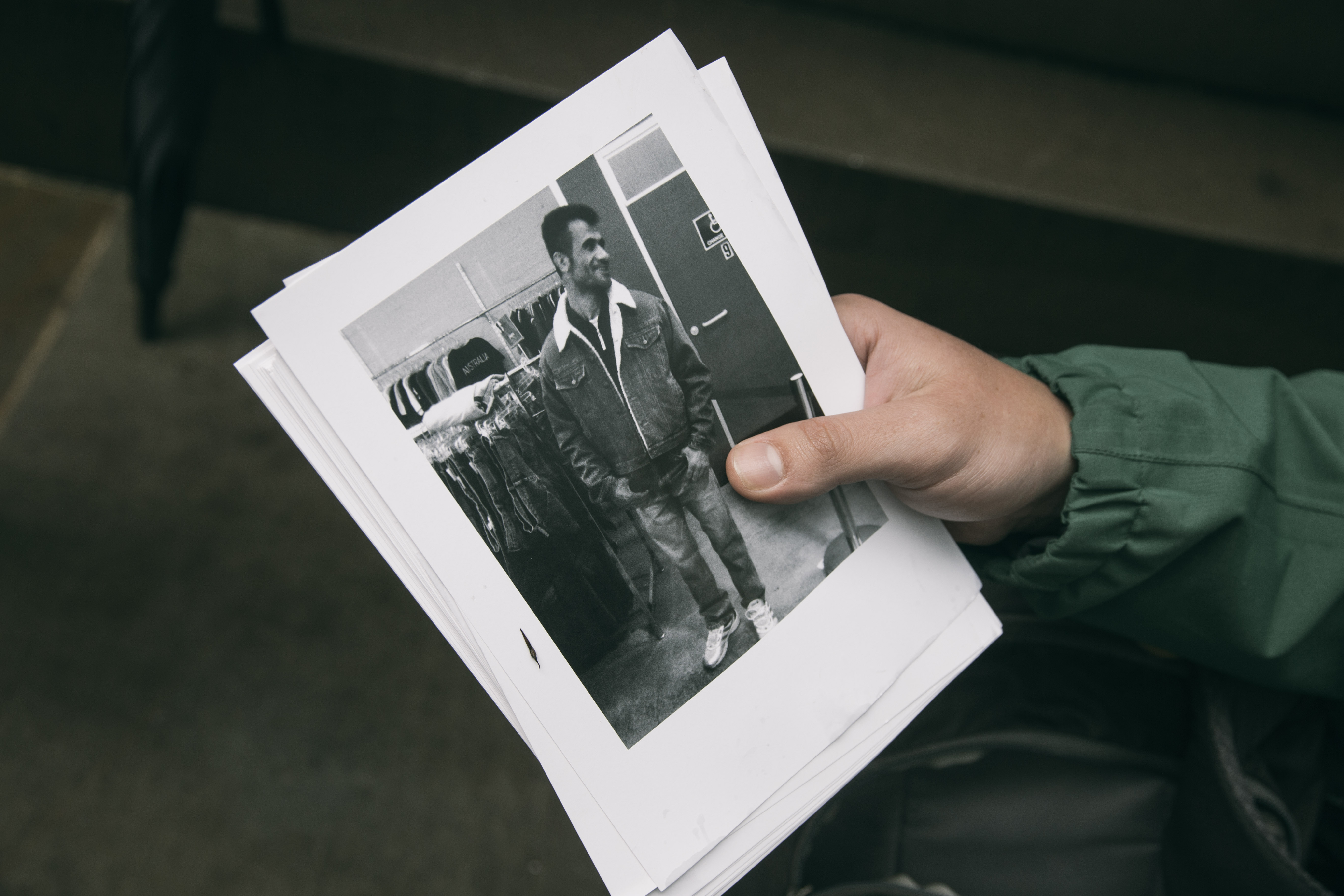 Sarah and Nadine rest the inflatable boat against the embassy, next to the banner in tribute to Omid. Sarah, jumps on the mic to explain their action to those who weren’t able to fit inside the embassy’s lobby. “As you saw, when we took the boat in it was a symbol for all refugees seeking safety in Australia,” she says. “Australia has a Stop the Boats policy, which involves the Australian government going to great lengths to deter desperate people from seeking safety in Australia.

It includes using Australian military force to tow refugee boats out of Australian territorial waters and back into danger. It includes flying refugees back to the places from which they’ve fled, where they are often immediately arrested, which happened to a boat of 12 Sri Lankans just a couple of weeks ago.”

Sarah steps down and her arms are shaking. “I know my voice isn’t shaking,” she says, “but I can’t stop my body shaking.” While the rest of the group are gathering themselves, Karol, 32, takes the mic. He connects the Australian’s degrading treatment of detainees with the private companies who profit from the immigration-security complex.

“The Stop the Boats policy is presented as a humanitarian policy,” Nadine explains. “Whenever we argue with people, they say, but it saves lives.’ What we’re trying to show is that it’s not, people die elsewhere or are receive horrific treatment in the island detention centres.”

Trauma expert Paul Stevenson recently revealed even more of the shocking treatment detainees suffer on Australia’s island detention centres, like Nauru and Manus Island, in The Guardian. Around 1,500 asylum seekers who tried to reach are Australia are held by other nations on behalf of the Australian government. Detainees are held in limbo, indefinitely, with little to no chance of reaching Australia and few opportunities to leave.

Stevenson documented detainees being totally demoralised by the experience of indefinite detention, with some being pushed into dissociative vegetative states. Many lost the will to live and have protested the conditions through suicide attempts, such as self-immolation, swallowing razor blades, ingesting washing powder and more. Stevenson has treated traumatised victims of the Bali bombings and the Boxing Day tsunami but argues what he has seen the Australian government inflicting on detainees as the worst trauma he has ever seen.

“There is such widespread support for this policy [in Australia],” Sarah explains. “It’s supported by both the Labor opposition and Liberal government. It’s a race to see who can be harder on refugees. It’s not even a broader debate around migration, there is a particular fear of boats. ‘Refugee’ in Australia is a dirty word. I think that international pressure on Australia is a really important part of the campaign. I personally can’t see it changing without pressure from outside the country.” 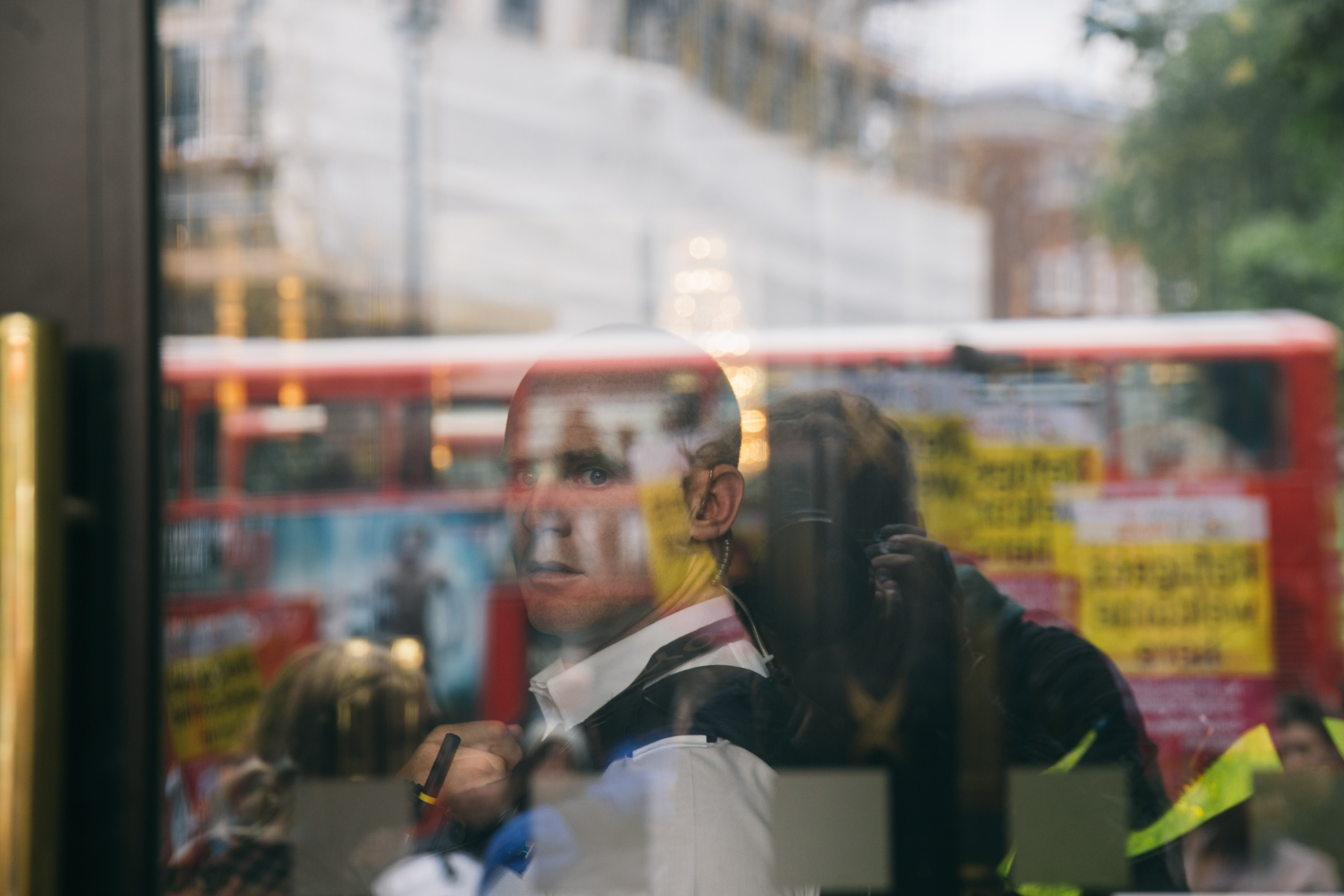 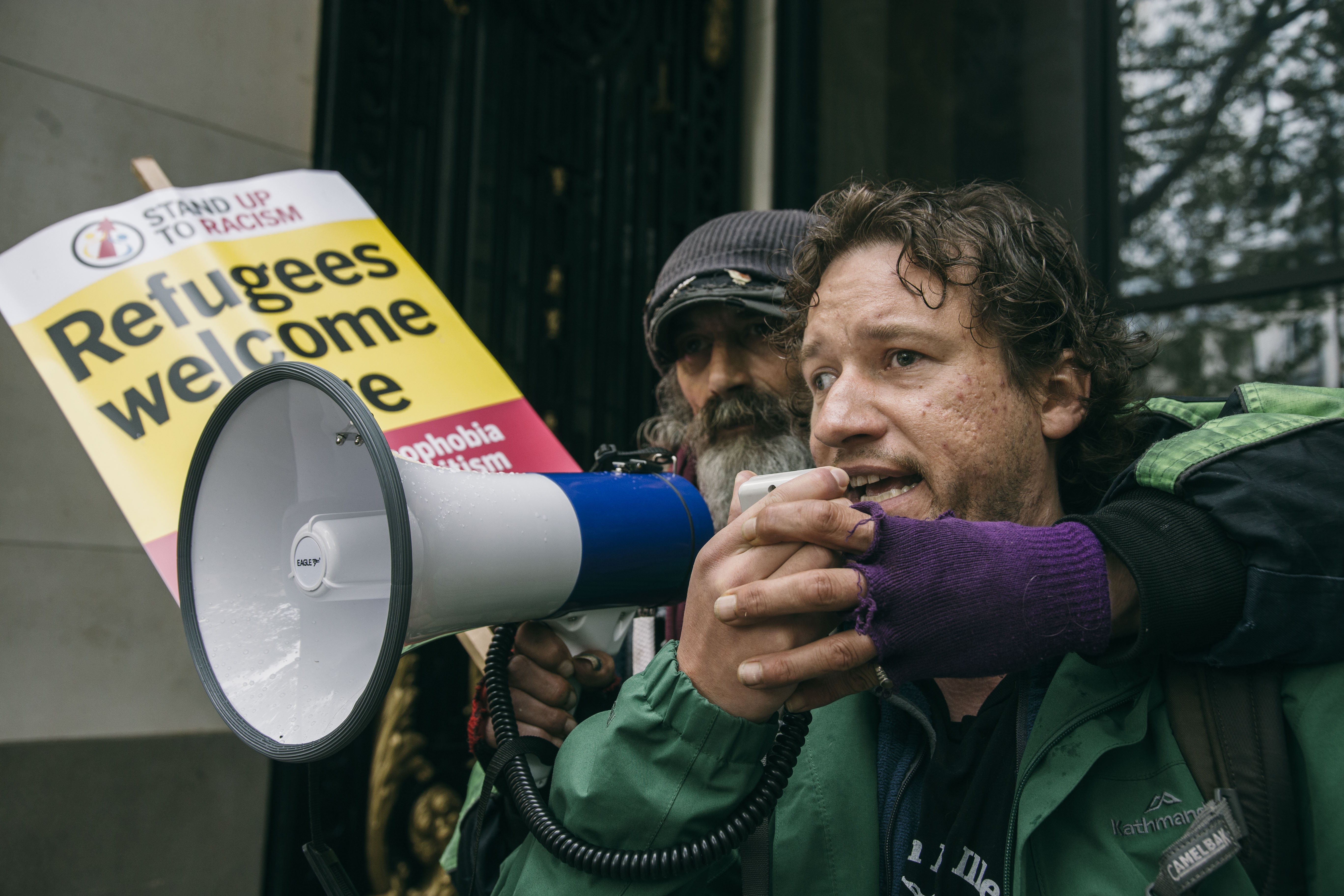 We walk up the street with Nadine and Sarah, looking for a quiet place to decompress the events. Through the café window, we can still make out the party campaigners across the road, holding placards and leaflets for the Australians arriving at the embassy to vote. But Nadine and Sarah are doubtful Australian voters will reject the Stop the Boats policy. “The conservative [Liberal Party] government asks for reelection on the basis that it has stopped the boats,” Sarah explains, although there continue to be regular incidents.

“They claim the Labor opposition is being soft on border protection because refugees are seen as a security risk. Australia is of course an island in the middle of the Pacific Ocean. Our borders can’t be much more secure. It’s very hard to get to Australia, but that’s the discourse: “who can keep our borders safe from refugees.”

It’s unclear whether the group had any affect on the Australian citizens coming to vote at Australia House, but with coordinated actions occurring in Tokyo, Santiago, Berlin and New York on the same day, it’s hoped the growing weight of international condemnation of Stop the Boats will force a rethink of Australia’s inhumane policies and prevent other nations adopting similarly grotesque strategies to deal with refugees seeking sanctuary.

Linkedin
RELATED ARTICLES
OTHER ARTICLES
An abortion storyteller talks about the termination of her pregnancy and the harassment she’s received for sharing her story online.
Steel City is often overlooked when it comes to the country's cultural radar despite its role in shaping electronic music.
To mark the premiere of his new documentary on surfing giant Gerry Lopez, the filmmaker and former pro skateboarder sits down to share his unique brand of wisdom.
In the latest instalment of Photographers in Conversation, the creator talks portraiture, platforms and taking inspiration from Little Simz.
One year on from the fall of Afghanistan to the Taliban, Tiara Ataii speaks to those who have been forced to make the treacherous journey to Europe for safety, and the barriers and horrors they have faced.
Photographer Bud Glick recounts documenting everyday life in the area, and what it taught him about the Chinese immigrant experience.