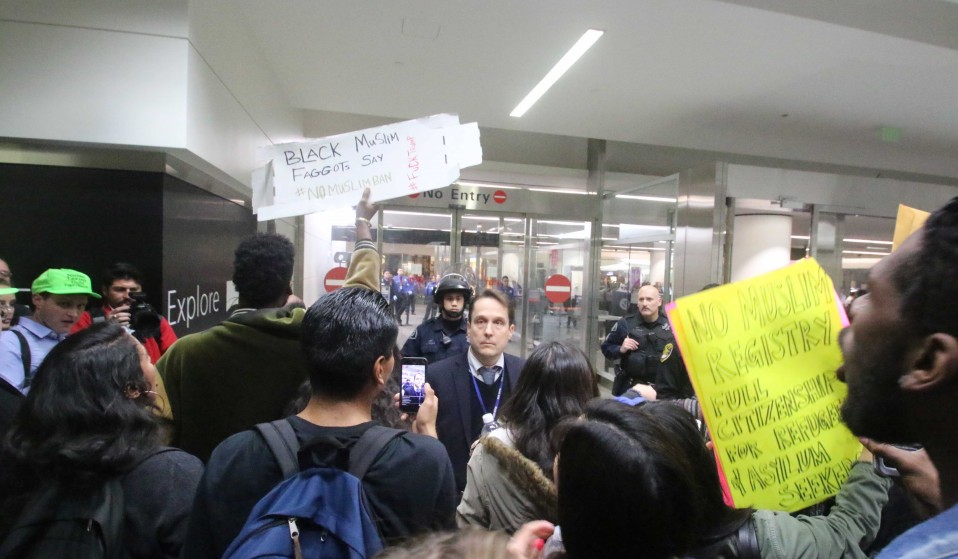 At airports across America, attorneys have been working tirelessly to fight for those worst hit by Trump's Muslim travel ban. Fiona McEntee is one of them.

Deep inside airport terminals across the United States, immigration attorneys have been working tirelessly to fight for those worst hit by Trump's Muslim #travelban. Fiona McEntee is one of them.

Saturday 28 January 2017 was supposed to be like any other Saturday in our Chicago neighbourhood: cold, crisp, and relatively uneventful.

However, this Saturday, something was different.

To give you some context, Chicago has been my adopted home for years having emigrated to the United States from Ireland back in 2005. I’m an attorney here and I’ve been practicing immigration law exclusively for almost 10 years. Little did I know that my boutique practice area would become frontpage news for the foreseeable future.

On the Saturday in question I awoke to an email. Even thinking about it now sends shivers down my spine.

Message: We’ve received word that it is now DHS’ policy to detain with intent to deport all arriving refugees… If you are available to go to your designated airport NOW, fill out this survey indicating your location and I will follow up with an email connecting you to others who will be joining you.

The email was swift and unequivocal and the message was clear – we needed to get to the airport, immediately. The O’Hare Airport Attorneys were connected together and we began communicating: Where should we meet? What should we bring? Offers of lifts began flooding in and we (my brother/colleague and I) picked up to two attorneys that we had never met and carpooled out to the airport.

On the way, we fuelled up on coffee, passion and a determination to fight this unconstitutional #travelban with every fibre of our beings.

To the untrained eye, the arrivals hall in O’Hare may have seemed like “business as usual”.  However to the arriving airport attorneys something different was obvious. Within a few minutes of us getting there we were approached by a young Iranian guy who asked for our help. He explained that he’d come to the airport that morning to greet his sister, brother-in-law and little niece. 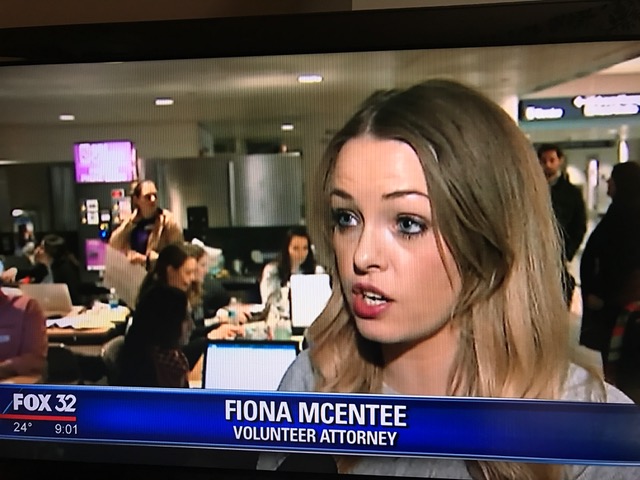 They were green card holders (Lawful Permanent Residents) arriving “home” from a short trip visiting family in Iran. He knew that they had landed hours ago but they had yet to come through the baggage claim. You see, they were mid-air when President Trump signed the #travelban without as much of a second thought about how it would impact these people.

We quickly established an emergency Legal Command Centre and attorneys began doing triage intake with affected clients. It would appear that the Airport Attorneys had become the first responders in the aftermath of the unconstitutional disaster that was, and still is, the #travelban.

The first client I met was an Iranian green card holder who had been anxiously waiting for his wife, also a green card holder, and their 18 month old child, a U.S. citizen. They had been detained by Customs & Border Protection for almost 8 hours. On top of this, despite repeated attempts by me, as their attorney, to gain access or speak to our clients, CBP refused. 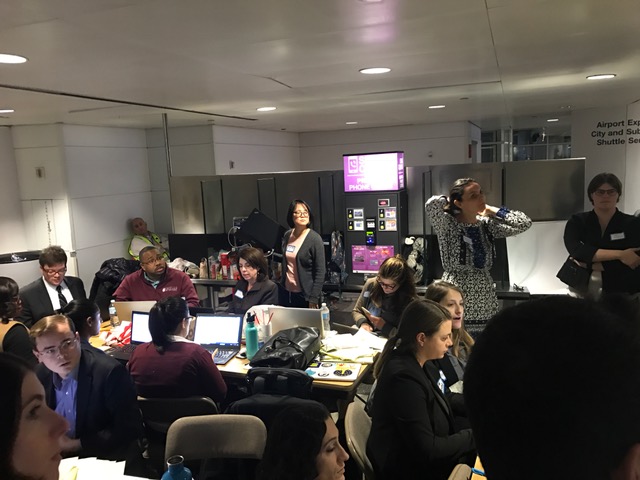 As darkness fell late that evening, we were ecstatic to learn that all 18 of our wrongfully detained clients were released.

The following day, Sunday, DHS (Department of Homeland Security) publicly stated that the #travelban should no longer be applied to green card holders. Additionally, all the while expressing full-fledged support for it, Secretary Kelly (DHS) has since stated that “ I should have, ah, delayed it… just a bit”.  You think?!

President Trump also now claims that he originally wanted to give travellers a month’s notice before implementing the ban however he was overruled by law enforcement. He had previously stated that, had they given notice “the “bad” would rush into our country during that week. A lot of bad “dudes” out there!” Yes, Mr. President, you are correct, these children are “bad” as are these neonatal physicians, cancer researchers, software engineers… bad dudes indeed!

In the days and weeks since #travelban, the Airport Attorneys have been working (pro-bono) around the clock. The makeshift Legal Command Centre has become permanent as has the presence of dedicated protesters, the constant arrival of food/coffee, and the unwavering support of the true spirit of the American people.

As I write this account, the #travelban is far from over – the decision from the 9th Circuit Court of Appeals has upheld the current injunction on #travelban, but Trump’s administration seems determined to keep on fighting. Additionally, the airport attorneys are still preparing and filing lawsuit after lawsuit all over the United States from districts on the east coast to west.

Regardless of notice, or lack thereof, and notwithstanding its now inapplicability to legal permanent residents, we are confident that the  #travelban will be struck down as unconstitutional and this matter will, in all likelihood, go all the way to the Supreme Court.

No matter what happens with the current pending case, until we get the #travelban struck down by the Supreme Court, mark my words, the Airport Attorneys are not going anywhere, not even for “just a bit”.

Fiona McEntee is the Managing Attorney of McEntee Law Group, follow her on Twitter handle. Fiona has been one of the Lead Attorneys at the ORDLawyersHQ, the O’Hare Airport Volunteer Legal/Support Team, since the issuance of the Executive Order, and is a long-standing and proud member of the American Immigration Lawyers Association.

Linkedin
RELATED ARTICLES
OTHER ARTICLES
Members of the collective share some of their reasons to run as part of #UnitedBySummits, a campaign that looks to uncover transformative power of the outdoors.
Over the weekend, London locals came together to resist a pre-planned police raid targeting delivery drivers.
For decades, Wilmslow Road has been a bustling area full of curry houses. But how did it come to be what it is today?
In our first OFFF Dispatch piece, the Arce Studio founder shares her tips on standing out from the crowd.
Photographer Robin Graubard’s debut book offers an unflinching record of turbulence and change across the Balkans.
In the latest OFFF Dispatch, the enigmatic designer dives into his process, connecting the dots between his unique and varied creative output.