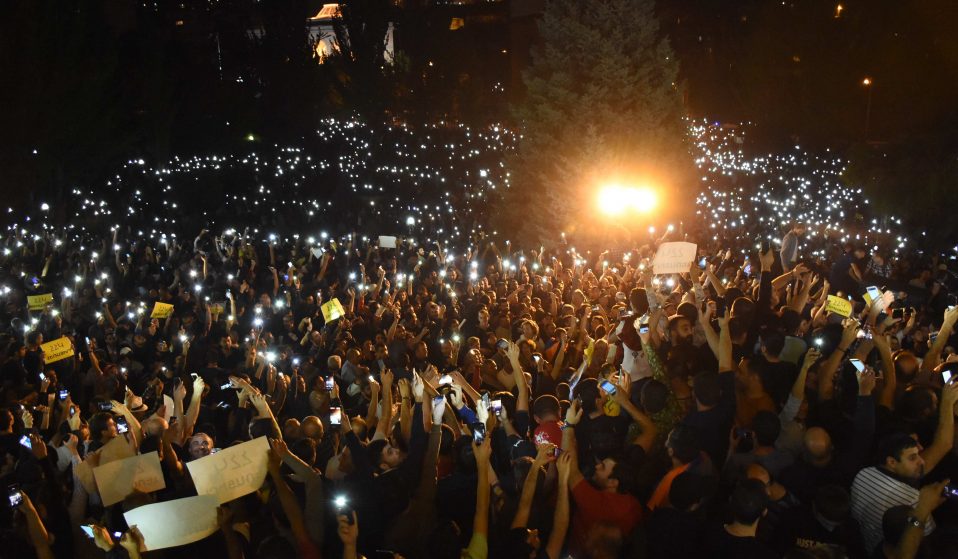 Five months ago, the people of Armenia ousted their Prime Minister in a peaceful revolution – but the future isn't as bright as it promised to be. Journalist Joe Nerssessian joins them in Yerevan as they gear up for more direct action.

Five months ago, the people of Armenia ousted their Prime Minister in a peaceful revolution – but the future isn't as bright as it promised to be. Journalist Joe Nerssessian joins them in Yerevan as they gear up for more direct action.

“He wants us to surround parliament,” yells Armenian student Ashot Khachatryan excitedly on what had been, until that point, a typical Tuesday evening in the country’s capital of Yerevan. Breaking into a light jog, the 25-year-old, who is currently completing a PhD in political science, began to type a rallying cry on Facebook.

The ‘he’ who was urging this direct action is, surprisingly, the nation’s Prime Minister Nikol Pashinyan – a former political prisoner who led the country’s peaceful revolution earlier this year, ending two decades of Republican Party rule.

On Tuesday last week, the ex-journalist posted a video on social media instructing his supporters to demonstrate outside the National Assembly. The demand had followed the passing of a controversial piece of legislation, which aimed to block early elections.

Inside the National Assembly, members of the Republican Party, who enjoyed a firm grip on this small landlocked nation until their astonishing fall from grace in May, had teamed up with two smaller parties to sneak the bill through. It was an attempt at “counter-revolution”, the enraged Pashinyan claimed. 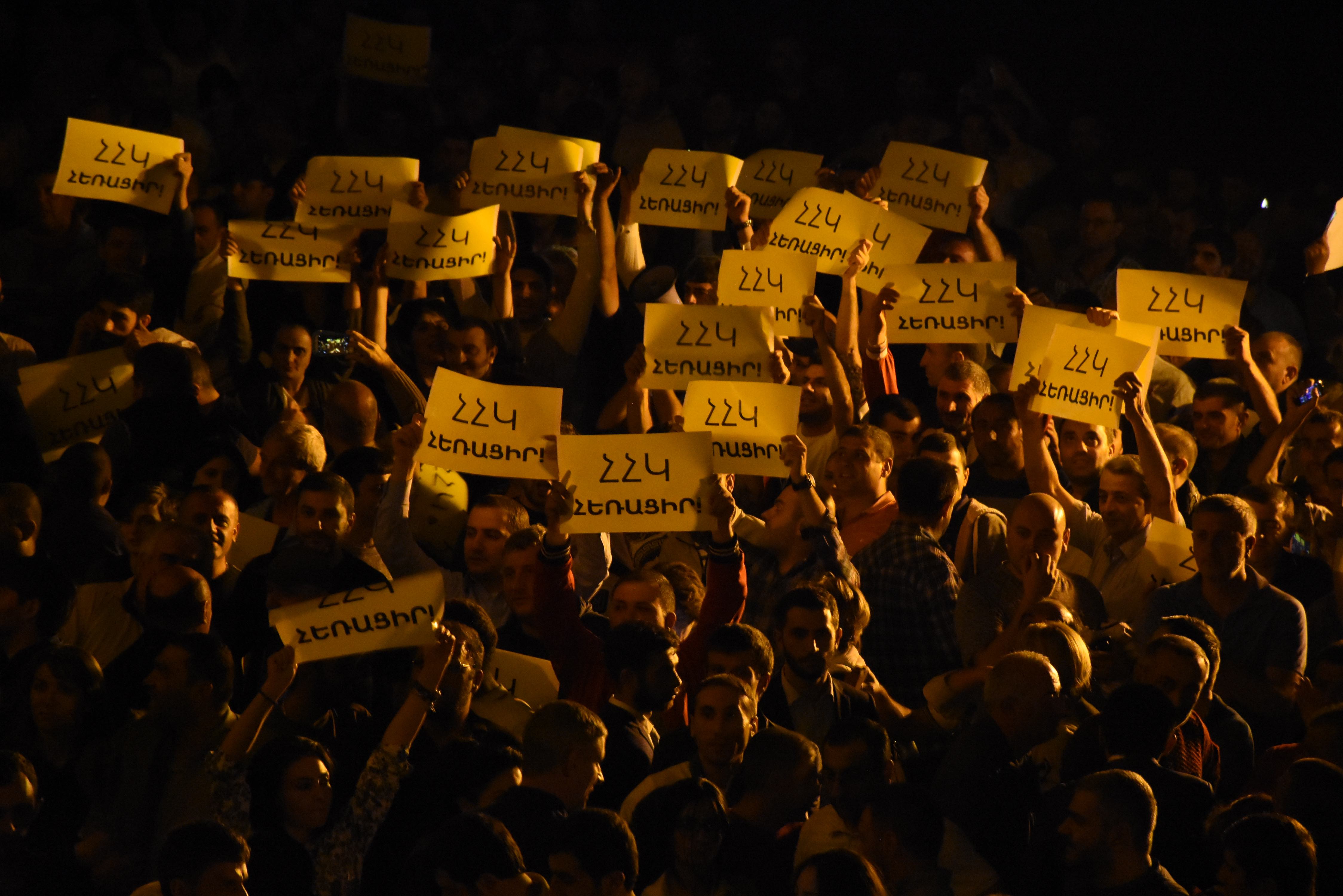 Within ten minutes of the call to protest, a crowd of 30 or 40 had formed. Half an hour later, this number had risen to the thousands. By the time Pashinyan arrived, wearing his trademark baseball cap emblazoned with the word ‘spirit’, more than 50,000 people were blocking the roads.

Children, students, businessmen and pensioners were among those who gathered to hear him speak. Screams greeted his walk through the streets. Nostalgia filled the air. It had been five months since these once-nightly protests last occurred. Back then, this direct action kickstarted the Velvet Revolution, which catapulted Pashinyan to Prime Minister. During those demonstrations against the former administration, protesters not only demanded the resignation of then-leader Serzh Sargsyan, but also the election of a new prime minister and new elections.

While they got the first of those two demands when Pashinyan replaced Sargsyan, the latter currently remains out of reach, as the Republicans continue to retain a majority of MPs in parliament. Last week, they buckled down on their attempts to stop a vote in fear of electoral wipeout after the government’s coalition movement secured a landslide 81 per cent of votes in local elections across Yerevan at the end of September. 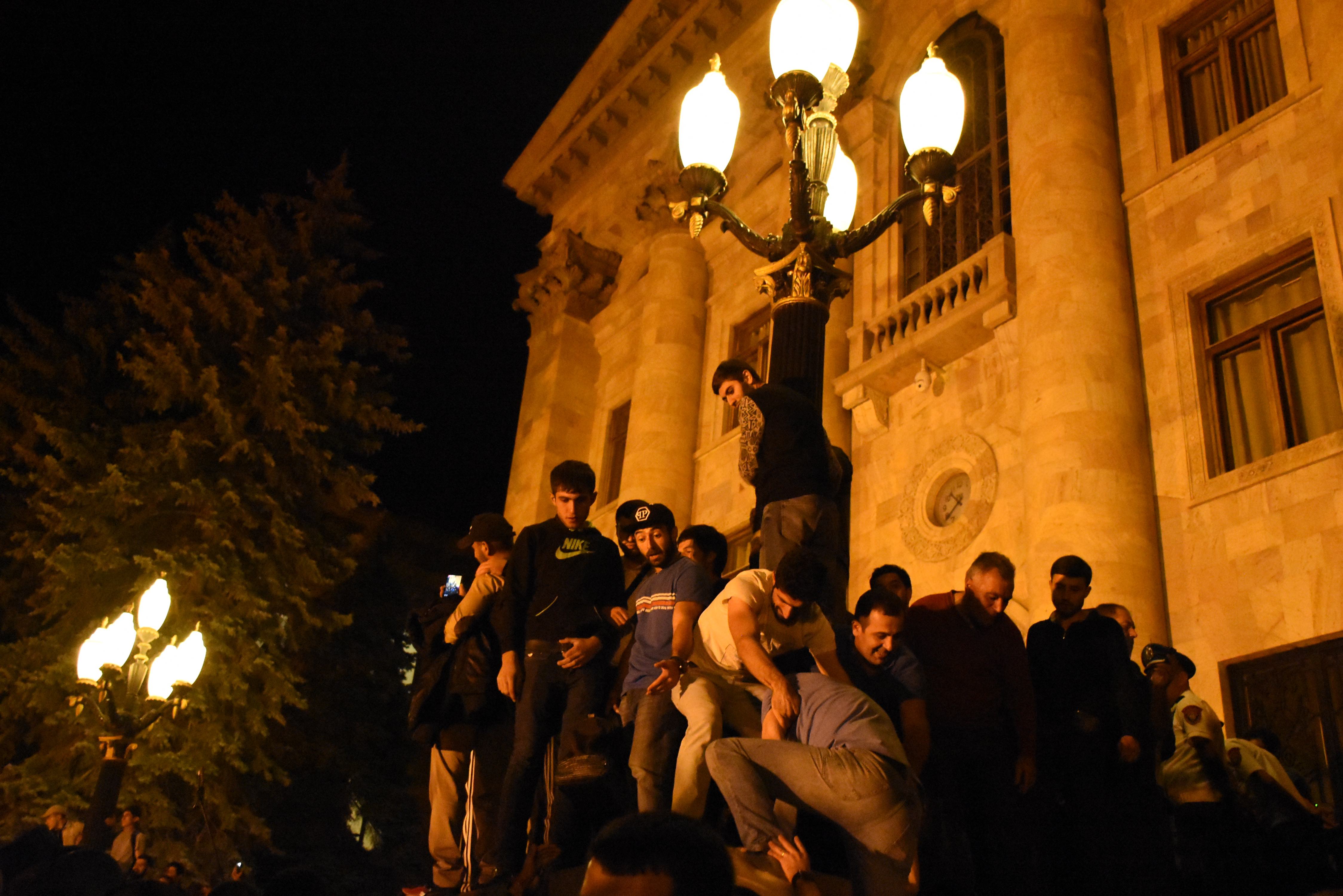 “The revolution changed people’s belief in politics,” explains Khachatryan, who was at the forefront of May’s protests and among the first handful of demonstrators to arrive back on the streets last week. Several friends he was organising with in the spring have since been thrust into power as part of the government’s young and ambitious new cabinet.

He believes the revolution can only truly be deemed successful once the people have gone to the polls, where he expects Pashinyan’s My Step movement to score more than 90 per cent of the vote.

“Just one or two minutes ago he asked us to come here, and now look,” interrupts Levon, a retired 72-year-old, pointing at the swelling crowd. “He has the support of the people.”

After a dramatic speech in which he publicly fired cabinet ministers from parties who had backed the bill, Pashinyan vowed a national vote would take place before the end of the year. In the coming weeks, he is expected to dissolve parliament by resigning in a high-stakes move which relies on opposition MPs either agreeing not to, or being unable to, nominate a replacement. While it may seem odd that the Republicans would abstain from such an opportunity, the potential public fury it would provoke could be enough for Pashinyan to survive with the gamble. 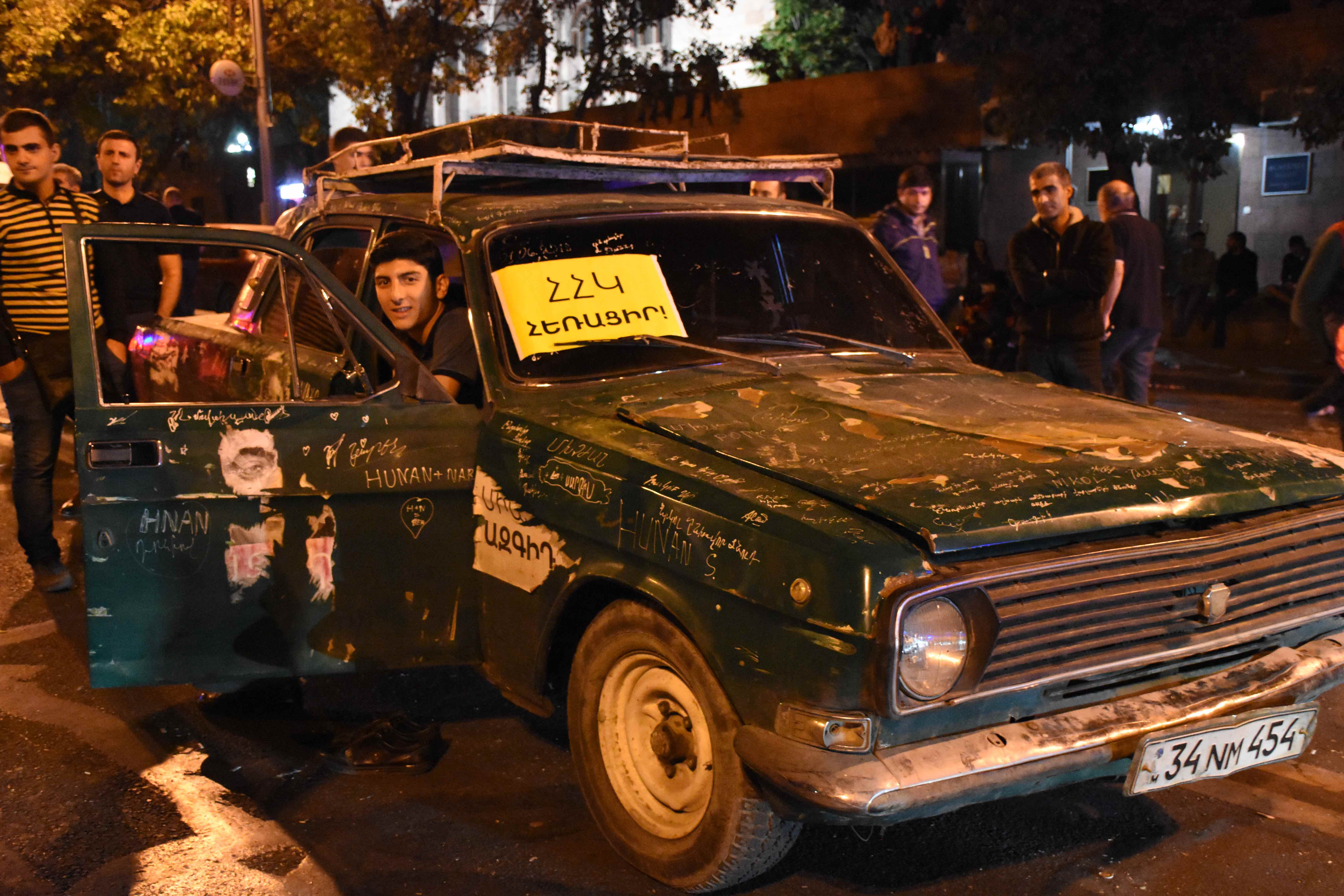 In the streets, Armenians appeared captivated by another night of political upheaval. Car horns, drums, and a version of the Icelandic clap created a cacophony of celebratory anger.

“They are trying to sabotage the revolution,” says 25-year-old Hayk Haruntyunyan, another student who squeezed into the crowd. “The current parliament doesn’t represent the will of the people, it is still dominated by the previous regime. We need elections.”

2018 has certainly not been business as usual for this country of just over three million. The post-revolution government has pursued an anti-corruption programme, leading to the arrest, and pre-trial detention, of ex-president Robert Kocharyan – the first time a head of state of a former Soviet nation has been behind bars.

Police chiefs, businessmen, and former senior politicians have also been implicated in a number of various criminal probes. And this anti-corruption movement doesn’t only belong to the highest echelons of power. School officials, university directors and social workers have been exposed or accused in a tumultuous few months for public officials. 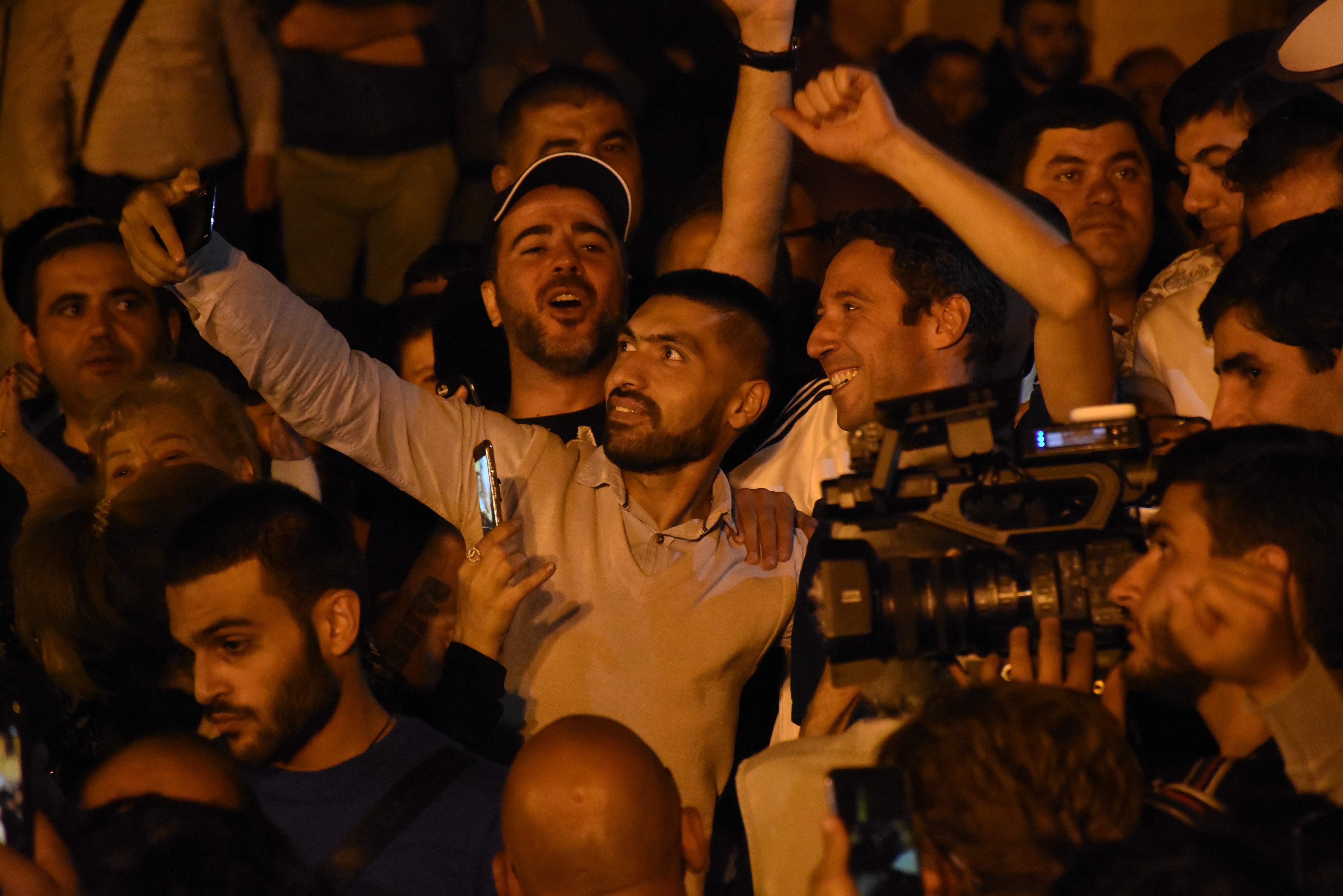 It was an absolute necessity for Pashinyan to tackle corruption head on, according to Dr Nerses Kopalyan, a professor-in-residence of political science at the University of Nevada, and frequent commentator on Armenian politics.

“One cannot make reforms or build anything upon rotten foundations,” Kopalyan says. “Corruption remains the biggest systemic problem facing Armenian society, and in this context, if Pashinyan does not alleviate this problem, then both his tenure as PM will be a failure as well as the survival of the Velvet Revolution.”

While the anti-corruption measures have been the government’s main focus, post-revolution Armenia has also had its first ever visit from German Chancellor Angela Merkel, is emboldened with its relations towards Russia, and will welcome world leaders Emmanuel Macron and Justin Trudeau this month.

The world is certainly watching, as was evident in September when United Nations secretary-general Antonio Guterres chose to hail the revolution as one of the “winds of hope” in a time of global chaos and confusion during his opening remarks at the UN General Assembly.

“Our country is experiencing one of the biggest political transformations in the world,” agrees Khachatryan, before insisting the struggle to see off those who have been conditioned to expect power continues. “We are being watched,” he enthuses. “That is a motivation, a pressure to succeed. We don’t have any choice. If we don’t the end of our state would be near. This revolution has to be completed successfully.” 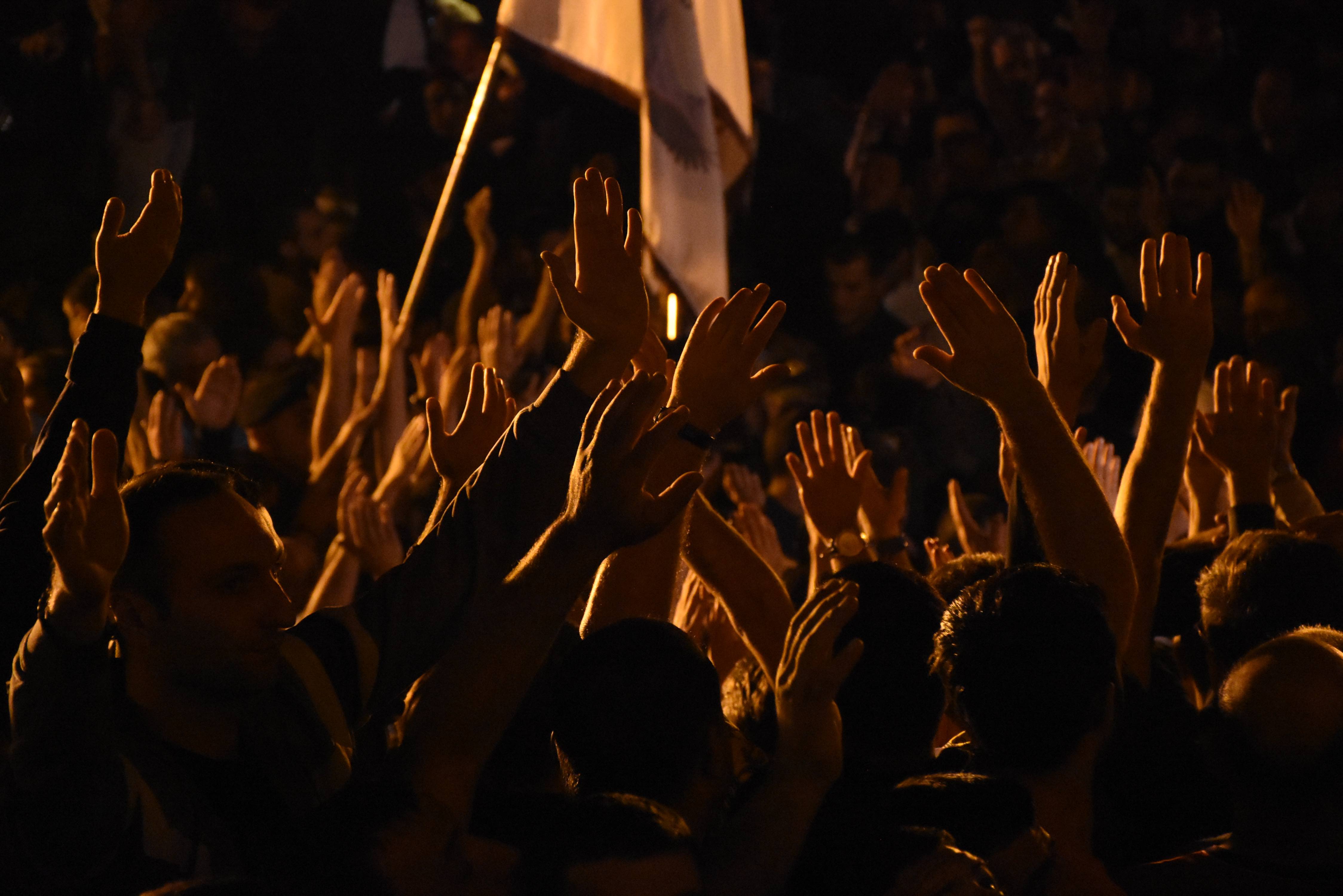 Linkedin
RELATED ARTICLES
OTHER ARTICLES
While protests over abortion rights rage in the US, access to abortion services is still almost nonexistent in parts of the UK.
The author discusses her blistering new novel about history, revolution and queer love.
After news broke last week around an expected reversal of the 1973 landmark law that made abortion legal in the US, protestors gathered in the UK in support of American women.
Following the release of his newly republished 1991 book, Redheads, the American photographer reflects on his celebration of ginger people and their magnetic power.
Over the weekend, London locals came together to resist a pre-planned police raid targeting delivery drivers.
The revered showbiz chronicler recalls his journalistic beginnings, documenting subcultural scraps in the ’80s.