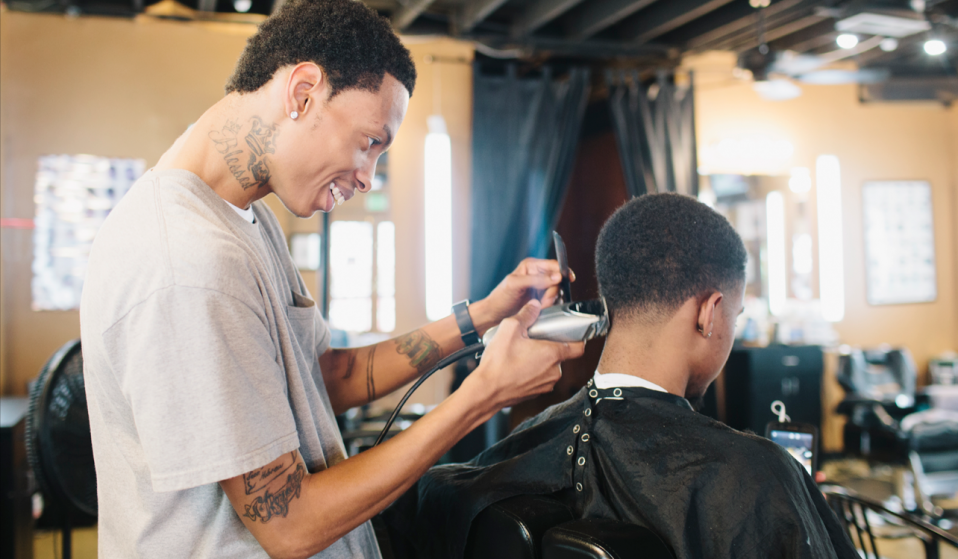 ATL, Georgia. A-Town. Alpha city. A skyline of booming business in the belly of America’s Deep South. But Atlanta’s more than just briefcases and Benjamins. Having launched the first country music recording artists in the 1920s and 1930s, Atlanta came into its own in the 1980s and 1990s nurturing iconic indie-rock artists like Cat Power and Benjamin Smoke, and a rap scene that The New York Times in 2009 called ‘Hip hop’s centre of gravity,’ featuring everyone from OGs Outkast, Ludacris and Usher to new trap stars Gucci Mane, Waka Flocka Flame and 2 Chainz.

If hip hop is the lifeblood of Atlanta then the little barbershops that prop up every main street in the metropolis are the valves that pump the trill shit around. It’s no wonder Atlanta barbershops have art on the walls, mix CDs on the shelves and tunes pumping out the speakers till the early hours. There’s art everywhere because Atlanta barbers are artists, too. At the centre of their communities, barbershops are a democratic space for all types of people to hang, share and discuss all kinds of culture, and the barbers are the guardians of the good vibes.

Atlanta-based documentary photographer Kendrick Brinson has been shooting the Southern hip hop scene for a good couple of years and knows the barbershops that, like a fresh fade, leave a lasting impression on the local clientele. As one customer Scotty Gordon in the Anytime Cutz barbershop put it: “You can’t switch up barbers too often. You can’t trust just anyone with your head.” 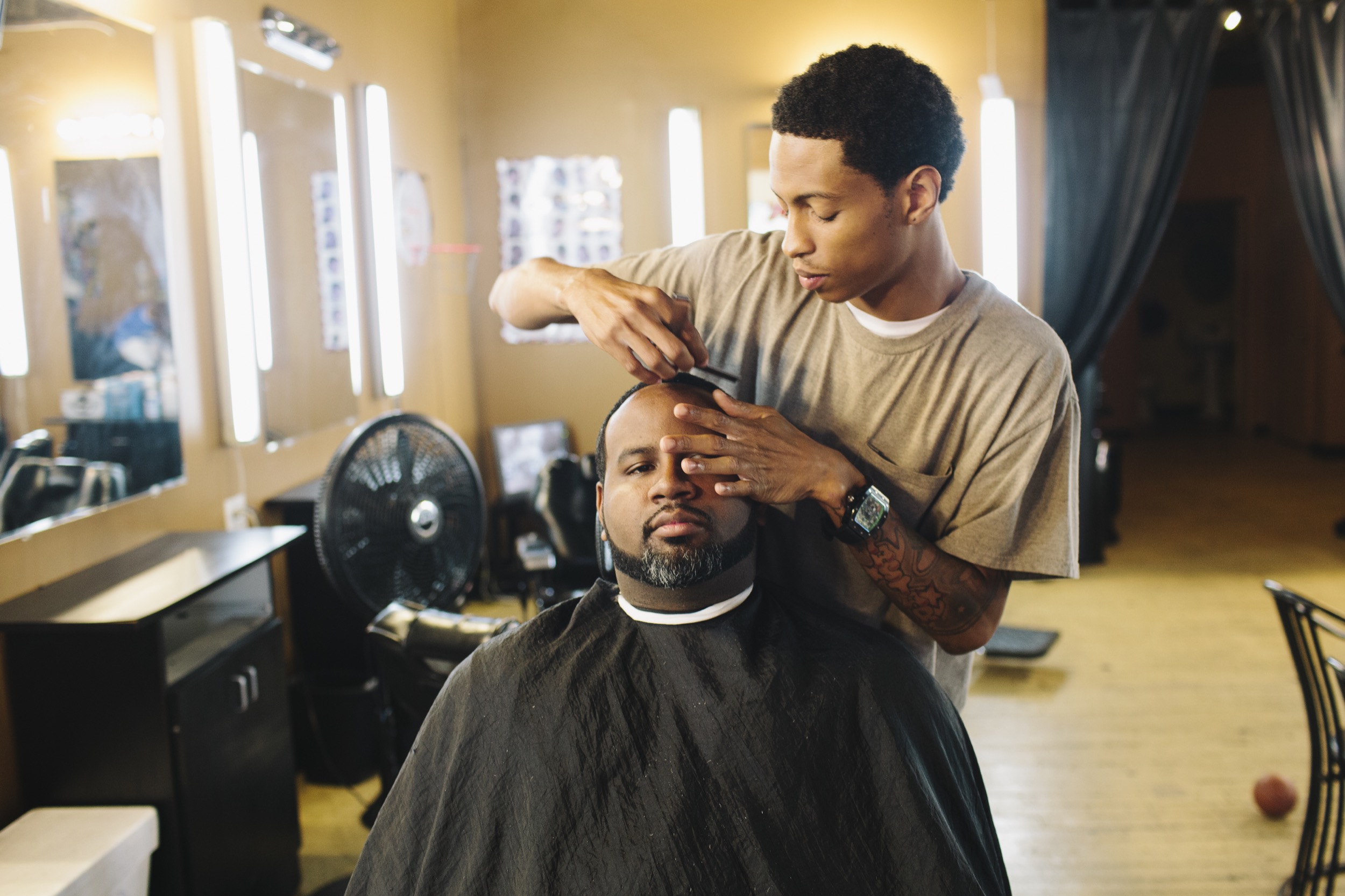 All Star Stylez shares a parking lot with a popular corner store and gas station that sits at the entrance of East Atlanta Village, an edgy neighbourhood with bars and boutiques. You can often hear hip hop music from inside the shop while pumping gas outside. “I’ve been a barber for almost fifteen years and always wanted to have my own shop,” says owner Alan Skipworth, who’s now forty. “All walks of life, professionals and non-professionals, come in here. Whoever wants to come in and look good and feel good about themselves, this is the spot to come to… I’m hip hop old school. Everything I do has that mindset. Hip hop artists come in here and perform, artists do graffiti on the wall outside, the music is playing in here – that’s what I grew up on.” 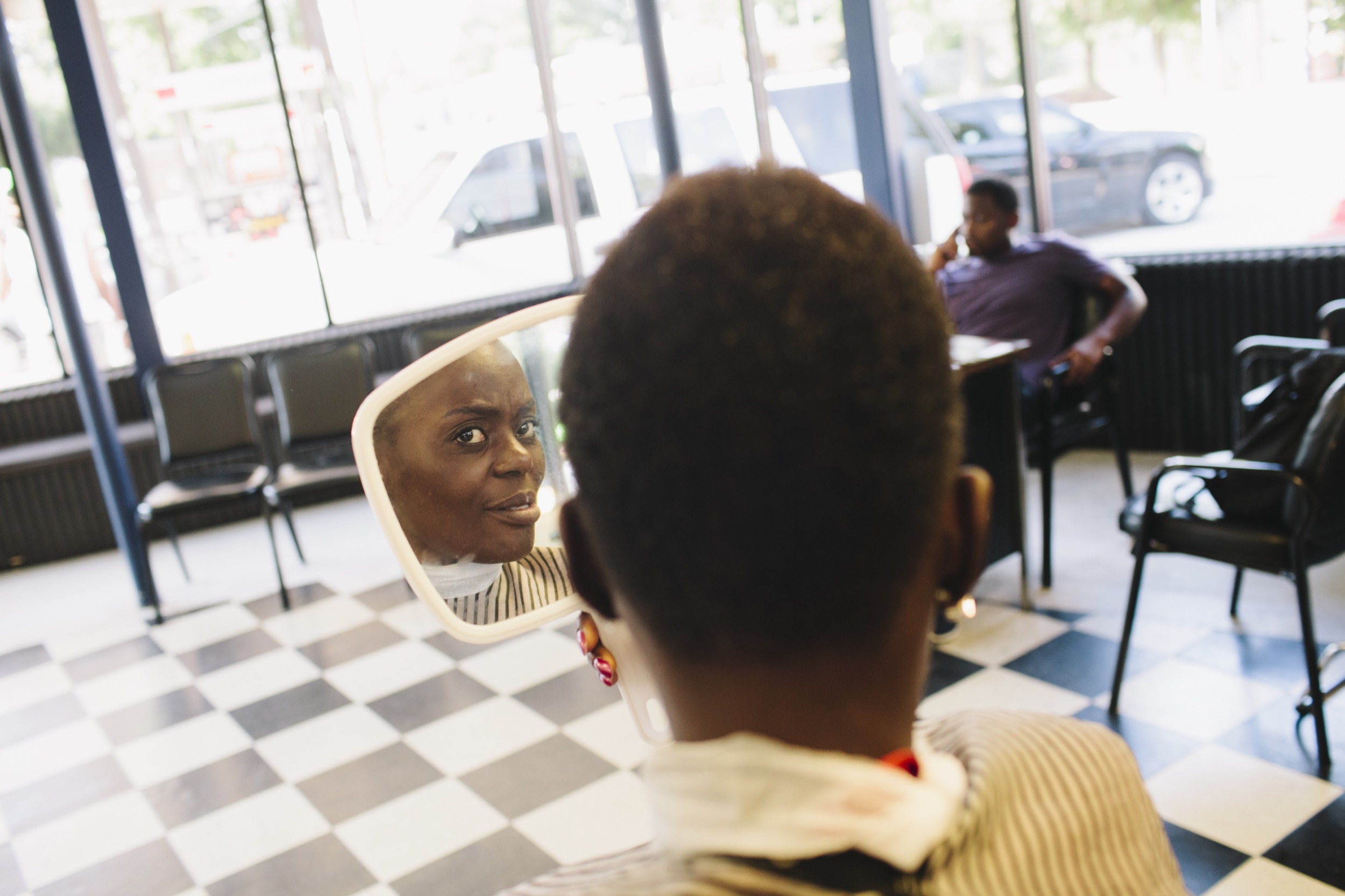 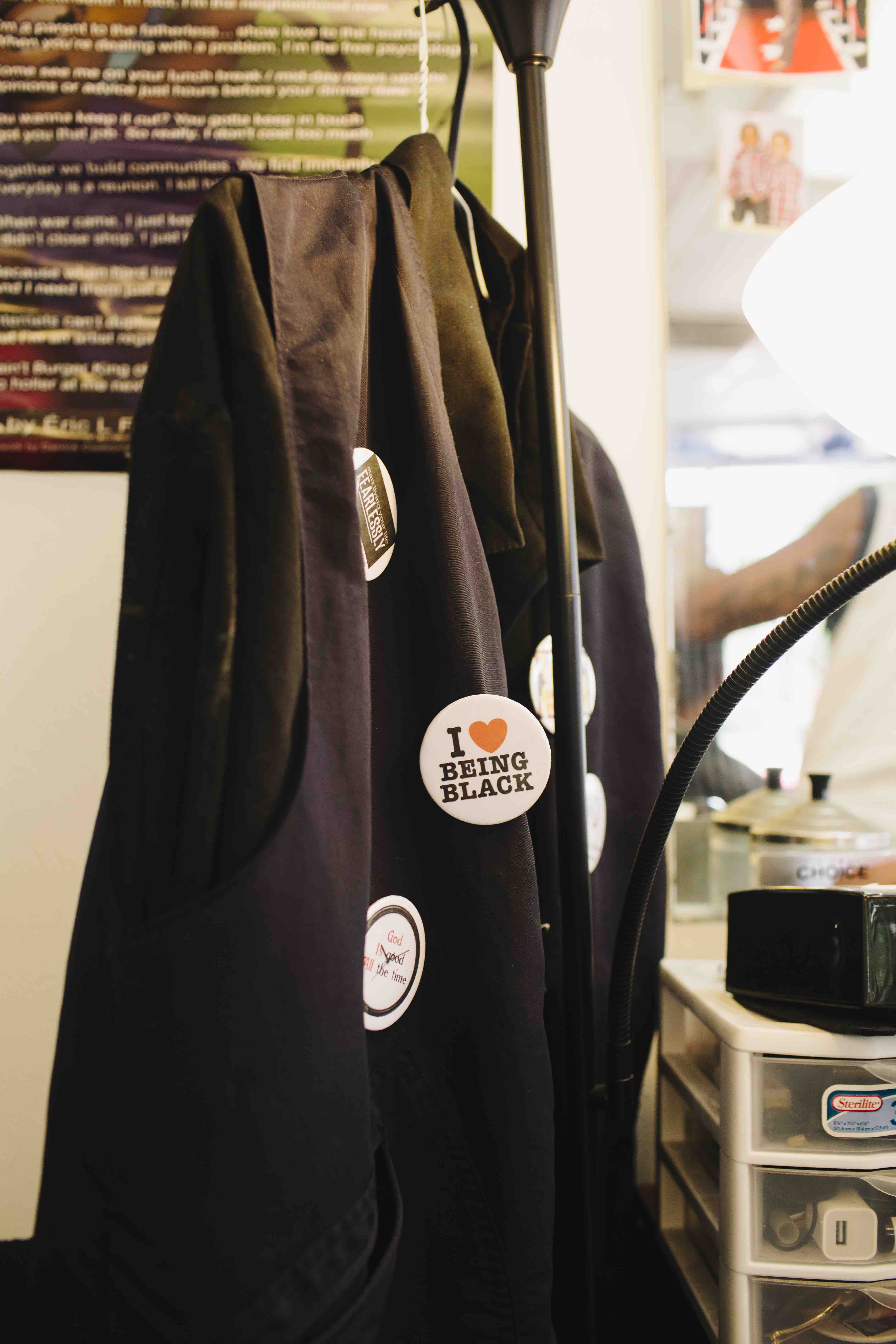 The shop is outfitted in a classic style with black and white checkered tiles on the floor, royal blue 3D stars on the ceiling above the waiting area and four barber stalls all neatly organised in a row, with some photos of children taped to the mirror. Most barbers rent their own chairs and work for themselves so each stall is like its own little world. “My thing with cutting hair is I love the immediate response of appreciation,” says barber Rambo Young, who’s thirty. “It motivates me to be creative and on point for the next customer. A client can come in after a hard day’s work and be comfortable and not have to explain what they want. Sitting in a barber chair after you get off work is a process you can’t really explain.” 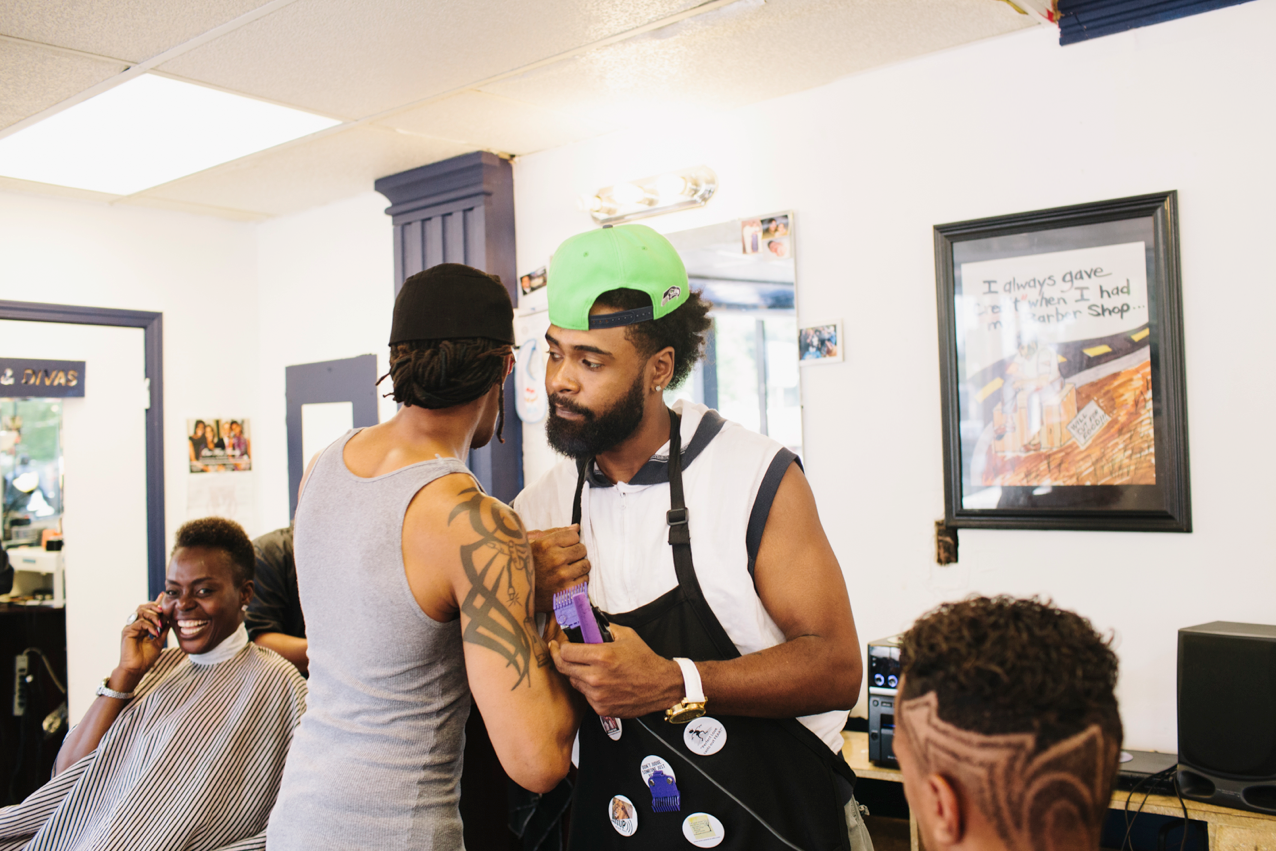 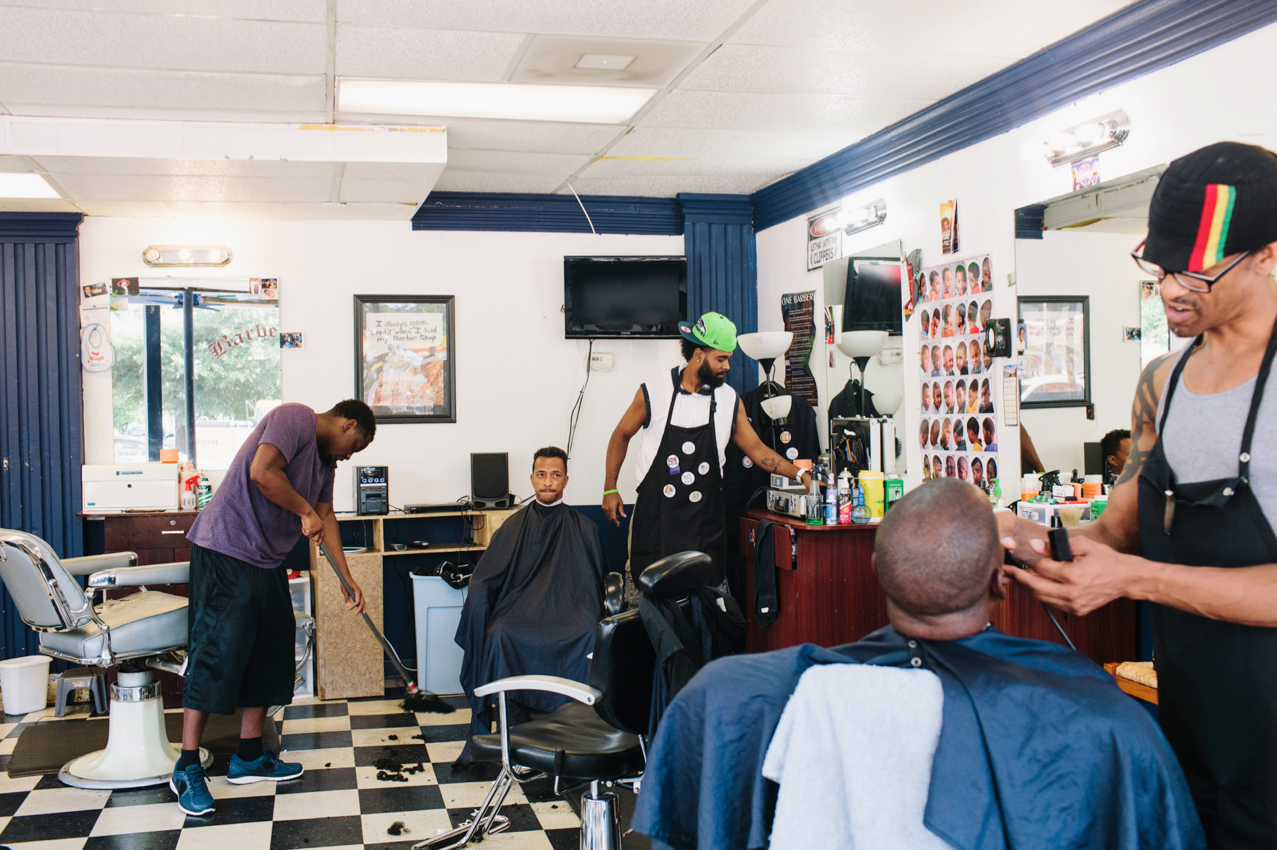 Located on Bennett Street in wealthy uptown district Buckhead – an area known for its fine art and antiques – is Anytime Cutz, a barbershop open twenty-four hours a day, seven days a week. “People come here before they go out,” says thirty-one-year-old barber Will Jackson. “This is a ‘before and after’ spot. It’s kind of like the party before the party. I’ve been doing this since I was sixteen. It’s a part of me, I guess. I’m kind of an artist. I like to make people look good.” 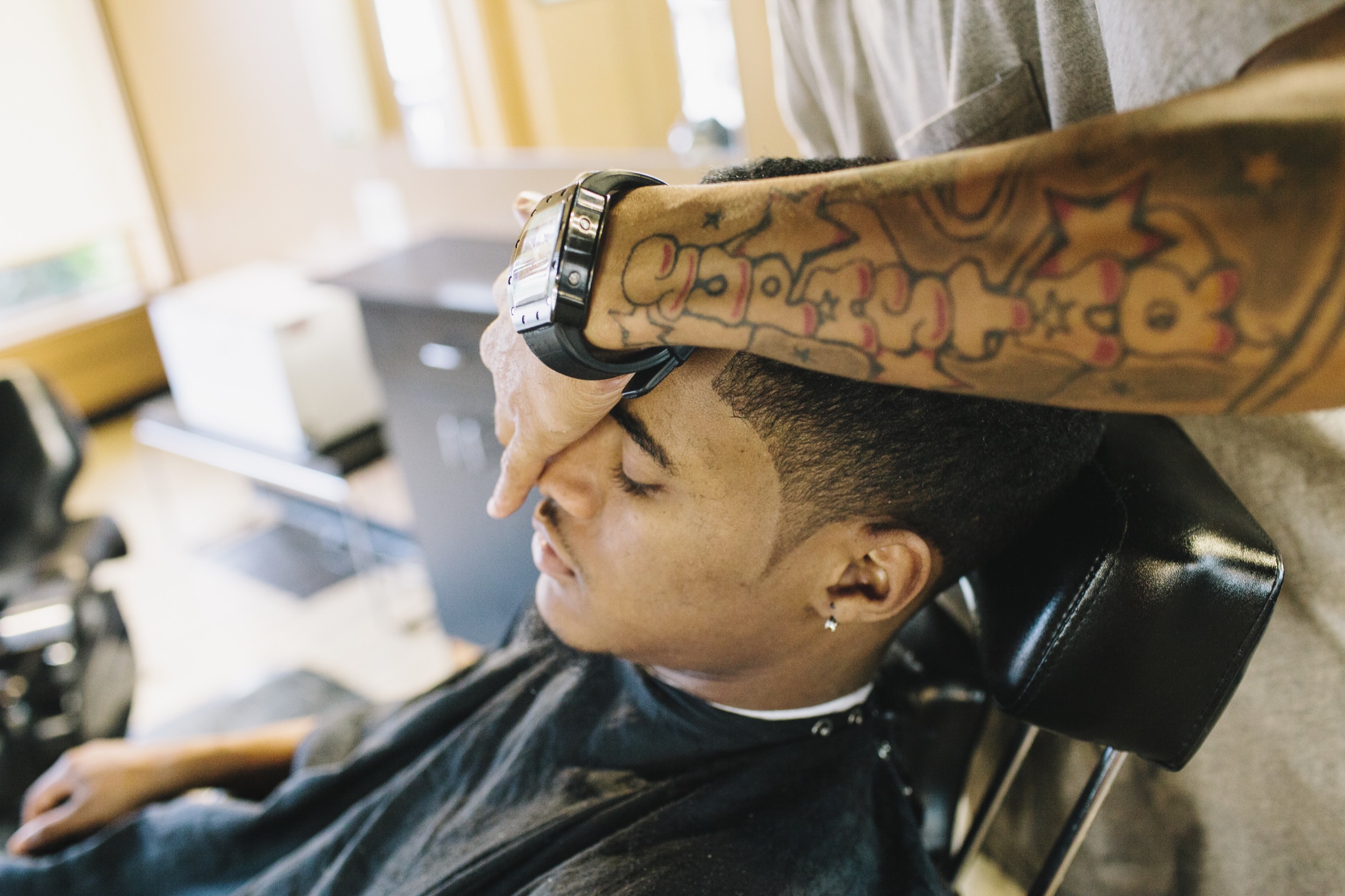 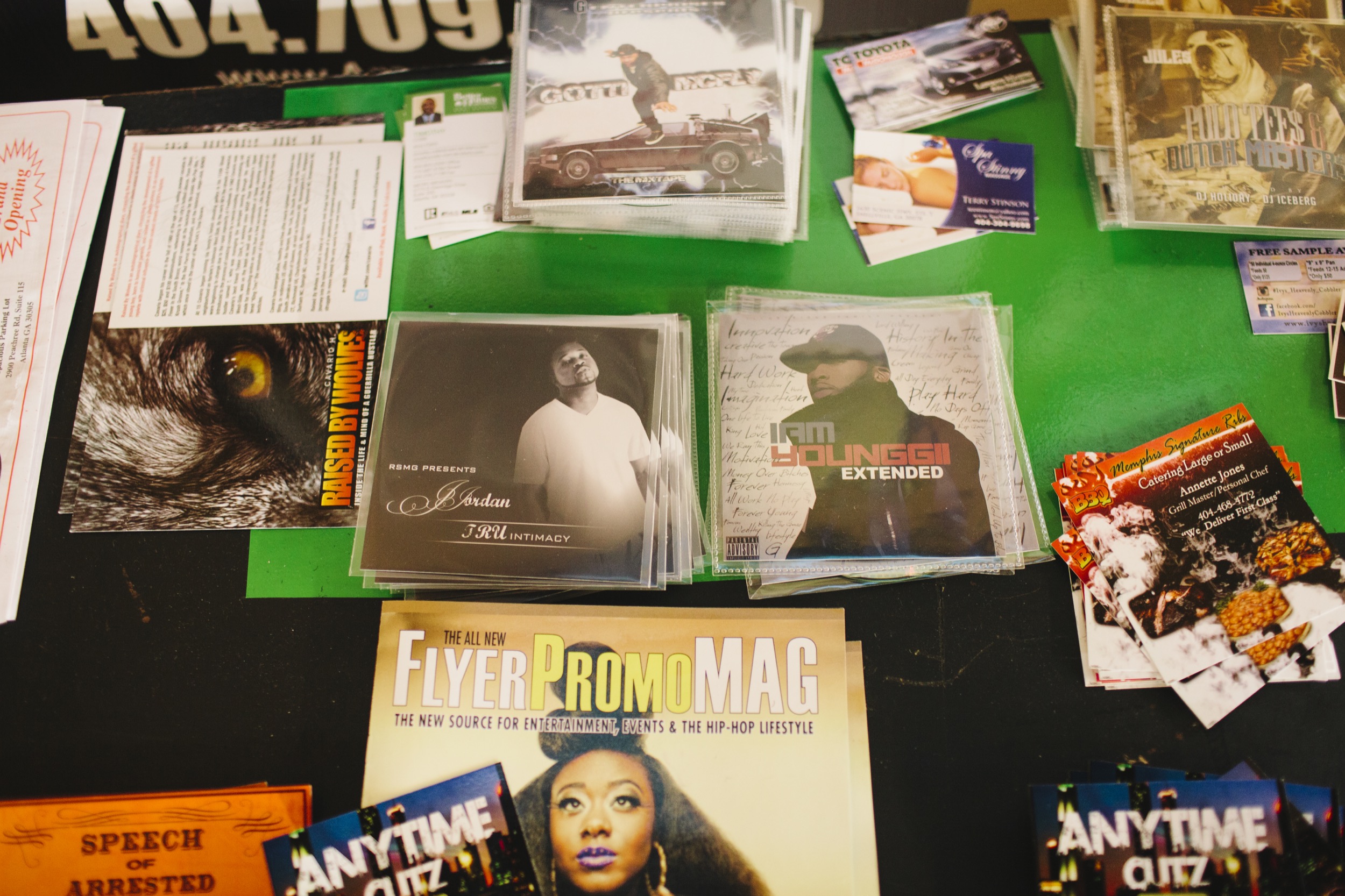 Rap music plays from a corner boombox and two big screen televisions mounted above the shop mirrors play football. There’s a couch in a corner, where a shop regular is napping after a shave. The posters on the walls are grids of popular fades and styles for customers to choose from. As Cavario Hunter, senior editor of Hip-Hop Weekly magazine, told The New York Times: “Everybody comes here. Sometimes we don’t even text or call our friends. We just come down here to find out what’s going on tonight.” 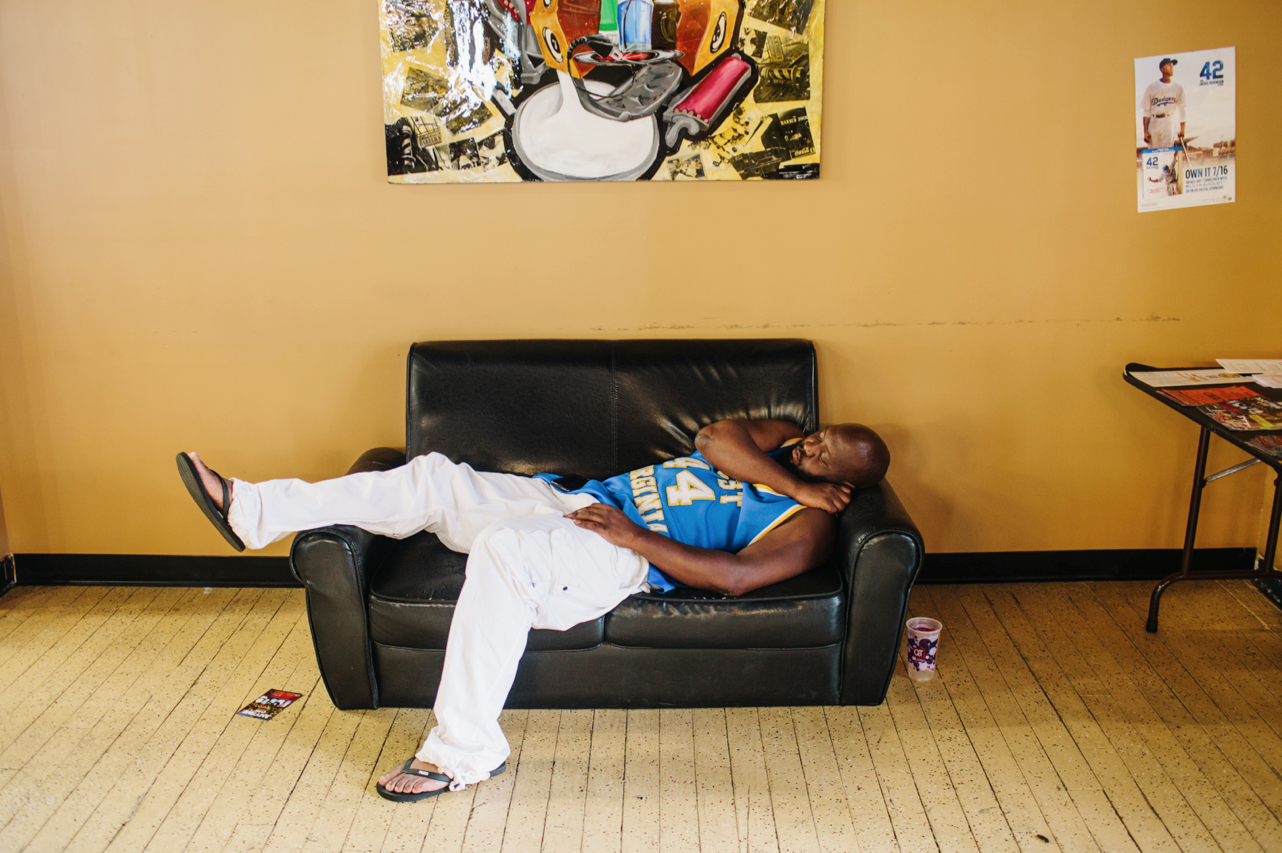 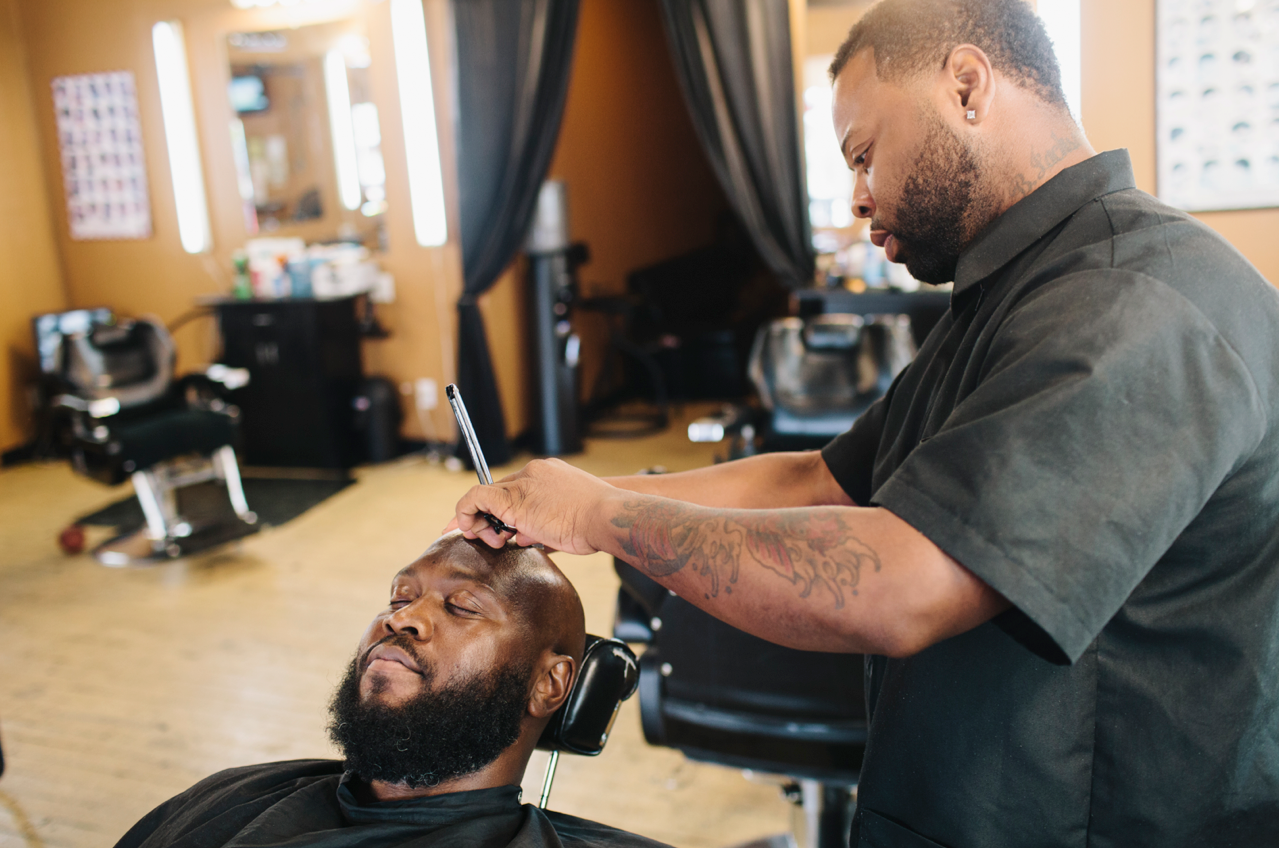 On the south side of Atlanta sits Graffitis SWAG (wash, shave, groom) – a rad little barber’s owned by Grammy-winning rapper Killer Mike. Once a week the shop hosts Hustlerholic Radio, an internet radio show that people call into from all over the country. “We have a lot of artists come in here instead of going to radio stations,” says barber Adonnis ‘Quik’ Davis, thirty-six. “They bring their music here to the people.” 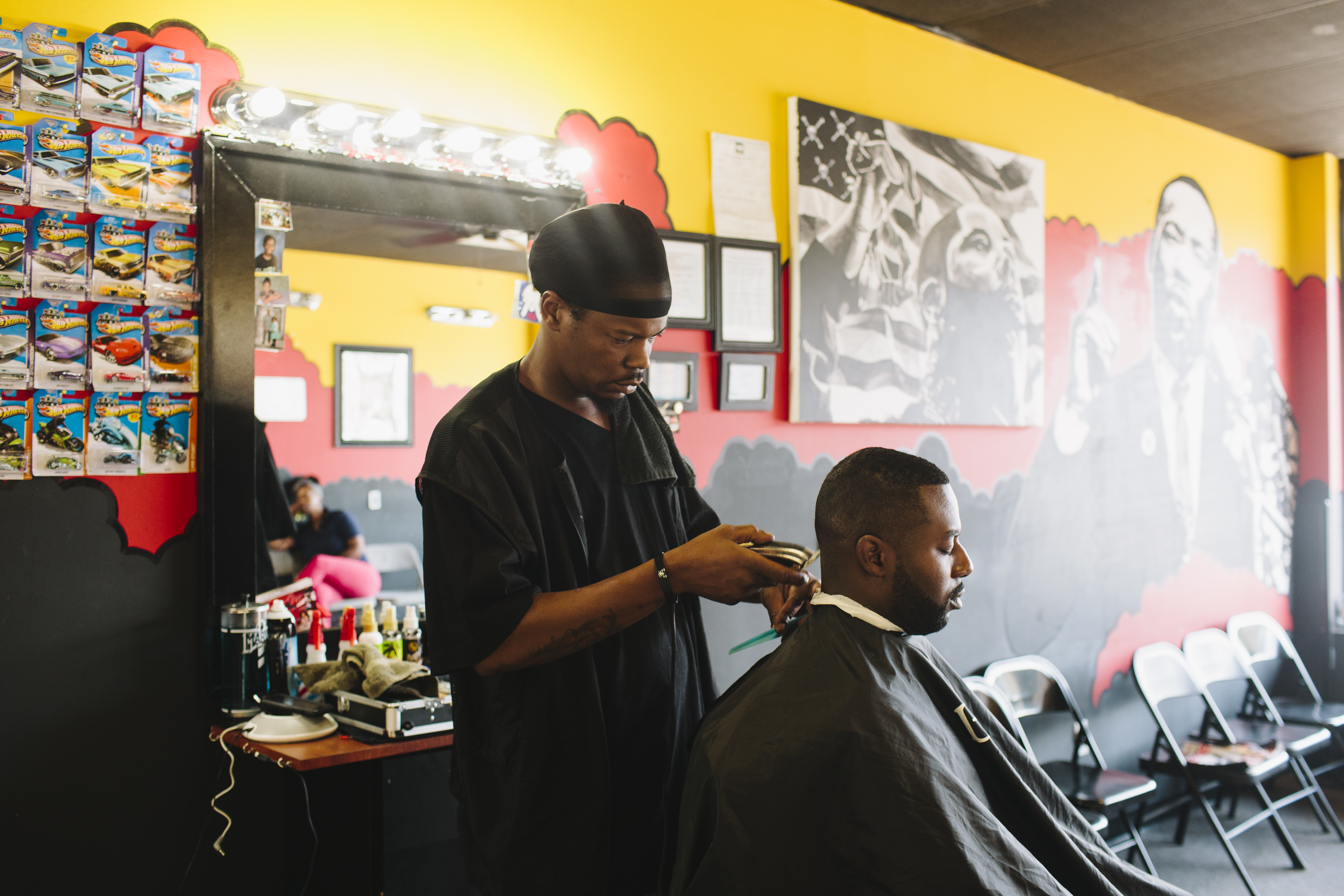 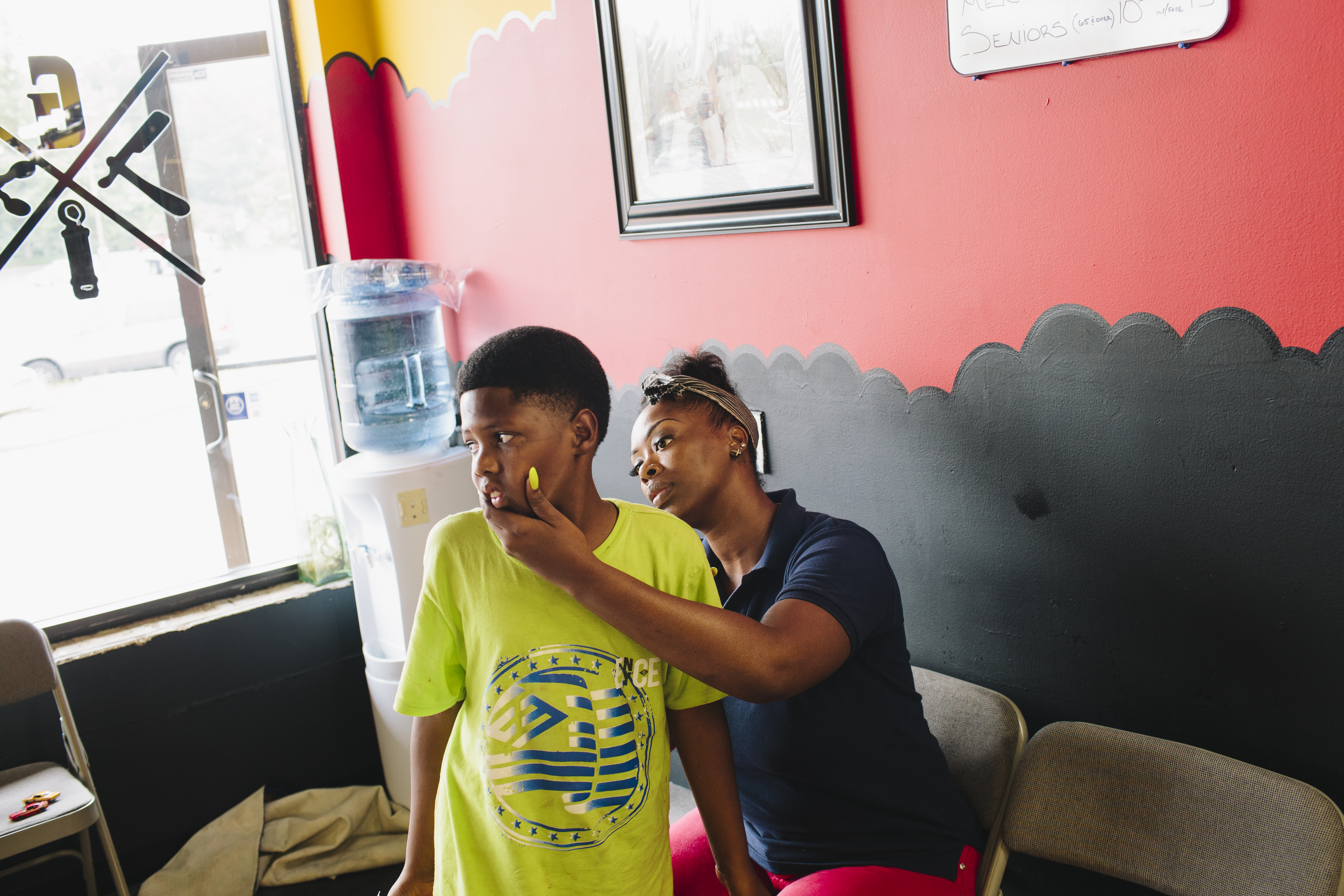 Graffitis SWAG’s walls are covered in art by Atlanta painters, graffiti artists and photographers. The shelves meanwhile are lined with Hot Wheels cars. The collectible miniature cars are given to the young boys who have their hair cut in the shop. Elijah Wiley, six, who’s getting a spiral design shaved into his hair by Kent the barber, spends a lot of time debating which toy car he wants to take home with him before settling on a tiny Camaro. “We give Hot Wheels to our kids instead of candy,” says barber Kent Mosley, thirty-nine. “Barbershops back in the day used to give kids a sucker. It’s a win-win – healthier for the kids and they can keep it.”

On a table in the corner sits a stack of mixtape CDs that customers are free to take with them when they leave. For Kent, the shop is all about community. “Barbershops have always been a place for men to be men,” he says. “A lot of people come to reflect on different things that might be going on in their life. I love the atmosphere, the camaraderie.” 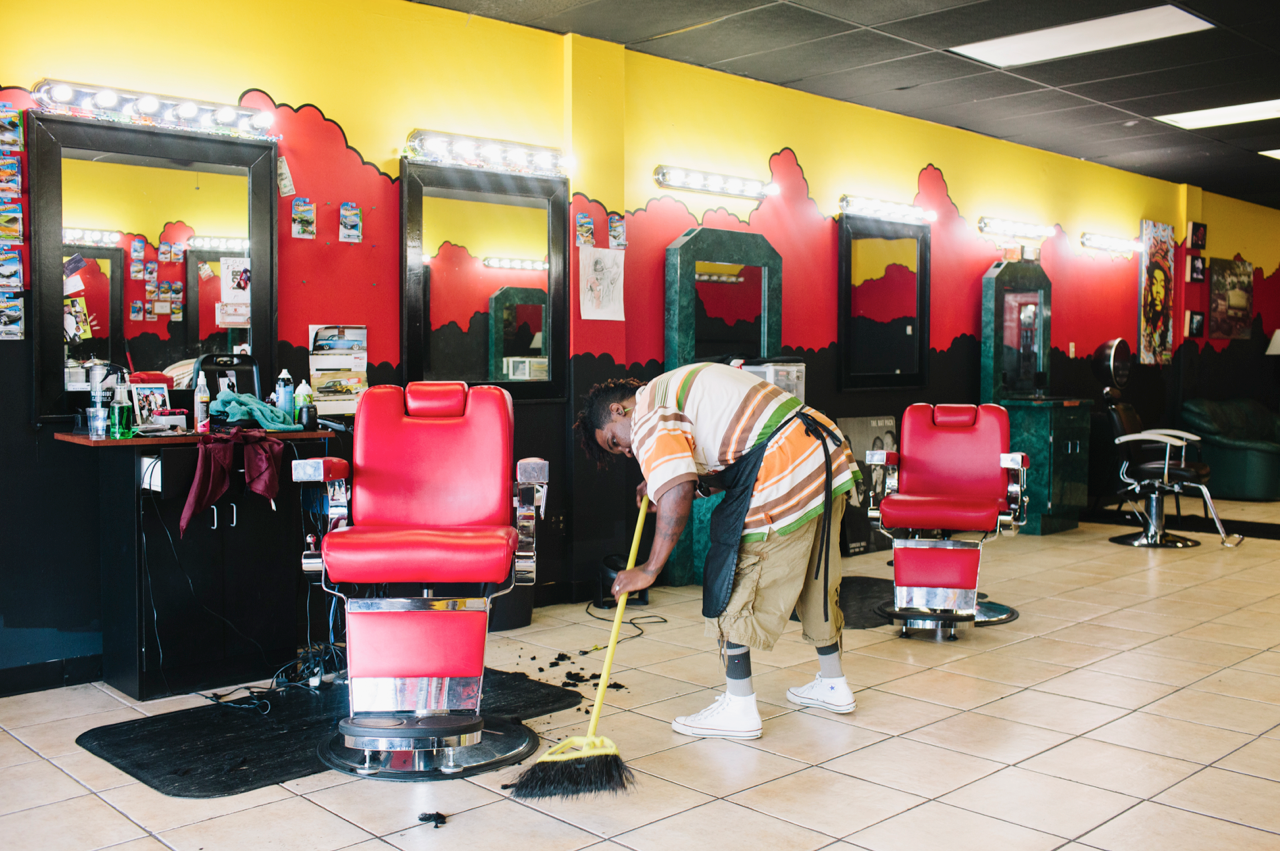 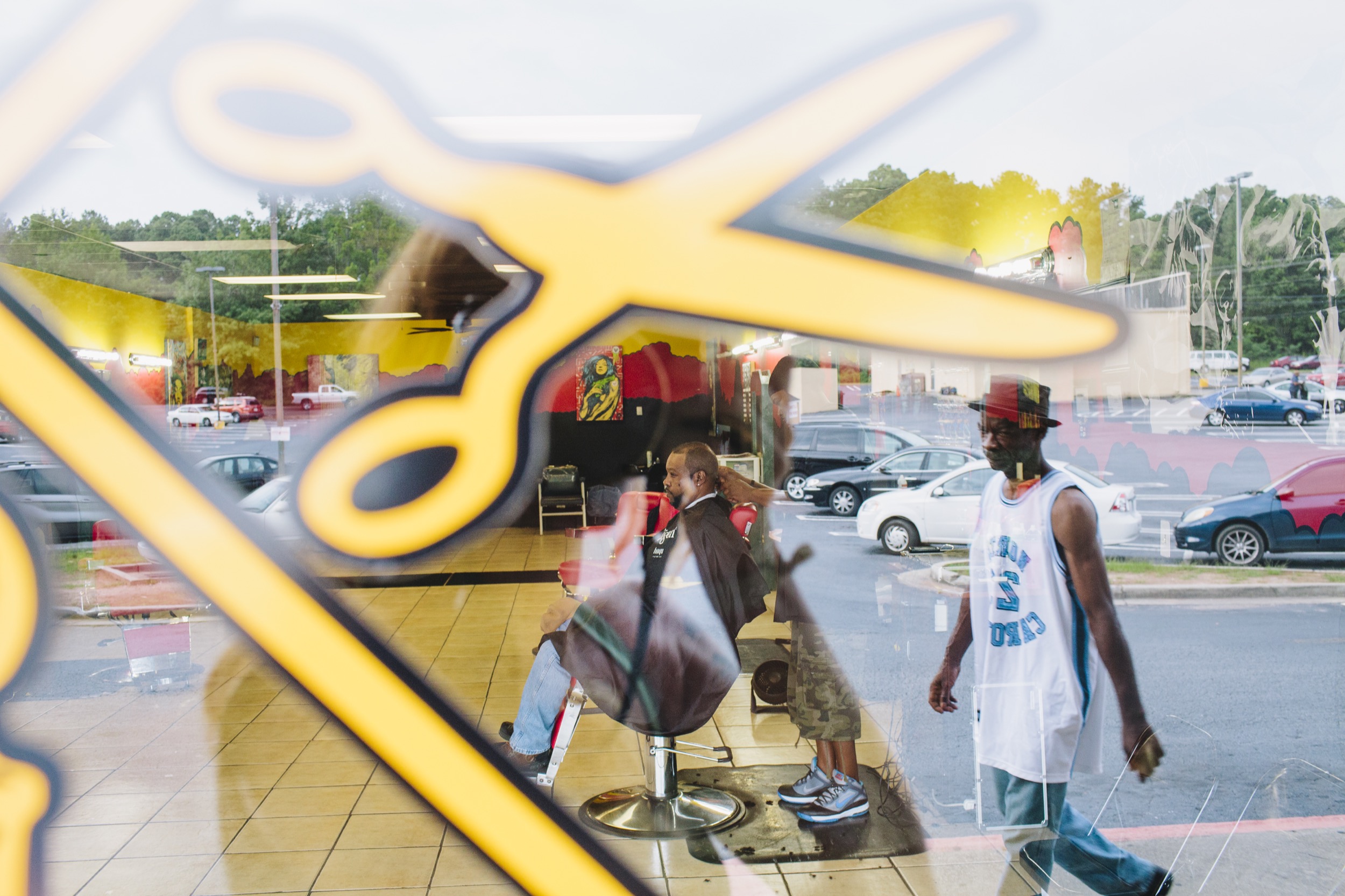 This article originally appeared in Huck 40 – The Cat Power issue. Subscribe to Huck today to make sure you never miss another issue.

Linkedin
RELATED ARTICLES
OTHER ARTICLES
Across Britain, a new generation of outspoken young rappers are interweaving Islam and hip hop to create a lyrical tapestry that’s all their own.
To celebrate 10 years of Huck, we're digging through the archives to unearth stories that feel as relevant as ever. When photographer Janette Beckman started documenting underground communities in the US, she had no idea it would change youth culture forever.
Nas walked through hell and back to put out Illmatic, the record that cast 1994 as hip hop's most epic year. But do his words still resonate two decades down the line?
HUCK spends a day with the relentlessly exuberant UK rapper.
HUCK meets the fast-spitting, shit-talking, rap-battling emcees who come armed with words and ready for war.
Can anyone learn soul and what it means to ‘feel’ the beat? For the lockers, poppers and b-boys of Japan, perfection is as sacred as it gets.