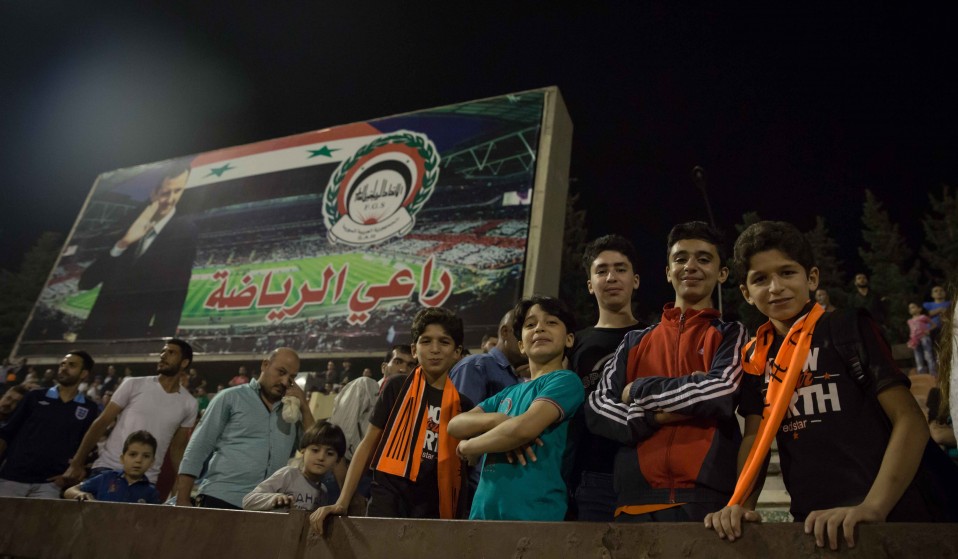 In a country torn apart by civil war, people are grasping for moments of relief – and football is one thing they turn to. It's also been weaponised and politicised, as photojournalist Sally Hayden grapples with at the Syrian Cup Final.

In a country torn apart by civil war, people are grasping for moments of relief – and football is one thing they turn to. It's also been weaponised and politicised, as photojournalist Sally Hayden grapples with at the Syrian Cup Final.

In October, I photographed the Syrian Football Cup final in Damascus’s Tishreen Stadium, situated in one of the growing areas of the country controlled by the government.

It was a Friday evening and the fans seemed somewhat incredulous: for years, crowds haven’t gathered for big events for fear of violence. Teams – when they did play – often matched off alone.

This time, there were thousands in the stalls; while on the pitch were Al-Wahda from Damascus, and Al-Karamah from Homs. The latter’s supporters braved checkpoints along the roads, travelling 100 miles in buses to the capital.

Like everything else in Syria, football has been politicised and weaponised by the war. Last year, ESPN reported that the Syrian government had murdered nearly 40 players from the top two divisions of the Syrian professional leagues. Stadiums have been used as military bases and players forced to demonstrate their loyalty to the regime in a manner that’s used as propaganda. 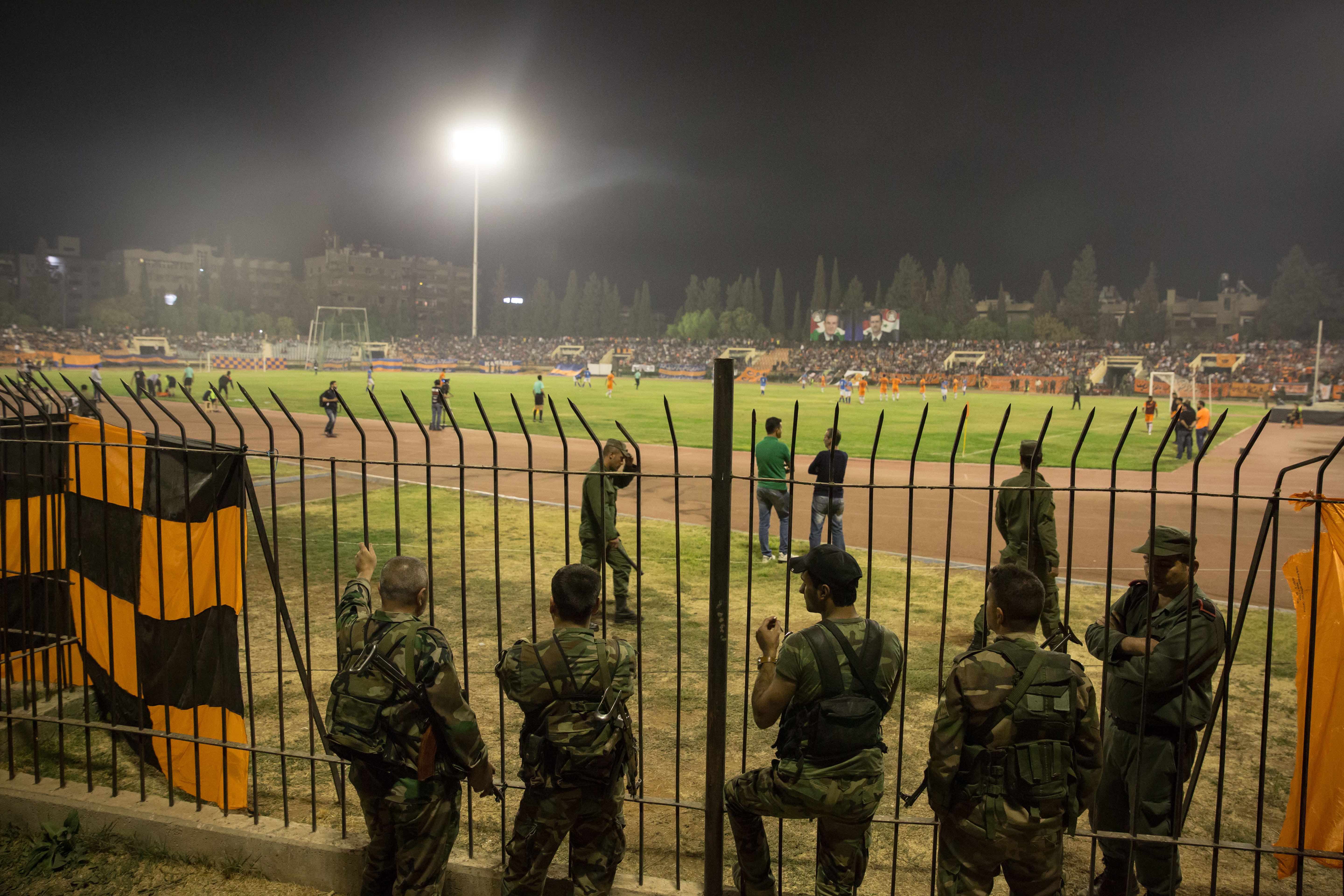 Soldiers line the pitch during the Syrian Cup final. Some also stood in the crowd, watching out for security breaches.

Last year, there was a commotion online when national team captain Firas Al-Khatib, who had refused to represent Syria for years, eventually relented ahead of the 2018 World Cup playoffs. His sacrifice – part of a gripping bid to make it to Russia this summer – didn’t pay off and the team was knocked out. The games divided the opposition. Some said the players represented all Syrians, while others called it the “barrel team,” in a reference to brutal barrel bombing in opposition-held areas.

Billboards showing Khatib were still dotted around Damascus when I attended my first Syrian football match, shortly after I arrived in the country. Despite the underlying tensions and the soldiers lining the pitch, my photos show an evening with a certain normality, in a war that won’t be over for a long time. 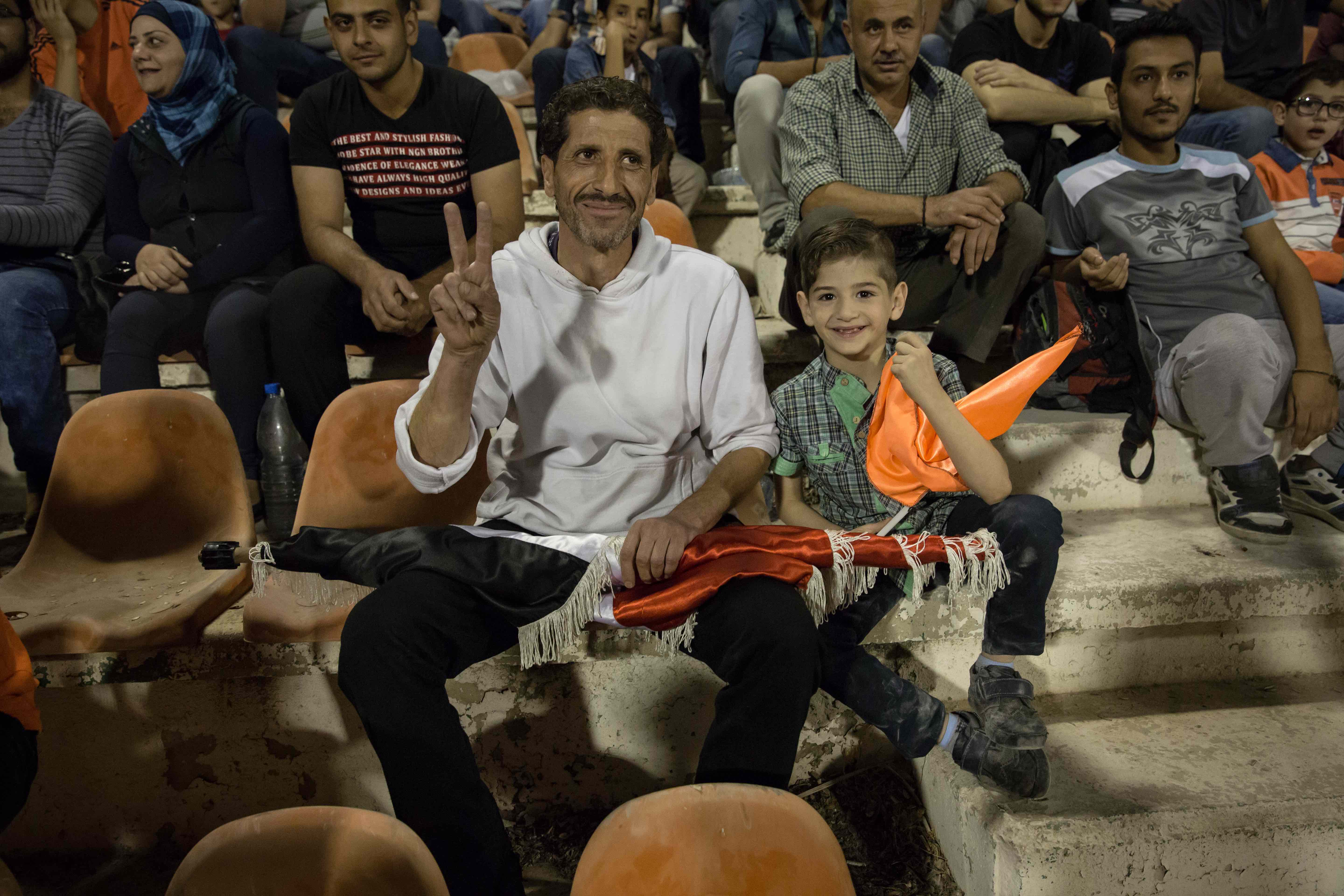 A father and son watch the match from the stands. Many parents said they are still too afraid to bring their children to games.

Fouad Ibrahim, a 55-year-old local who has been attending matches in Damascus since he was 15, watched much of the game beside me, standing up with one hand grasped over his mouth. He said he still isn’t comfortable bringing his children with him. But the stadium, and the routine of football, brought him comfort.

Closer to the pitch were young boys, jostling for the best view, while near the top of the stands were families, some sucking on shisha pipes, their inhalations visibly deeper at the moments the play became tense.

At one point firecrackers were set off nearby. I jumped, and a man beside me laughed. 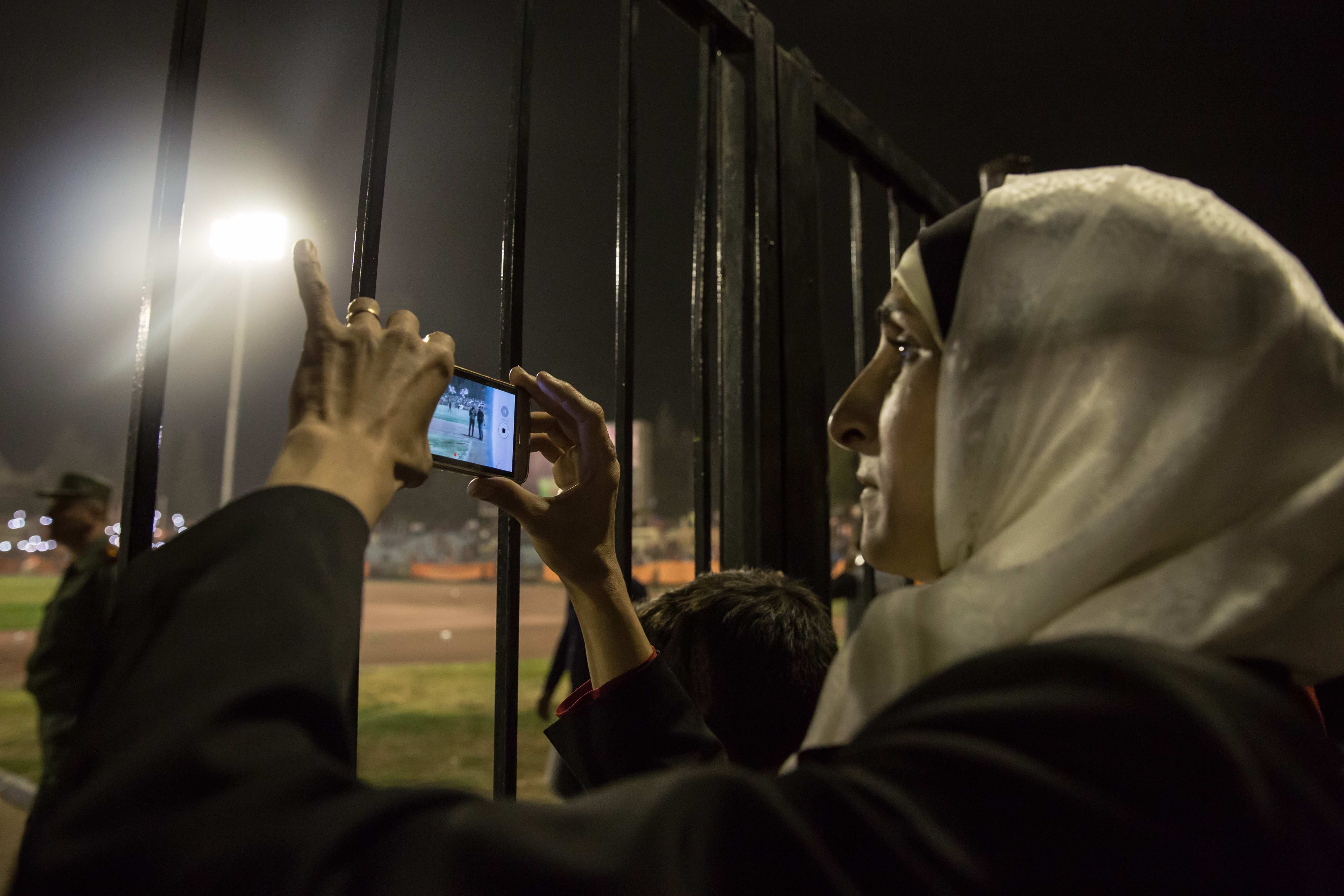 A woman films the pitch. On her phone screen soldiers are more distinctive than football players.

“Russia, Russia, we love you,” a group of young boys yelled at me as I walked in front of them – thinking I must be one of the regime’s military allies. They posed for a photo in front of a large portrait of Bashar al Assad, then giggled.

There’s a school of thought that you shouldn’t portray daily life in government-held Syria. If you do, you’re whitewashing war crimes: chemical attacks, systemic torture and rape, or barrel bombs that flatten houses and murder civilians. That is the reality of Syria today. But it’s also true that in both opposition and government-held areas, people are grasping for some moments of relief – and football is one thing they turn to. 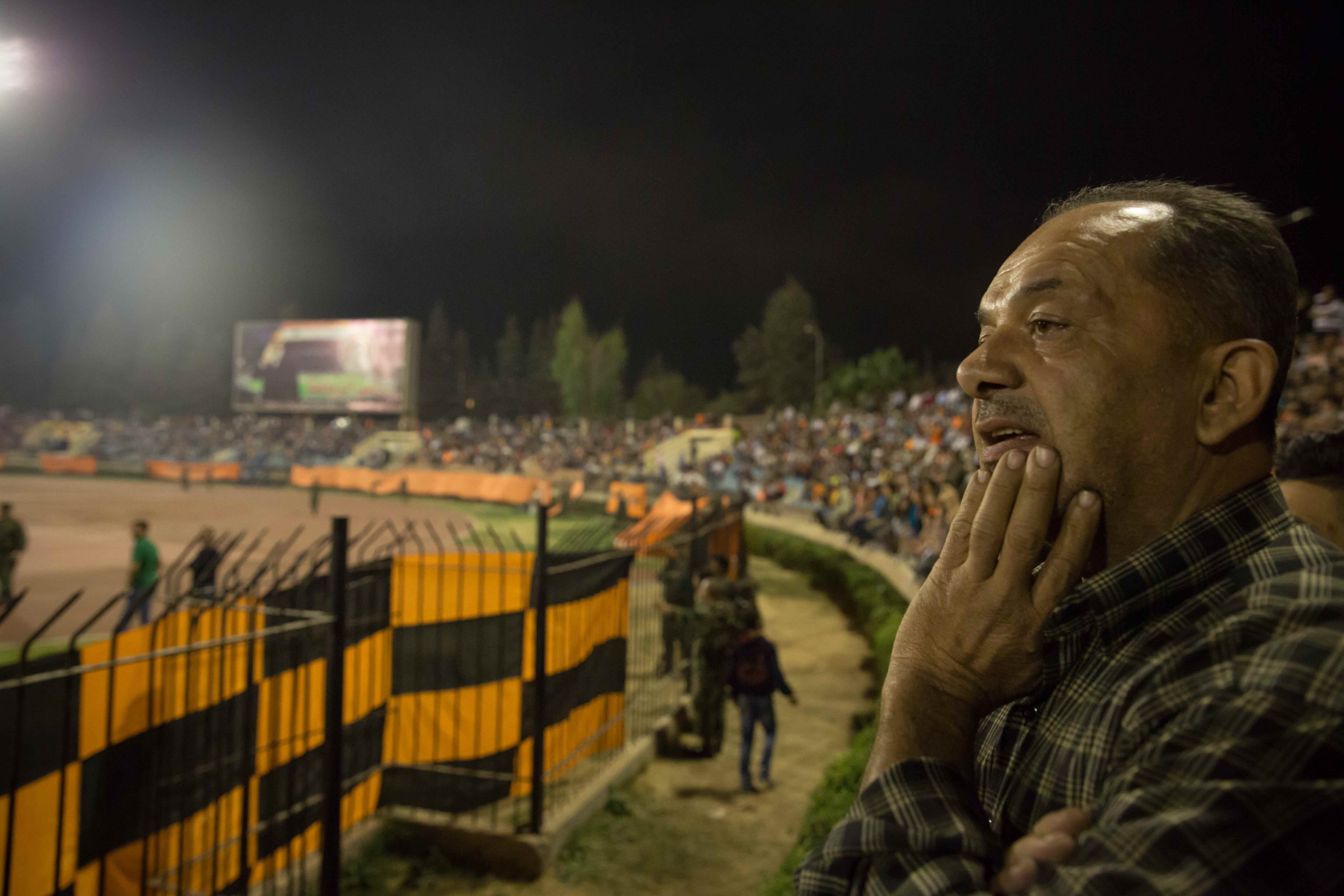 Fouad Ibrahim, a 55-year-old local who has been attending matches since he was 15, said the routine of football has brought him comfort during the war.

In Homs, a few days later, I stumbled across a game played by teenagers with mental disabilities, who had been locked up in their houses for years when the fighting was heavy. Now, they needed activity, and were playing football to release some of their trauma. In central Aleppo, I saw an even sadder sight: two homeless children kicking an empty plastic bottle between them on the street in near darkness, while jumping up and down for warmth.

When I got back to Europe, I spoke about the attending the football match with a Syrian refugee who had fled after being imprisoned for protesting. I was surprised at his excited response. He asked if had I gone to the nightclubs in Damascus, if had I eaten good food, and if I had witnessed how friendly people are. For Europeans, he said there’s a real need to show what Syrian civilian life is like. “Now you can see we’re not ISIS.” 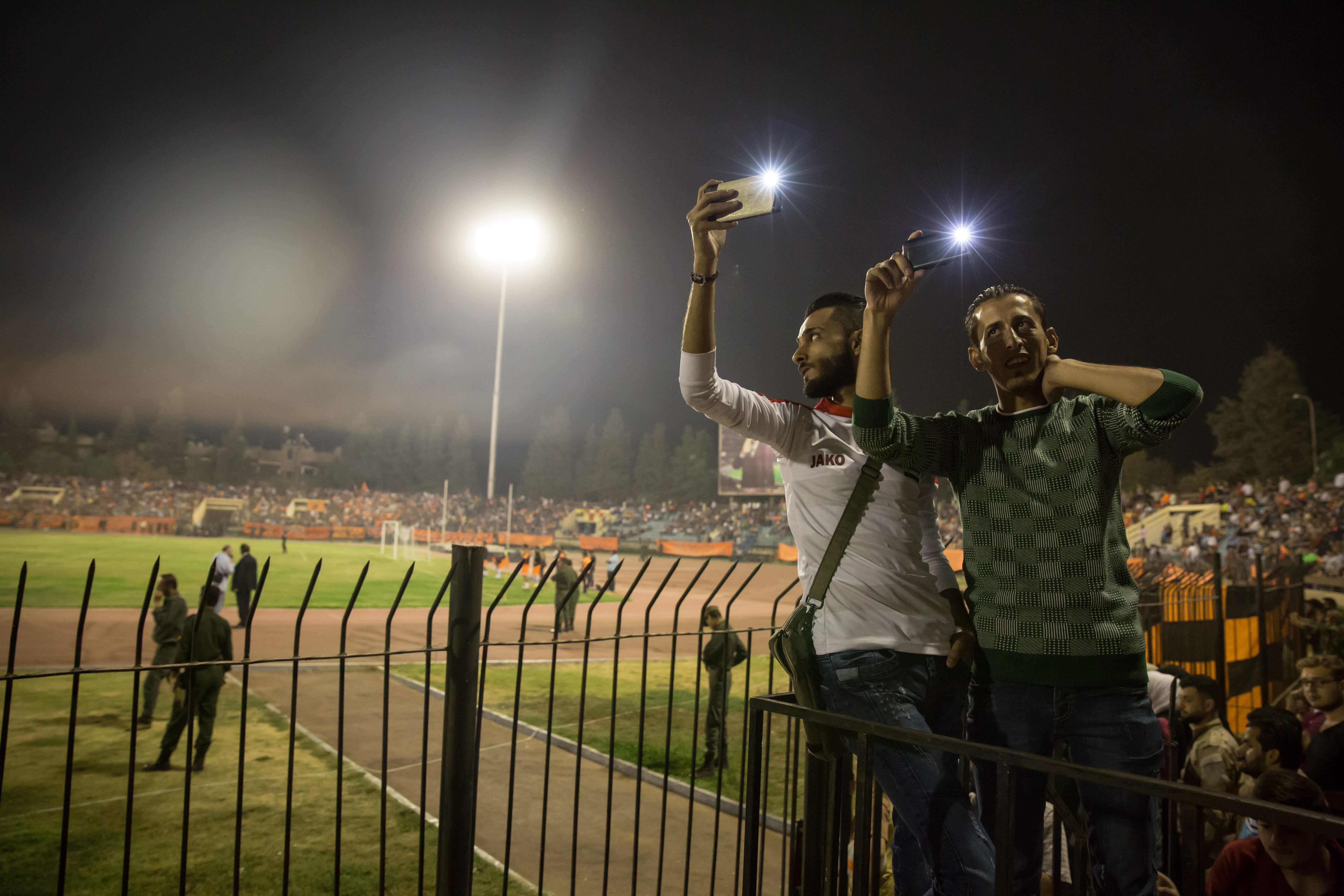 Two men film the fans in the stalls. For years, crowds this size wouldn’t have gathered together because the security risk was too high. 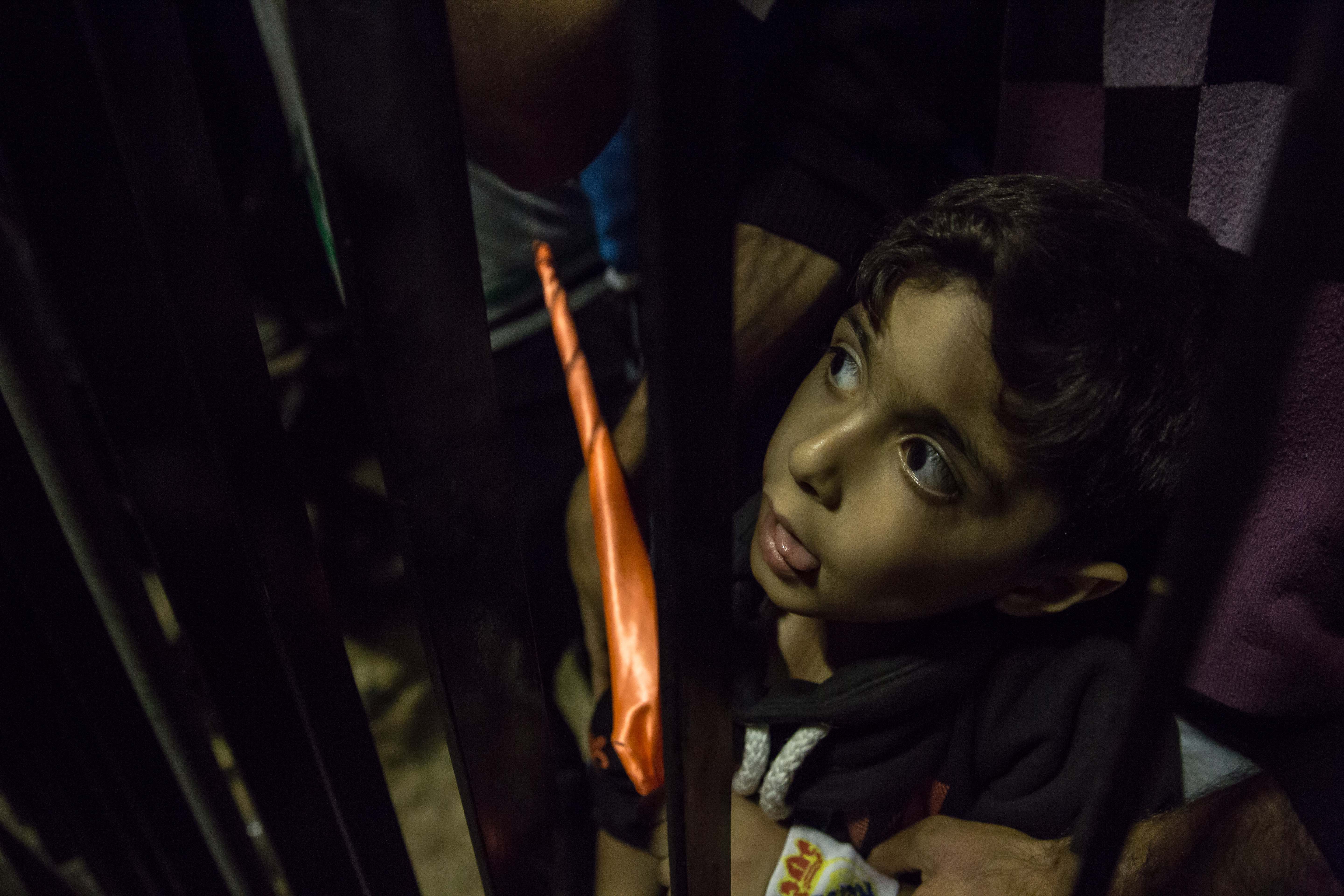 A boy gazes through bars at the game in Tishreen Stadium. 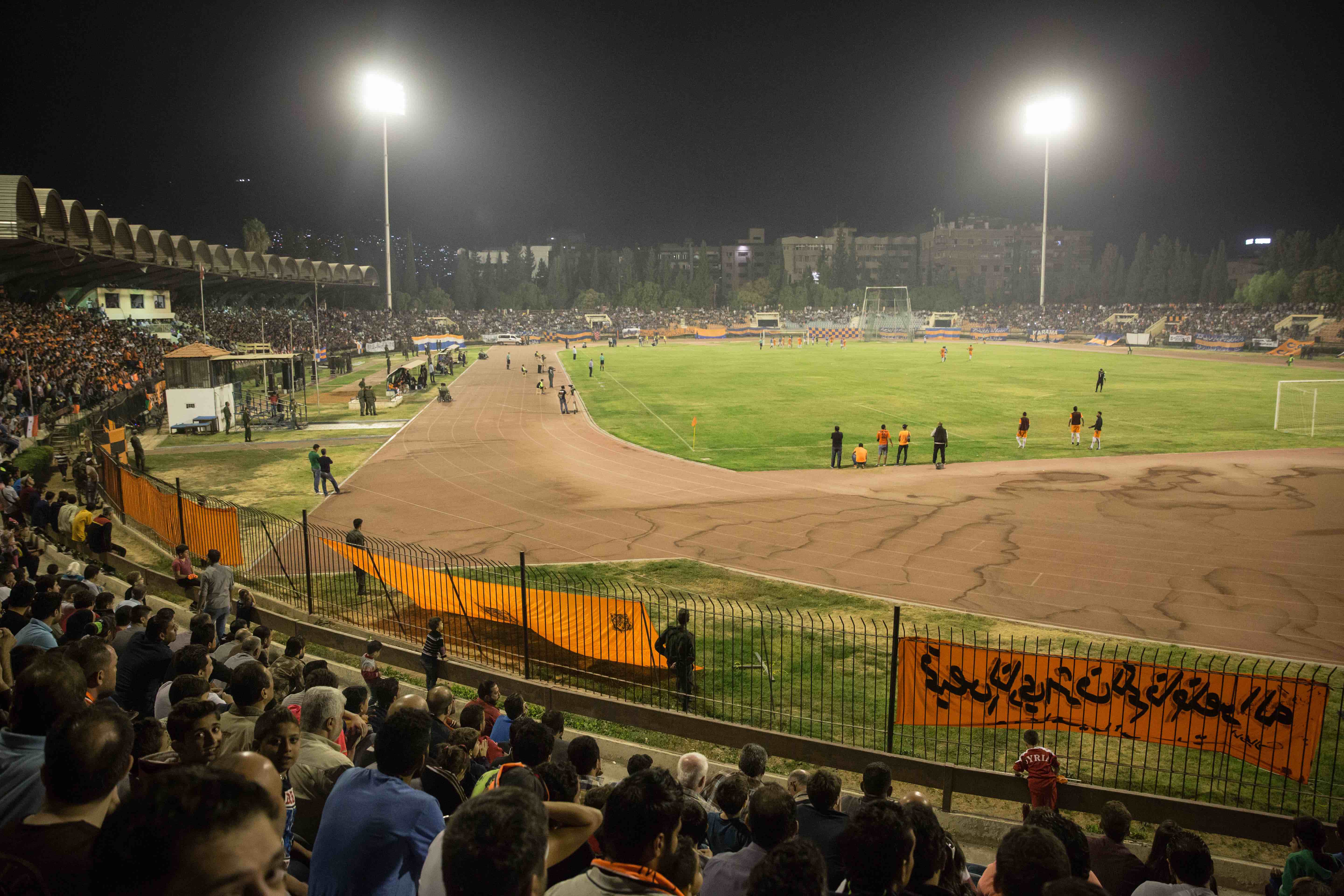 Al-Wahda from Damascus and Al-Karamah from Homs play in Tishreen Stadium in the Syrian Cup Final, October 2017. 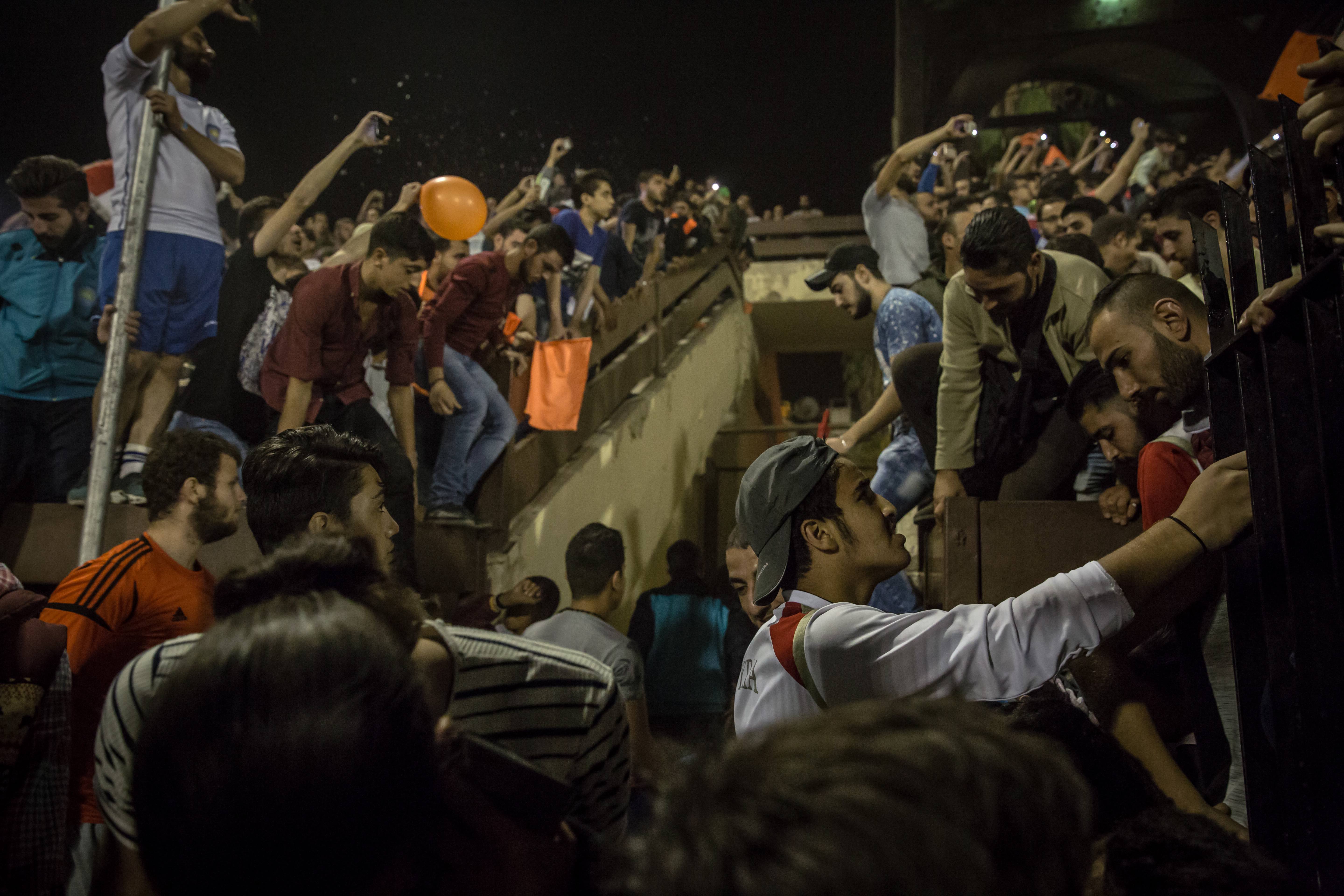 Crowds leave the stands after the Syrian Cup final in Tishreen Stadium, Damascus. There were a few scuffles but nothing major. 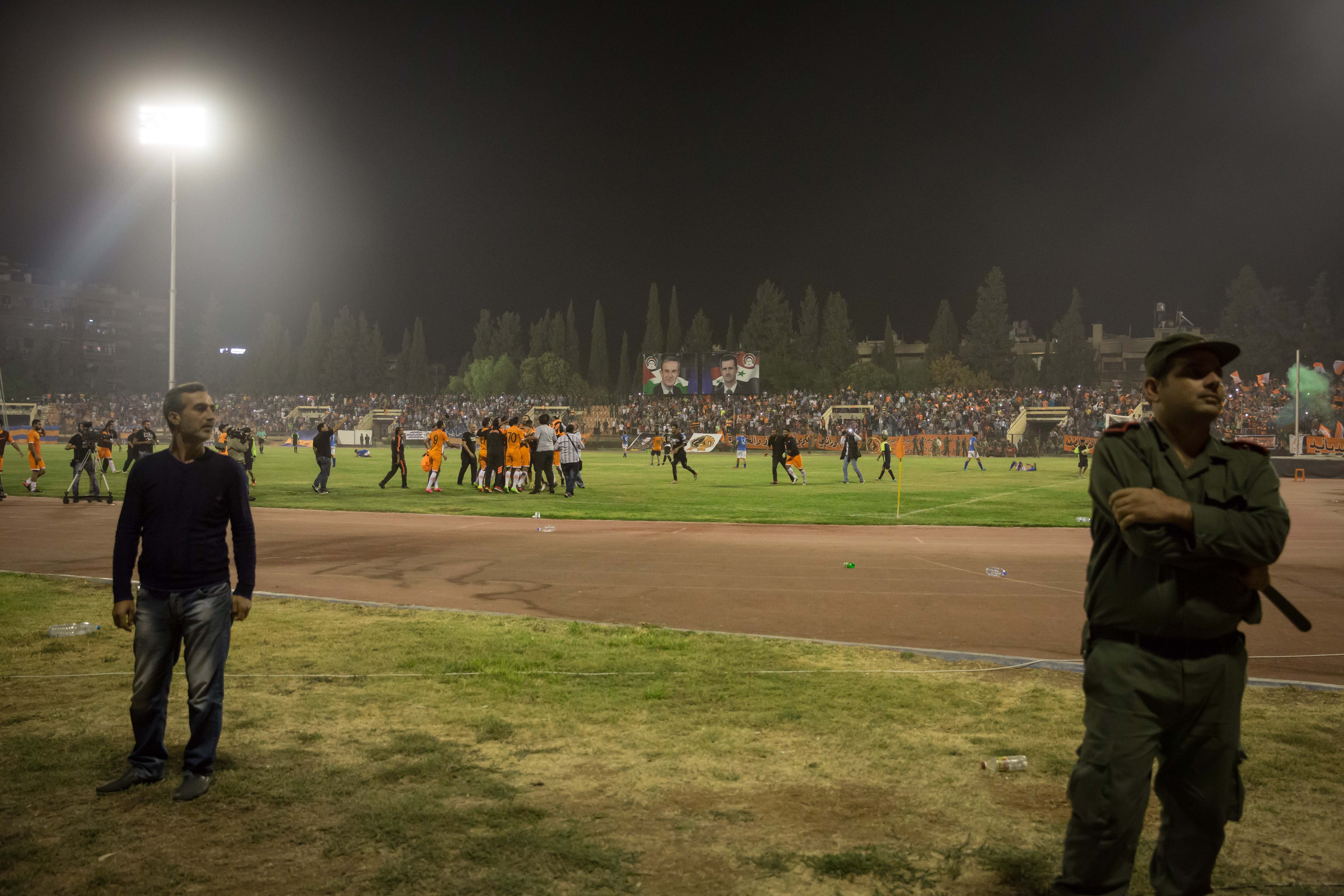 Soldiers stand guard as Al-Wahda from Damascus celebrate their victory in the background. 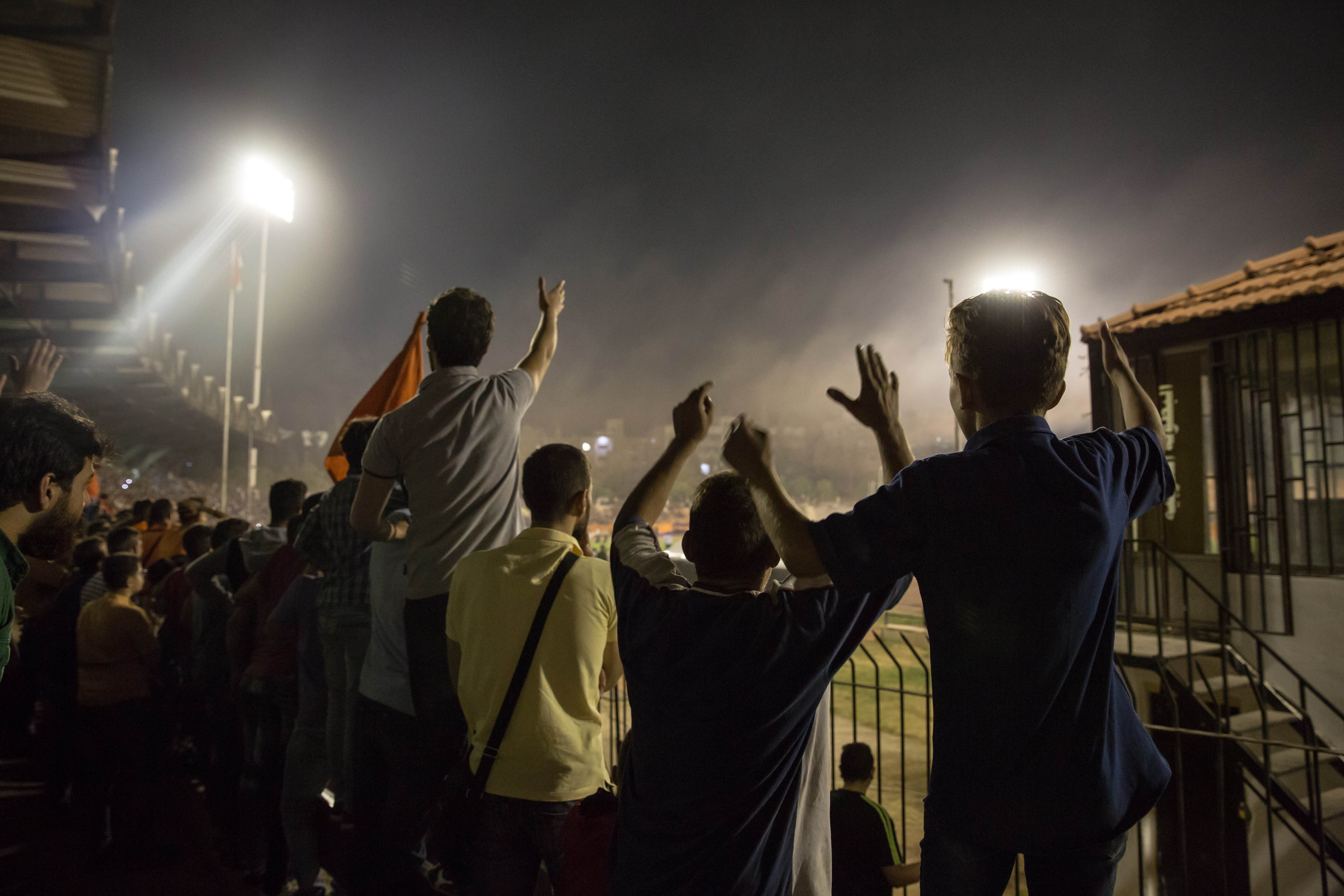 Linkedin
RELATED ARTICLES
OTHER ARTICLES
The idea that a younger generation is abandoning work has become a popular narrative online, but it doesn’t necessarily reflect reality.
Yesterday thousands gathered outside Buckingham Palace after news of the Queen’s death broke.
Financial turmoil is pushing people who work in the sex industry into more dangerous and desperate situations as a means of survival.
Birdy Chu reflects on documenting the historic moment in which the territory was formally passed back from the UK to China.
With skyrocketing rents, packed out viewings, bidding wars and more, renting in London has never been harder.
A group of young Palestinians have found temporary freedom in the act of parkour, reimagining wreckage and ruins as a series of high-octane playgrounds.