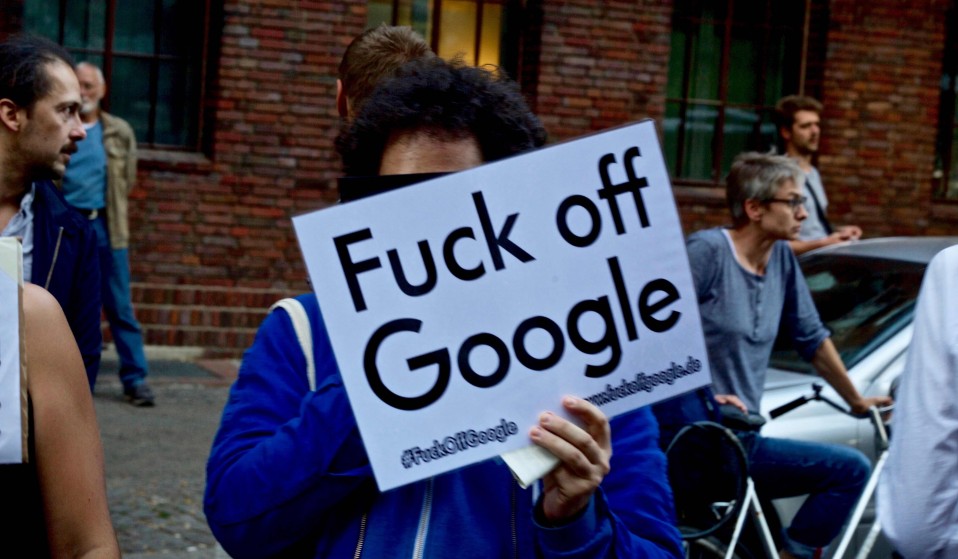 A Google Campus is due to open in a 2500m² complex in Berlin’s popular Kreuzberg neighbourhood, but as locals fear exploding rent prices and continued gentrification amidst Berlin’s burgeoning start-up scene, an anti-Google alliance is fighting against the tech giant both online and on the streets.

A Google Campus is due to open in a 2500m² complex in Berlin’s popular Kreuzberg neighbourhood, but as locals fear exploding rent prices and continued gentrification amidst Berlin’s burgeoning start-up scene, an anti-Google alliance is fighting against the tech giant both online and on the streets.

It’s a hot June evening in Berlin, and locals and tourists alike are wandering through the cobblestoned streets of Kreuzberg, one of the city’s most vibrant and multicultural neighbourhoods. While passersby stroll alongside the idyllic Maybachufer canal or across the lively Görlitzer Park, dining tables are being set up in the streets for open-air banquets. There are murmurs of the World Cup, and the talk of the town is of the next big game.

But for Kreuzberg residents, the big game isn’t against a World Cup team. Instead, theirs is an ongoing opponent that has become synonymous with the area’s widespread gentrification: the tech-giant Google.

The big tech company announced back in November 2016 its plan to set up a Google Campus inside the Umspannwerk, a 2500m2 complex on Ohlauer Straße, and to eventually move in after this summer. The Campus would be the company’s seventh in the world and, as its website affirms, would become a space “for entrepreneurs to learn, connect, and build companies that will change the world.”

But although Berlin’s mayor Michael Müller welcomed the announcement, locals have become increasingly frustrated. “Everything [start-up companies] are bringing the people in this community could do themselves,” explains Ulrich Hardt, Kreuzberg resident since 1982 and director of the Theatre Expedition Metropolis. “They have no idea of the history of this place. We have no need for people from Silicon Valley here.” 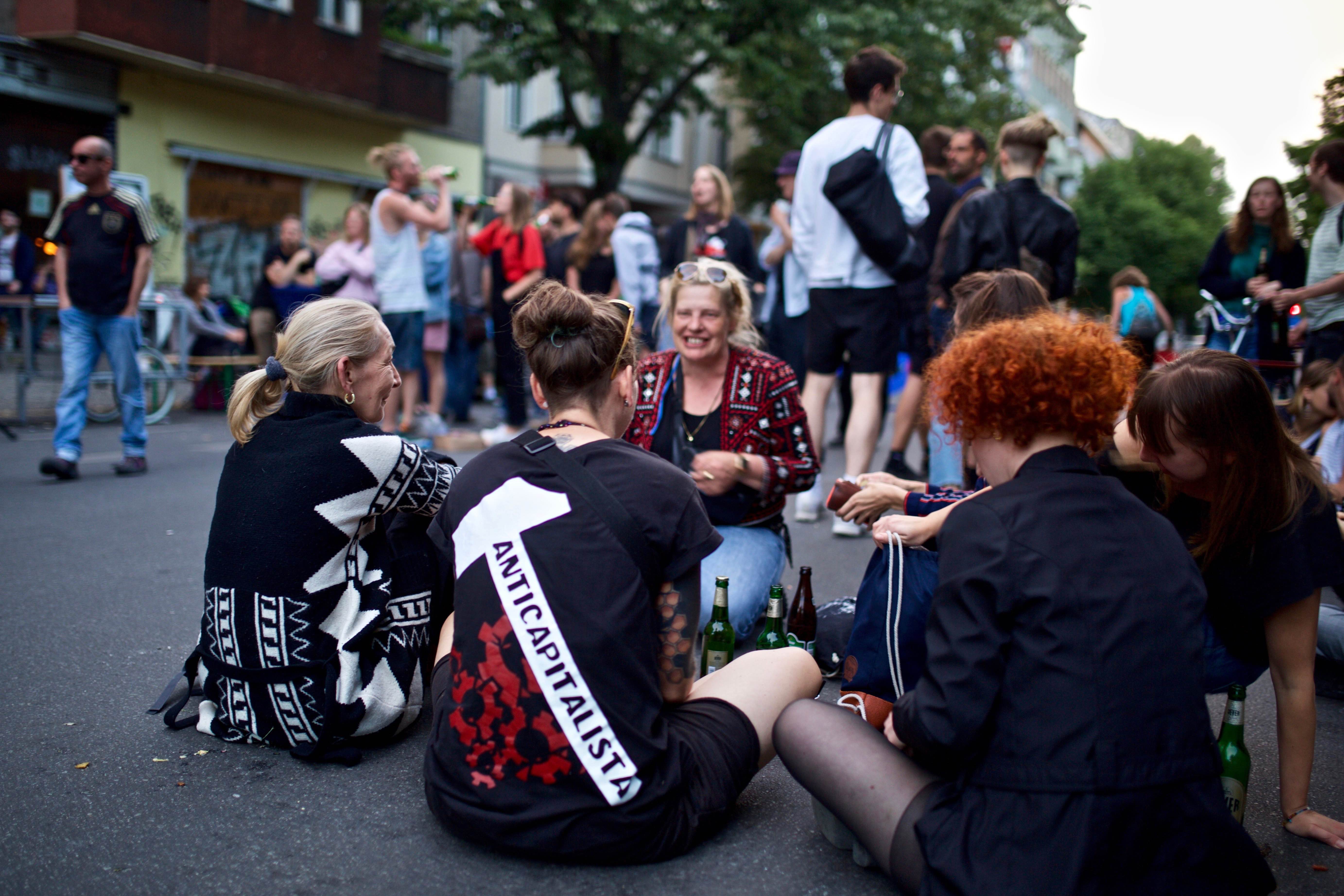 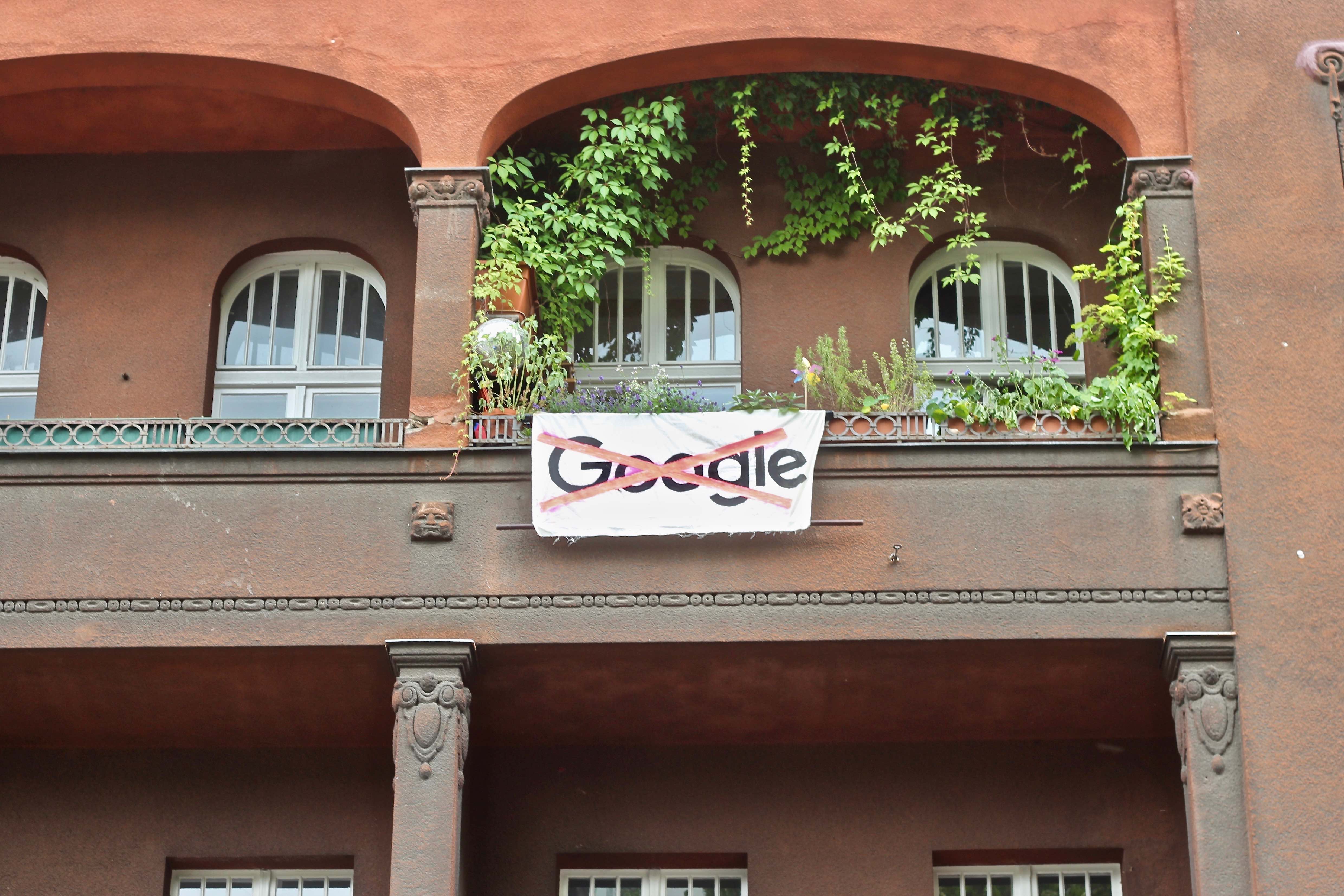 Berlin has increasingly been hailed as London’s successor to become Europe’s start-up capital in light of the Brexit chaos and has even been deemed “the EU’s new Silicon Valley,” suggesting that from a business and tech perspective, the move for the Google Campus made sense. What’s more, Kreuzberg itself already hosts the tech giant Zalando and Factory Berlin, the latter self-proclaiming itself as “Europe’s biggest club for start-ups.”

Yet for Berliners, comparisons to Silicon Valley will stand out as more ominous than flattering. Property prices in the city have jumped up an enormous 20.5 per cent in 2017 alone, making Berlin the city with the fastest-rising property prices in the world. As Stefan Klein, a lawyer turned activist who now leads the neighbourhood initiative GloReiche fighting gentrification, declares unswervingly: “The Google Campus will transform our neighbourhood so enormously it is hard to imagine. We can only compare to San Francisco to see the effects.”

Still, Google’s plan to open a Campus in Kreuzberg, one of the city’s hotspots for nightlife and with an enduring tradition of leftist and anarchist subcultures, was always going cause trouble. Since its initial announcement a year and a half ago, the fight against Google has seen regular events set up by an organised group of anti-gentrification activists and anti-corporate hacktivists that have formed the superhero-sounding ‘anti-Google Alliance.’ 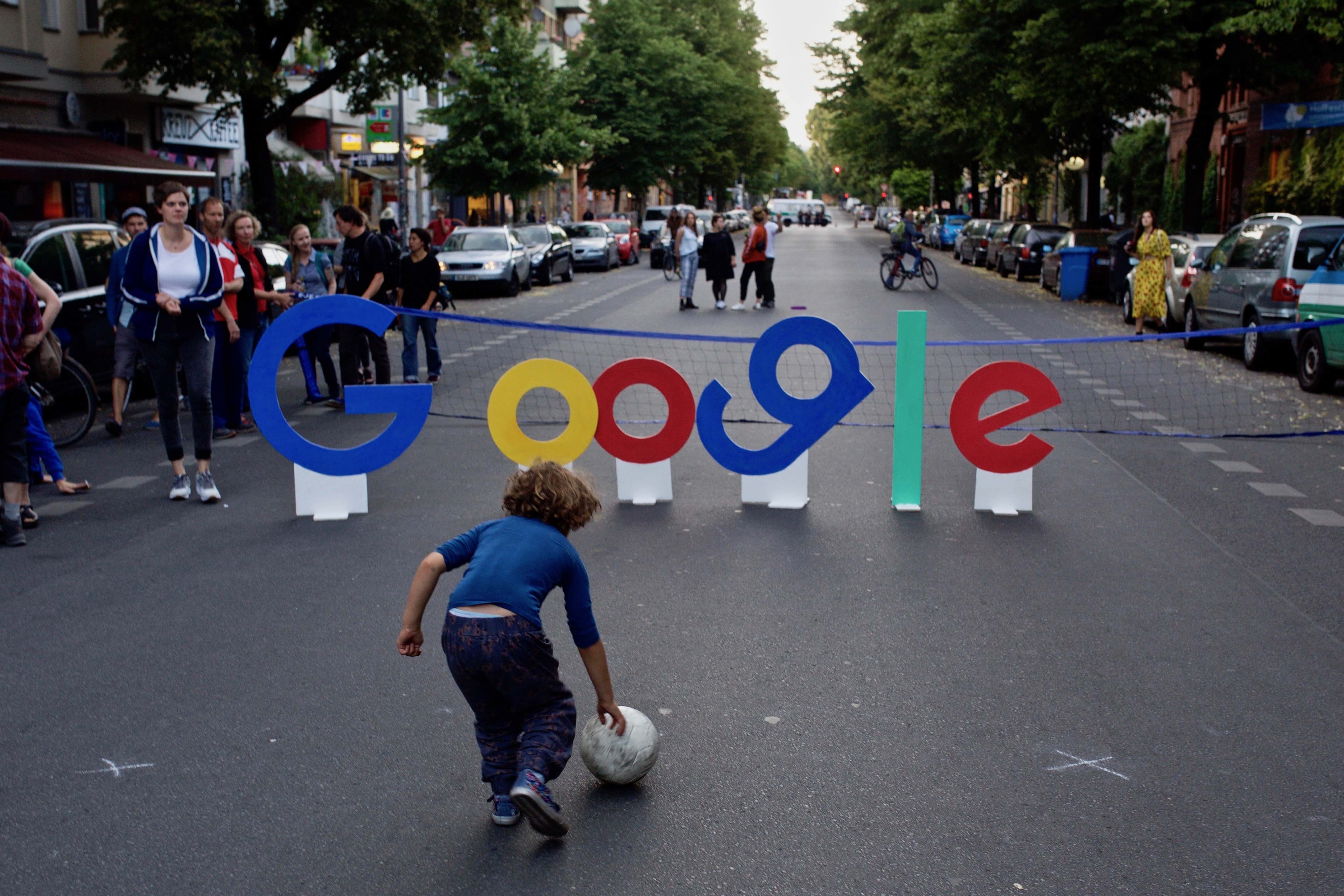 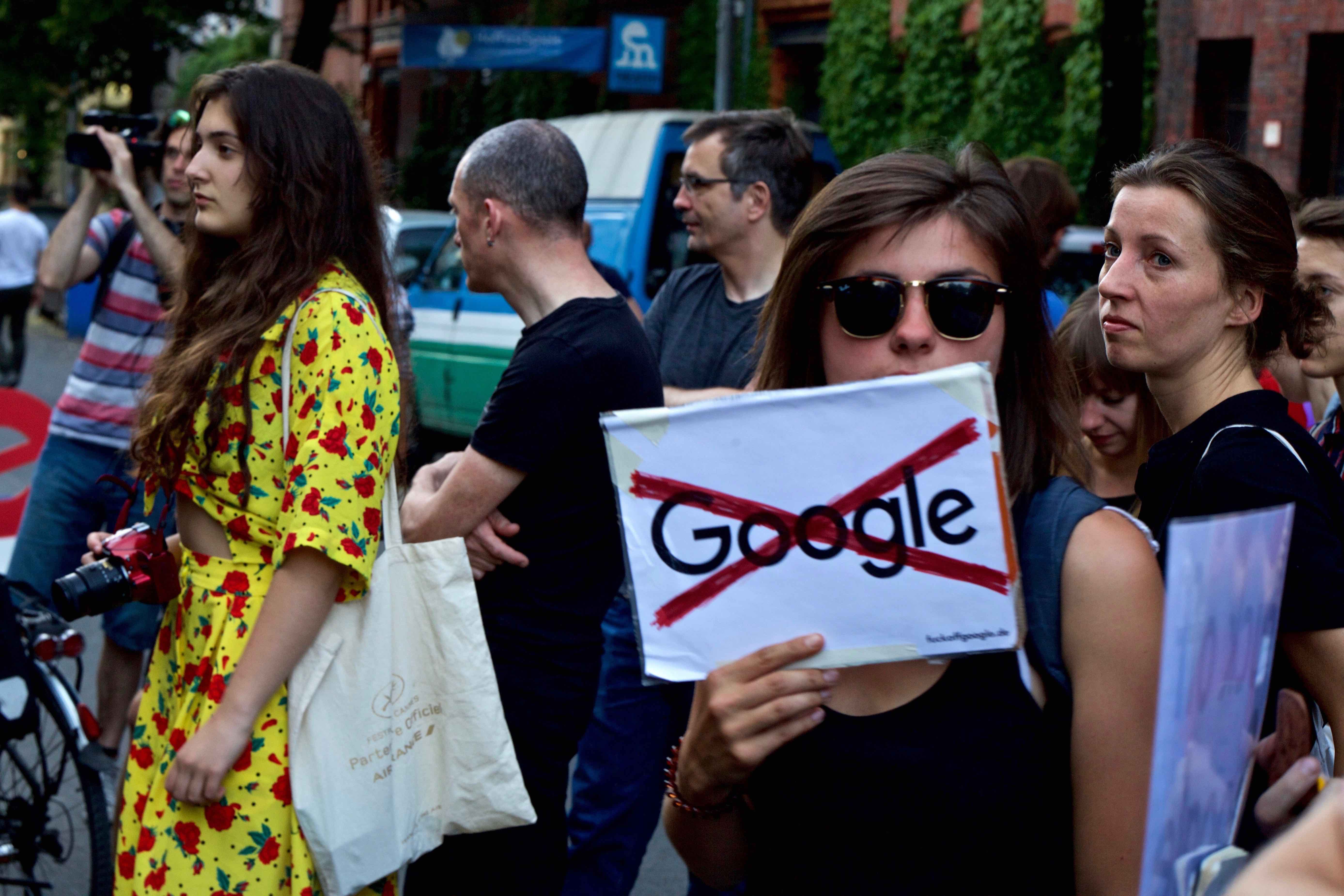 One of these events happened to coincide with the start of the World Cup, and was headlined as “Kick Google aus dem Kiez” (“Kick Google out of the Neighbourhood”). Close to a hundred people turned up to listen to speeches by locals and activists switching between German and English in typically Kreuzberg style, while families played political football in front of the Umspannwerk and browsed through leaflets listing alternative search engines to boycott Google.

Stefan Klein’s GloReiche, and other neighbourhood initiatives Lause Bleibt and Bizim Kiez, all attended the event. The three initiatives are no strangers to fighting Kreuzberg’s prevalent gentrification. Previously, they successfully defended both the beloved bakery Filou and the corner-shop Oranien-Späti from eviction after initial pressures from London-based owners and big real estate companies. “After we saved the bakery and Späti we [the three initiatives] decided to take on Google,” Klein says, unflinchingly. “We are fighting for our Kiez [neighbourhood].”

However, the three initiatives knew that the big tech company was a different beast to previous opponents. As such, varied participants have taken interest in this battle that is turning out to be the David vs. Goliath of the digital age, in a scenario where David comprises of society’s modern outcasts and rebels: anarchists, hackers, activists and anti-capitalists. 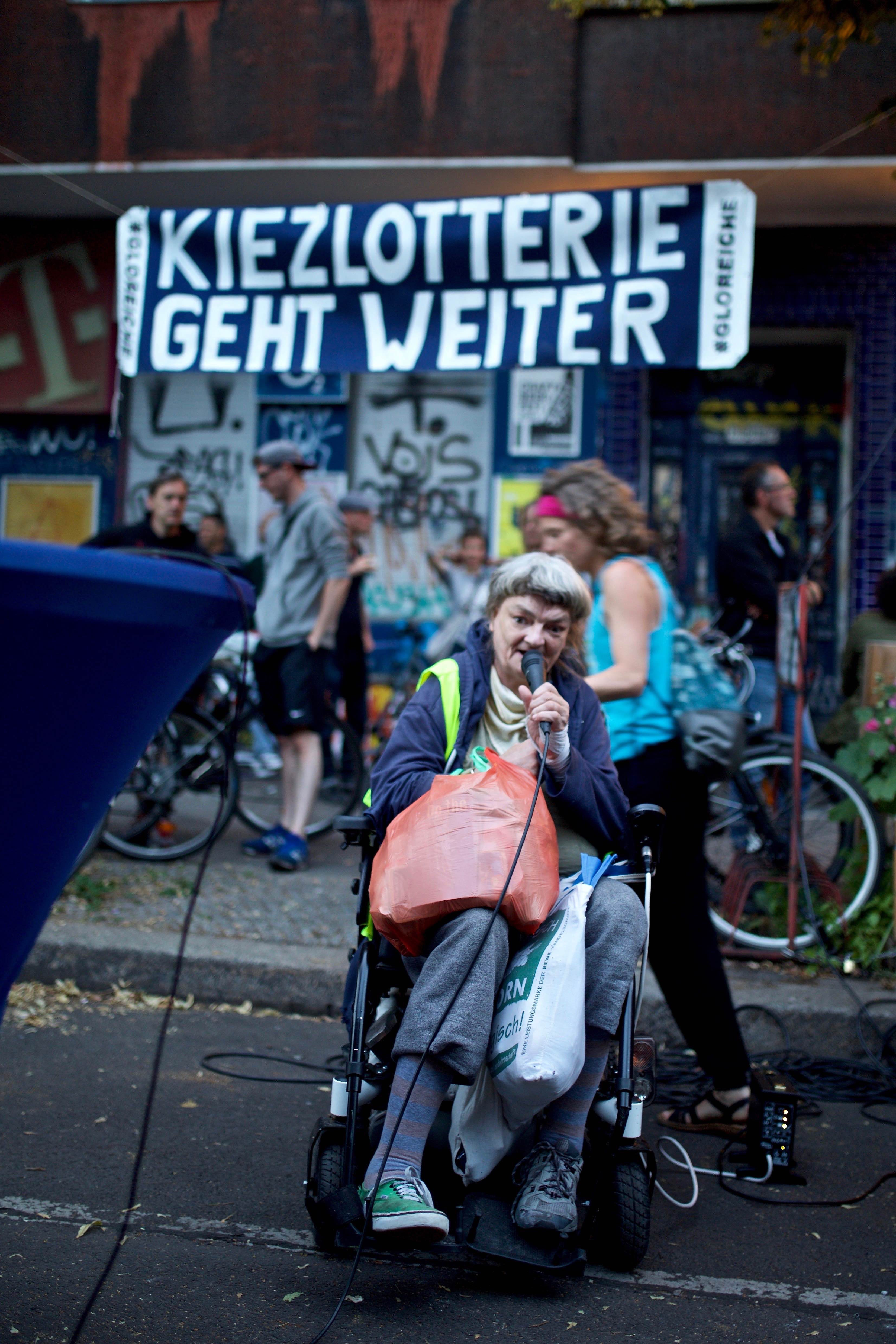 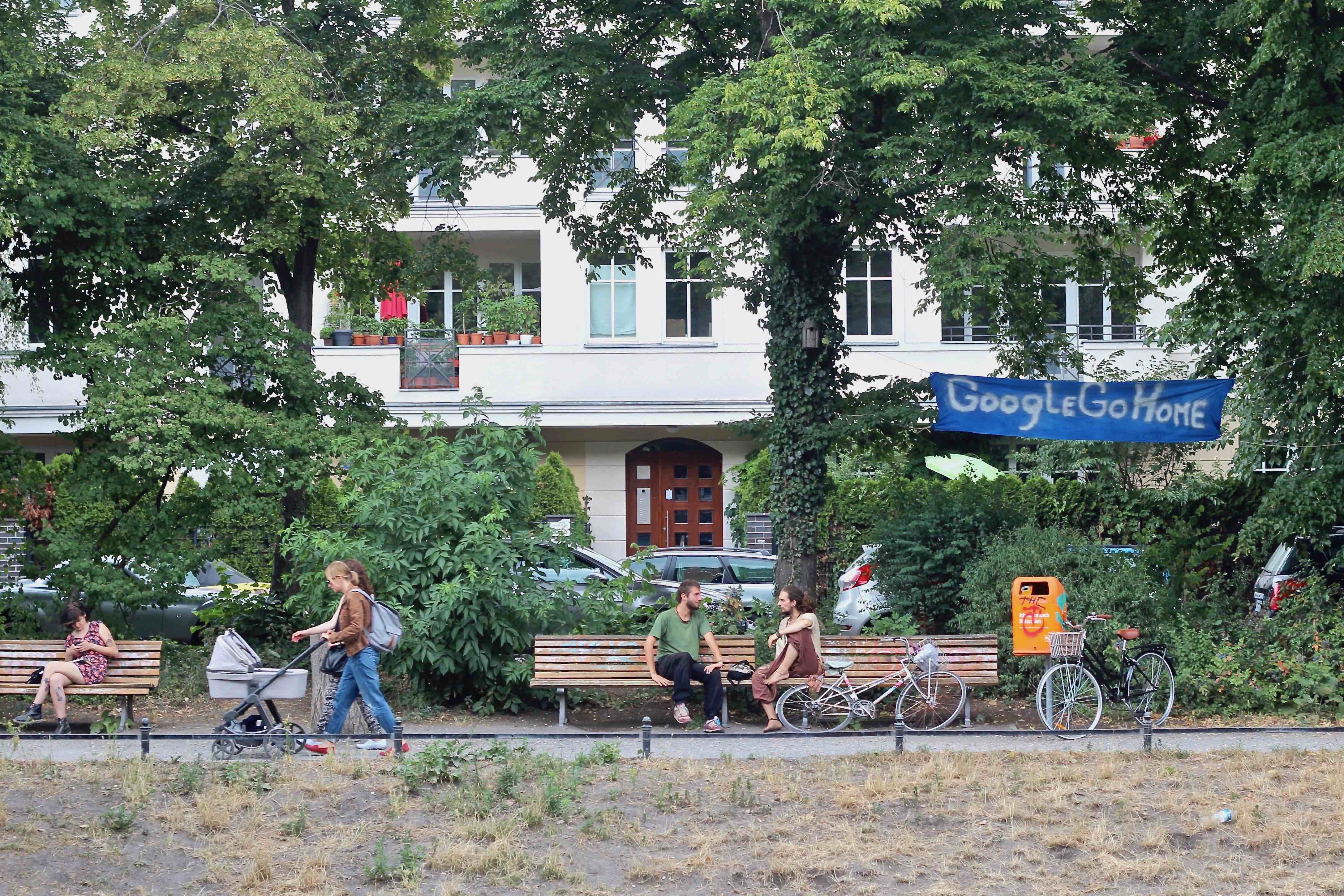 The anti-Google alliance is not only spreading its message through demos – it’s also rallying support through talks held at the anarchist library turned anti-Google café Kalabal!k every 2nd and 4th Saturday of the month, through revolutionary guidelines circulated in the Shitstorm newspaper, and online through the fuckoffgoogle.de website set up by hacktivists.

As it gathers support from international campaigners, it’s clear that the anti-Google alliance is spreading both online and offline because it confronts not only the issue of gentrification but also safety and privacy. As a hacktivist behind the fuckoffgoogle.de website declares openly at the Kick Google Out event: “We’re not just opposing any company. Google practises mass censorship and surveillance. Its smart city concept has an imperialist agenda. With your help, we can build evidence and a network of solidarity both online and in our neighbourhoods to say: ‘fuck off Google!’”

As the anti-Google alliance continues to gather momentum in Berlin, it’s safe to say that the tech giant will face continued opposition even if it ultimately moves in. “We’re not against start-up employees,” maintains Konstantin Sergiou, a member of Bizim Kiez. “We’re against companies like Google that feed off growth and displacement. Even if the Google Campus comes here this place will always be haunted.” 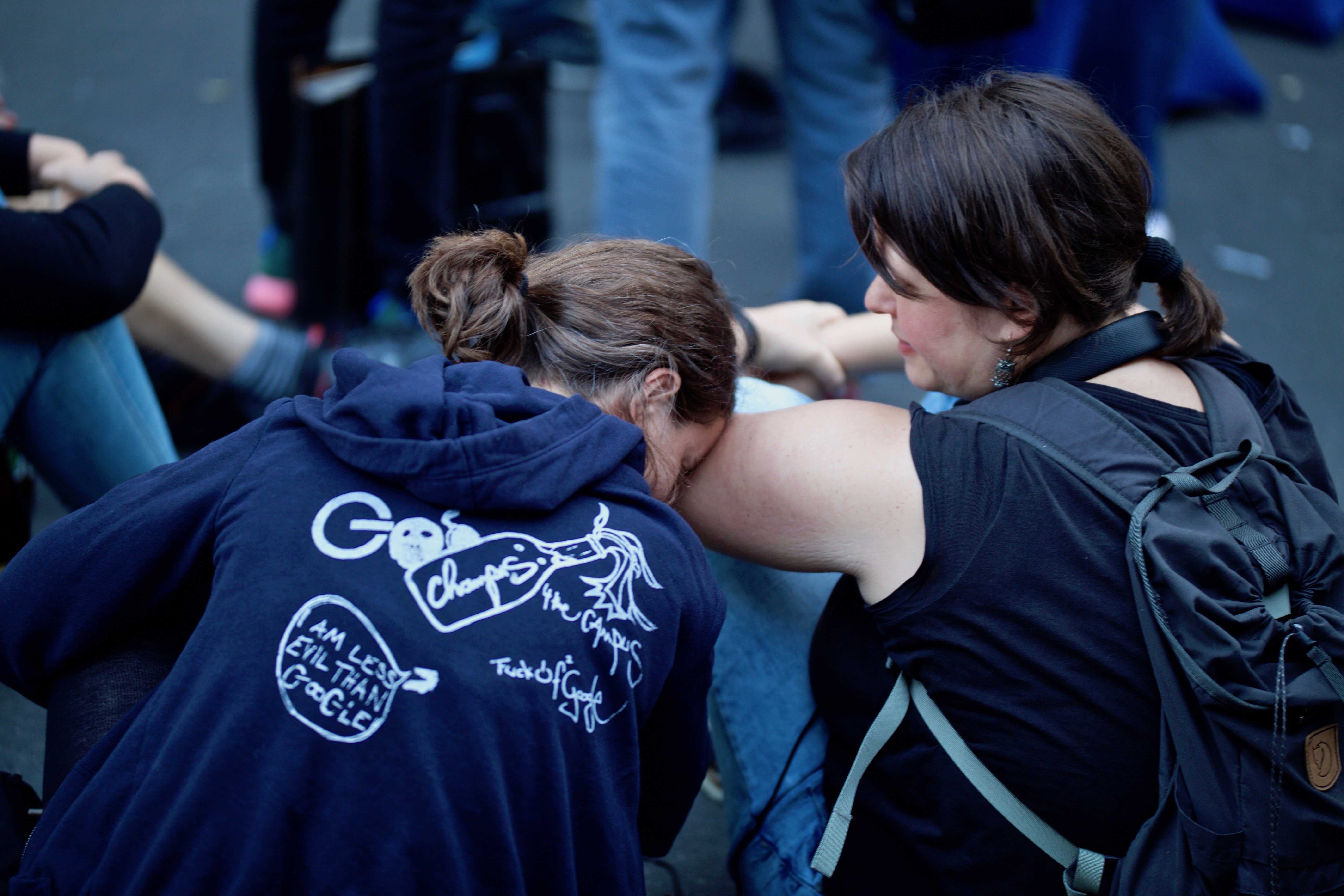 Linkedin
RELATED ARTICLES
OTHER ARTICLES
Activists and campaigners are fighting back against new laws that would seriously undermine the ability to take industrial action, calling it an attack on fundamental workers' rights.
At his West Bank restaurant, Fadi Kattan established himself as the voice of modern Palestinian cuisine. Now, he’s bringing his innovative, bold flavours to the UK’s capital.
A new law change is enabling Britain’s donor-conceived children to know the truth about their origins – but campaigners say the fertility industry must do more to protect people.
Since 2007, Gideon Mendel has made 20 trips to document floods in 13 countries. The result is an alarming record of what has already been lost to the climate emergency.
After building his reputation covering the US civil rights movement in the 1960s, the photographer went on to produce some of the most enduring images of the past century.
Following the release of his debut single, Deyaz talks battling addiction, dealing with his struggles through music, and building a budding music career from his living room.