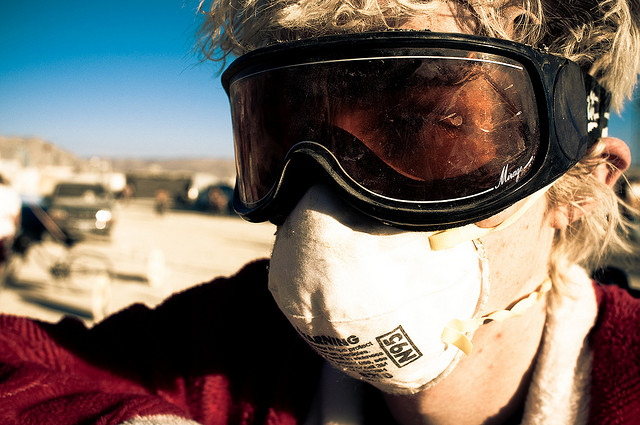 Wearing googles—and at times little else— the American short-story and non-fiction writer experiences the annual California desert counterculture festival by making a road trip for his father and couple of elderly pals in this selection from The Best American Essays 2014.

I’m a sucker for annual “best of” anthologies and one Christmas gift I haven’t been able to put down is The Best American Essays 2014 edited by Pulphead author John Jeremiah Sullivan. It has great personal pieces by the likes of Dave Eggers, Yiyun Li and Zadie Smith. One of the standout pieces is Well Tower’s cross-generational adventures at the post-apocalyptic Woodstock that is Burning Man.

In one of the pieces’ many great father-son scenes, Tower junior and Tower senior —after being in desperate need of a shower— emerge into the dessert in their goggles from the Human Carcass Carwash only instantly be “battered like fish sticks in alkaline dust.”

The piece was originally commissioned by GQ and is available on their site. If you’re looking for some respite from your own family adventures over the holidays, this is our prescription.

The Best American Essays 2014 is published by Houghton Mifflin Harcourt.

Linkedin
RELATED ARTICLES
OTHER ARTICLES
Birdy Chu reflects on documenting the historic moment in which the territory was formally passed back from the UK to China.
By turning a real-life crisis into daytime television fodder, TV bosses have once again shown themselves to be completely out of touch with audiences.
Rhiannon Adam spent three months capturing an ageing society wracked by division, isolation, and the aftermath of scandal.
Following the announcement of an 80% hike in the energy price cap from 1st October, crowds gathered outside the offices of energy regulator Ofgem to protest and declare their intention to undertake a payment strike.
For over a decade, gamblers have won big by employing people to place live bets from the court. But does this dubious method still work?
Financial turmoil is pushing people who work in the sex industry into more dangerous and desperate situations as a means of survival.